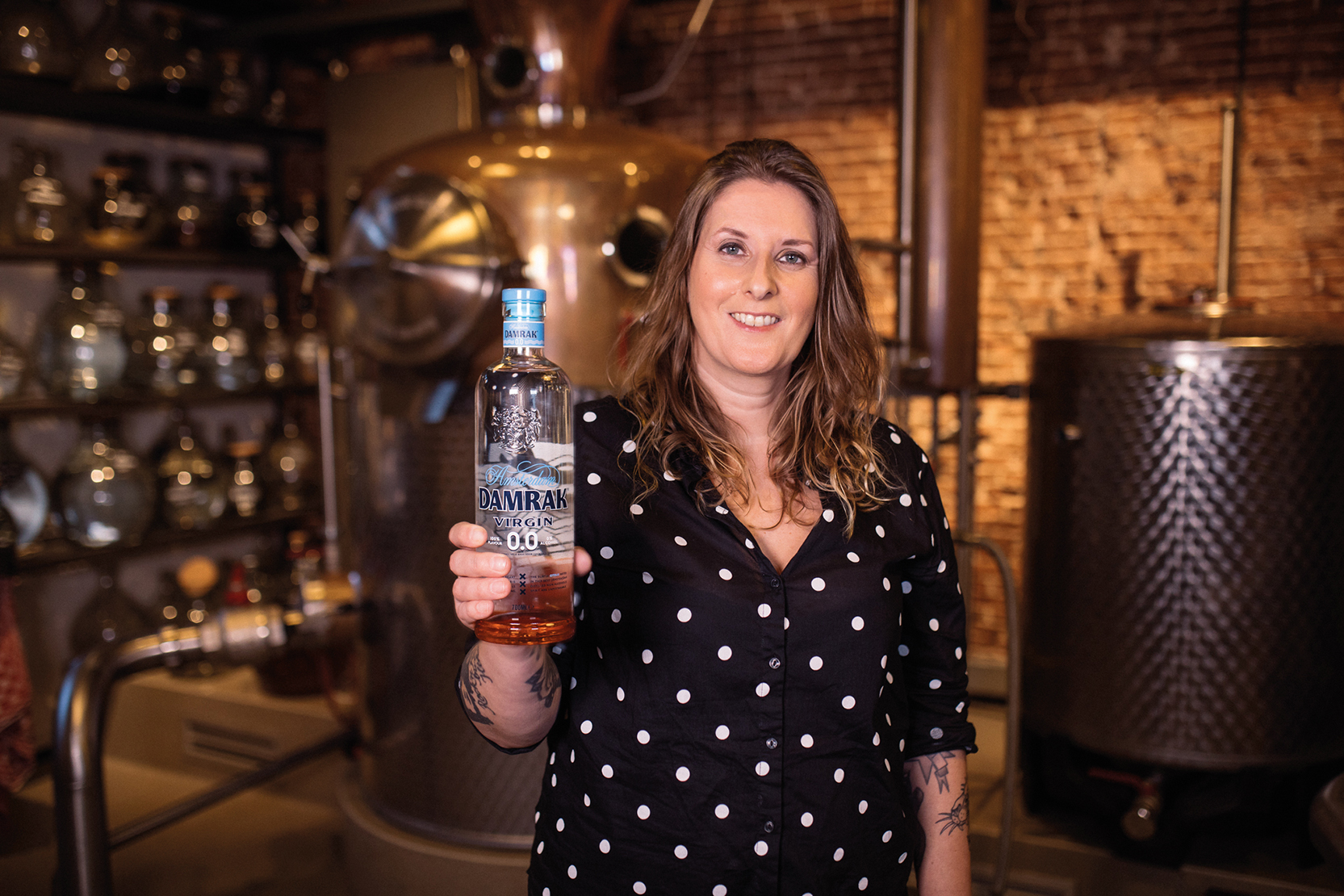 It didn’t take Piet van Leijenhorst long to recognise Monique ten Kortenaar’s exceptional “tasting and smelling” genes, as well as her affinity for drinks and product development. Shortly after she joined Lucas Bols as quality manager in 2013, it became clear she was headed for a career in distilling. Van Leijenhorst played a big role in convincing Ten Kortenaar to start this new, rewarding chapter of her career.

She has now been directly involved with the production of Bols and Wynand Fockink products for the past five years, perfecting her craft under the tutelage of the company’s revered master – not just distilling genever, but also liqueurs, non-alcoholic spirits and gin such as Damrak. As head distiller and distillery manager she’ll be playing an important role in keeping the legacy of the Bols brand alive – a task she is wonderfully equipped for.

And what a legacy it is. Lucas Bols is one of the oldest distilled spirits companies in the world. The original Bols family hasn’t been involved since the early 19th century, but when the family sold the company in 1816, they did so on the condition that their name would be used on all its products in perpetuity, ensuring the family’s legacy for centuries to come. For instance, the current Bols Genever Original is based on a recipe from 1820. It has a high maltwine content of 60 per cent, made from corn, rye and wheat. Of course, a range of botanicals is used, such as juniper, coriander and hops, but also a secret one that Ten Kortenaar won’t divulge, except that it “gives a tingling sensation on the tongue. I think it is perfect in a mixed drink or cocktails like the Negroni.”

Ten Kortenaar might inherit the Lucas Bols legacy, but she also has her own interesting backstory, starting with her grandfather Jacob, who used to work as a perfumer. It is him she has to thank for her impressive sense of smell, but he also first introduced her to genever way back. “What I love about genever is its maltiness, the well-balanced botanicals, the history of genever and the various types within the category, like the Bols Barrel Aged Genever for example, which is actually my favourite,” she says.

Over the course of her career, which now spans almost 25 years, Ten Kortenaar has worked as flavourist assistant, product developer and sensory panel leader at global company Givaudan. Before joining Lucas Bols, she had been involved in the development of beverages including beer, liqueurs, flavoured vodka and non-alcoholic drinks, and also studied brewing in Germany. Distillation was something new, but she barely hesitated when presented with this challenge by Van Leijenhorst: “I’ve never regretted accepting a position as distiller. It is even better than I thought.”

While Ten Kortenaar emphasises that working in a distillery is not as romantic as people might think (“There’s a lot of physical labour, but paperwork as well”), it has its romantic qualities nonetheless. “Distillation comes with a lot of technological and chemical knowledge, but is also an art. The result of your work as a distiller might not always be what you expect. Often it is all about taste, smell and taking the right fractions. You might think you know all about chemistry and botanicals, but what works theoretically doesn’t always turn out that way. I love the science behind distillation and can be quite nerdy, but the artistic side is at least as interesting.”

While there are many responsibilities, being head distiller also comes with perks. One process Ten Kortenaar is working on is that of producing a peated genever. She has a great fondness for Scotch whisky and in the past has done limited runs of a smoky genever called Wynand Fockink Lage Landen Jenever. Making it is laborious, which is why it has never been part of the brand’s core range, but with her growing influence, Ten Kortenaar has decided to carve out time to perfect this combination of Scottish and Dutch influences and make it viable as a core product.

Another benefit is her involvement with cask management. Bols Genever is often matured in oak – sometimes for more than a decade. “I feel very lucky to be responsible for the maturation and blending process, although there will always be other people involved as well. Because no matter how good your sense of smell and taste is, you might have a bad day or a minor cold, or your taste could be slightly influenced by what you’ve had to eat. So, I need other people. That’s why we have a blending commission at Lucas Bols. Together we conduct blind tastings to ensure a high and consistent quality.”

Ten Kortenaar now leads a team of distillers; it is her responsibility to school them in the teachings of Lucas Bols and Wynand Fockink, which she in turn learned from Van Leijenhorst. She feels genever is ready for a larger stage: “We’ve been promoting the category together with other producers in the United States. I believe we need to continue to combine our forces. The future for genever is very promising.”