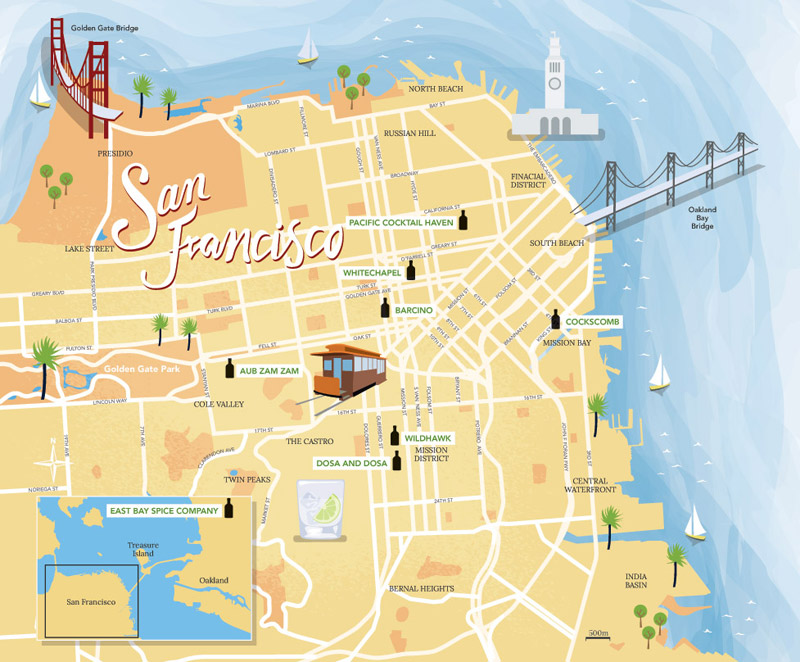 The San Francisco and Bay Area bars that do it best

San Francisco, New York and London were the cities that ushered in the cocktail renaissance a couple of decades ago, just as San Francisco was one of history’s most formative cocktail cities in the 1800s. SF has long been a champion of gin and botanical forward cocktails, pioneering small batch gins like Anchor Distilling’s Junipero in the early 1990s and St George Spirits since 1982, eventually known for their world class gins.

While gin-only bars aren’t the norm, there are plenty that master gin, whether Spanish-style gin and tonics or martini dive bars. There are longtime greats like 15 Romolo (15romolo.com) that excel at cocktails in every spirit including gin, gin-centric bars like Spanish restaurant, Coqueta (coquetasf.com), or gin-forward Indian bars. Here are eight standout bars in the city by the Bay that know how to play with gin.

Celebrity chef Chris Cosentino’s massive meat and seafood dishes at his SoMa restaurant, Cockscomb, are enhanced by a wide range of international gins and a gin-centric cocktail menu, a tribute to his love of gin. House martinis and G&Ts flow alongside the fun of a draft Negrowler, a growler/jug of Campari and Anchor Steam beer, lively and refreshing together. Sip a Chef’s Gin Jams (featuring a changing jam mixed with gin, lemon and tonic) in Cockscomb’s bi-level, industrial-cool space at either the upstairs or downstairs bar.

Pacific Cocktail Haven (PCH)
580 Sutter Street, San Francisco
CA 94108
http://www.pacificcocktailsf.com
Thanks to bar master Kevin Diedrich, PCH (Pacific Cocktail Haven) serves some of the best cocktails in the country from a pro who has been crafting unique, balanced drinks for well over a decade. The menu breaks down by spirit with a gin section going beyond the expected. Go vegetal and fresh with The Santorini Summer in warmer months (Bombay Sapphire East gin, citrus, tonic, house tzatziki-style mix of Bols Natural Yoghurt liqueur, cucumber, garlic, salt and olive oil) or silky and lush in cocktails like the Leeward Negroni (Sipsmith VJOP Gin, coconut-washed Campari, pandan cordial and bitters).

DOSA and DOSA on Fillmore
995 Valencia Street, San Francisco CA 94110
1700 Fillmore Street, San Francisco CA 94115
http://www.dosasf.com
Since opening the original DOSA on Valencia in 2005 and the London-reminiscent DOSA on Fillmore in 2008, Anjan and Emily Mitra have had a big hand in popularising South Indian cuisine nationally. In addition, they’ve long had a robust gin selection, going so far as to distill their own house Blade Gin with the South Bay’s Old World Spirits. They’ve featured Spice Route-influenced cocktails at both locations, showcasing ingredients like house basmati rice syrup. Their robust gin selection includes a heavy dose of local and small batch gins, while drinks like their Bengali Gimlet mix Tanqueray Rangpur Gin with a house curried nectar and lime.

Aub Zam Zam
1633 Haight Street, San Francisco CA 94117
A dive bar legend since 1941, Aub Zam Zam (aka Zam Zam) is a charming slice of history with its dingy Arabian Nights–inspired décor, virtually unchanged since the 1940s. This San Francisco treasure in the heart of the Haight-Ashbury is laid back and welcoming, boasting one of the best jukebox lineups in town. Besides housing an unusually strong small batch gin collection for a dive bar – and serving up beautifully stiff martinis for under $10 – the bar holds a quirky background with legendary bartender/owner, Bruno. He cantankerously ran the bar for nearly 50 years but passed away years back, infamous for kicking out people who ordered vodka martinis, informing them that there is no such thing (a martini is made with gin). To this day, they cheekily honour him with a vodka martini on the menu.

East Bay Spice Company
2134 Oxford St, Berkeley CA 94720
http://www.eastbayspicecompany.com
Opening in 2013, East Bay Spice Company is small, low key and just off the Berkeley campus serving Indian chaat and cocktails. But this is no typical college watering hole. With their new illustrated passport menu, they play with Indian ingredients from a house garam masala-infused brandy to coconut curry cream. Given the Indian tie, their gin selection is one of the strongest in the East Bay, with around 50 small batch and unusual gins. Gin is showcased in unique drinks like Gold of Harappa featuring Anchor Distilling’s Junipero Gin with a touch of Campari, Corbin Cash Sweet Potato Vodka, lemon, saline and a house turmeric ginger cordial.

0 comments on “Playing with Gin”