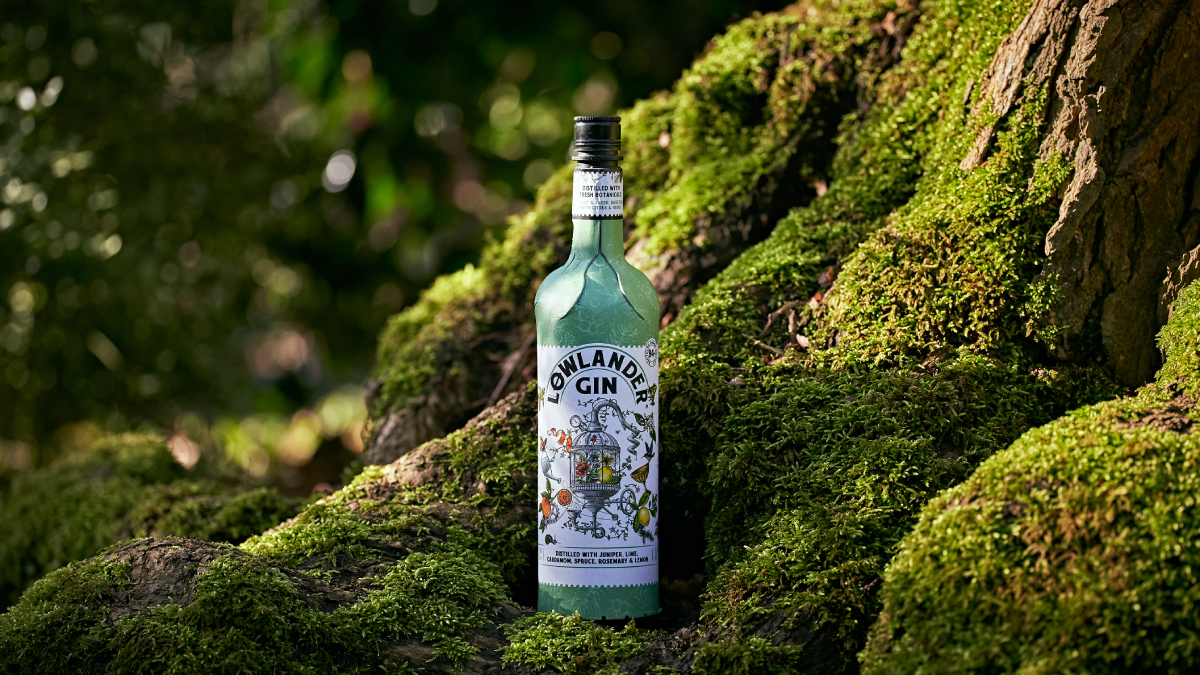 Imagine you’re creating a new gin, but sustainability is the main jumping-off point. Better yet, you’d like to make one of the world’s first nature positive gins. With every aspect, no matter how minor, you’ll be asking yourself what the most sustainable approach is. Of course, without ever losing track of flavour. Because what would be the point otherwise? It for sure is an approach that requires a different mindset. But botanical brewer Frederik Kampman was up for the challenge.

Brewer? Yes, brewer. Although gin is an important part of Kampman’s coming of age in the drinks industry, he’s made a name for himself as founder of Lowlander, a Dutch beer brand. His official title is chief botanical officer, which says a lot about their approach to flavour. Lowlander are brewing with botanicals to “broaden the horizons of beer.” After first establishing his brand in 2015, Kampman admits the first few years presented a steep learning curve. “It’s challenging to brew with botanicals and come out with a qualitative, consistent product on the other end”, he explains. “For example, should you use dried botanicals, or should they be fresh, pulp, a juice or an extract? And you must also decide at what stage of production botanicals should be added.” For example, Lowlander’s Ginger & Lime Leaf includes ginger (obviously). But ginger is used in different ways. First, fresh ginger is added when the wort is boiled, which makes for a sort of ginger tea. Freshly squeezed ginger juice is added afterwards to include more spiciness. And finally ginger extract adds a third flavour dimension.

Kampman’s fascination for botanicals stems from his time spent in the United Kingdom. Specifically at G&J Distillers. This historical producer is known for gins like Greenall’s, Bloom, Berkely Square and Opihr Oriental Spiced Gin. The latter of which Kampman helped launch. It’s during this project that Kampman was introduced to gin’s different flavour quadrants, such as juniper-forward, floral, herbaceous, or spiced. Also, he learned how important it is to think beyond the classic Gin & Tonic, and work with bartenders to explore uses in different cocktails. “We’d then discuss with Joanne what ingredients to use and in what combination.”

That’s Joanne Moore he’s referring to. She began her career at G&J Distillers as quality controller in 1996, but quickly rose through the ranks and was eventually appointed Master Distiller a decade later. “Joanne taught me an incredible amount and she was always very generous with her time and advice. We worked closely during the development of Opihr. Visiting the botanical room was an eye-opening experience. Sort of a laboratory with all kinds of herbs and spices. I became obsessed. She let me try what things tasted like before they went into a pot still. And after distillation too, of course. Or taught me that sometimes you need to exert patience, allowing ingredients to properly marry.”

It’s this experience that allowed Kampman to successfully launch Lowlander Beer, now one of the leading craft brewers in The Netherlands. At the same time, he’s acutely aware of the fact that nature’s resources and benefits should never be taken for granted. Lowlander wants to take less and will try to give back to nature whenever possible. This journey, combined with Kampman’s love of botanicals, formed the inspiration for Lowlander Gin. Released in 2022, it sees Kampman return to his roots. But with thousands of gins already in the marketplace, there wasn’t much room for innovation flavour wise. Instead, he focused on coming up with an exemplary juniper-forward gin. With some light herbaceous and citrus notes. But really it was all about creating a gin with off-the-charts sustainability.

The carbon footprint of one bottle of Lowlander Gin is 1.28 kg CO2. It represents all the emissions created by Lowlander in their supply chain. This is known as a cradle-to-gate footprint, and it is the lowest possible Lowlander managed to achieve. “It’s best to reduce your emissions as much as you can. That should be everybody’s focal point. But alternatively, it’s a great idea to offset your emissions by planting new trees or protecting existing ones.”  Something Lowlander does through Trees for All, a non-profit that plants trees to enrich farms in Bolivia. They compensate their emissions twice over, making Lowlander Gin effectively carbon-negative.

The majority of emissions (50.2%) come from Lowlander Gin’s neutral alcohol base. Kampman kind of assumed their grain neutral spirit would have to be hyper local, organic and small batch. He assumed wrong. “Organic, yes, of course. But bigger production means greater efficiency. We initially talked to a producer in a nearby province, but finally settled on larger volumes of organic wheat alcohol from Poland. The energy use and CO2 emissions are significantly lower. It completely offsets the long-distance transport.”

The botanicals are the second biggest contributor (31.79%) to Lowlander Gin’s footprint. Almost all of them are fresh instead of dried, which is unusual. It was a choice made for sustainability reasons, but Kampman couldn’t have been happier with the results. These circular ingredients, meaning they would’ve been discarded otherwise, imprint Lowlander Gin with an unmistakable fresh character. The lime and cardamom leaves are cuttings sourced from Koppert Cress – their innovative greenhouse horticulture produces plant ingredients for chefs. The gin’s herbal, piney flavour is provided by spruce needles, which come from the trimmings of a sustainable Christmas tree farm. Rosemary clippings come from the zero-waste, vertical farms of Growy Amsterdam. Finally, reclaimed lemon peels are rescued and revived from restaurants and bars in partnership with PeelPioneers. “The only thing about circular ingredients is that you’re never quite sure when they become available. When we do get them, we immediately distil them. So, while our flavour profile is that of a London Dry, technically it isn’t. Lowlander Gin is a compound gin because that’s simply what works best in this context.”

Juniper is the only botanical that isn’t fresh. They couldn’t find any certified organic juniper berries, which are a threatened species in the Netherlands. And that’s a problem. Because no juniper means no gin. The solution once again came from Poland. RUNO is a foundation that provides more than 200 different kinds of wild-collected herbs from the north-eastern areas of Poland. They harvest juniper berries to FairWild standards. RUNO is an important source of income for the locals in this largely rural area. And their approach helps preserve the biodiversity of the region.

The final piece of Lowlander Gin’s sustainability puzzle is packaging. Glass was considered briefly, but not deemed viable. Then tin became the frontrunner. Cans, much like they are used for olive oil. The only problem was the liner. It was impossible to guarantee that it wouldn’t be affected by such a high-strength spirit, potentially eroding the tin. The solution was found in a lightweight bottle made from 94% recyclable paperboard. It has a polypropylene liner, but still uses 77% less plastic than a regular plastic bottle. The paperboard bottle as well as the liner are 100% recyclable. As a result, the carbon footprint of a Lowlander Gin bottle is 85% lower than a regular glass bottle. And the water footprint is at least four times lower than glass.

Lowlander’s nature positive gin is a proud accomplishment for Kampman, but he refuses to become complacent. While the gin is an important milestone, he finds there’s still a lot to improve for Lowlander as a whole. A Life Cycle Analysis was carried out for Lowlander Gin, but now all other Lowlander products will be assessed also. “We’re working on a roadmap to make our company nature positive by 2030. I want to find out what the pressure points are for our beers. Is it packaging, transport, raw materials? Most importantly, I want to learn what can we do to further improve.”

0 comments on “The ‘nature-positive’ world of Lowlander Gin”