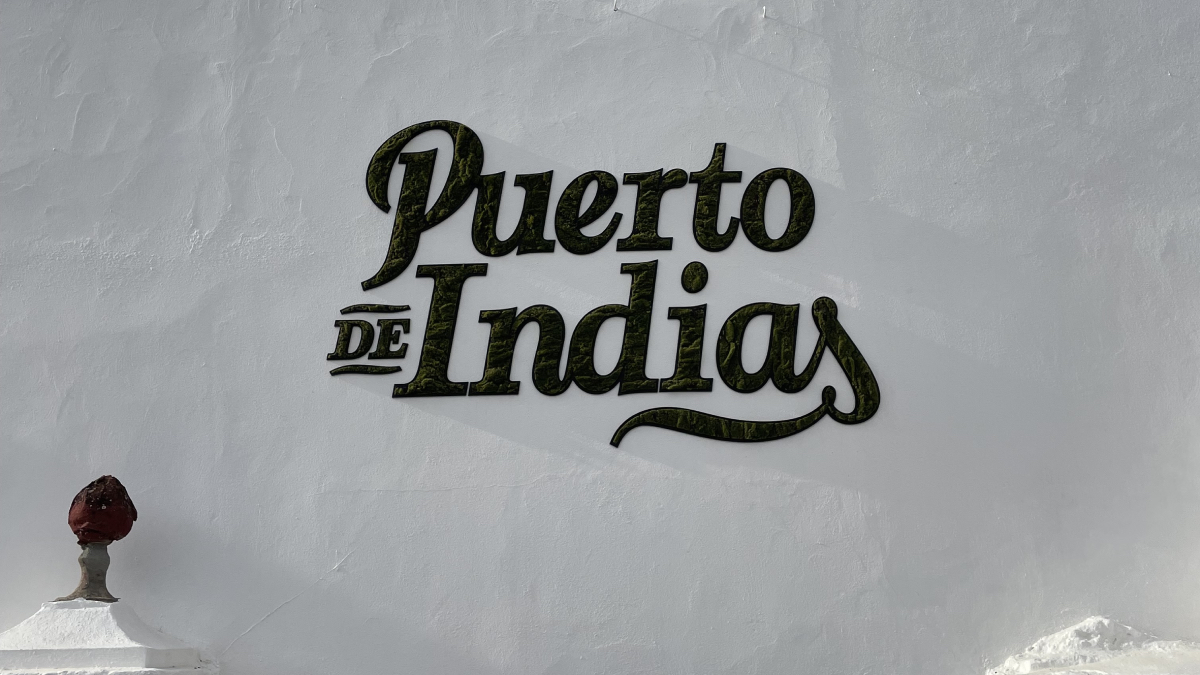 What separates the distillery of Puerto de Indias from any other in the world is its bright vibrant colours and strong strawberry aromas. It’s a flavoured gin lover’s paradise and the brand’s character is apparent within seconds of stepping within its grounds.

The distillery lies in the intimate town of Carmona, Seville, situated on the highest slopes of the Alcores. We were treated to a street train ride around the town before entering the distillery, as said to enhance our appreciation for the influence that Carmona has had on the distillery and even the gin itself. It’s evident that the city takes great pride in its origins. Even entering the city’s airport, the first thing visitors are greeted to is a giant image of Seville-born footballer, and captain of the city’s most established team Sevilla, Jesus Navas, lifting a European trophy. This is a city proud of its heritage, proud of those who come from here, and proud of the achievements that have taken place in this city.

The town itself is deeply associated with Roman times. Much of the architecture surrounding the distillery – and within the grounds itself – dates back to this time, whether it’s gates, doors or small rocks placed on the side of the pathway.

There’s a sense of paradisal joy when the bright white walls of the distillery are first seen.

Running beneath our feet is fresh water, once again dating back to the Roman time period which was used as a Roman water mine. The distillery uses it for its fresh water, complete with a beautifully enchanting waterfall that runs over the roof and into a pool, near to where the soon-to-be-launched visitors shop will sit.

It only takes a matter of minutes of wandering the breathtaking distillery to understand how this is the home of such fruity and colourful gins. It’s easy to see where the foundations of the vibrancy in Puerto’s strawberry gin, for example, begun.

In one room lies a variety of ingredients used in various Puerto expressions, including strawberries, cinnamon sticks and blackberries. Exposing each ingredients sitting in single glass bowls allows their aromas to spread through the air rapidly, creating a sudden urge to taste all of these flavours at once.

Puerto’s rise has been unprecedented. With a lack of any kind of international marketing for many years, its popularity is said to have stemmed heavily on word of mouth. Firstly conquering Spain itself, Puerto has become one of the biggest imported gin brands in the United Kingdom, while holding the crown of number one in South America.

Juan Miguel Perez Ilzarbe, International director, spoke about the brand’s venture into the British market and where might be next: “For us, the UK. We are currently in 52 markets, and we are in the top 5 imported flavoured gins in the UK. It’s quite easy to be there, because there aren’t that many imported brands, they’re all national brands. But even with those included, we are ranked number 18. With the UK, the key thing is the size of the market. It’s a gin market, together with the Spanish market. We claim to be the original ones, the ones that – whether by mistake or mental infusion – in 2015, used real strawberries. What that gave us was an edge in public communications that should relate to the UK consumer. It’s not just about the product, but it’s also about the lifestyle. We had to think about these 360 campaigns, and which countries to target.”

At Puerto’s own bar, it’s team of talented bartenders and staff showcase a range of food and drink pairings. They explain that while some flavours are typically married to each other, others are not, but it’s important to try the gin with all kinds of foods and textures.

Toward the end of the distillery’s welcoming guide through this paradise of flavoured gin, we are took outside to the back gardens and treated to a tremendous flamenco dance while sipping our preferred gin flavours of choice. It’s a beautiful, hidden area on the grounds and its immaculate condition and design layout further allows understanding of how much care and precision is took into their products.

Much like the image of Navas when first entering the city through the airport, Puerto de Indias’ distillery is designed in a way that champions the gin that it creates, and as it grows and grows, the town of Carmona, and the city of Seville, are keen to champion its humble beginnings and its ever growing success. The brand is flourishing in the UK and other markets to huge, growing success, and it’s likely the town will treat it as such a hero just as much as Navas.