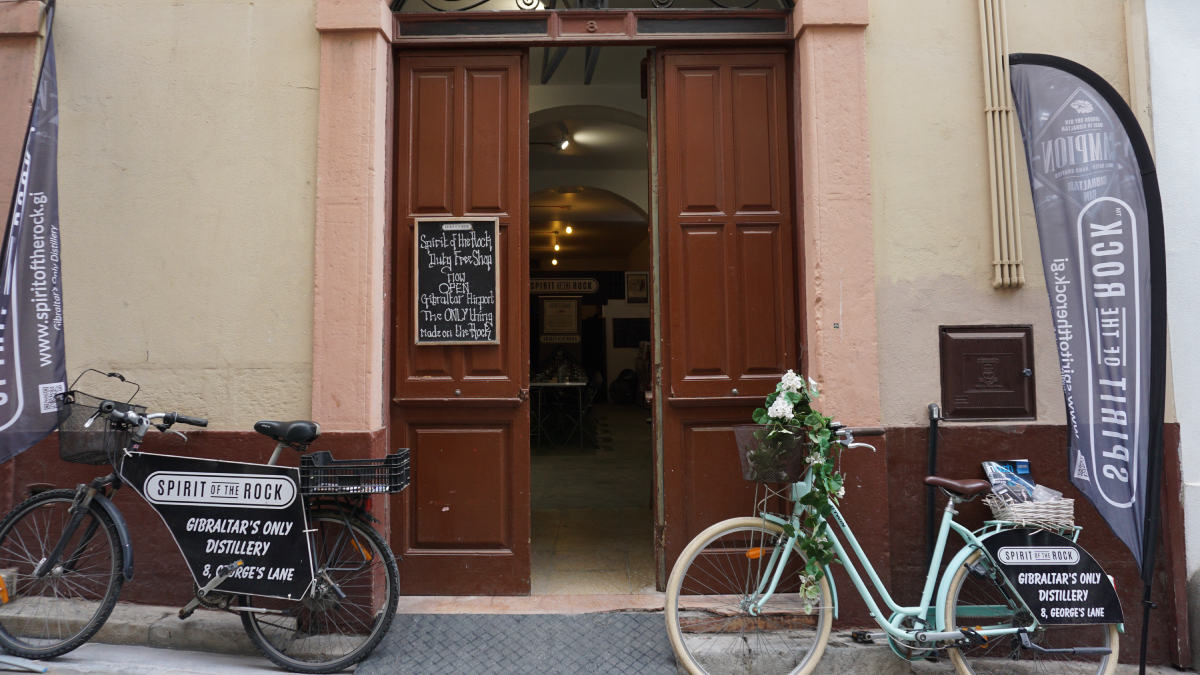 Words and photographs by Rosalind Ormiston.

At number 8 George’s Lane, a quiet road off Main Street, is Spirit of the Rock, Gibraltar’s only Distillery. This small-batch, hand-crafted gin company is the creation of Stella and Peter Millhouse, who are passionate about producing award-winning spirits that don’t cost the Earth.

At its entrance, outside the glazed glass and dark wood doors, stand a couple of pushbikes with baskets holding information on Spirit of the Rock products, with invitations to come inside for the Gibraltar Gin Experience – an introduction to the history of Distilling, Gin and Gibraltar. Over 100 years ago, the building housed a lemonade factory. Closed since the 1940s, it was in a sorry state before it was chosen for the micro-distillery.

Opening the front door, the expectation is for a cavernous factory building, but instead it’s an airy, high-ceilinged, double-arched rectangular room, with meticulously clean apparatus set up for spirits production running along one side wall. Amongst this equipment is ‘Athena,’ an elegant,100 litre Copper Still. On surrounding shelves are bottles of hand-crafted gin and vodka products. Running down the centre of the room are four long tables. In the morning these are used to bottle, label, and pack the products produced by the Spirit of the Rock team. In the afternoon the tables are laid out for groups of visitors who come here to learn about the history of distilling, and of gin and Gibraltar, while tasting six landmark gins created in this distillery. At the rear of this room, a wall-divider sections off the raw materials and stock.

Spirit of the Rock opened in George’s Lane on 1 April 2019. A year later, their first creation, Campion London Dry Gin, was voted ‘One of the Best in the World’ at the 2020 Gin Awards. How was this achieved in such a short time? A few years earlier, Peter’s career as a professional golfer was coming to an end. He and his wife Stella, a native of Gibraltar of Italian descent, whose family opened the first ice cream shop on Main Street in the 1950s, were looking to create a premium product that was special to the peninsular. Gibraltar has had a past reputation for cheap alcohol and cigarettes, an image that underrates the incredible specialties of this city. Interested in micro-distilleries, Peter was trained-up in London and worked alongside master distillers to learn how to create a blend worth tasting. It took around two years for Stella and Peter to achieve the blend of botanicals that became Campion.

Amid setting up, creating, promoting and selling premium products, the Covid-19 pandemic hit Gibraltar. With shops, restaurants and businesses closed, Spirit of the Rock was suddenly thrust into the hearts and minds of Gibraltar’s citizens. Using its alcohol as a base ingredient, 12,000 litres of hand sanitiser was made by the team for the Government and the Health service to distribute. It was a generous, immediate act and one that brought the micro-distillery recognition for its generosity and willingness to help the community, reinforcing its presence as a valued local enterprise. With the pandemic under control, the distillery returned to what it creates best.

Two Spirit of the Rock premium gins deserving special mention are named after Gibraltar’s unique flowers. The first Campion (Silene Tomentosa) – the award winner – launched in 2019 and is made from a blend which includes a few seeds from this rarest of flowers, which grows wild on the upper areas of the Rock and not found anywhere else in the world. The seeds for their gin are gathered from plants bought from Alameda Botanical Gardens, as this is a protected species and cannot be touched in the wild.

Campion is 48% ABV and contains 13 different botanicals. This includes most of the usual suspects (minus lemon) plus campion seeds, Moroccan rosebuds, and local carob pods, which combine to produce an aromatic London Dry Gin. This is strong, smooth and sophisticated stuff, which can be easily enjoyed with just a twist of orange zest (don’t add lemon!). Fabulous in a classic Negroni, very Dry Martini, or, if you can find it, a little FT Clementine and Cinnamon Tonic (not FT Spanish Clementine, which is far too sweet).

The second premium gin is Candytuft (Iberis gibraltarica), a new Western Dry Gin, launched in December 2021. It is named after the national flower of Gibraltar. The plant is indigenous to North Africa and, in mainland Europe, it only grows on the Rock. The flavour is a blend of grapefruit, lemon, sweet orange and peaches with a few seeds from the candytuft flower. It has a sensational aroma and distinctive, delicious taste, and can be served long with any of the following: cucumber; lemon; orange; grapefruit; peach.

Added to Campion and Candytuft, four other gins produced relate to historic gins from the Gibraltar Gin Experience: Just Juniper circa 1055; Jaco Gin, 1690; Plymouth Style, first made in 1793; Old Tom Gin, circa 1830. They also make a Premium Vodka named Moon Lizard after the nocturnal lizard that inhabits the top of the Rock.

It takes about three days to make 120 bottles from start to finish. The different types can be made alongside each other, with one macerating as another is distilled, while yet another is bottled. The micro-distillery is set to produce around 15,000 litres of spirits this year and, as the only product made in Gibraltar, it is prized and appreciated by visitors and locals alike. Unfortunately, there are no ships sailing from Gibraltar to Britain to allow easy overseas export, but with the possible inclusion of Gibraltar into the Schengen area, this may change and a land route to Europe could soon be available.

This dynamic and agile company has recently opened a Spirit of the Rock shop at Gibraltar airport. The duty-free shop is hugely successful and proves there is a big demand for handmade premium spirits. Visitors are now allowed to take four litres of spirits back to the UK since Brexit, and naturally bringing home products unique to Gibraltar as gifts and souvenirs are preferred.

After four years in business, talk of expansion is on the agenda, as well as how best to increase productivity whilst maintaining the green, hand-crafted ethos that’s crucial to the Spirit of the Rock venture.