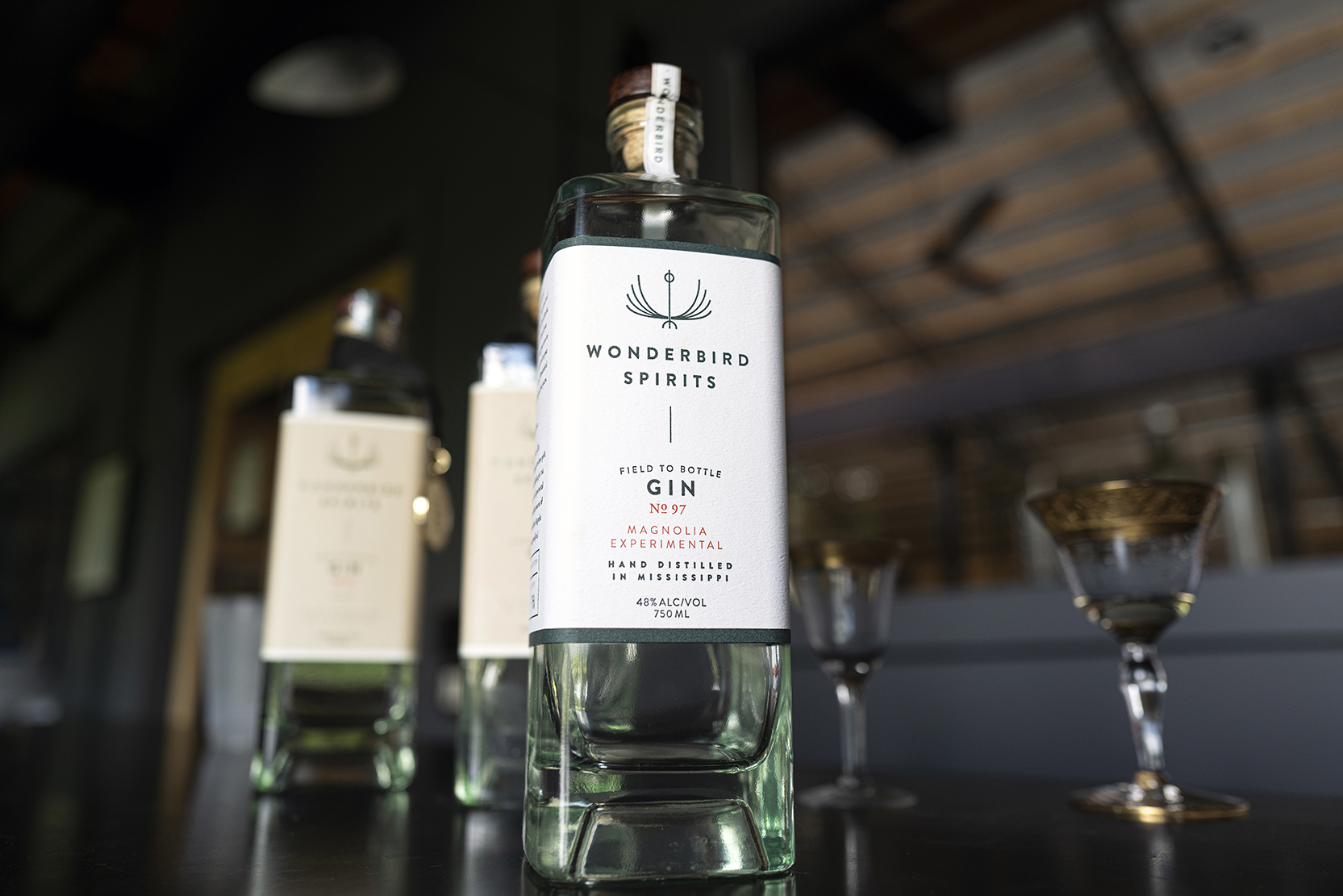 How three friends were drawn to a mythical Mississippi county to launch its first legal distillery, Wonderbird Spirits, and to create a unique gin

Yoknapatawpha County (pronounced just like it’s spelled) is the setting for almost all the books by the great author William Faulkner (no relation).

Substituting the name Jefferson for the county seat of Oxford, Mississippi, and similar names for almost-recognisable places, the novelist names one real place – Taylor, Mississippi – in his otherwise fictional county.

In Go Down, Moses, Lucas Beauchamp hid his moonshine still every dawn in the creek bed not far away. No doubt there were previous distillers in Taylor, but none legal.

Wonderbird Spirits is the first legal distillery in Yoknapatawpha County – but unlike the county, Wonderbird is real, located fewer than 10 miles south of Faulkner’s Oxford home. The distillery’s co-founder Rob Forster felt drawn to Oxford after his father, an Ole Miss (University of Mississippi) graduate and longtime resident, passed away. Forster felt as if life was trying to tell him something.

He ditched his career as a movie-industry attorney and headed out to Oxford, not knowing quite yet what he wanted to do with the rest of his life, but that he wanted to make something. Forster quickly discovered this town of 40,000 residents has an elevated food and beverage scene, which includes three James Beard Award-winning chefs.

It also wasn’t long before Forster heard about Chand Harlow, an Oxford resident and Mississippi native who had a similar dream of starting a distillery; he reached out to find that Harlow also made very good cocktails.

“[Harlow] had this as a burning passion since he was in his teens, to start a distillery and to do a grain-to-glass distillery,” said Forster. “And the shared dream was, let’s do something that first and foremost satisfies our standard, which is very, very high. We’re not trying to make a $20 bottle of hooch to sell to the Ole Miss kids. We want to make something surpassingly excellent.”

The third partner, Tom Alexander, was Forster’s roommate at the University of Virginia 25 years ago, and best man at his wedding. Alexander left his high-powered IT job in Austin, Texas, and moved to Oxford to start the distillery. They became partners in flavour creation, working to construct a gin that was unique and uniquely of Mississippi.

“We all love gin. We esteem gin. We esteem where it is in classic cocktail culture. We esteem it as a craft: a true craft. Because, as you very well know, once you’ve introduced that fore-note of juniper, you are then at liberty to truly create something completely and utterly unique, unlike anything else that exists in the world,” said Forster. “That’s so exciting from a creative standpoint. I think all three of us wanted to unleash creativity that we had bottled in us in our corporate lives. And gin allowed us to do that.”

For their base ingredient, the Wonderbird partners settled on jasmine rice, which they source from Two Brook Farms in Sumner in Tallahatchie County, a family-owned business dedicated to sustainable practices.

“What we wanted to do was buy a local agricultural product, and then turn it into our base alcohol, and then learn how to make gin with it,” said Forster. “That takes a really long time… and there’s gonna be a lot of experimenting, and a lot of failing, and a lot of what I call stumbling upward.”

The jasmine rice gave their base spirit the warm, viscous mouthfeel and natural aromatics that support the other botanicals elegantly, but it is also slow to convert its starches to sugar for distillation. The decision to work with rice set off a flurry of activity. To understand traditional rice fermentation, they attend sake-making workshops, treating the grain the way a sake brewer would, breaking down the starches with koji.

“I really take my hat off to Tom and Chand because they got crazy scientific and kind of mad scientist about this,” said Forster. “Those guys cracked some pretty arcane chemistry books and read a lot of articles.”

Harlow and Alexander learned a technique that reduced the fermentation time from 30-40 days down to about eight days, which involves heating the mash up to four very specific temperatures then leaving it at those plateaus for prescribed times.

After perfecting that technique, the next challenge was developing a botanical recipe.

“We were months in recipe development,” said Forster. “Yeah, we iterated, and so
we had our first, and then we had our second, and we had our third. And then
we got up in the 60s, and we had a really good

at number 61. We got up into the 80s, but we kept coming back to number 61. And as you know, our flagship is called No. 61, because that’s ultimately what we settled on.”

Homeopathically, red clover top is known as a blood purifier, relaxant, antioxidant and anti-inflammatory. A little sprinkled in your bathwater is said to keep away evil. Forster explained that red clover is locally considered kind of a weed. “They grow all over medians and bridges and… highways all over northern Mississippi and southern Tennessee.”

In constructing the recipe, these perfectionists don’t simply throw all of this in the pot or a basket and distil it, even though they have a still custom made for this purpose. Since the best of each ingredient comes over the still at different times, Wonderbird makes concentrated single-botanical spirits on small laboratory stills, making heads and tails cuts tailored to each ingredient. The gin is constructed by blending these distillates into the base in specific proportions.

Wonderbird Spirits Gin No. 61 is an incredibly sippable, finessed, and complex spirit. No. 61 Cask Finish is a very limited release of the same gin that spends a few months ageing in used bourbon barrels. The wood sugars and vanillin relax and soften the flavours.

The last of Wonderbird’s three gins is a product of Covid creativity. Grounded from marketing trips during the pandemic, Forster couldn’t help but think of his home state’s ubiquitous magnolia trees, a symbol of the South.

“I live right off of Ole Miss campus, and I kept seeing those granddaddy magnolias,” said Forster. “And I just furtively drove in there one day, and kind of parked my car in a random corner of campus, and brought some shears with me, and plucked a few of those massive magnolia blossoms, and went out to distil it. We got out the lab still. And it just started coming out perfect, so we said, ‘Can we build a second gin? Can we build a new expression that showcases midsummer Mississippi magnolia?’”

Wonderbird Spirits No. 97 Magnolia Experimental Gin also contains coriander, tellicherry peppercorn and chinchona bark, but the unique character is magnolia, carrying the sweet fragrance of a summer night in the South. No. 97 was released shortly before Mississippi changed the state flag to feature a magnolia blossom. It received instant acclaim when Garden and Gun magazine named it overall winner in the 2021 Made in the South Awards.

In the midst of the American craft distilling world going crazy over whiskey, three partners decided to make gin with a real sense of place and make it in a place not known for distilling (Mississippi was the last state to repeal Prohibition, finally doing so in 1966).

“This project was all about us answering some calls in our own hearts,” said Forster, “not because we’re idealistic but because we felt, if we did it that way and answered those calls to our own satisfaction, good things would come.”

0 comments on “Working wonders with rice at Wonderbird Spirits”