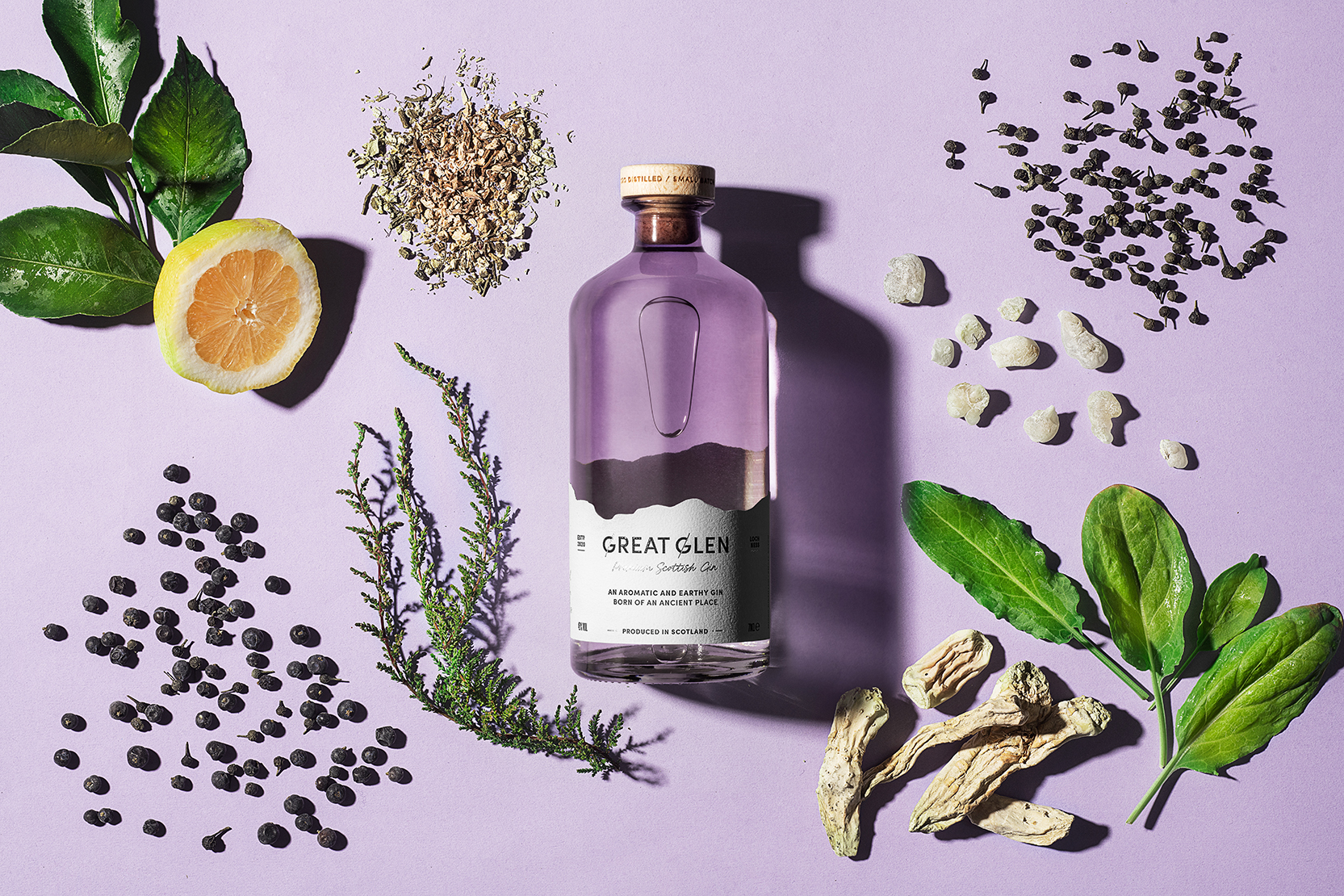 Loch Ness is renowned the world over for its elusive ‘monster,’ but the gin distillery developed close to its shores by Daniel Campbell and Adam Dwyer is probably the smallest in Scotland. Measuring just 24 square metres, the Great Glen distillery is situated in a former shop once run by Campbell’s late mother in the busy tourist village of Drumnadrochit, Inverness-shire.

Campbell has 20 years of experience in the hospitality industry to his credit, completing a course in hospitality management at the renowned César Ritz Colleges in Switzerland before going on to work in five-star hotels and Michelin-starred restaurants. He subsequently launched a successful tea and coffee business based in Edinburgh. Meanwhile, Adam Dwyer spent 20 years as a chef in numerous Michelin-starred and high-end establishments around the UK, for the last 14 years acting in a head chef/executive chef role. The pair met when Dwyer moved from Somerset to Edinburgh in 2012 to take up a position as head chef at the Royal Overseas League Hotel, where Campbell was general manager.

Campbell recalls, “The idea of creating a distillery was thought up during the first lockdown of the Covid-19 pandemic. I moved into a family-owned cottage near Abriachan, a small hamlet overlooking Loch Ness. That area of the Highlands was renowned for illicit distilling during the 1800s. The cottage next to mine was home to John Macdonald, who was in court many times for distilling whisky illegally. This captivated my imagination and from that I bought myself
a two-litre still to tinker about in my own time. Quickly realising I had a hidden passion and seeing a gap in the market along the north side of Loch Ness, I decided to build and own a distillery. I then presented the idea to my best friend and now business partner Adam Dwyer.”

Dwyer believes their partnership to be “paramount to the business”. His roles include the day-to-day running of the distillery, recipe development, administration, stock control and ordering, while Campbell is responsible for the sales and marketing aspects of the company. Dwyer adds, “Daniel’s time in hospitality gives us an edge as he has spent years working alongside people who are now our target customers and understands the needs and expectations of their businesses.”

According to Campbell, “Adam gained a huge knowledge and understanding of flavour combinations and organisational skills and the move from head chef to distiller has been an easy one, with many of the skills he learned as a chef easily transferring to the new role as master distiller. Working on recipes, costings, dealing with suppliers, being…a total perfectionist are all important parts of distillery life!”

Before Campbell and Dwyer began trading, a year was spent planning and building the distillery and developing the brand. Campbell explains, “For the identity, we felt compelled to reference the natural fault line of the Great Glen in all its sublimity. This dissected the Highlands and prised open the earth to create what have become the world-famous lochs.”

When it came to equipping the new distillery, Campbell and Dwyer looked overseas. Their 200-litre still – named Jacqueline after Campbell’s mother – was custom-built in China, while most of the rest of the equipment came from Polsinelli, a distillery supplier in Italy. Dwyer notes that the distillery averages around 400 bottles per batch of each of its core gins.

Those core gins are Great Glen Premium Scottish Gin and Great Glen Premium Scottish Pink Gin. Dwyer explains, “For our main London dry we wanted to produce a gin that was easily recognisable. There are so many gins in Scotland now and we found during tasting and research that a lot of them taste very similar, using a lot of the same ‘local’ botanicals. We wanted to create a London dry gin that stayed true to the London dry style but has a noticeable stand-out flavour.”

In total, Campbell and Dwyer trialled 86 recipes, using some local botanicals but not limiting themselves only to local ones. Their final recipe includes Scottish heather and sheep’s sorrel, two ingredients that are found in abundance around the distillery, alongside aromatic Amalfi lemon peel (100 lemon peels are used per batch) and royal grade frankincense resin, which gives the spirit a piney, floral finish.

The distillery is soon to launch Inverness Gin, a London dry gin featuring local golden chantarelle mushrooms and kelp seaweed. Beyond that, the plan is to begin vodka production early in 2023, followed by gin liqueurs, rum and eventually whisky. The timescale for a move to whisky will depend on the availability of resources, as its production requires more space and expenditure on equipment. Campbell and Dwyer are keen to eventually move to larger premises, but insist that they must have character and must be in Drumnadrochit, so the search is on.

“We want to work towards becoming totally carbon neutral,” says Dwyer. “We envisage a site that will have space for us to grow many of our own botanicals and also have our own barley crops for when we start to produce whisky. A gin school is already in the planning which will allow customers a real hands-on experience, making their own bottle of gin to take home.”

Due to the current ‘bijou’ nature of Great Glen distillery, a second unit has been taken on for storage and bottling purposes, but gin making takes place during the night, so there is space to run the retail side of the business during the day. This means that Dwyer often begins distillation around 6pm, with the operation only finishing at 3am to 4am. “I swapped 80-hour weeks in the kitchen for 100-hour weeks in the distillery, but I’m loving it!” he says.

Great Glen is open daily for retail sales and is situated around the side of the Loch Ness Centre and Exhibition, which receives some 300,000 visitors in a normal year. That footfall was a major reason for the choice of location. Dwyer adds that he and Campbell also attend farmers’ markets at the weekends, “not just to make sales but to get the brand known”.

The distillery has two full-time staff and three part-time staff, and has recently taken on a trainee distiller, Simone Peter, who is part of the Modern Apprentice scheme. Her employment is aided by local renewables charity Soirbheas, which funds a percentage of wages and training costs for people in the area on Modern Apprenticeships.

The sheer success of their first year has taken Dwyer and Campbell by surprise. Only a month after launching, Great Glen’s first gin was shortlisted in the Scottish Gin Awards; this was followed by silver medals for both its gins at the World Gin Awards. Most recently, the distillery was shortlisted for the Scottish Food & Drink Excellence Awards, the winners of which will be announced in September. “The category is ‘Distilling Product of the Year,’ it’s not just gin, so this is the biggest accolade for me so far,” Dwyer notes.

Clearly, the partnership between Campbell and Dwyer at the Great Glen distillery is well on the way to being a monster success.

0 comments on “Great Glen: Distilling on the shores of Loch Ness”