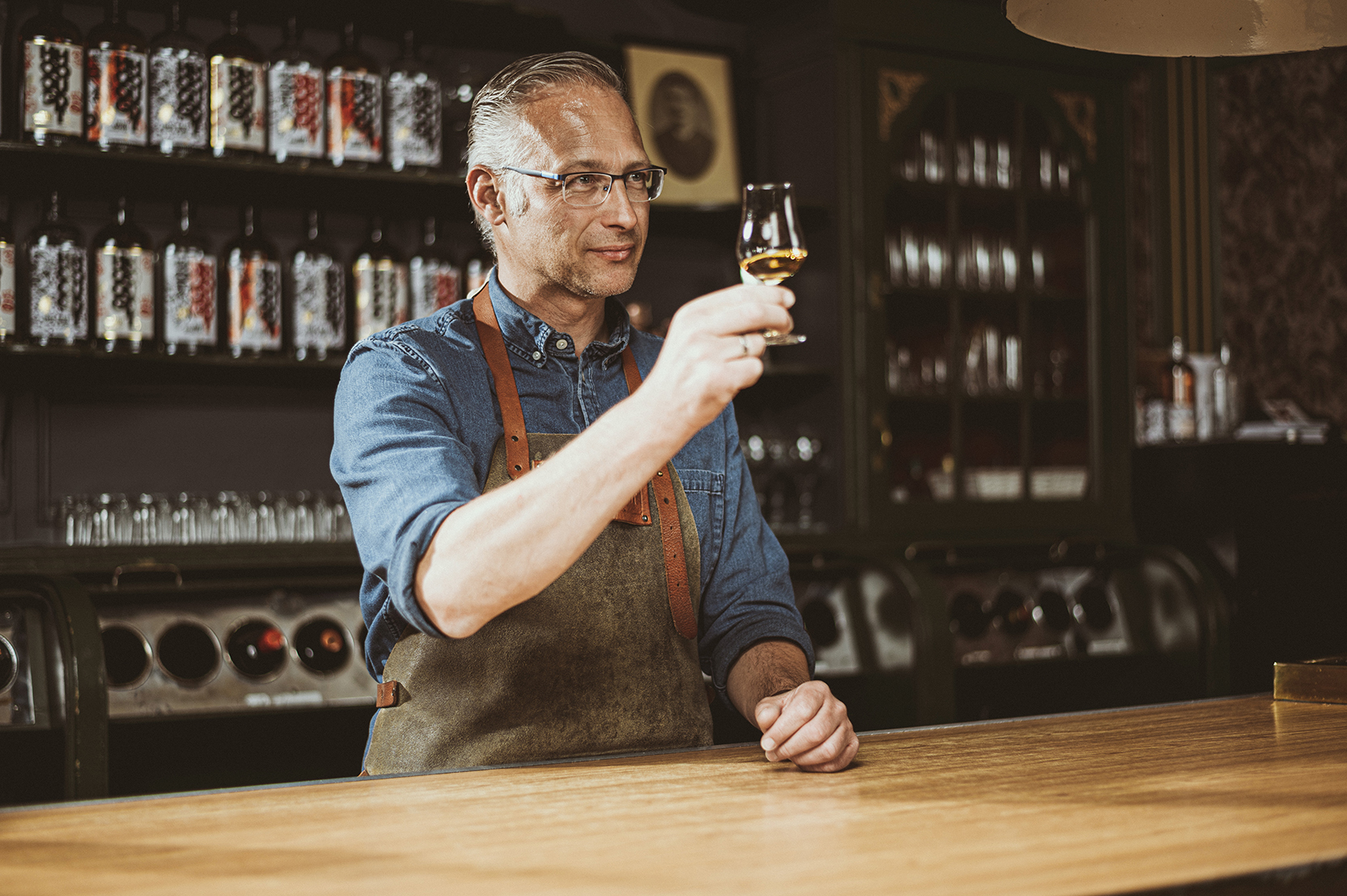 When visiting Oldambt in the northernmost Dutch province of Groningen, you’d never suspect that the Netherlands is one of the most densely populated countries in the world. This region was once referred to as Europe’s granary and its vast landscape is still home to countless farmers, but cattle are now grazing many of the fields that were once ripe with all sorts of grains. Most of the cereal grown today is feed wheat, unsuitable for human consumption but destined for animals.

This development goes against the core beliefs of farmers such as Gert Noordhoff, which is why he is one of the initiators of De Graanrepubliek: a cooperation between farmers and the companies that buy and process their grains. Among those companies is Hooghoudt, a Dutch genever distiller with strong ties to Groningen. Together, they are embarking on an ambitious agricultural adventure unique in the world of genever. This collaboration benefits farmers, the region’s biodiversity and the companies involved.

Sustainable farming sits at the heart of the philosophy of De Graanrepubliek, which literally translates as ‘the grain republic’ and also includes a bakery, brewery and pasta maker. The clay-rich soil of Oldambt and the surrounding area is ideal for many crops, not just grain. This highly fertile place is a by-product of the nearby Dollart, an estuary slowly created over many centuries, but much of the flooded land has since been reclaimed. “Cattle feed should not be grown here,” says Noordhoff, who’s part of a young generation of farmers looking to innovate without losing track of tradition. “At one point my grandfather cultivated 14 different crops, but nowadays you mostly just see winter wheat and maybe some beets. Introducing more diversity will create a new future for cereal crops.”

This future is sorely needed. Grain farming became all about yield after the Second World War, and understandably so. In the war’s final winter, the Dutch were hit by a devastating famine that shaped the country’s ensuing policy on agriculture. Famously, the creed of Sicco Mansholt, the first Dutch minister of agriculture after the war, became: “Hunger – never again!” This led to a policy that valued efficiency, aided by the development of new grain varieties, chemicals, and fertiliser. Yield became synonymous with quality. The resulting monoculture was extremely taxing to the soil, like asking a long-distance runner to compete in a marathon day after day without any time for a breather. Eventually the runner will tire and collapse, as will soil that is used continuously for just one crop.

De Graanrepubliek wants to break with this hunt for yield, instead focusing on strip cropping. This method involves cultivating a field partitioned into long, narrow strips alternated in a crop rotation system. Noordhoff says, “You need to grow less grain in order to grow better grain. For example, we’re growing Ölandsvete [a Swedish heritage wheat] on one of our fields that was previously used for another grain variety and red cabbage. It’s remarkable to see how well the Ölandsvete is doing on those former red cabbage strips. Quality is not just about the grain variety, but also about the crops that you decide to grow before and after you’re cultivating grains.”

Intrigued by the possibilities of a farming practice that focuses on quality, family-run Hooghoudt decided to join the cooperation. Like many big genever brands, the company doesn’t distil its own maltwine anymore, instead sourcing this flavourful base spirit for its genever from elsewhere. However, some time ago, the family committed all their efforts to bringing genever back to its former glory, a decision that included letting all profits flow back into the company for a period of 10 years. In recent years, resources have been spent on revamping the brand, but the company’s crowning achievement is yet to come. It will soon be needing a steady supply of grain, and lots of it – barley, rye, wheat, and spelt – all to be used in its new distillery where it will be making maltwine once again. Collaborating with farmers just made sense, to give the company complete control over its genevers.

When Hooghoudt joined De Graanrepubliek, it also brought a new perspective to the table. What had originally started out as an initiative to restore balance to the fields, bring back more diversity to crops and tend to a healthier soil now also became about growing for flavour. Cost price is not an initial concern. That means searching for – and researching – suitable grain varieties. Heritage varieties that were commonplace half a century and longer ago are being revived. Some will sound familiar to Scotch whisky drinkers, such as Golden Promise, Maris Otter and Bere barley. Others are more obscure but were once used by many local farmers, long before breeding new grain varieties became all about yield. Examples are Wilhelmina wheat and Mansholt barley, both of which were prevalent on the fields of Oldambt in the early 20th century. Using resources from the seed vault of Wageningen University, varieties like these are slowly cultivated over multiple growing seasons until there’s enough for farmers to harvest and for Hooghoudt to distil. Noordhoff says, “As farmers, we never really thought about how fusel oils in grains would impact flavour, but now it is at the forefront of everything we do. It’s about finding the right balance between a farmer’s level of influence, soil and grain variety.”

Hooghoudt’s new distillery will be located in Oldambt near the Dutch border with Germany, where De Graanrepubliek is in the process of converting an old railway roundhouse from 1877. It’s a semi-circular industrial building with an inviting ambience. The roundhouse originally had the capacity to store and service up to 12 steam locomotives, but it hasn’t been used as such for almost 90 years. In a foretelling part of the building’s history, it was used for grain storage in the 1980s and 1990s. Now, grain will again become the common thread for all activity inside the building, which won’t just be home to Hooghoudt, but will also house the other companies involved in De Graanrepubliek. It’s a future tourist destination where visitors can get insight into how local, sustainably farmed grain is processed by the bakery, brewery, pasta maker and genever distillery. A restaurant will serve food and drinks centring around the ingredients made on-site, which will also be available from a shop.

About a quarter of the former railway building is reserved for Hooghoudt. It plans to install two Mueller pot stills: one with a capacity of 500 litres, the other sized at 2,000 litres. A smaller mobile still will be employed for botanicals. Fermentation and storage tanks are going to be situated along the back wall, while there’ll also be a modest warehouse, meeting room and space for workshops. The first Hooghoudt genevers from the new distillery are expected sometime next year. These unaged genevers will champion the grains they’re made from. Hooghoudt currently refers to them as ‘oerjenever’, or primeval genever. Further down the road, Hooghoudt will start releasing aged genever from the new distillery as well, in addition to its current barrel-aged genevers. “The new distillery will be a playground for our distillers,” explains Laurens Speek, brand activation manager at Hooghoudt. “They’ll be experimenting with fermentation length, yeast, botanicals, and of course with grain varieties also.”

To celebrate Hooghoudt’s imminent return to distilling, earlier this year the company released two single-cask genevers from the last stock of its own maltwine. Right before Hooghoudt’s copper pot still was retired in 1998, third-generation family member Hero Jan Hooghoudt made one final batch of maltwine from 100 per cent malted barley. He filled the spirit into ex-oloroso sherry butts from his supplier in Spain, where they had been part of a sherry bodega’s solera system for 60 to 80 years. The resulting single-cask releases are more akin to whisky than gin. More importantly, they usher in a new era – not just for Hooghoudt, but possibly for the Dutch genever industry. Will other well-known Dutch genever brands dare to follow in Hooghoudt’s footsteps and revive the craft of maltwine distilling as well? Only the future will tell.