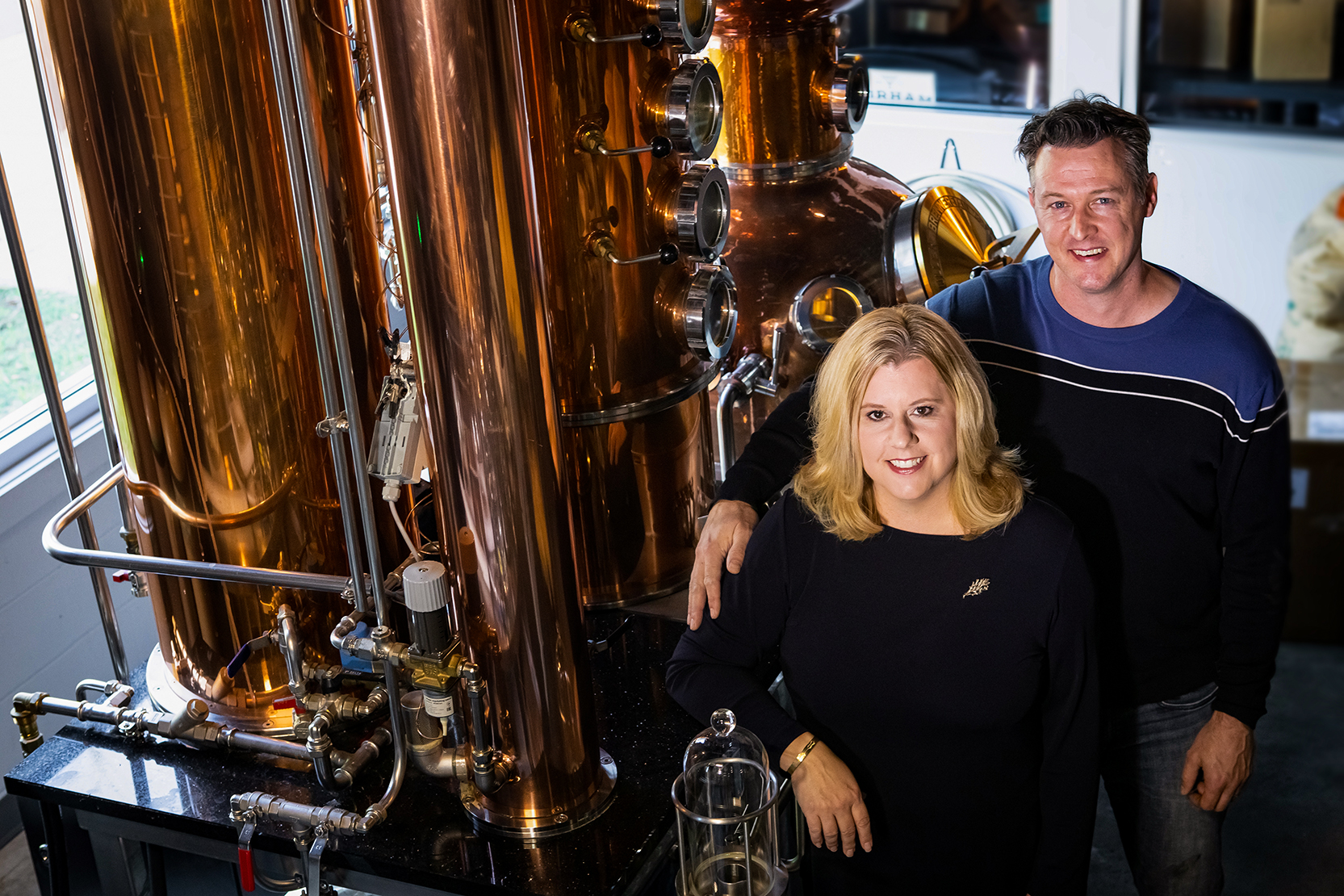 Melissa and Lee Katrincic are the co-founders of North Carolina’s Durham Distillery. Founded in 2015, gin has always been its focus. The distillery produces Conniption American Dry Gin, in addition to a Navy Strength Gin, a barrel-aged gin and several canned cocktails including a gin and tonic.

But most recently Melissa and Lee made headlines by founding the US Gin Association to help gin producers band together to advance the category stateside. We sat down with Melissa Katrincic to learn a bit about the association and their plans for American gin.

Aaron Knoll (AK): Firstly, what is the US Gin Association and why create a new association solely for US distillers?

Melissa Katrincic (MK): We founded the US Gin Association in 2021 with the intention of finding community for US gin distillers to move the category forward. It is not the white spirit of choice in the United States. That is vodka. So, not only do we have to really educate around the gin category,
we also have to provide an opportunity for both consumers and retailers to explore US gins – with the understanding that there are some really amazing gins being produced in this country.

We combat, as US gin distillers, the perception by retailers in this country that imported gins are superior to US gins.

AK: Tell me the story about what led you to found the US Gin Association.

MK: When Lee and I launched Conniption in 2015… we very quickly realised the layers of selling gin that were just not well understood. They’re not understood by the distributors and there are different ways to hook in a retailer, or hook in a restaurant or bar, to even care about a small gin versus the big guys – the imports – especially for the United States. So, we started to learn these processes and approaches over the next couple of years. It was really right around 2017, when Lee and I travelled over to London for Junipalooza and we realised how much organic passion for gin there really is and there still is today.

AK: How do you try and replicate that passion here?

MK: You have to start somewhere and one single brand trying to get through to that tipping point in the United States is really too much of a challenge. So, how do we together look at that? I saw the seeds of it with the Single Malt Association as they founded themselves in the US to not only get on with the [government] guidelines for labelling single malt but also to create passion with the retailers, the restaurants, and the consumer. At that stage [it] was fairly unknown and not well established in this country.

There are very few distilleries in this country who focus on gin, and what I mean by that is where probably 70 per cent [or more] of their revenue per year is from the gin that they distil. I don’t know… there’s probably fewer than 20 of us.

AK: Looking at your impressive list of charter members, you have some very senior and well-known members of the American gin community involved.

MK: The longer you’ve been in – progressing the gin category in the United States – the more you understand what the challenges are that we’re facing. As you’re growing gin in this country to try and not only have a foothold in your region but also growing into a national brand, which is extraordinarily difficult for any craft gin to reach. It’s really that “how do you learn from each other?” and “how do you make sure that what you’re putting together meets the needs of the category?”

AK: I know it’s early, but your initial membership is entirely composed of distillers. What are your plans for engaging with the larger community? As an example, what about bartenders?

MK: Yes. It’s very much a “crawl and walk before you run” approach. It’s going to take time, but building a foundation is critical to our success long term. I know what the Southeast challenges are, but I have absolutely no insight into what the Pacific Northwest challenges are. So, US gin distillers being the first approach is really about making sure… that we all have an ability to share what challenges we’re facing in our individual markets.

So, you can’t bring in bartenders and association with journalists or media until you can figure out what it is that you’re facing all in these different regions. How do you build programs that can cross over and not be customised to a specific region? Because that’s just not going to work.

AK: For our readers who haven’t been to the United States or experienced its size and diversity, could you elaborate a bit on why understanding regionality is so important?

MK: I will talk about it first from the industry side and then the consumer side.

From the industry side, trendlines that come into this country often come in first and foremost to the big metros. For example, a specific serve of a G&T for a specific gin was not even an approach in this country until we saw it cross over from Spain and England, to New York and Chicago. Once it gets enough traction by industry in those metros, it does go out to [other] regions …

So you’ve got that, [but] a consumer’s exposure to the gin category is very much based upon what has been approved and what is being sold in their state. There is no national direct-to-consumer ability to order. There is no Amazon ordering of spirits in this country. So, what they have is only what they see that has been sold to the liquor store in their neighbourhood.

AK: There are many gin organisations around the world – one major, well-known one being the Gin Guild. How is the US Gin Association different?

MK: We are not at all thinking that we’re a replica of the Gin Guild. The purpose for the US Gin Association really remains a way to strategically grow the category [locally] and get to that tipping point in the United States. The Gin Guild, on the other hand, is so much more of an authority on what’s happening in gin internationally … I would still want all of our members to become Gin Guild members.

I think that [they’re] complementary. If they’re going in, selling a gin and able to say that they’ve been inducted into the Gin Guild, that brings a weight, and the conversation gets elevated right away – [it means] that I know what I’m talking about.

AK: What initiatives have you undertaken thus far or are planning for the next year for the association?

MK: We are very much a fledgling organisation at this stage … Our goal for this year is to finalise the formation and then agree as a group to the strategic priorities that we would have for the next 18 to 24 months. Those strategic priorities include what kind of programming we want to put together for education for retailers and education for the consumer, and then whether or not we would have the ability to layer in a differentiator at the point of sale. That might be a sticker on the bottle, it might be a shelf talker – things that would identify that gin as a US Gin Association gin, and that distillery as part of this initiative.

AK: What is your vision for the next 10 years of the US Gin Association?

AK: Then how about the next two?

MK: I’m so passionate about the gin category in this country, and I see a real opportunity for the mindset to change with our consumers and our retailers that gin is not only a worthy category, but a growing one.

If you were to walk into any liquor store in any state in this country, they would all approach the gin shelf differently. It’s a mix and mash of all different styles of gin, because there’s not an understanding of the different styles and categories of gin here. Imports and domestic are all mixed in! Different price points are mixed in! Flavoured gins are mixed in, and the consumer is so confused when they see that shelf. In 10 years, I would like a consumer to know what the categories of gin are, how they’re different from one another, and how they apply in a cocktail. To walk into a retailer, be able to ask really sophisticated questions, get responses, and go to the gin shelf and see it organised appropriately.

That, for me, is because we’re starting at ground zero. There’s not an understanding of what vodka versus gin is and there certainly isn’t an understanding here of what London dry versus contemporary is. So, we’re working through those layers [and] deniability to the fact that gin is really such an expansive category in and of itself.