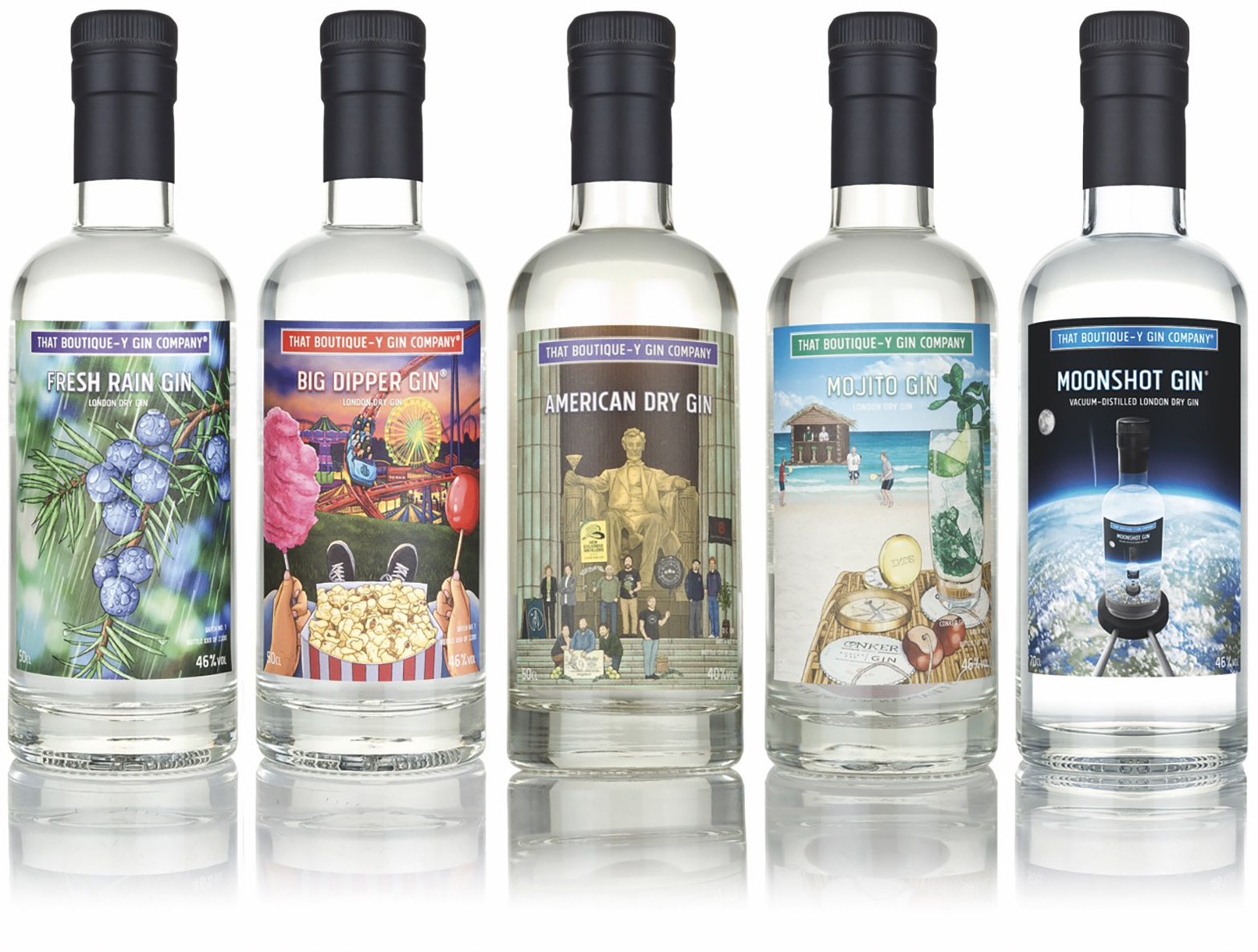 Meet That Boutique-y Gin Company: the independent bottler that uses world-class gins as a platform to explore fresh and innovative ideas

The gin industry is one of creativity, building experiences through the senses to convey stories: a place, a time, a snapshot of a moment. Creativity is the life source and collaboration fuels the fire: those sparks of chinking flint, minds working together, sparking ideas and accomplishing something that may not have occurred at otherwise. I mean, what’s more fun than creating something together?

There have been some fantastic collaborations in recent years. Four Pillars is certainly deserving of a mention, launching incredible products such as Spice Trade Gin in collaboration with India’s Stranger and Sons. But this article is really focused on That Boutique-y Gin Company (TBGC), which has produced an incredible spectrum of ideas across everything from gins evoking fresh rain, to gins that are an uncanny foreshadowing of events to come. This may sound too odd to be true, but sometimes truth is stranger than fiction.

David T. Smith explains the concept: “That Boutique-y Gin Company is split into two parts: one is creating fun gins with the internal gin at Atom, producing gins such as Spit Roasted Pineapple and Moonshot. The other part is focused on collaborations with existing distillers, where we work together on a concept, the distillers make the spirit, and Rosie Milsom [global head of NPD at Atom Brands] and the team at Atom Supply do the rest.”

Each bottle features a hand-designed label relevant to what’s inside; for a collaboration, the label almost always features those that have collaborated on it. For example, its Shortcross Estate-Foraged Gin features David T. Smith foraging on the label, as he did in person. The labels are designed by artist Grace J. Ward, who is in a way collaborating with TBGC by doing this.

One of the simplest ways to create is to build on something that already exists, to twist and tweak and blur the lines of what we know. So, when TBGC partnered with Conker Gin and rum legend Pete Holland, both based in Dorset, the resulting gin makes an awful lot of sense. Mojito Gin is a hybrid of gin and rum made with a molasses base as opposed to wheat and distilled with mint and lime for a bright, zesty, cool gin that is great for sipping on a hot day. It was important for TBGC to keep the input local. Conker created the gin, and Pete tested the samples, inputting feedback and suggestions until the gin was ready for production.

I asked Rupert Holloway, founder of Conker, to tell me a little bit about the process. “We were honoured to be approached, to be honest,” he said. “TBGC had previously collaborated with a long list of distilleries we greatly admired. Their request was left field, too – something we enjoy here! How do you capture the flavours of the infamous Mojito in a distilled gin? No mean feat. Luckily, this collaboration had a third strand to its bow in the form of Peter Holland, known locally in Bournemouth as ‘Mr Rum’ and rum guru at the That Boutique-y Rum Company.

“It was an exciting R&D process exploring the Mojito cocktail and how best to bring this across through the distillation of botanicals. We landed on swapping out our wheat spirit for a molasses spirit, instantly lifting the gin to the heady, sweeter ester notes found in rum. We then distilled this spirit with huge quantities of fresh lime peel and mint to create a wonderful celebration of the fresh flavours of the Mojito.”

In April 2017, a gin summit was held in Washington, DC by the American Distilling Institute. To commemorate this prestigious event, bringing distillers together from around the world, a gin was created to celebrate the local DC distilling scene. Five local distilleries each created their own distillates, which were then blended to make the finished product.

Alex Laufer, co-founder and CEO of District Made Spirits tells me, “David Smith approached us in November 2016 to produce a gin in time for the gin summit. He asked each distillery to provide a juniper distillate, then we each chose one or two botanical distillates to bring to the blend. We distilled Appalachian allspice and angelica. New Columbia Distillers distilled rosemary. Joseph Magnus distilled fresh oro blanco grapefruit. District Distilling distilled hops and tarragon.

“The base distillate compositions were different in each case. We and District Distilling distilled our own rye bases. New Columbia distilled a wheat base. Joseph Magnus and Republic Restoratives use corn NGS [neutral grain spirit]. The distillates were blended, proofed down and bottled – with everyone’s help – at our distillery.”

DC Gin is a remarkable snapshot of what was happening in DC at the time: a soft, slinky nose of creamy citrus and light florals; grapefruit posset, creamy juniper and rye bread on the palate, followed by floral, leafy notes and aromatic tarragon; then, towards the end, the oro blanco pops back with earthy angelica and a peek of rose and violet. It brings a unique opportunity to connect with somewhere over a great distance, and now a time in the past, with some of the distilleries that contributed no longer in operation.

“I love the analogy of a snapshot,” explains Alex. “Often when I talk about distilling, I liken the process of distilling, especially how the spirit changes coming off the still or how the spirit matures in a barrel, to a movie, changing from scene to scene. The final product in a bottle is a still photograph. In some ways our collaborative gin does reflect the different styles of our five distilleries, new to the craft of distilling, but as with most gins, the final result is greater than the sum of its parts.”

Back in 2019, Masons of Yorkshire began working with TBGC on Smouldering Heights Gin, an ode to the annual burning of heathland in Yorkshire to renew the earth and encourage new growth of the area’s foliage and wildflowers. The recipe had been developed, and the gin was in production, when disaster struck.

The fire at Masons of Yorkshire’s distillery was an enormous shock to the community. Thankfully, no one was hurt, but owners Karl and Cathy Mason watched their business burn down in a day. The Masons and their team had the enormous and potentially overwhelming task of cleaning up and starting again. With the support of the community, they were able to do this and now acknowledge the event with their own Phoenix gin. Smouldering Heights was still released through TBGC, and that spooky prediction of events has been immortalised in a gin that is packed with lively floral and fruity notes with a lingering hint of earthy smoke in the background. Its botanicals include beech- and peat-smoked malt, heather, and Szechuan pepper.

In 2018, I attended a launch party in London where TBGC was releasing a series of gins in collaboration with fragrance specialist Lizzie Ostrom from Odette Toilette. She worked with the team to create four gins: Fresh Rain, based on the idea of petrichor (the smell of rain falling on dry earth); Beware of the Woods, based on a primordial forest; Dead King, using aromatics that are used in embalming; and Big Dipper, capturing the essence of a fairground, everything from dinky donuts to the grease used to keep rides limber for the wailing thrill-seeker. At the end of the event, attendees were given a goody bag including a box of roll-on scent bottles, each containing a gin to roll on the wrist like a perfume. It’s a pretty neat concept, right? But of course, they went one further, working with artist Phillipa Staunton who produced a series of paintings that used synaesthesia – where the brain connects the experiences of one sense to another – to express the gins in colour.

It’s all good being creative, but how good are the products? A clumsily rendered pasta elephant could well stay up on the fridge for years, but a clumsy gin is a one-time purchase. These gins generally come out the same standard as everything that went in, and it’s top-notch stuff – so much so, that TBGC’s collaboration with Hernö, Swedish Rose Gin, not only won a gold outstanding at the International Wine and Spirit Competition, but went on to pick up the competition’s London Dry Gin trophy in 2017.

Creating can be exhausting and TBGC is a little quieter nowadays. There are still a fair few of its releases up for grabs online and there is always the possibility of something new coming out down the line. But for now, it seems that there is a little pause from that frantic flow of creativity. And that’s OK. Other distilleries are picking up the baton. You could say that ideas may eventually run out, but with all the wonderful minds in the gin industry, I’m not sure that’s coming any time soon. Like the colliding of atoms, molecules and compounds, every new input creates a whole host of possibilities and eventual outcomes.

0 comments on “That Boutique-y Gin Company: The spirit of collaboration”