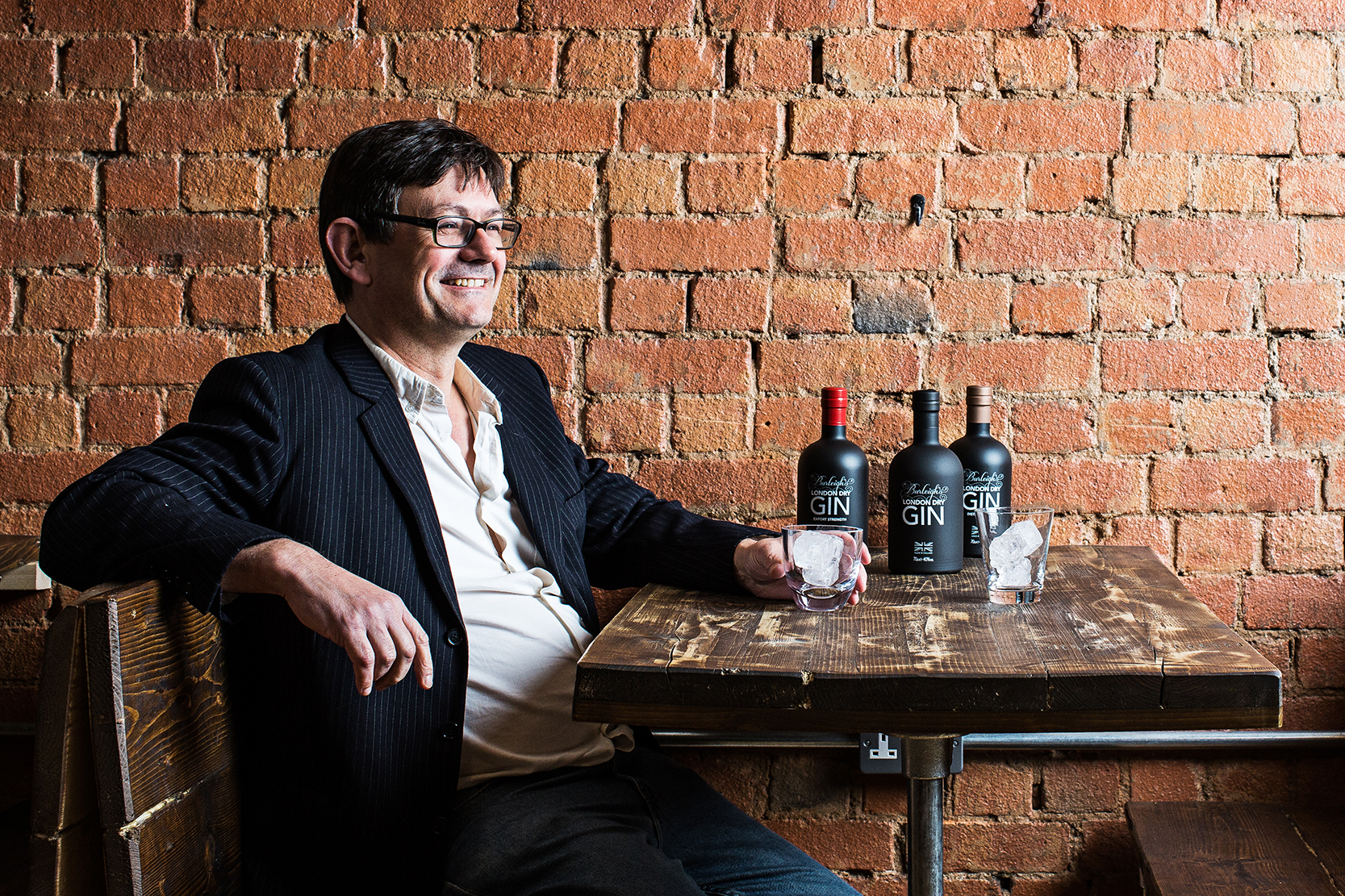 “It’s just another way of processing starch, really,” Jamie Baxter says. He’s telling me about the breakfast cereal company he owned before he “accidentally” fell into the world of spirits and launched his successful distilling consultancy. After selling his company to European cereals giant Morning Foods in around 2006, he was approached by William Chase, founder of English potato crisp brand Tyrells, who wanted a way to add value to the cereal crops he was growing in rotation with his spuds.

“He took me on [and] we were going to build Tyrells muesli factory,” Baxter explains. “Just before I joined the company I had booked to go on holiday, so five or six weeks after starting I went off on two weeks of holiday. When I came back, I found he’d cancelled all the orders for all the equipment that I had placed and he said, ‘Jamie, muesli’s really boring, how do you fancy making potato vodka instead?’. I thought about it for a nanosecond and thought, ‘this could be fun, let’s give it a go’.”

None of the team had any distilling experience, so Baxter spent a year teaching himself how to distil and designing what would become Chase Distillery. Launched in 2008, the distillery’s potato vodka – a novel product in England at the time – was winning international plaudits within six months of launch. Its first gin release followed in 2009.

Baxter says, “You have to remember that at that time small-scale distilling simply wasn’t allowed… We didn’t realise that Sipsmith were starting up in London at the same time, and Ian Hart was starting Sacred Spirits… We didn’t know, so it wasn’t a race, but we won, I think – we got out a month or so before Sipsmith did.”

Upon leaving Chase Distillery in 2011, Baxter decided to put his hard-earned distilling knowledge to use helping others to start up. He launched his own consultancy, now Craft Distilling Services Ltd. Working behind the scenes plays well to his personality; by his own admission he is not a salesman, and his real strength lies in operational management and product development.

The UK’s gin boom was still in its embryonic stages, with a smattering of craft players on the scene – including Portobello Road in London, The Botanist on Islay, and Anno Gin in Kent, alongside Sipsmith, Scared and Chase – but Baxter sensed the direction of travel. The first year was sluggish, but then came a phone call from Jonathan Clark, asking for help to set up his new gin venture, the City of London Distillery. (The first distillery in the UK to set up inside a bar, and still the only gin distillery in the Square Mile, it is now owned by Halewood Artisanal Spirits and is home to both Whitley Neill and the City of London gins.)

Business has increased exponentially in the years since, with projects across gin, whisky, rum, and even absinthe in the UK and further afield (recent overseas consultees include companies in France, Kenya and Asia). While it’s not the only spirit he works with, gin has made up the bulk of Baxter’s consultancy work – and it’s easy to see why.

Following explosive growth in the past eight or so years, gin is now the second-largest spirits category by value in the UK (and has been nipping at vodka’s heels for the number-one spot since 2019, according to data in William Grant & Sons’ 2020 and 2021 Trending reports). Compared to other spirits such as whisky or rum, it is relatively cheap to set up and kit out a gin distillery, and that equipment will produce a greater volume of gin than it would of any other spirit. Also, you don’t have to age gin – it can be through the still, into a bottle and out to consumers in just a few weeks, unlike whisky, which will need years in a cask before you make a penny off it – and this swift route from production to sale is enticing. As Baxter puts it, “We are in this business to make money, not to make gin. You can make a lovely gin, but if you’re not profitable, then you won’t be making it for very long.”

Baxter’s consulting process runs the gamut of distilling: sometimes it’s something as simple as advising on recipe development, but more commonly, he provides a turnkey solution. He talks to clients to understand their needs, goals and budget, then assists in distillery set-up, equipment purchasing and installation, recipe development, licensing and tax, and trains them to distil on their new equipment. “Many people that we work with are from outside the industry and often they need quite a lot of hand-holding,” he says. “It’s not just a question of teaching them how to distil, it is trying to point them in the right direction for the whole business.”

While many of his consultancy projects are protected by non-disclosure agreements, Baxter reveals a few names he has worked with: Salcombe Distilling Co. in Devon, which is now pushing its products in America and has established the first gin distillery at sea with P&O Cruises; Greensand Ridge, founded by Will Edge on a platform of sustainability, carbon negativity and minimal waste (“I really like [Will’s] ethos and the way he works”); and the brand-new Galway City Distillery in Ireland, a bar-based distillery which is “elevating” gin distillation to mirror the sophistication of the area’s Michelin-starred restaurants.

He is also pleased to see former protégés achieve such success that they can court major conglomerates, as happened with Chase and City of London distilleries – although, as a distiller, he admits to being a little disappointed by “hard-headed” entrepreneurs who “don’t get carried away with the romance of the spirit”.

Since the first potato-based spirit ran off the stills at Chase Distillery, the gin landscape has changed immeasurably. The market is no longer dominated by a few megalithic players; it is perfectly legitimate to make gin on a small scale and stick to selling locally, and there are hundreds of brands in the UK doing just that. However, for clients taking this approach, Baxter recommends a greater focus on direct-to-consumer sales – for example, selling through an online shop – which tend to have higher margins than selling through distributors, wholesalers or hospitality venues. And, while “owning your little patch” is important, Baxter says there is no shame in dreaming big. He uses another of his projects, Burleighs Gin, as an example: soon after launching, the distillery got a foothold in Japan. “It was fantastic to go out to Tokyo and get the product going over there, and this is from a tiny little distillery in rural Leicestershire,” he says.

Baxter doesn’t just consult on distilling – he also teaches it. He runs a week-long course around five times a year with Brew-School in Bakewell, Derbyshire, on how to set up a distillery. It attracts participants from around the world. One of his alumni is Nick Malaczynski, founder of Shivering Mountain Gin, who was looking for a more hands-on job after years working as a financier. “I’ve heard this a lot, from lots of different people, they’re getting a bit bored of sitting in front of a computer looking at spreadsheets all day – they want to actually make something with their hands, and Nick decided that gin might be an option,” Baxter says. “He’s making very nice product and putting it in a stunningly attractive bottle, and I don’t think he realises quite the position he’s in, because he has people approaching him asking to buy the product, rather than him having to go out to try and sell it.”

Baxter certainly doesn’t think the gin bubble is ready to burst yet, stating that most of his increasing number of enquiries from abroad are gin related. “The love for gin is spreading beyond the UK and has been doing for a few years now, and other countries want to put their own twist on it. Australia’s a good example for that – there is nothing that defines an Australian gin, but somehow they are all just a little bit different. I teach a course once a year in America, teaching American distillers how to make gin, because it is not an understood category over there and there’s loads of potential there for somebody to get it right.”

For people considering their own craft distilling project, Baxter warns against the “smoke and mirrors” that pervade and advises a healthy dose of scepticism. He also shares a tip from a friend, distiller and author Marcel Thompson: “He’s always asked, ‘How long is it going to take to build a distillery and how much is it going to cost me’? And he says, ‘It’s like a piece of four-by-two timber: it’ll either take four times as long as you think and cost twice as much, or it’ll cost four times as much as you think and take twice as long.’ And that’s a really good answer, because it’s so true. But, by using a good consultant, you can avoid a lot of the expensive mistakes that too many people are making, and also do it safely.”