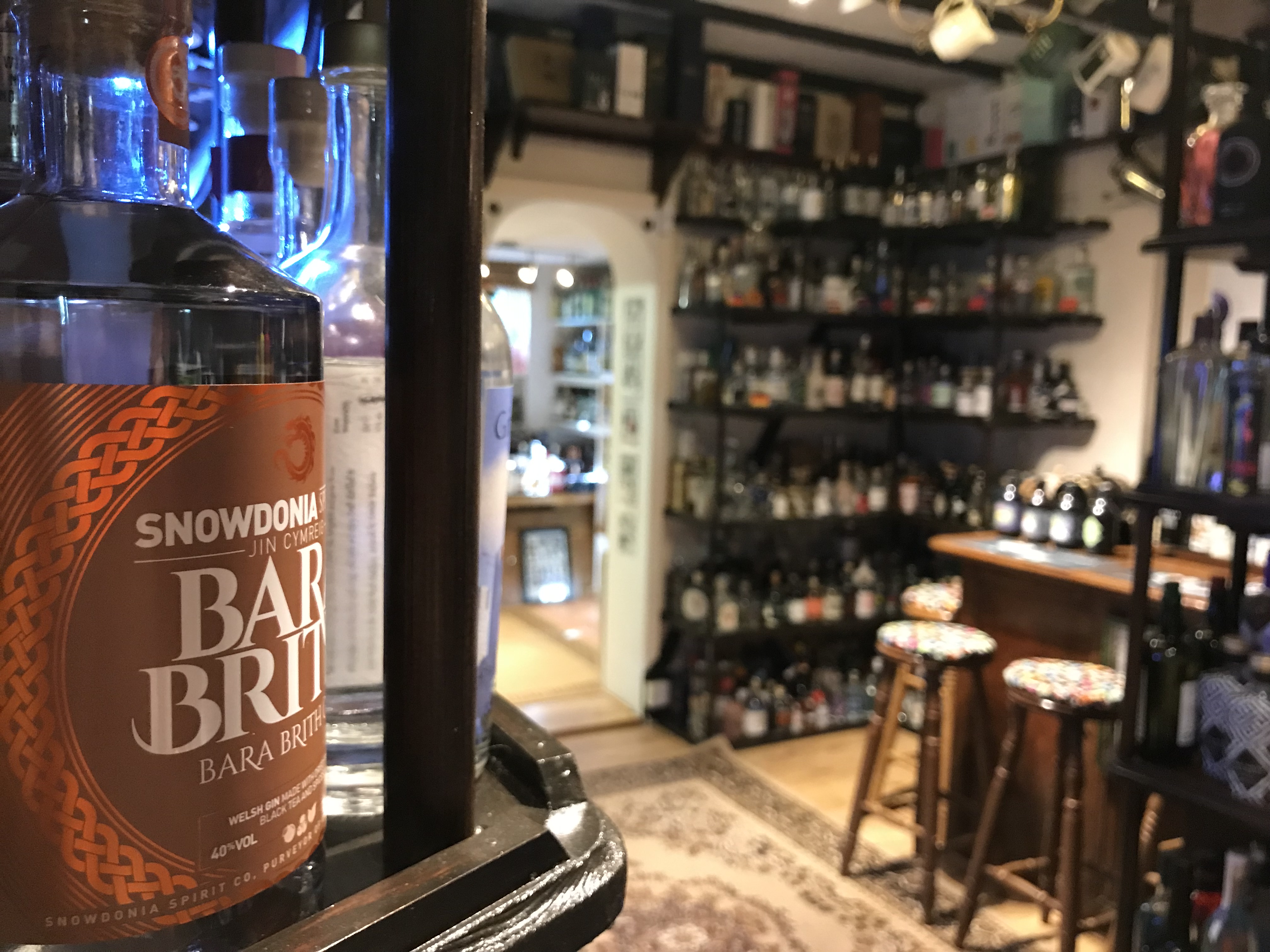 For a fan of anything, there are few greater pleasures than having the chance to explore the object of your fandom in depth. In the world of gin, perhaps the ultimate experience of this nature would be exploring the Gin Archive.

Described by some visitors as an ‘Aladdin’s Cave’, the Archive contains roughly 5,500 bottles of gin from more than 60 countries around the world. Alongside the bottles are a near-innumerable number of items of branded gin memorabilia, from cocktail glasses, ice buckets and water jugs to posters, vintage gin weights, lampshades and clocks.

The Archive was started by England-based couple Mr and Mrs Roberts, and access is strictly by invitation only. When I visit on a warm August day, I’m accompanied by gin expert David T. Smith. Since the Archive’s early days, he has been consulting on the collection and contributing bottles. This time, he has brought with him some treasures from a recent trip to South Africa. “It’s like Christmas,” Mrs Roberts smiles, as she investigates the haul.

Our tour starts in room one, the walls of which read like a ‘who’s who’ of British gin. There are shelves dedicated to Bombay Sapphire, Hendrick’s, Beefeater, Gordon’s and Sipsmith, plus an entire cabinet of bottles and paraphernalia from Booths (the world’s oldest continuously made gin brand, dating back to 1740).

The next room takes us on a trip around the world: Germany, Greece, South Africa, Belgium, Tanzania, the Philippines, Japan and Cambodia are among the countries represented. A tiny pot still sits atop a small bar, nestled among the ceiling-height shelves.

Venturing deeper, there are two back rooms lined wall-to-wall with bottles. One room is dedicated to the United Kingdom, while the other primarily contains gins from North America and Spain. The final two rooms house mainly paraphernalia, including plenty of barware, and cocktail glasses of all shapes and sizes hung artfully on ceiling runners.

Mr and Mrs Roberts began their collection in 2008 with a well-known brand, Tanqueray – specifically, a bottle of the original Tanqueray Malacca Gin. Mr Roberts explains, “We set the goal to have 100 gins. Once reached, we thought maybe a gin for each day of the year – so 365 gins. After that, it was 1,000, and then every gin we could find. Now, it is more a case of what gins are being donated to the project or what we find interesting or unusual and within our Archive budget.”

Hidden among the collection are some rare gems. The British Collection from Germany’s Hannover Gin comprises limited editions made using botanicals donated by British visitors. Spanish brand 100&no more, which makes no more than 100 bottles of each of its experimental gins, has a few expressions present. Room one boasts the rare Hendrick’s Kanaracuni, distilled with the Amazonian scorpion tail plant.

Perhaps the rarest exhibit in the Archive is Gin 1495 from French distiller Maison Villevert. The two-bottle set is not commercially available; the couple secured theirs at a blind auction held in aid of the Distillers Benevolent Fund (all the other sets were given away). They were invited to a special lunch in London to receive the two gins, Verbatim and Interpretatio, which were presented in a leather-bound case.

Following closely behind on the rarity scale is a bottle of Cambridge Distillery’s Watenshi Gin. It is produced by distilling at incredibly low atmospheric pressure and temperature to capture the delicately flavoured ‘angel’s share’ – spirit which is ordinarily lost to evaporation. It takes 50 distillation runs to glean enough liquid for one bottle, with only six bottles released each year. Retailing for £2,500, Watenshi was the most expensive gin in the world when it launched.

At first, Mr and Mrs Roberts collected any gin they could find (back in 2009/2010 there were barely 100 gins available worldwide). Today, they are choosier about what they get, looking for limited releases, special editions, and interesting or rare botanicals. They have almost-full collections from brands such as Tarquin’s, Beefeater, Hernö and Monkey 47 (although the latter’s Distiller’s Cut gins, allocated annually by random draw, have proved harder to come by).

The couple take regular trips overseas to hunt for and collect gins, apply to raffles for limited-edition expressions, and take donations from brands and globe-trotting friends. They also have ‘agents’ in countries including the USA, Germany, Denmark, Spain and Greece who keep an eye out for new or unusual gins and ship them over. Occasionally they buy from auctions, although they say the secondary market is getting prohibitively expensive as it attracts more ‘flippers’; who purchase rare gins from distilleries and sell them on, often at inflated prices.

While the Gin Archive is not open to the public, it is possible to browse its shelves virtually on the Gin Archive website. This ginny encyclopaedia lists the collection’s gins alphabetically, and by type, country, ABV, and distillery. (The couple caveat that the website is still a work in progress – at the time of writing, there were around 1,000 gins still to be added.) It also has an instagram channel, @theginarchive.

“From 1 January 2022, we have been sharing the whole collection via Instagram posts on a country by country basis, and in some cases a gin by gin basis, as we have substantive collections of certain brands within the archive collection,” Mr Roberts explains. “This is taking rather longer than expected… thus far we have managed to cover countries to include most of Belgium, plus some specific brands.”

Since its inception the Gin Archive has been independent and non-commercial, and Mr and Mrs Roberts intend to keep it that way to avoid the “commitments” to brands or activities that come with commercial activity. “We wish to remain totally independent and enjoy the collection as an interest for ourselves and others,” Mr Roberts says.

While at first they tasted all the gins that came into their possession, in recent times this has become impracticable. Mrs Roberts estimates they have tried around one-third of the gins in the collection, for example where duplicates were acquired, bottles arrived open, or brands sent additional samples for tasting. They also taste all they can when visiting distilleries, gin shows or specialist bars.

On the all-important question of gin cocktails, Mrs Roberts says her preferred drink is a Basil Smash, while Mr Roberts prefers a Churchill-style Martini (the former British prime minister famously said that he preferred to drink his Martinis while “observ[ing] the vermouth from across the room”).

While the collection at the Gin Archive is already sizeable, the couple believe they have enough space to double it on their current site. While they are many years away from retiring from collecting, they say that the Archive could eventually be donated to a gin museum, or find some similar public or commercial use. Mr Roberts elaborates, “The aim is to have as many gins as possible from as many countries as possible. We hope in the future that each gin will be listed with key botanicals and any other interesting information, so as to provide a useful research tool for anyone working with or loving gin, and for the collection to be part of a physical record of the 21st-century gin craze.”

0 comments on “Inside the world’s biggest private gin collection”