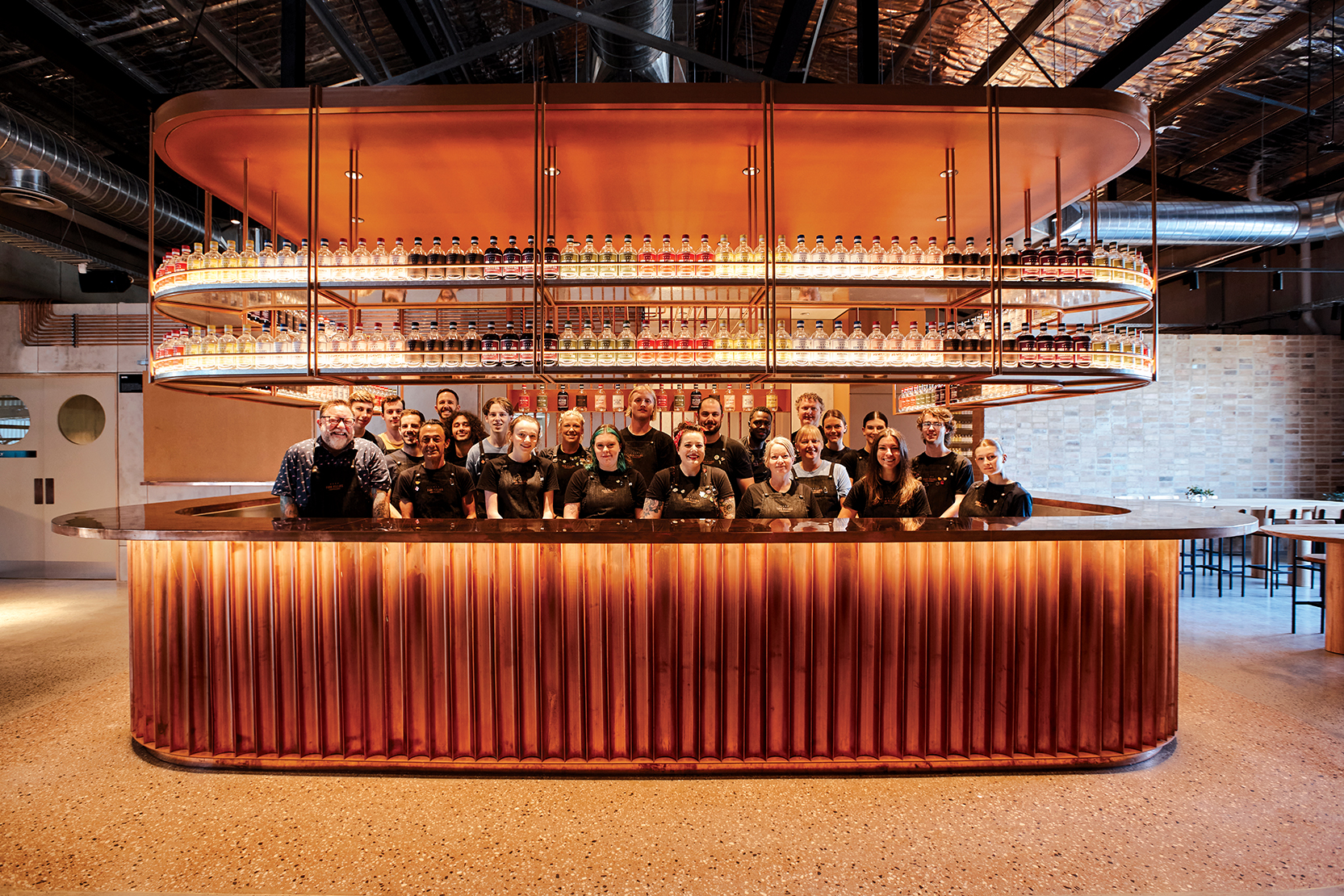 The hospitality sector’s supply chain is estimated to be responsible for 15 per cent of all greenhouse gas emissions in the UK and yet, despite being part of such a notoriously wasteful industry, bars have been relatively slow to confront their environmental impact.

It came naturally to Ryan Chetiyawardana, a Buddhist and a biologist as well as a bartender and founder, to consider his impact on others and the planet. But when he opened East London’s White Lyan in 2013 – a bar which shunned ice, perishables and brands and was, by his own admission, “pretty extreme to put it mildly” – it was perceived as something of an affront to an industry that couldn’t reconcile sustainability with the luxury product and experience it was promoting.

But then, in 2015, a video of a marine biologist removing a plastic straw from a turtle’s nose went viral, prompting a sea change in attitude which was accelerated by both public demand and the pandemic. The UK’s ban on plastic straws in 2020 was the first step in a clear trend which most bar groups are now trying to adopt, and some pioneers have made an integral part of how they do business.

Removing wasteful garnishes – such as the coffee beans that grace many an Espresso Martini – and withdrawing single-use items such as napkins, while undoubtedly impactful on a large scale, is merely tinkering on the margins. Although, to give Revolution Bars its due, it has also committed to achieve net-zero by 2030, 20 years ahead of the UK’s legal deadline, in part by improving energy efficiency within its premises.

Indeed, The Net Zero Pubs and Bars Initiative, launched last summer, found that its pilot sites used an average of 30 per cent more energy than best practice guidance, and advised that pubs could achieve a 10 per cent reduction in carbon emissions just by switching to a renewable electricity supplier.

The initiative’s certification process provides venues with a roadmap to measure the climate impact of their full value chain, enabling them to then mitigate, and compensate for, their emissions. Although different styles of venues face different challenges, the forecast footprint of Glastonbury’s first Net Zero Now-certified bar makes interesting reading: of the 18 tonnes of CO2e (carbon dioxide equivalent) that the Rabbit Hole bar was expected to produce in relation to the festival (including upstream purchasing and transport and downstream derig and waste), 35 per cent was attributed solely to the drinks, with a footprint of 0.91kg CO2e per serve.

The sizeable footprint of spirits is one of the reasons Stephen Mutty at Silo – the London restaurant founded by Douglas McMaster and hailed by Ryan Chetiyawardana as “the only actual sustainable venue” – keeps his drinks list deliberately small. Sourcing the right brands to work with, based on both their current environmental credentials and future plans, and buying in refillable bulk format is also integral to minimising Silo’s waste streams and impact.

One of Stephen’s recent successes was sourcing Arbikie’s carbon-negative Nàdar Gin in ecoSPIRIT format. A world’s first closed-loop distribution system, ecoSPIRITS’ returnable and refillable 4.5-litre totes eliminate 70–90 per cent of the CO2 associated with the packaging and distribution of spirits compared to single-use glass bottles. Now offering more than 30 brands, including Beefeater, Citadelle and Never Never Triple Juniper gin, to more than 1,000 venues in 12 countries, ecoSPIRITS is also launching a pilot programme with Accolade Wines in Australia in August 2022.

Bulk delivery formats aren’t a new concept – Boxer Gin first offered its 2.8-litre polylaminate pouches to the on-trade in 2012 – but it’s an idea that has caught on particularly with smaller brands keen to serve their local community. James Porteous at Edinburgh’s Electric Spirit Co. was first inspired to explore bulk delivery options when he learnt that The Palmerston restaurant received its cooking wine in kegs. With an agreement in place to use Achroous as the house gin, James agreed a rolling refill system using 5-litre stainless steel kegs wrapped in striking orange Tuscan leather. With each keg saving 4.5kg of weight (and related emissions) compared to the equivalent amount of bottled gin, it’s a popular concept which is now offered to other local venues (without the leather wrap!) via Royal Mile Whiskies, whose depot is only 1.3 miles from the distillery.

Wales’s Silver Circle Distillery has taken a similar approach, offering its pre-batched cocktails in 5-litre jerry cans for busy bars like Propyard in Bristol. Eliminating the use of 10 glass bottles per can, pre-batched cocktails also save staff time and, if chilled prior to service, can dramatically reduce the amount of ice a venue requires. Given the high energy demands of most commercial ice machines, and the inefficiencies of many – water-cooled machines consume approximately 100–150 litres of water per 10kg of ice – it is something that any bar with sustainable ambitions should consider.

Providing products in bulk format risks producers losing visibility on the backbar – indeed, Silo doesn’t have one – but it’s a risk James Porteous deems necessary. “This type of returnable, zero-waste system is the future of spirits in the on-trade. It’ll be a big adjustment, and it’ll scare a lot of brands who rely on visual presence to sell their product… but it’s unquestionably worth it.” While James ponders what the backbar might look like if bottles are no longer required to pour from, Hepple Spirits has found a different solution which sees its stunning 10-litre Hepple glass balloon take pride of place in venues such as London’s Booking Office 1869, while a separate 25-litre drum can be returned and refilled as necessary.

For a truly sustainable experience, there’s nothing like sipping something that’s been distilled on site. At Four Pillars’ new carbon-neutral distillery in Australia’s Yarra Valley, it will save a staggering 29 tonnes of glass per year by ingeniously piping gin directly into the main bar through an eye-catching array of copper pipes and serving kegged tonic water. Meanwhile, on the other side of the world, London Essence has launched draught tonic on tap which reduces the need for packaging by 96 per cent.

Oslo’s Himkok bar also houses a distillery, powered by renewable hydroelectricity, that produces more than 80 per cent of the spirits served in the bar. The only gins on offer are the four made on site, including an Old Tom diluted with birch sap. Himkok also collaborates with local producers and farmers to source ingredients as locally as possible and uses high-grade fine wine and apple acidities to replace lemon and lime in all but its classic cocktails.

This farm-to-table approach, which offers full traceability and reduces carbon emissions, has gathered momentum in the drinks industry. At Adam Handling’s Ugly Butterfly, in Cornwall’s incredible Carbis Bay, as much as possible is sourced locally, as a whole ingredient, with the bar using “trims” and “offcuts” from the kitchen to create drinks, garnishes and snacks. The life of seasonal ingredients is also extended by creating cordials, distillates, ferments and shrubs, which form the foundation of the venue’s signature cocktails and are also displayed in its “wall of jars”, used to explain the ethos of each drink to guests.

Sydney’s RE – founded by Matt Whiley, previously of Scout – takes a holistic approach to sustainability and is, like Silo, built from the ground up using mostly recycled materials, including a bar top made from milk bottles and light fixtures made from mycelium (a material derived from mushrooms). Whereas Silo’s drinks offering takes inspiration – and some offcuts – from its kitchen, and only uses ingredients that are grown or foraged locally, Matt has taken the concept one step further. Launched in October 2021, Matt’s Never Wasted initiative collects food “waste” and by-products from eight nearby venues and suppliers, alongside surplus fruit and vegetables from Sydney’s markets, to create RE’s cocktail menu. His ambitious aims are to grow the initiative to include all hospitality venues across the city, and to cut food waste by 80 per cent.

If the pandemic accelerated awareness of, and commitment to, environmental sustainability it also shone a bright light on the importance of human sustainability. After everything the hospitality industry has been through recently, recruiting, retaining and supporting staff has to be at the top of everyone’s agenda, as it is at Himkok, where bar manager Maroš Dzurus declares a sustainable working environment is more important than a sustainable bar.

Bartenders have an almost unique opportunity to engage every person who joins them for a drink, and to act as a conduit between producer and consumer. They can’t do it all – government action is required too – but the ability to create sustainable cocktails from “waste” is a magic only master mixologists can employ to persuade people of the power of a drink that not only tastes good, but does good too.

0 comments on “Hospitality venues setting the bar for sustainability”