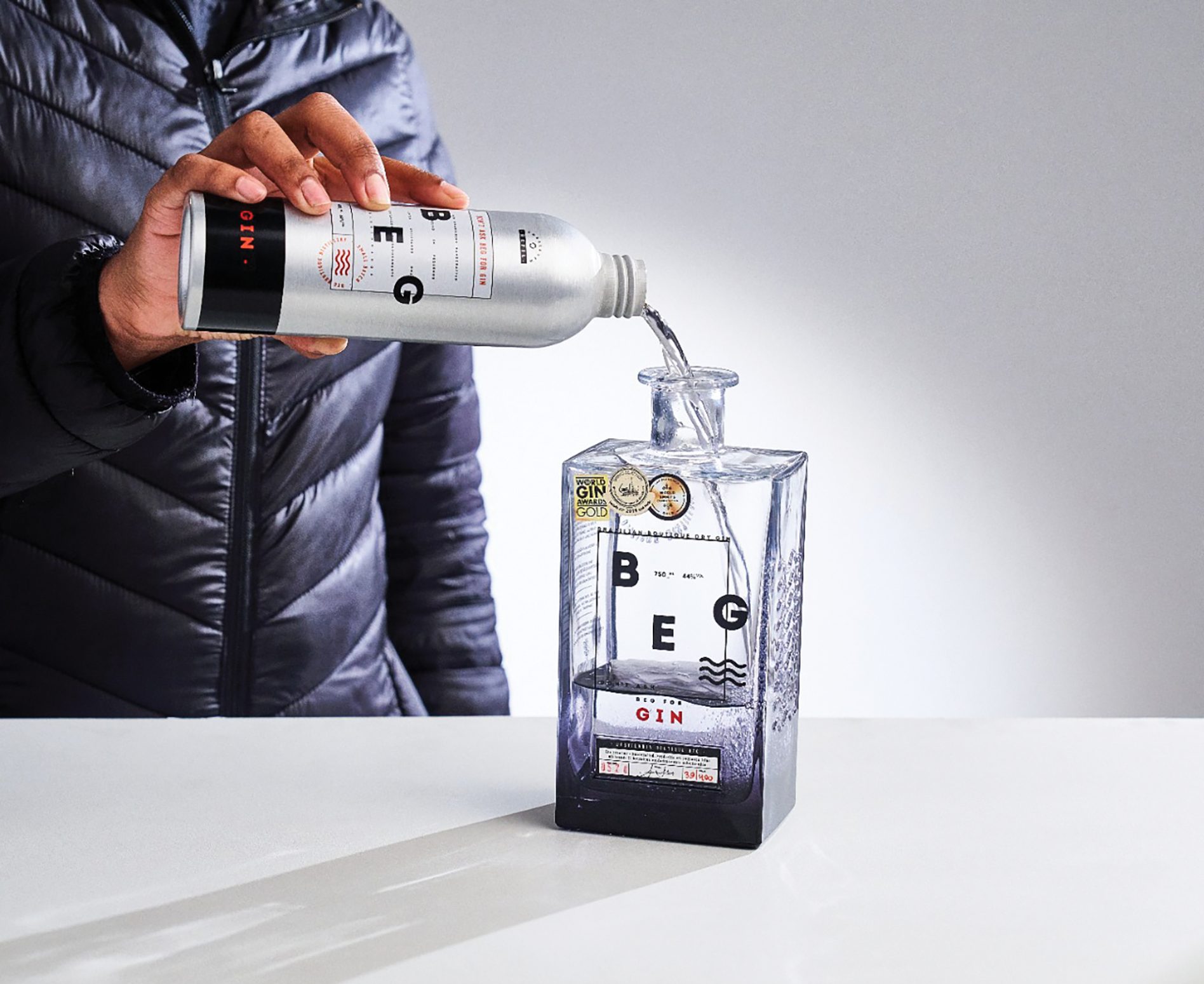 When it comes to spirits packaging, the gin industry is one of the most creative. But with sustainability a growing concern for consumers and producers alike, a beautiful bespoke bottle is no longer enough to cut it. While many brands are reducing the weight and plastic content of their bottles, innovative and eco-conscious businesses are leading the way in reducing the impact of all their packaging on our planet.

As the most conspicuous part of a product, and arguably the easiest to change, it’s easy to assume that environmentally friendly packaging is simply an attempt to greenwash the gin within. However, with 6 per cent of all packaging waste (by weight) in municipal waste streams attributed to beverage containers (according to the Beverage Industry Environmental Roundtable) – and 24-37 per cent of a spirit’s carbon footprint attributed to its packaging – reducing, reusing and recycling is critical.

Extended Producer Responsibility (EPR) for packaging will be introduced in the UK in 2024, forcing producers to pay the full cost of the treatment or disposal of post-consumer products, so it’s little wonder this issue is high on everyone’s agenda. However, it was also accelerated by the pandemic, which brought about an increase in online and direct-to-consumer sales and also made customers more aware of the level of waste in their home.

Launched in April 2021, Green Man Woodland Gin from Silent Pool Distillers hit the headlines as the world’s first spirit in a paperboard bottle. The Frugal Bottle weighs just 83g – up to five times lighter than an average glass bottle. Consisting of a food-grade pouch inside a chemical-free recycled paperboard bottle, its carbon footprint is 77-84 per cent lower than a glass bottle and also means producers do not need to purchase or print additional labels.

Not everyone is a fan, though. Abbie Neilson, co-founder of Cooper King Distillery, praises its reduced weight but believes it is misleading to describe the composite product as a paper bottle. More concerningly, the plastic pouch comprises 16 per cent of the packaging, but less than 4 per cent of plastic film is currently recycled in the UK. “This means 96 per cent of the plastic in the composite bottles in circulation will end up in landfill, which, if widely adopted, would amount to a considerable volume,” Neilson argues.

Like 90 per cent of the industry, Cooper King is (for now, at least) sticking with glass, which preserves the quality of its contents and is infinitely recyclable. However, producing glass – by fusing raw materials in furnaces at temperatures of 1,300-1,500°C – is exceptionally energy intensive. In 2020 alone, ecoSPIRITS estimates the world produced 40 billion single-use glass spirit bottles, leading to 22 million tons of carbon emissions.

Scotland’s North Point Distillery has reduced the carbon footprint of its bottle by using post-consumer recycled (PCR) glass, which has been reclaimed from the end-user, crushed, melted down and used to make a new product. Such closed-loop bottle-to-bottle recycling avoids the extraction of further virgin raw materials, and mitigates CO2 emissions by reducing the energy consumption of the furnace. Using 100 per cent PCR glass does mean accepting imperfections and a lack of clarity, but North Point has embraced and complemented this look with its organic-ink screen-printed design. Unfortunately, single-stream recycling systems (in which all recyclables, including glass, paper and aluminium, are placed in a single bin) mean it is virtually impossible to make 100 per cent PCR glass in the UK, which is why North Point’s bottles are imported from Italy. However, at approximately 500g, they are considerably lighter than many, and are transported by sea freight, rather than air, to reduce the associated emissions which the distillery then also offsets.

York Gin’s cardboard packaging is made within 50 miles of the distillery from sustainably managed forests, while its new bottles travel just 27 miles from Leeds-based manufacturer Allied Glass, rather than 600 miles from the previous manufacturer in France, reducing the carbon cost of transport by more than 95 per cent. The bottle weight has also been reduced by 42 per cent, to 609g, and they feature labels made locally in Bradford. While York Gin’s 700ml bottle is currently made with premium flint, which contains zero recycled glass, its 50ml miniatures are made with standard flint, containing a minimum of 49 per cent recycled glass.

Cute though they may look, miniatures offer poor value for consumers and poor margins for producers, and the terrible glass–spirit ratio of the single-use item also means they come with a big carbon footprint. Cooper King Distillery instead offers its carbon-negative gins in sharing selection boxes containing three 100ml samples, giving customers both better value for money and a greater opportunity to get to know the range.

Buying in bulk – so to speak – can also offer environmental advantages and is the concept behind Cuckoostone’s GinZoil 120 Proof, packaged in 100 per cent recyclable one-litre aluminium bottles. Not only that, but GinZoil is packaged at 60% ABV, making it equivalent to two regular 700ml bottles of 42% ABV gin, but with less weight, less waste and a significantly smaller carbon footprint.

Aluminium bottles are yet to become commonplace, but they are gaining ground in the refill market as pioneered by Max Chater at Victory Distillery. Brazil’s BEG Gin and Scotland’s Shoogle Spirits and Isle of Harris Distillery all offer 500ml aluminium refill bottles, which are nine times lighter than glass and also need less protective wrapping in transit, meaning less waste and less impact through distribution.

Dunnet Bay Distillers is also keen to pursue 100 per cent PCR aluminium refills, but with high demand for the material, no one is currently accepting requests for bespoke 700ml bottles, so it is sticking with plastic pouches for now. While there are unavoidable issues in creating single-use plastic from virgin materials, the pouches now consist of one material rather than four, making them easier to recycle either through Dunnet Bay’s freepost return scheme in collaboration with Terracycle, or at some supermarkets. The pouches are also incredibly lightweight at just 17g and have a significantly lower carbon footprint than Rock Rose’s iconic ceramic bottles. The distillery is also investigating the possibility of reusing the pouches.

With the exception of onsite refill schemes – such as East London Liquor Company’s ground-breaking project in which it refills, and applies a new label with duty stamp to any empty 700ml bottle (not just those which previously contained its own products) – producers also have to consider the environmental (and financial) cost of shipping to consumers. Reducing weight is a guaranteed way to reduce carbon footprint, which is where light, letterbox-friendly plastic pouches may have the advantage, but most producers are also considering the materials they use to ship their bottles. As part of efforts to go plastic free, many are turning their back on inflatable plastic Airsacs and embracing paper tape and cardboard solutions such as Flexi-Hex’s honeycomb sleeves. Rather than purchase a new product, Ulverston’s Shed 1 Distillery invested in a shredder to recycle cardboard it receives into netting for outgoing shipments, while Wales’ Jin Talog ingeniously uses the wool shorn from its rare-breed Balwen sheep to cushion bottles in transit!

Shipment isn’t the end of the story, of course, and it is crucial to consider the full lifecycle of the product from cradle to grave. While increasing numbers of businesses encourage brand loyalty by operating a “bottle for life” and refill scheme, some also actively encourage the upcycling of their bottles, such as Dunnet Bay, which sells pumps to convert its ceramic bottles into soap dispensers. Scotland’s Crafty Distillery took this concept further in the redesign of its Hills & Harbour Gin bottle. Not only is the new UK-made glass bottle 30 per cent lighter than previously, at 530g, but it also offers industry-leading functionality with a 12.5ml measure built into the natural wood and cork stopper. Even the bottle’s short neck and unique wide opening have been designed to make it easier to upcycle.

There’s no guarantee a customer will refill, reuse or even recycle a bottle, but it is imperative that producers use materials that are, in theory, easy to dispose of. However, that’s where the waters begin to get muddy. Not only does it rest on consumers to do the right thing, but, with recycling schemes differing both between countries and within them, that right thing may vary depending on where they live. With Scotland launching a controversial Deposit Return Scheme next year – which will apply to all producers who sell in Scotland, not just to those based there – those waters are likely to get muddier.

0 comments on “Is your favourite gin brand using sustainable packaging?”