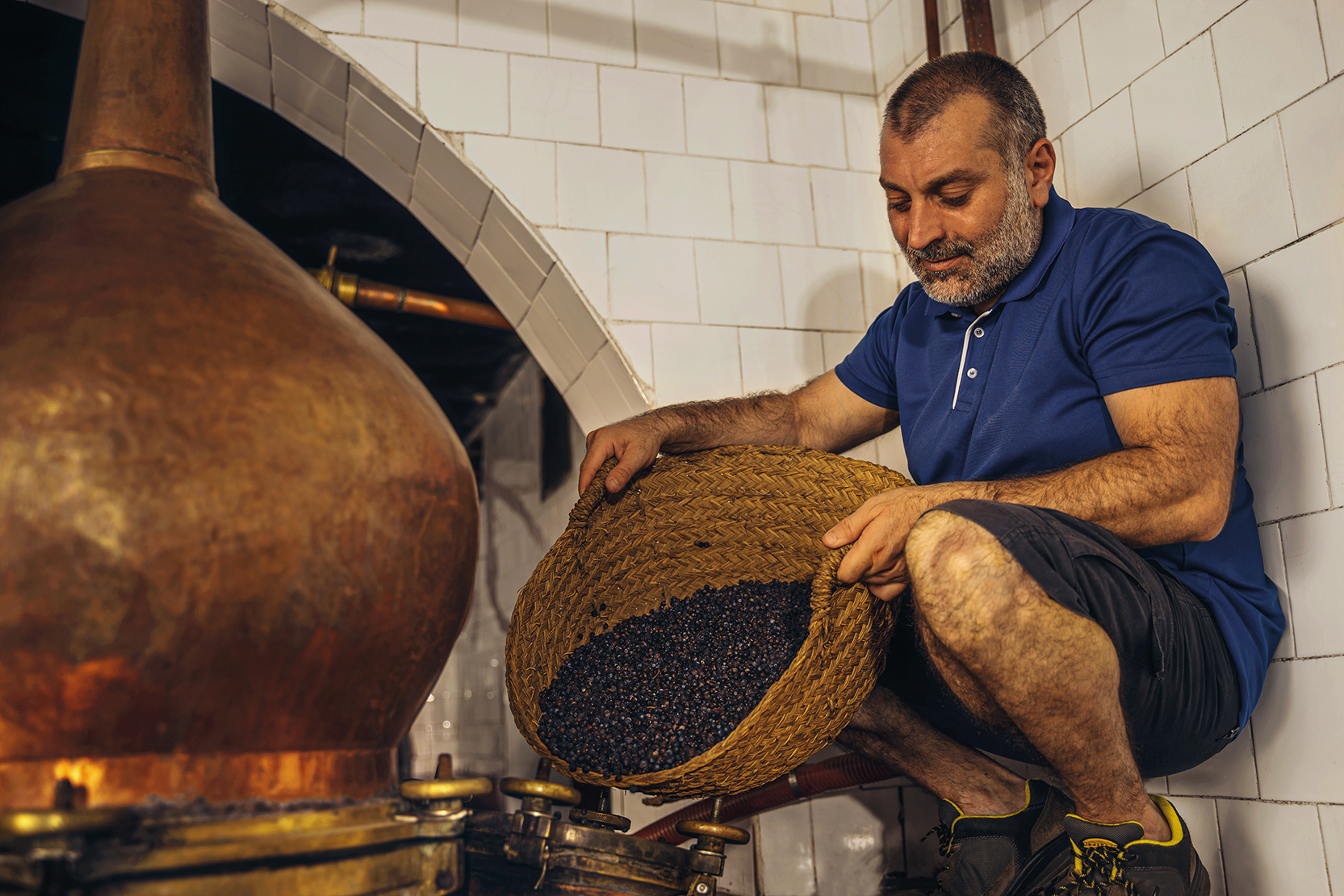 Gin de Mahon, one of few protected by a geographical indication, exemplifies the varied influences on Menorcan culture

If there’s one sauce capable of beating ketchup as the world’s most popular, it must be mayo. It’s found in virtually any country on earth, served in both fast food eateries and white-tablecloth restaurants. Mayonnaise is often believed to have originated in France, but it’s in fact more likely to have originated in the port town of Mahon, capital of Menorca, in Spain’s Balearic Islands. According to a 19th-century French dictionary by scholar Émile Littré, it was born there as “Mahonnaise”, at a time when the French, Spanish and British empires were fighting over the dominion of the archipelago.

Like mayo, much of Menorcan culture and history shows signs of the island’s colonial past. The port of Mahon is strategically positioned in the Mediterranean, which makes it a particularly coveted target for any maritime power keen to control the Mare Nostrum. The town, located at the inner end of a four-mile-long bay, was easily defendable from hostile ships. Furthermore, the island itself is at comparable distance from Barcelona, Marseille, Sardinia and the north-African coast.

After a century of British rule, Menorca was finally handed over to Spain in 1802, yet the Brits left behind clear traces of their passage. Not only are these evident in some of Menorca’s architecture, but in its drinking culture too, as the island is believed to be responsible for the first gin ever produced in the Mediterranean.

“The first distillery here made gin like it was made in England, with juniper and about eight or nine botanicals,” says José Carlos Camps, of Destilerías Xoriguer. He says that his distillery was originally called Fornero, after the name of the family that founded it back in the 18th century. Still in the same family’s hands two centuries later, it became Destilerías Xoriguer in 1945, when a fire led to the death of its owner and Miguel Pons Justo took over the business.

Today, Xoriguer is the only distillery left on the island, but it’s believed that Menorca had at some point seven or more production sites, “and that’s in an island that’s just 30 miles long,” Camps points out. He argues that the proliferation of gin distilleries during Menorca’s colonial times came as a response to Britain’s 18th-century Gin Craze. When gin was blamed as one of the primary causes of crime in London, a series of reforms were enacted in order to reduce the consumption of the spirit in Britain. “You know ‘Gin Lane’?,” says Camps, hinting at a well-known 18th-century print by English artist William Hogarth depicting the Craze. “Distilleries on the island were trying to cater to the English market at a time when things were difficult for gin in Britain. The Brits came here and taught Menorcans how to make gin, just so that they could smuggle it back to England.”

In support of his theory, Camps mentions that the island’s historical registers record a significant inbound juniper trade, “but with nothing going out… we didn’t have that many people to ever need all that juniper for ourselves,” he says.

While the British certainly had an influence on the growth of the local spirits industry, Menorca developed its own unique gin style, whose artisanal production method has for some decades been protected by a dedicated geographical indication (GI), Gin de Mahon.

The method involves a one-stage distillation undertaken in the distillery’s 250-year-old, 700-litre alembic, heated solely by wood from Menorca’s forests. In the past, gin was also rested in wooden barrels before bottling, yet today it’s bottled immediately after distillation.

Xoriguer’s recipe dates back to 1736. It consists of juniper berries sourced from the Catalan Pyrenees, grape juice spirit, and local well water, all blended together and distilled in one go.

“The original recipe looked at the gin made in the Netherlands to develop what will become the gin of Mahon. We only use one botanical, juniper, which is more similar to the Dutch style,” says Camps, quoting recent research that proves how trade with the Dutch had a significant impact on the development of Mahon’s gin style.

“We try to make a distillation that doesn’t require other steps, so what you have inside the bottle is mostly undiluted spirit. That being said, our production method is very artisanal. We don’t have any technology to control the temperature of distillation, so we might end up with a spirit that’s between 40% and 46% ABV, and we might have to dilute a bit to get it down to 38% ABV.”

The resulting spirit is a clear, fragrant, well-defined gin that manages to capture the real essence of its sole botanical, with aromas that range from juniper itself to green wood, herbs and zesty citrus, a broad, fresh finish, and a peppery aftertaste.

Camps argues that Xoriguer’s artisanal method lends the gin ageing potential. “After one year, the taste starts to develop, you get more of the juniper and the lemon character drops a little,” he says. The romantically imprecise production method, and vintage variations in the character of the juniper, mean that the gin’s profile might vary slightly from batch to batch, too: “If you drink our gin now and a different bottle next year, the taste will be different. That’s mostly because of our old-style method, but also because the juniper is always different.”

While Xoriguer betrays a certain degree of Dutch influence on the island, Menorca’s spirits landscape by no means lacks stylistic diversity. Once independently produced, gins such as Beltrand, Mica and Son Petit are now all made at Xoriguer distillery, which acquired these historical Menorcan brands over the course of the past century. As per GI specifications, all are produced according to the traditional Menorcan method, yet the recipes – unchanged since the brands’ acquisitions – differ significantly from each other. “Whenever we were offered to buy a distillery, we always kept the original recipes alive. We only produce limited quantities of each of them, but it was important for us not to let those gins die,” says Camps.

Beltran is a citrus-led expression made with nine botanicals, including angelica root, lemon peel, cardamom and coriander; Mica owes its floral-driven nose to a dozen herbs and spices, including parsley; and Son Petit consists of some 14 botanicals, blended to achieve a marked earthy and herbaceous profile. Alongside its gins, the island also produces a number of traditional liquors. Flor de Vent is an aniseed-driven botanical spirit based on a recipe from 1895 that involves cinnamon and vanilla, while Palo is a traditional amaro-like liquor. It can either be consumed as an aperitif, or mixed with equal parts of Gin de Mahon in a Menorcan classic, the Fil Ferro (the Iron Wire). Indeed, while Menorcan gins’ diversity means the spirits can be used in a range of classic cocktails, the island boasts a number of indigenous serves, the Pomada being the most popular of all: Gin de Mahon mixed with lemon or lemonade – usually in a one to three ratio – often garnished with a lemon wedge and a sprig of mint. It’s consumed year-round, yet enormous quantities are quaffed during the Festival de San Juan, a historical celebration held annually in June, during which skilful riders and beautiful horses populate the western town of Ciutadella de Menorca, festooned for the occasion.

However, while Gin de Mahon lends itself well to cocktails, the locals love Ginet: Gin de Mahon on its own, chilled, straight from the fridge. For Camps, that’s another element that Menorcans borrowed from the Dutch. “People think that our gin history is just related to Britain, but actually, this drinking habit shows that the Dutch have had a big influence on our gin culture too,” he says.

Neither Dutch nor British in style, the gins of Mahon pride themselves on having a unique, quintessentially islander personality, as multi-layered and complex as Menorca’s colonial history.