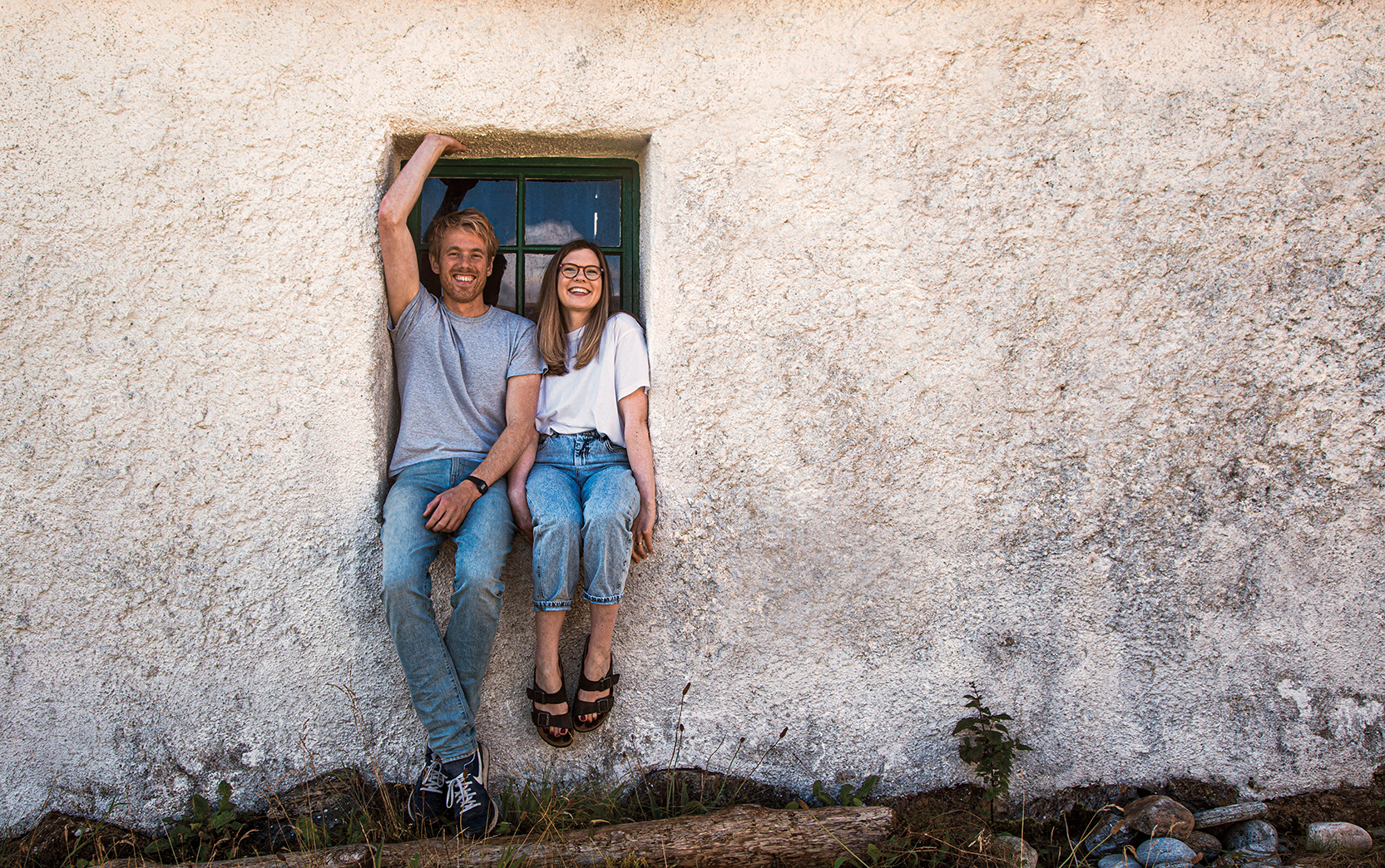 The founders of North Uist Distillery are hoping to bring not just great spirits, but a great tourist experience to their beloved Hebridean home

Like many people who grow up on the island of North Uist, in Scotland’s Outer Hebrides, Jonny Ingledew and Kate MacDonald left their family homes as young adults to pursue careers in mainland Britain.

“We were away for about 14 years, and went all over, but spent quite a lot of time in Aberdeen, walking around the Cairngorms and visiting whisky distilleries,” Kate explains. “They tell you it is all about the specialness of the ingredients.”

Seeing the pride with which these distillers spoke about their local bounty got the couple thinking: perhaps spirits with a similar provenance-led story could be made on North Uist, as they have on countless other Scottish islands, from Islay to Orkney.

In pursuit of their ambition, Jonny completed a masters in brewing and distilling at Edinburgh’s Heriot-Watt University. The couple returned to the island in 2017 and, following exhaustive planning, launched North Uist Distillery in 2019.

Opening a distillery was not just a first for Jonny and Kate, but also for the island itself. While, like many parts of Scotland, it was rife with illicit distilling operations before reforms to spirits legislation in the late 18th century, North Uist has never actually had a legal distillery. Blazing any new trail comes with a certain amount of pressure, and in a close-knit community like North Uist, the project’s success or failure will be felt not only by its instigators but also by the wider community. However, the couple have been clear on their goal from the outset: to produce spirits that reflect the island on which they were raised, and to which they both yearned to return.

First and foremost, North Uist will be a whisky distillery – Jonny and Kate recently placed an order for fermentation and distilling equipment and hope to lay down their first new-make spirit in the coming months – but its spirits range started with Downpour Gin, first released in late 2019. From the get-go, Jonny and Kate say they have tried to do as much as possible in-house, from recipe development to distilling and bottling.

To create their gin recipe, the couple enlisted the help of renowned forager and owner of Galloway Wild Foods Mark Williams, who helped The Botanist to develop its recipe with 22 hand-foraged Islay  botanicals. Jonny recounts driving around the winding roads of North Uist with Mark in the passenger seat, his nose glued to the window as he scanned the verges. “Suddenly Mark would yell ‘stop!’
and I’d pull the car over, and he would jump out and pick something he had spotted while we were driving down the road at 50mph,” he laughs.

With Mark’s assistance, they amassed a library of 200 botanicals; each was individually distilled, and the distillates nosed and tasted, before they started work on a recipe.

Jonny explains, “We like citrus-forward gin, so we started building a recipe around that. We honed in on wild heather, which is synonymous with the Hebrides… For our core gin, we wanted something that was quite synonymous with Scotland, and [heather] gives it a floral, honeyed character.”

He continues, “We noticed when we were trying the competitor brands that when you add tonic water, the product was getting a bit drowned out. We thought there was space in the market for a gin that tasted a bit stronger … With our Downpour Gin, we set out to make a gin that was really highly flavoured. A standard gin has around 37g of botanicals per bottle, and we have 80g per bottle. That is what [the name] Downpour relates to: it is a downpour of flavour.”

The policy of strongly flavoured gin has been applied to subsequent releases: Downpour Sloe and Bramble Gin has a significantly higher fruit content than comparable products (and is only scantly sweetened to preserve the fruits’ tart flavour), while the Pink Grapefruit Gin is distilled with a relatively large proportion of citrus peels.

The next big project at North Uist will be its whisky distillery. Jonny says the planned half-ton set-up will allow them to lay down around 300 casks of whisky a year, which will all be distilled from local barley. “It will be a beautiful traditional Scotch whisky distillery with proper copper pot stills,” he enthuses. The couple decided against fitting out the distillery to produce their own neutral grain spirit (NGS) for Downpour Gin, saying current production levels don’t justify the significant cost of purchasing the necessary extra equipment. Kate explains that, as there are currently no GNS distilleries in Scotland, they buy their base spirit from a producer in England; however, they are in discussions with a company that is looking to build an NGS facility in the Scottish Borders.

One key whisky-making component has already been put to use at the distillery: its Sloe and Bramble Gin includes a proportion of cask-aged gin, which was matured for 12 months in oak barrels before being blended with a second batch of gin infused with fresh sloes and brambles. Jonny says that the stones in the sloes lend a marzipan note to the gin, which marries with vanilla tones from the oak. Casks have also been utilised in North Uist’s first premixed cocktail, the Oak Aged Negroni, the liquid for which was soaked with orange peels before being filled into casks.

The whisky distillery project is the cornerstone of an ongoing scheme of renovations at North Uist. After initially opening in an industrial unit, the distillery now occupies one of the oldest buildings on the island: a former livestock steadings that dates back to the 14th century and has appeared in local myths and songs written at a time when Scotch Gaelic was the island’s primary language. “The building was worth visiting whether we were there or not – we just see ourselves as custodians of it for as long as we are there,” Kate says.

Ultimately, Jonny and Kate want their distillery to be a community resource. May saw the opening of the new Island Life bar, with a more relaxed courtyard bar set to open later this year. Gin tastings are run five days a week and begin with a distillery tour, which includes a potted history of the island and the site. Meanwhile, the space that will be their whisky distillery is currently hosting an art exhibition.

The site has come on a fair way since Kate and Jonny first threw open the doors in 2021, when the building was, as Kate puts it, “needing some TLC”. “But we saw 10,000 people come through the doors, and we had not even put a sign up,” she says. “The distillery is on the Isle of Benbecula. It’s the most central place between [the Uists], so there is a lot of footfall.” In 2022, they hope visitor numbers will reach 15,000–20,000 – which would be quite a feat, considering that the Uists are a three-and-a-half-hour ferry ride from the nearest mainland port, Mallaig, and almost two hours by sea from the Isle of Skye. “North Uist does feel like an untouched gem of the Outer Hebrides,” Jonny muses. “The number of tourists is growing, and we welcome them with open arms, but other islands like Harris and Lewis or Barra are so much better known.”

As great as their degree of separation from mainland Scotland is, it is surpassed by the degree of closeness that Kate and Jonny have to their fellow islanders. The distillery team now totals 10 people, but, as Kate explains, “It’s not just 10 people we work with – it is 10 people who we also live with on the island, we know their families, and some of them have been able to move back to the island, just like we did, because of the jobs that we have created for them.”

Jonny and Kate have hit a particularly important nail on the head here. Distilleries can play a significant role in the job market in remoter parts of Scotland. On Islay, for example, Bruichladdich distillery – just one of nine operational distilleries – is the island’s largest private employer. The presence of distilleries provides not just employment opportunities, but the possibility of career progression for young islanders who may otherwise have been forced to leave to find work. In addition, it elevates, and provides collaborative opportunities for, the region’s other main employment sectors: agriculture and tourism.

North Uist Distillery’s community connection encompasses volunteer efforts, too. To help with the gathering of fruit for its Sloe and Bramble Gin, the distillery operates a barter system: local residents can bring in bags of fruit and exchange them for a bottle of gin. The distillery has produced batches of gin (around 35 and counting) with fruit picked from specific areas, naming them after the place that bore the fruit. “People here like to have that association with place,” Kate says, “and they like to get that bottle from the batch [of gin] that they helped to forage for.”

With the sturdy foundations it has already built, North Uist Distillery looks
set to continue its positive local impact – while putting out some great spirits, to boot.

0 comments on “North Uist Distillery: A taste of the Outer Hebrides”