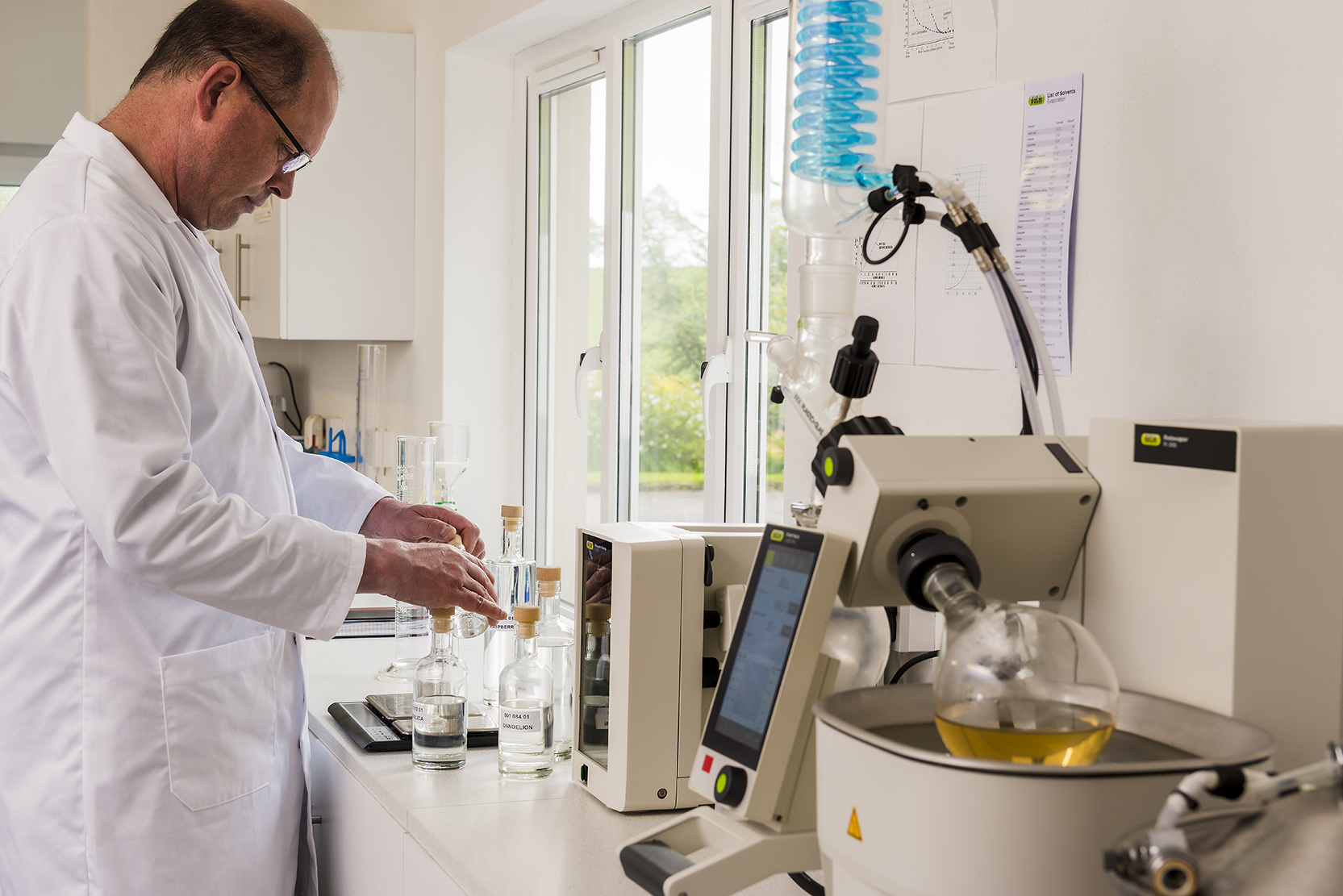 I first spoke to Ulrich Dyer of Woodlab Distillery in Northern Ireland around a year ago, maybe longer. I was researching interesting distillation methods and was pointed in his direction. “Microwave distillation” was the term used, and it stirred an interest in me… I imagined a microwave like you’d have at home, and couldn’t visualise a regular microwave among the shiny copper pots of a traditional distillery. Then, in the space of a 45-minute conversation with Ulrich, I felt I’d gone up a grade in science. In short, what Ulrich is doing with gin is remarkable, and I’d like to tell you why. I hope you’re all sitting comfortably. Open your notebooks to a fresh page, class, and pens at the ready.

To understand the ideas behind Symphonia Gin, Woodlab Distillery’s flagship spirit range, we need a little understanding of Ulrich. He is a self-confessed science geek and has loved chemistry since his teacher first inspired him at school. So, he went on to study it at degree level, then for a PhD. From there, he went Harvard, and then worked in the industry for some 30 years. Working in the pharmaceutical sector, he focused on making production more efficient in terms of resources such as energy and materials. So, when he decided on a change of career, he considered what would happen if he applied his knowledge to distillation – with amazing results. At Woodlab Distillery, which he set up around three years ago, his Symphonia gins are made with a combination of microwave hydrodistillation and rotovap (rotary evaporator) cold distillation; he also utilises gas chromatography. The purpose of this is to make his processes as efficient as possible, reducing his distillery’s carbon footprint as well as its running cost. How much difference does this actually make? A game-changing amount.

There are three processes at play here. So, let’s walk through these processes of making Ulrich’s gin, shining a light on each.

Firstly, Ulrich uses his micropowered hydrodistillation still to extract the “precious essence” of the botanicals prior to distillation. “Hydrodistillation has been around since the mists of time, around the same time as alcohol distillation,” Ulrich muses. Nowadays, it’s done with an industrial microwave, what Ulrich calls “a very efficient source of energy”: it excites the water molecules that are naturally present in botanicals, causing them to break open the plant cells and release flavours and aromas. You are left with a little water, with the oil essence of the botanical floating on the top and easy to separate.

Ulrich takes the oil, adds a little neutral grain spirit (NGS), and puts this mixture through his rotovap. The rotovap operates under a lower pressure to distil at room temperature, meaning the fresher notes of the botanicals are not affected by higher heats, as they are in a traditional still. Due to the way that compounds in the botanicals react at different times, this method gives Ulrich the power to ultimately take cuts of whatever part of that botanical he is looking for. This way, he could create several highly concentrated distillates offering different profiles of the same botanical.

“I distil each of the botanicals individually, and then I compose them into my individual Symphonias,” Ulrich explains. So, he chooses essences and blends them to make the base, then adds NGS to dilute the highly concentrated distillates into the final gin.

How does this differ from traditional distillation? In many ways. Traditionally, botanicals are put into the still, with NGS and water (to prevent the botanicals from burning). The NGS initially begins to capture the flavours of the botanicals in a process known as maceration. In some instances, botanicals will be left to macerate for up to 24 hours prior to distillation. Then, the stills are heated up and the NGS begins to evaporate. It takes the flavours absorbed through maceration with it, along with additional flavours drawn from the botanicals as they’re agitated with heat. Heat changes compounds, so flavours can change from fresh and bright to cooked and deep – think strawberries versus strawberry jam.

These differences in process have several important outcomes. Firstly, there’s the energy consumption. Woodlab Distillery’s process eliminates the need for the large amount of water used in a traditional pot distillation, as well as the energy expended on heating the still for long periods of time. Ulrich is also creating a highly concentrated base, which he then blends and lengthens. For example, a 20-minute run of his equipment using 1kg of juniper berries extracts 5-10ml of essential oil – this is enough to make 1,000l of gin.

Considering some distilleries leave their stills running for hours, sometimes a day, you can start to imagine the savings Ulrich’s method creates – but you’re not even close. He’s running at an incredible two per cent of a traditional distillation’s energy usage. This figure is extraordinary, especially given the recent energy price increases that will hit a lot of distilleries hard.

To demonstrate a point: according to the UK government’s Department for Business, Energy and Industrial Strategy’s (BEIS) 2021 Green Distilleries programme, the UK would have to grow 10 million trees a year to absorb the carbon dioxide produced by the industry in total. If all distilleries adopted Ulrich’s process, that amount would be reduced to 200,000. At least, that’s what the comparison was then – the number of distilleries will have changed, but you get the point.

There are also savings to be made regarding the ability to carry out recipe development on a small and economical scale. Ulrich can easily work with various blends, perfecting his recipes, rather than having to run a distillation each time he wants to tweak one factor. Able to fine-tune each botanical, he can make minute changes, and then use his choice blends to compose a symphony.

Another innovation is the use of gas chromatography–mass spectrometry (GC-MS). It serves as a kind of facial recognition for botanicals, mapping the compounds inside them. These can then be matched with other botanicals closer to the distillery, reducing the need to ship from overseas. For example, cubeb is a fantastic botanical that grows in Indonesia and is used frequently in gin. However, Ulrich found that the petals of the humble dandelion contained the same molecules as cubeb. Dandelions are rife in his area, so he uses them instead. In building a library of GC-MS results and matching where possible, Ulrich hopes to eliminate much of the global transport needed to make his products – a large contributor to the carbon footprint of any distillery.

GC-MS can even bring botanicals back from the dead! Well, not exactly, but it can help you source the nearest equivalent. Ulrich wanted to use native Irish juniper, which is unsustainable – as he says, “the cows and sheep have eaten it all over the years.” Nevertheless, he contacted the local university, and was able to acquire a berry for testing. He then compared it to sustainable juniper growing all over the world and noted two interesting points. One was the incredible difference between varieties of juniper. “Juniper isn’t just juniper – it depends on terroir, much like grapes,” he explains. Even so, he was able to match up local Irish juniper to a variety growing in Tuscany, which was closest in terms of its molecular print.

When we imagine distillation, we imagine large copper pot stills simmering away. The romanticism of this process is, in some ways, the backbone of distillation in the UK. Methods like Ulrich’s are revolutionary in comparison, with a wealth of evidence to suggest that they are not only more efficient, but just as creative. Yet, to some, they may lack the idealistic image of the distiller beavering away in his distillery. My question is, where’s the difference? Could it not be as romantic to think of Ulrich beavering away in his lab? Distillation is chemistry. With the increasing pressure on distilleries to become more sustainable, those taking up carbon footprint calculation, efficiency and offsetting are certainly making a difference, but I would love to see more people doing what Ulrich is doing. Trendsetting may not be the typical trait of a geek, but if anyone can do it, Ulrich can. Class dismissed.

0 comments on “Symphonia Gin: A masterclass in harmonious spirits”