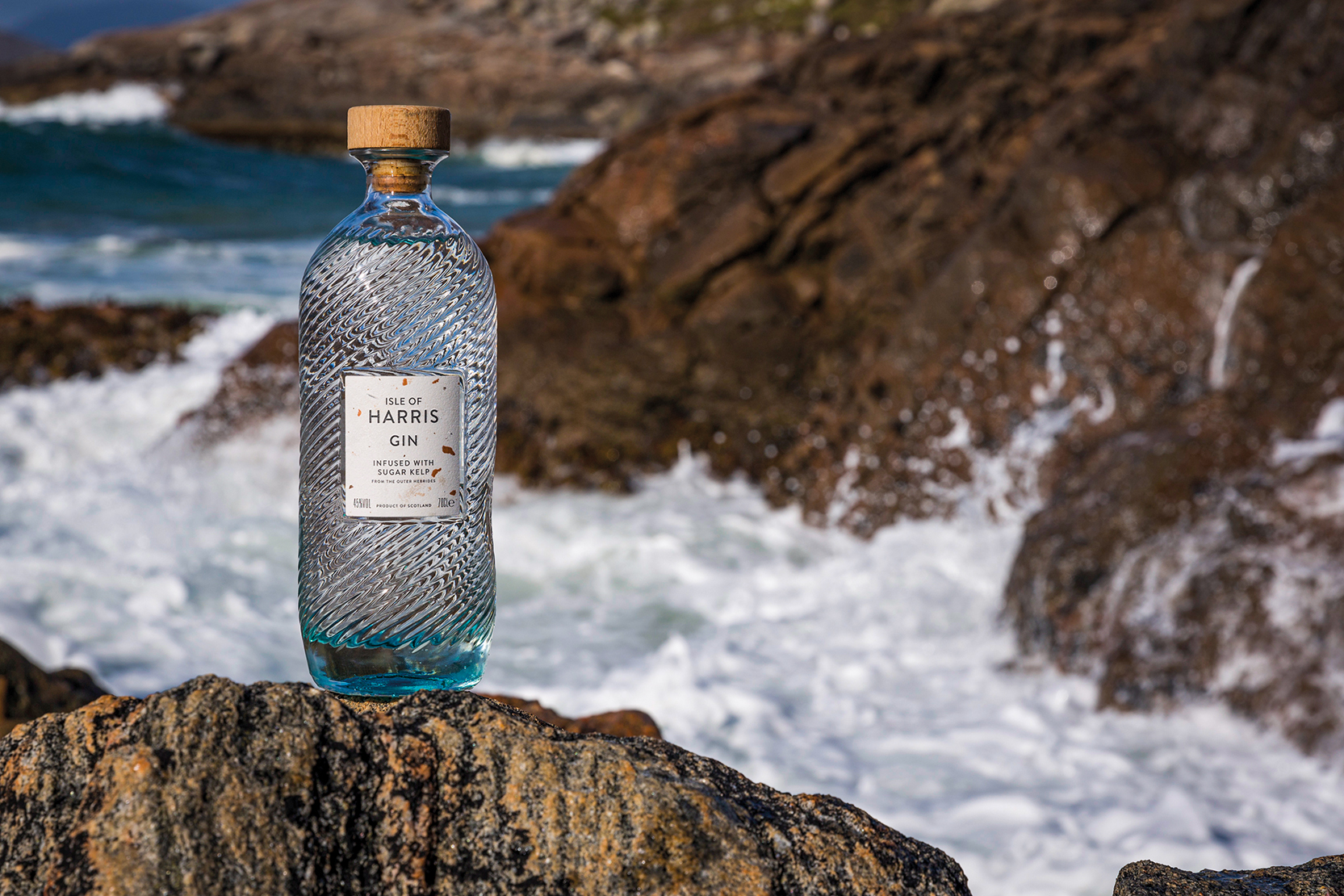 The UK is seeing a veritable boom in ‘coastal’ styles of gin, which evoke the landscape with herbaceous and floral notes of coastal plants, along with a hint of salinity to mimic the sea breeze. Although not technically a category, it is becoming more widely recognised as a style. Alongside this, we are seeing a similar evolution in ‘island gins’: these work in a similar way to coastal gins, but evoke the spirit and sense of place of their island home.

Gin’s capacity to capture terroir and evoke place is something I consider fundamental to its popularity. By creating a sense of place, gin suddenly becomes a unique and collectable item; not only that, but it also opens the door for every village, town and city to have its own style. This meant that gin drinkers no longer wanted just one or two – they wanted as many as they could get their hands on, which was game-changing for the industry.

That said, capturing the unique sense of an island isn’t as easy as it sounds. The concept itself isn’t exactly new, either. Two of my earliest experiences of island gins were around seven years ago: that of The Botanist, utilising 22 native Islay botanicals that are foraged each year; and Death’s Door on Washington Island in the US, which not only captured a sense of the place, but also became an integral part of the island itself, reviving industry and bringing prosperity to its inhabitants. The signature botanical in Death’s Door is fennel; it is more widespread now, but at the time it was unusual to find it in a gin. In fact, the botanical recipe is only fennel, juniper and coriander. One interesting thing to note is that the juniper grows on the island (many island gins may use local botanicals, but still have to source their juniper from elsewhere – Isle of Raasay Gin is another exception).

A more modern equivalent of Death’s Door would be Isle of Harris Gin: a product built on the foundation of creating industry on the island. It incorporates locally harvested sugar kelp to evoke that sense of the coast and found popularity very early on due to its bottle design, which revolutionised gin bottle design as we know it.

As Death’s Door may suggest, the terroir of the coastline is a subjective thing. Whereas us Brits will likely think of seaweed, gorse flowers, rock samphire and the like, Mediterranean islands will likely feature more citrus and herbs. “What’s this got to do with the coast?”, you may ask – and that’s an interesting point. An island has a lot more to offer than the sea which surrounds it. Mahon by Xoriguer Distillery on Menorca, for instance, is one of the only gins in the world to have a geographical indication (GI), meaning it can only be made there. The story behind Mahon tells of ‘La Isla De Menorca’, a regular port stop for British soldiers who liked a drink while they were there. The locals capitalised on this by making their own gin from a local grape (wine) base, local juniper and water. Although I’m sure we can argue this is not a unique-tasting product, its production and name is woven into the very fabric of the island.

So, in this example, Mahon is absolutely an island gin, despite the profile missing the salinity that often comes with coastal character. I should add, though, that even coastal gins can be coastal without this. Hernö High Coast Terroir Gin is an ode to the beautiful landscape near the Swedish distillery. However, it’s the forested area around its coastal location that truly inspires this gin. Trumpet chanterelle adds spice to the profile along with sorrel, which is herbaceous with a tangy citrus flavour. These bring the forest accent to Hernö’s classic botanicals of meadowsweet, lingonberries and juniper. This gin leans much more into a terra terroir, rather than evoking the idea of land meeting sea.

There are instances of gins behind made on an island where the focus of the gin is very much coastal. Barra Atlantic Gin, made on the Isle of Barra, on the far western edge of Scotland, uses carrageen seaweed as its signature botanical. It is not exclusive to the island – it is actually found all around the coasts of Europe – but Barra Atlantic is one of the first gins to utilise it, not just for its flavour, but also for the texture it creates.

Carrageen seaweed is already known in the culinary world. When heated, it exudes a gelatinous substance that is often used as a gelatine replacement and a thickener. Tasting it neat on the palate, there is a lush round mouthfeel that is peppered with beautiful marine qualities. However, there is a deeper reason for using this botanical.

“The reason behind carrageen seaweed being chosen as our key botanical in our Barra Atlantic Gin stems from a sentimental value to our co-founder and managing director, Michael Morrison,” explains Debbie MacMillan from Isle of Barra. “Throughout Michael’s childhood, his mother would make carrageen pudding, which formed a similarity to panna cotta – as carrageen seaweed is a natural gelatine, it was the perfect ingredient to use. Rich in antioxidants, nutrients and minerals, it was sought to be a key ingredient for use in food when unwell or poorly. Therefore, carrageen seaweed has both sentimental and local value to us.”

This sentimentality is exactly the sort of thing I dig with gin: the art of creating a spirit to share an important experience, a moment, or a place.

In some instances, the island is so much of an inspiration that a distillery may produce several gins inspired by the area. Step in Simon Tardivel of Isle of Bute. Simon gained both distilling and brewing experience around the world before settling on Bute to stay. The distillery kindly sent me some samples of its Gorse, Heather and Oyster Gins, which focus on a particular part of what the island has to offer.

Simon realised that there are similar flavour molecules in juniper berries to oysters. With a test batch, he found that the shells created a flavour that has a surprisingly bright and almost floral complexity.

He says, “It might sound a bit strange, but it’s a really nice savoury gin – perfect in a dirty, wet martini. One of the really nice things about it is watching people try it for the first time. A lot of people expect to hate it, but only very rarely do we get someone who doesn’t like it.”

Simon adds that island gins generally aren’t made exclusively from botanicals from that island. “I don’t think it’s entirely in the spirit of gin to exclusively use botanicals from one part of the world – it’s a drink born out of globalism and trade and spices from many different places – but that doesn’t mean you can’t make gin that is inspired by one small island. A lot of the recipes are built around one single ingredient from Bute, for example gorse or heather. It’s difficult to find oysters that live on an island, seeing as how they live in the sea, but they do come from Loch Fyne, which is just up the coast. Then, we support that main ingredient with more classic botanicals to create a gin that is still noticeably a gin, but one that gets its identity from the island.”

He makes a good point, but I would add that this is often the case with a gin that is built on any idea of place, be it an island, forest or mountain. However, I wonder how much drinkers contemplate this. It is often the case that globally sourced ingredients make up the base, and then signature botanicals are added and that twists those ingredients just enough for the entire liquid to appear to be from the place – and really, that is where the liquid is born. So, what we can conclude is that just one botanical from a place can infuse a liquid with that place. And, just because an island is surrounded by the sea, it doesn’t mean an island gin will have a coastal quality – it may take inspiration from one of many things on that island, and from many moments in time. Island gins are no simple matter, but through all the variations and differences, there is an invisible thread that connects them, as it does all gins: inspiration.

0 comments on “How island gins get their unique flavours”