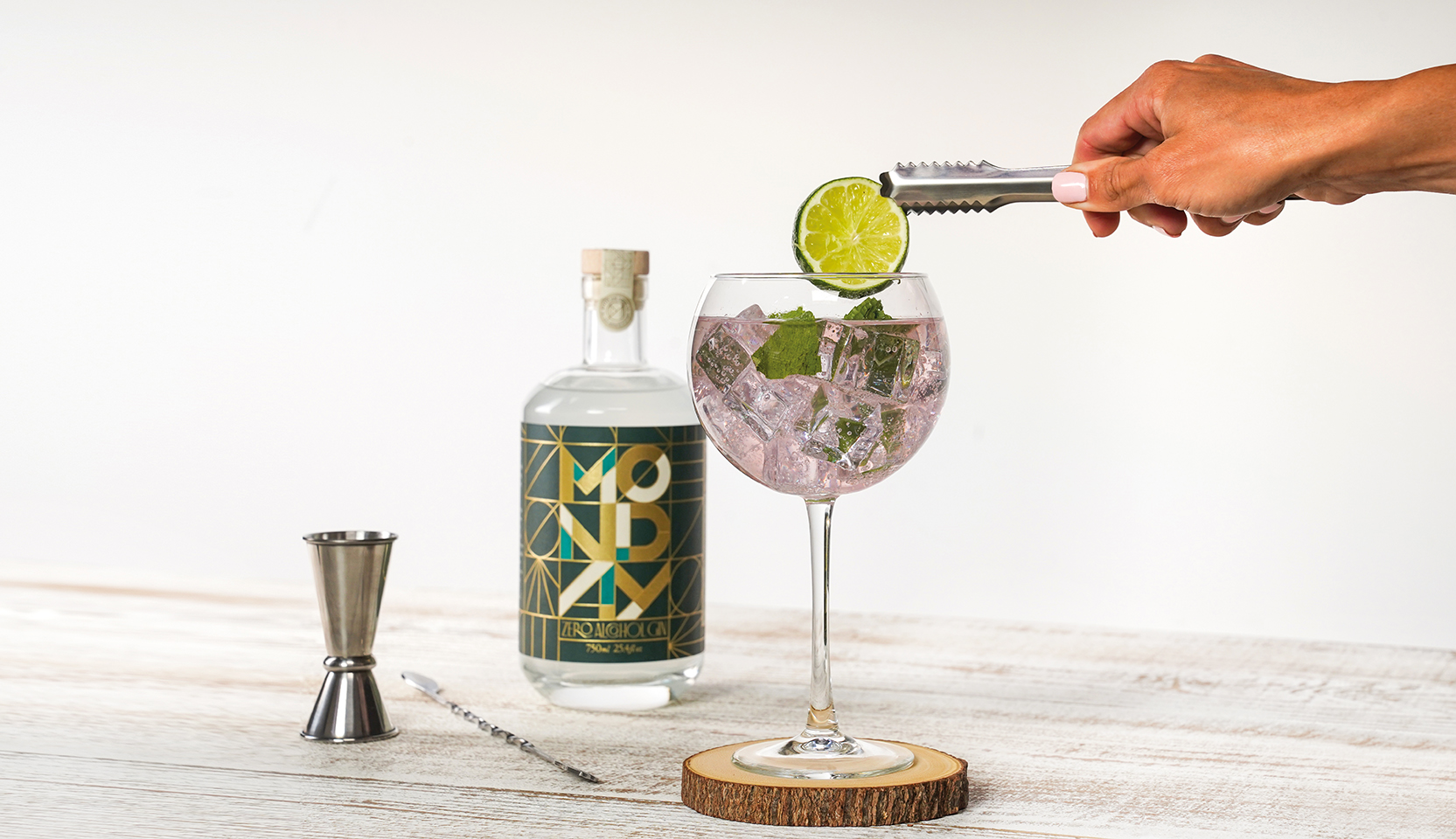 With the alcohol-free spirits market booming, we take a look at the production and popularity of gin alternatives

It’s never been a better time to be sober. While the past decade has seen an explosion of microdistilleries, expanding the scope and variety of spirits to be enjoyed, there’s also been another, equally significant shift in the drinks industry – towards alcohol-free alternatives to the classic gin.

Technically speaking, an alcohol-free gin isn’t really gin. Across Europe, the term requires 37.5% ABV, while drinkers in the US expect 40% ABV for the official ‘gin’ label.

All the companies we spoke with were careful to draw that distinction, calling their alternative products “aperitifs” or “botanicals”. According to Lyre’s CEO Mark Livings, the company’s alcohol-free portfolio “pays homage to the world’s best-loved alcoholic spirits” – in some ways a tribute, rather than a direct competitor.

But it’s clear that more and more consumers are looking to scratch the itch with something akin to gin, and companies are starting to take notice.

A flurry of non-alcoholic drink brands has emerged in the past few years – both Pentire and Lyre’s appeared in 2019, with the latter launching 13 non-alcoholic spirits from the get-go – while traditional distillers are also getting in on the action. 2021 saw Beefeater announce a lower-strength 20% ABV product, while Tanqueray launched its 0.0 line. This alcohol-free spirit is made by individually distilling the botanicals used in Tanqueray London Dry Gin and blending them together, retaining the same flavours while sidestepping the processes that would turn the substance alcoholic. But why the sudden surge in interest?

Contrary to popular belief, we don’t all turn to drink when the going gets tough.

With the onset of the Covid-19 pandemic, an exponential rise in spirits sales in the US came to an unsurprising halt, with pubs and bars closed for months on end and finding far fewer customers when they were able to reopen.

For low- or no-alcohol alternatives, though, it’s a very different story, with the UK’s International Wines and Spirits Record (IWSR) forecasting 31 per cent growth for the sector between 2020 and 2024. Mark Livings says, “There’s no doubt that the pandemic expedited the trend… Lockdown forced a lot of people to think about how much alcohol they consume regularly.”

Everleaf founder Paul Mathew, a conservation biologist turned bartender, is bullish about the growth of this nascent ‘non-alc’ market, saying, “Pandemic restrictions helped the growth in variety, both by driving an increase in wellness trends and demand for non-alcohol ‘rewards’ to celebrate the end of the home-working/home-schooling day.”

Mathew also argues that shuttered high streets actually helped smaller brands that were able to reach their audience through e-commerce and social media rather than by making the sizeable investment required to get their drinks on supermarket shelves.

But alcohol-free alternatives were gaining ground even before that. Analysts at Deloitte have reported that millennials drink 20 per cent less than their parents, while the Society of Independent Brewers found that those aged 18–24 were almost twice as likely to say they didn’t drink as those aged 35-44, which the Society puts down to an increased focus on “physical and mental health”.

English company Pentire leans hard into this trend, going so far as to market itself as a “health and wellness product”. A spokesperson aligns its alcohol-free botanicals with a “love for the outdoors [and] active living”, supporting a lifestyle that keeps consumption in moderation and limits the amount that a drink might inhibit physical activity – surfing, camping, cycling – either through a tipsy haze or a cruel morning-after hangover.

It’s a similar story at Californian distillery Drink Monday, which was named after its founders’ desire to make a drink they could enjoy on a Sunday evening without rendering the start of the working week unbearable. “Non-alcoholic spirits are for anyone looking for complex adult flavours in their glass without the alcohol,” says co-founder Chris Boyd, “whether it’s folks that are completely sober, taking a break, or simply don’t want alcohol in that particular moment.”

The curious thing about alcohol-free spirits is that they’re not really spirits at all. You will find some products that merely reduce the end total of alcohol – like Beefeater Light – but alcohol-free drinks are another consideration altogether.

“We call our drinks spirits because we’re using distillation just like you’d do with gin or vodka, but we’re distilling fresh, delicious plants,” a spokesperson for Pentire says. “After harvesting our plants from the surrounding headlands of North Cornwall, they are distilled carefully and naturally.”

So the end result won’t be quite the same as the spirits you’re used to, but you’ll hopefully find the alternative enticing in its own way.

Distilling alcohol-free alternatives can come with problems, though. “Alcohol is a fantastic solvent and preservative,” says Paul Mathew at Everleaf, “so I’d say the biggest challenges are making the flavour intense enough, and stable enough to last. Unlike alcohol, we need best-before dates and a consume-within period after opening – to ensure [our drinks are] safe, but mainly so they taste as delicious as we want them to. The intensity part is particularly challenging, so our botanicals are extracted in whatever way gets the most flavour [maceration, steam distillation, etc].

“Then it’s a case of blending those extracts to the desired flavour profile – to me, something that closely resembles developing a new cocktail recipe, but is probably more akin to perfumery in technique, just with flavour as well as aroma. The other part is texture: I spent a lot of the development stage of Everleaf working on the texture of the liquid, so that it carries flavour well, and gives a satisfying mouthfeel and weight.”

So, just how close are these alternatives and aperitifs to the real thing?

If you’re drinking a non-alcoholic spirit neat, not very: it’s hard to recreate the throat burn you’d find with alcohol. So, the purpose of tonic here has less to do with diluting a strong substance and more to do with replicating the usual mixing procedures for making cocktails.

When you’ve mixed a Pentire or Everleaf botanical with some appropriate tonic and stuck in a wedge of lime and a couple of ice cubes, it really can be hard to tell the difference – most of the constituent parts of the G&T are still here, after all, and there’s likely a mild placebo effect.

But the underlying ‘spirit’ is still crucial to formulating your ideal drink. Lyre’s Pink London Spirit uses a glucose syrup with hibiscus to lend a flavourful thickness to the liquid – almost like a sweet soda pop when mixed with tonic, and likely close to what newcomers will expect from a mocktail – while its Dry London Spirit is a close enough approximation to the real thing, once you’ve got ice and tonic involved.

Everleaf’s botanicals could even pass as undiluted cordials; its Marine offering comprises a delicate blend of fair-trade cane sugar, sea salt and sea buckthorn, with a briny tang that isn’t far off from alcoholic spirits based on oceanic botanicals. It’s a similar story for Pentire’s Seaward, which combines flavours of wild seaweed and pink grapefruit to create an enticingly bitter non-alc concoction.

Most impressively, Everleaf’s distillers manage to recreate something of the weight and thickness of a real spirit; whereas some competitors can end up tasting like flavoured water, Everleaf captures something of the texture of gin on the tongue, along with a crucial edge of juniper to the flavour.

As we’re told time and again by these sober distillers, this is just the beginning. At the moment, alcohol-free spirits only take up a small fraction of total spirits sales – far less than the market share enjoyed by non-alcoholic beer – and drink makers are still figuring out the path ahead.

“Making something that has never existed before is challenging,” says Boyd. “We’re pioneers of a new beverage category, similar to how craft beer started 20 years ago. Though we believe we’ve created some excellent spirits, we’re in the very early stages of our journey – learning, experimenting, and innovating.”