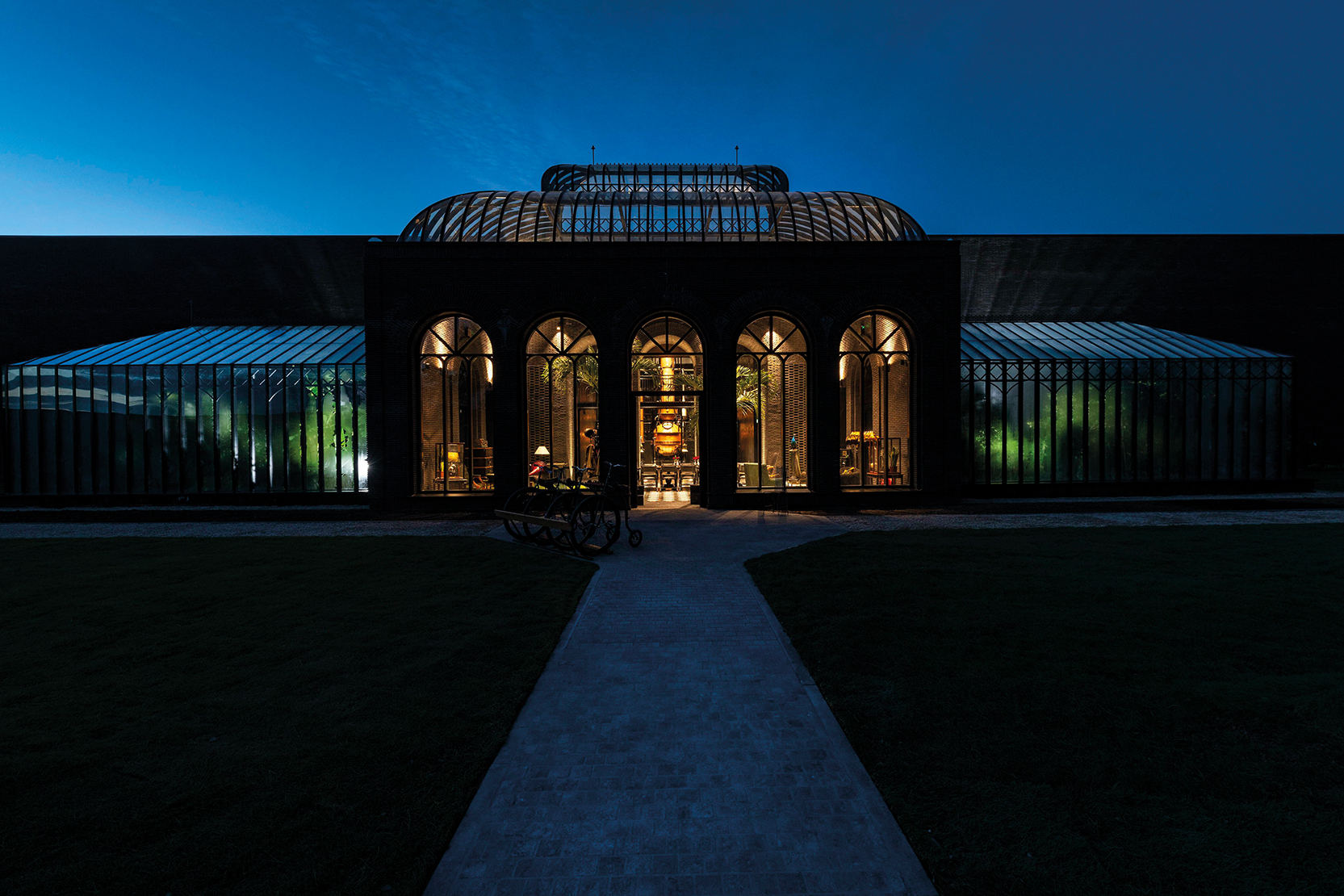 Inside the Hendrick’s Gin Palace, wondrous creative and scientific experiments are taking place

It’s a wet and blustery day in Girvan, southwest Scotland, with the UK caught between fierce Atlantic storms, but our group has found a mercifully dry half hour to visit the beach. I’m walking with Lesley Gracie, Hendrick’s master distiller, and her elderly but sprightly golden retriever, Jock. She’s telling me the story of how she came to be one of the most well-respected people in gin distilling (although she’d never phrase it like that): after starting a career in pharmaceuticals, she moved to Scotland with her husband and accepted a job in quality control at William Grant & Sons. A decade later, in 1999, she was approached by the company’s owner, Charlie Gordon, to make a gin that stood out from others on the market. The rest, as they say, is history.

“But I wouldn’t do anything differently now,” Lesley says, smiling contentedly.

There is a reason we have come to this beach near the imposing Trump Turnberry Hotel: it provided the inspiration for the latest limited-edition Hendrick’s gin, Neptunia. Launched on 1 March, it is an homage to the sensations and flavours of the Scottish coastline. The full botanical recipe is a closely guarded secret, but Lesley and the Hendrick’s team say the gin is less about the individual parts, and more about the impression created by their sum.

This ethos has underpinned all the distillery’s limited-edition releases since its first, Midsummer Solstice, was unveiled in 2018. The fact that it took almost two decades from launch for Hendrick’s to release an expression of any kind speaks volumes about the careful process by which Lesley designs her recipes.

Although she trained as a chemist before joining William Grant & Sons, Lesley’s passion is botany. Her life is filled with flora. She estimates she has around 70 orchids in her home garden, as well as a cornucopia of other plants. She has two hothouses at the distillery from which to plunder plants for distilling experimentation, from bergamot and cacao to Scotland’s first bananas. The distillery building itself is surrounded by a lawn which, in springtime, is carpeted with fragrant wildflowers.

Ironically, this distillery, where such beautiful things are now created, used to be part of a bomb factory. Acquired by William Grant & Sons in the early 1960s, the site was transformed into a dedicated grain whisky production facility, which opened in 1963. (The company was offered a preferential rate on water usage on the site – an attractive offer for a distiller of its size.) It wasn’t long before Charlie Gordon planted the first seeds of Hendrick’s with the purchase of two stills – a 1,000-litre Bennett built in 1860 and a 1,000-litre Carter-Head from 1948 – at a 1966 auction of goods from the former Taplow distillery in London.

Lesley explains that the combination of these two stills is integral to the character of Hendrick’s Gin. While dried botanicals are placed directly into the Bennett and steeped for 14 hours before distillation, the Carter-Head has a vapour infusion basket to suspend botanicals above the still neck. The result is two concentrated distillates that impart different flavour profiles from the same 11 botanicals: juniper, coriander, angelica, orris root, lemon and orange peels, cubeb, caraway, chamomile, yarrow and elderflower. Lesley says, “Charlie wanted a lot of depth in his gin, to stand out from the lighter stuff that was around at the time.”

But what about the rose and cucumber, the very core of Hendrick’s’ quintessentially British character? “Charlie always said that if we were going to do something, we were going to do it right,” Lesley explains, “so we decided to add the cucumber and rose after distillation, as concentrated essences. That means Hendrick’s is not a London dry gin, it’s a distilled gin.”

For the first 15 years of its life, every drop of Hendrick’s came off the Bennett and Carter-Head stills. In 2015, a third still (a Carrick made identical to the Bennett) was installed amid increasing demand. But soon after, with the gin’s popularity skyrocketing and its building at capacity, finding more room became a necessity.

William Grant & Sons relinquished two of its whisky warehouses for the expansion. These were demolished, and in their place was built not just a distllery, but a shrine to the art of making gin: the Hendrick’s Gin Palace. It is an “invitation-only” venue, hosting bartenders, drinks industry professionals and other special guests. However, it has not seen many visitors since opening in late 2018, thanks to closures and the strict social distancing rules adopted in Scotland during the pandemic.

Architecturally, the Gin Palace is influenced by the spectacular orangery at Culzean Castle, just up the coast. Inside, it is laden with the trademark Victoriana of Hendrick’s: intricate metal detailing, towering brick archways and potted palms in the atrium; a sumptuous, warmly lit bar with large tasselled lampshades, dark leather furniture and bookshelves lined with memorabilia and ornaments; and a lecture theatre with wooden benches and a blackboard, which is used for guided tastings.

The first stop on our tour is the still rooms, of which there are three. The first, visible from the atrium through dramatic floor-to-ceiling windows, contains the original Bennett and Carter-Head stills, plus the first Carrick. The second contains three working stills – carbon copies of the original trio, rigorously tested to ensure consistency – with space for two more sets. The third room is currently being used for botanical storage, but has been built to accommodate another three sets of stills. In total, that’s six stills operational so far, with space for a further 15. Maximum producing capacity is seven million nine-litre cases per year – seven times that of the previous building.

Next, we move on to the greenhouses which flank the atrium. One maintains a tropical climate, warm and humid, and the other a drier Mediterranean climate. As we meander through each, Lesley reaches out to touch the plants. It’s as though she’s examining them for something that mere mortals without her botanical understanding cannot see. Excitement breaks through her quiet concentration for a moment in the Mediterranean greenhouse when she shows us two small pots in which she planted seeds from the palm trees in the atrium – they have started to sprout.

From here, Lesley takes us to her lab – “where she goes to play”. There is a Flavour Cabinet packed with bottles of distillates, experimental gins and dried botanicals, as well as the Cabinet of Curiosities, which holds a bottle of every Hendrick’s release, including limited editions such as cult classic Kanaracuni: Hendrick’s spirit infused with a distillate of scorpion tail (the plant, not the arachnid). The room is lined with small cabinets for lab equipment, including empty sample bottles and beakers of every conceivable shape.

While distillers showing their stills to visitors is becoming more common, spaces such as this, which demonstrate further processes in distillation and spirit blending, are rarer. The lab adjoins the lecture theatre, lending the space an academic feel – you’re here to listen and learn.

Seated in the lecture theatre, we are guided through an unusual tasting (coming from Hendrick’s, would it be any other kind?). It includes distillates from the Bennett and Carter-Head stills respectively; a combination of the two; the concentrated cucumber and rose essences (strictly for smelling, not tasting); and, finally, finished Hendrick’s Gin. In this part of the Hendrick’s development process, each separate element does matter, and – as you would expect from a distiller turning out around 18 million litres of spirit a year – precision in their execution and blending is paramount.

But in the explanation of the Hendrick’s range that follows, Lesley emphasises that each gin is more about the overall impression it creates than the constituent botanicals.

The first Hendrick’s limited edition, Midsummer Solstice, happened almost by accident. It was designed to be served at a colleague’s wedding, and Lesley based the recipe on the wedding bouquets. What started as six bottles of gin became a small-batch release, then an international success.

It followed the launch of Hendrick’s Orbium, the brand’s first new expression, in 2017. This specialist on-premise gin is infused with quinine and wormwood for a delightfully bitter, woody character.

The next limited edition was Amazonia, inspired by Lesley’s travels in South America in 2013 (fittingly, it was a travel-retail exclusive). While Lesley did distil with native botanicals during her trip, the gin is not made with indigenous Amazonian plants (that would hardly be sustainable or environmentally friendly). Instead, it evokes her time spent there: it’s vibrant and juicy, with pineapple, lime and peppery spice.

Lesley devised 2020 release Lunar sitting in her garden one warm evening and noting subtle changes in the floral aromas around her as day shifted to night. While the florals in Midsummer Solstice are bright, sweet and crisp, Lunar is dark, dusky, bold and spicy.

Then came the marine-inspired Neptunia, which balances salinity, creaminess and freshness with a sharp lime finish (a nod to an old British naval cure for scurvy).

Hendrick’s Gin Palace ambassador Tim Pryde explains the brand’s development process as he pours out samples at the bar. “For us, it’s nice to take the Hendrick’s steampunk Victoriana brand and see how we can skew that for the different expressions. For example, for the Neptunia, we were playing on the coastal theme… With each expression, it is more about building the story,” he says.

“Until very recently, we only had Hendrick’s, and now we have released so many more expressions. That is a great opportunity for Lesley and her creativity, and that is why we wanted the extra capacity – so that she could continue to explore and be creative and innovative.”

It would be easy to dismiss Hendrick’s’ quirky personality as a marketing gimmick. But once you get under the distillery’s skin, you release that creating an immersive experience is integral to its approach to flavour development. Both the brand and its range of spirits have been built around capturing feelings – the concentrated essence of experiences, if you will – and bottling them. I will be holding my own bottled Hendrick’s experience close to my heart for some time to come.

0 comments on “Hendrick’s Gin: Step inside the Gin Palace”