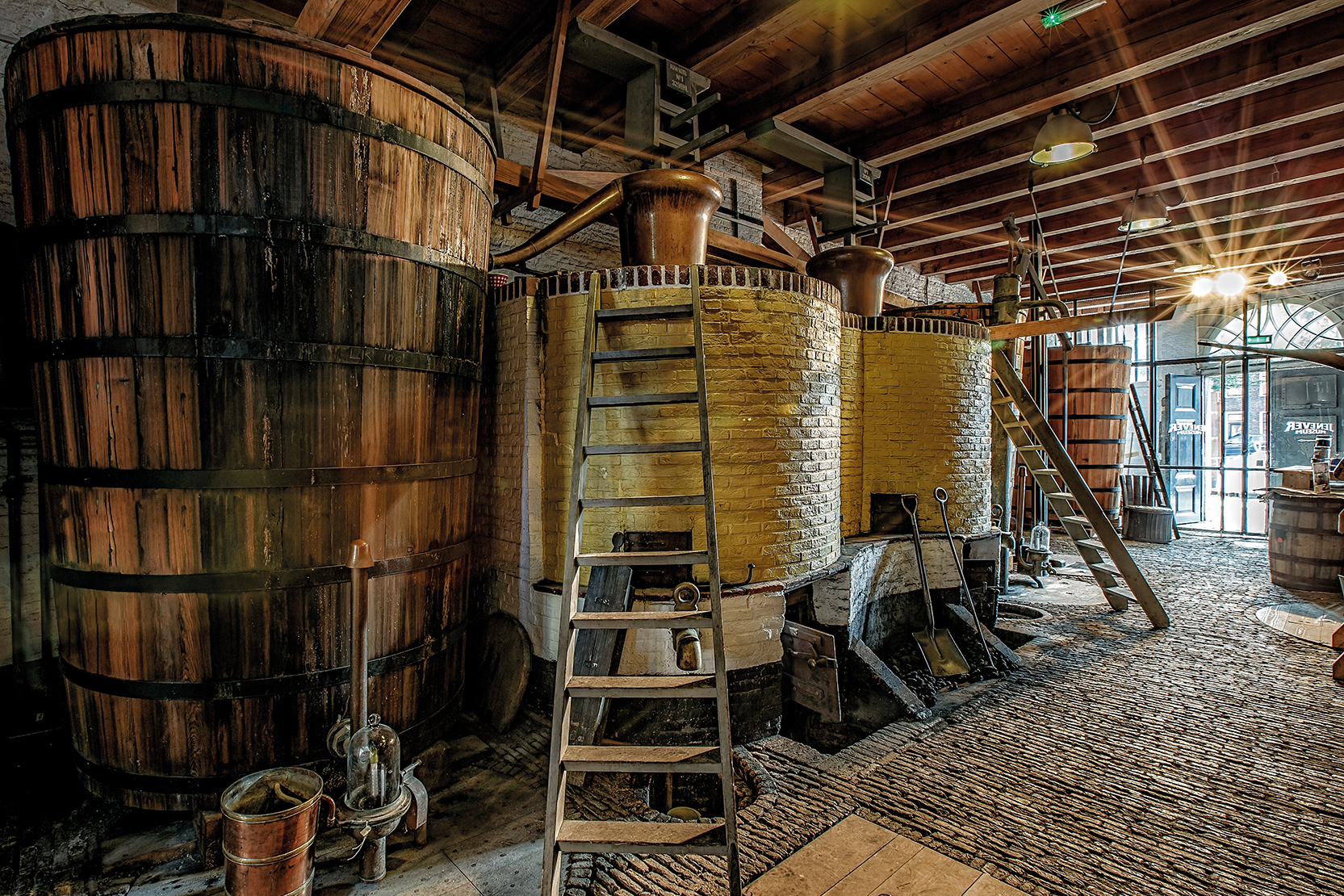 Referred to as ‘Holland gin’ by bartenders in the 19th century, Dutch genever was once widely known by an even more specific regional name: Schiedam. This small city near Rotterdam was home to more than 360 registered distilleries at its height and produced much of the genever consumed the world over. As a result, the name Schiedam became synonymous with quality genever, in the same way that Cognac and Scotch are for brandy and whisky.

While it is far from as influential on the global drinks stage as it once was, Schiedam remains home to many genever brands, and can still lay claim to the title of genever capital of the world. But today, just two distilleries produce genever that carries the quality seal of the City of Schiedam, meaning they uphold regulations for genuine Schiedam genever from 120 years ago. De Gekroonde Brandersketel, which is part of the Dutch Jenevermuseum, and Herman Jansen’s distillery De Tweelingh produce the only three qualifying brands: Old Schiedam is made at the former, Notaris and Old Duff Genever at the latter. These distilleries’ production methods are as traditional as they come. In a way, their products might just be the ultimate craft genever. “When visitors see me pick up a coal shovel to fire our pot stills, it makes their eyes bulge,” says Rutger Vismans, head distiller of De Gekroonde Brandersketel.

The regulations for genuine Schiedam genever are surprisingly succinct and don’t offer very detailed instructions on production methods. However, they allow some insight into certain key elements of the distillation of traditional maltwine (moutwijn), the grain distillate that serves as the base of any genever. First and foremost, Schiedam maltwine should be grain-based and distilled three times, to a strength of 43-48% ABV. Distillers are also prohibited from using anything other than batch distillation in pot stills. This hints at the maltwine distillers’ disapproval of neutral spirit from column stills and is a sign of the turmoil during which these regulations came to be.

As had long been tradition, in the early 20th century, the Schiedam genever industry was divided into two groups. Maltwine distillers produced spirit for botanical distillers. After adding juniper berries and other botanicals, these botanical distillers sold their genevers to consumers. The two had happily partnered for centuries, but the arrival of the column still in the 19th century threw all kinds of spanners in the works. Lobbied for by the maltwine distillers, the 1902 ordinance to protect the authenticity of Schiedam genevers may well have been the final nail in the coffin of this age-old partnership. At the very least, it signified a definitive shift that had been brewing for years.

Protectionism, rising import duties and other new trade regulations brought an end to the final boom period for Schiedam genever, which lasted from 1850 to 1880. In the years after, when botanical distillers were forced to use cheaper raw materials to cut costs, they chose to dilute the maltwine with neutral spirit made from molasses – or leave maltwine out entirely. The traditional maltwine distillers felt left out in the cold, but the botanical distillers were vindicated by domestic consumers, who seemed to prefer the softer, more neutral characteristics over the rich Schiedam maltwine genever. “Customer was king,” says Vismans. “They wanted an easy-going product – not too much character or flavour, and not too expensive. That meant using neutral spirit.” In time, this new style became known as jonge jenever, ‘young genever’, and went on to dominate the genever market during the 20th century.

The Schiedam maltwine distillers ultimately couldn’t stem the tide, at least in part because they weren’t able to present a united front. Attempts to come up with price agreements or to jointly regulate maltwine production did not pan out. Mudslinging in the local newspaper didn’t create any goodwill either. “Schiedam is ill,” commented Herman Jansen in 1900. He tried to appeal to fellow maltwine distillers, and was hurt by the lack of cooperation between his colleagues. Against all odds and despite plenty of opponents, the regulations were approved by the City of Schiedam just two years later, but they were never mandatory. It turned out to be a Pyrrhic victory for the maltwine distillers; only six signed up for the quality seal, which died a slow death when Wittkampf, by then the lone producer of genuine Schiedam maltwine, stopped production in 1967.

At first glance, the situation might not seem to have improved all that much in the 50-plus years since. There still are only two distilleries whose products carry the quality seal of the City of Schiedam. One of them is part of a museum. The other is very clear about the commercial appeal of genuine Schiedam genever. “We don’t make much off of Notaris Jenever,” admits Ad van der Lee, master distiller at Herman Jansen. But appearances can be deceiving; Notaris has been a standard-bearer for traditional genever since it was revived by descendants of Herman Jansen in 1987. It was a daring enterprise during an era when pretty much all genever was produced with neutral spirit, but Notaris has helped make maltwine part of the conversation again. And today, together with Old Schiedam and Old Duff Genever, it is keeping the heritage of genuine Schiedam genever alive.

These 100 per cent maltwine genevers lean heavily on characteristics provided by the grains. Though not precisely laid out in the 1902 ordinance, it is tradition for Schiedam maltwine to be fermented and distilled ‘on the grain’. Grains usually include rye, malted barley and, in the case of Notaris, corn.

“The cereal is processed in its entirety, which has a big impact on flavour,” explains Van der Lee. “We do not filter our wort, so all the proteins and fatty acids from the grain end up in the wash and our pot still. It complicates our distillation process, which might well be the reason [for] historically…distilling the maltwine three times.”

The botanicals in genuine Schiedam genever are mostly used in a supporting capacity, as has always been the case with genever. Van der Lee references recipes from before the Second World War, which barely included any botanicals, but just enough to add a little more depth and interest. Notaris is enhanced by eight botanicals, but in very limited quantities. It would be barely noticeable if one of them were left out. “But together the botanicals are greater than the sum of their parts,” says Van der Lee. “Leave all botanicals out and you will have a very different product.”

Old Schiedam is even more spartan in its use of botanicals. Vismans explains that one of its products has none – it’s a just a straight-up maltwine and can’t even legally be called genever. The other products are augmented only by adding juniper berries. However, Old Schiedam also benefits from cask maturation. “Always at least three years in bourbon casks,” says Vismans. “Centuries ago, casks were also used, but for transport, not for exactly this purpose. In old photographs the docks of Schiedam were loaded with them.”

While casks are used, they were not a major part of the original vision for Notaris. Its founders believed genever shouldn’t resemble whisky, so they made sure to limit oak influence. One Notaris expression remains unaged even to this day. The same goes for both Old Duff Genevers. “The consumer seems to enjoy our aged genevers,” says Van der Lee. “I’m personally mostly interested in blends of different vintages and cask types. Age isn’t as important. For example, our Bartender’s Choice is a mixture of aged and unaged genever, and is great for cocktails.”

A genuine Schiedam genever is sometimes described as the spirit equivalent of a wholegrain bread. There’s some freshness from botanicals, but their influence is nowhere near as prevalent as it is in gin. So, despite the historical bond between the two spirits, it’s not a given that gin drinkers will be drawn towards this most traditional of styles. “Botanicals, oak maturation, maltwine character,” says Van der Lee. “There are so many variables that influence the flavour.” But if a gin drinker wants to go back to basics, genever is it, says Vismans. “To enjoy gin, you need a good tonic,” he says. “For genever, you only need a proper glass.”