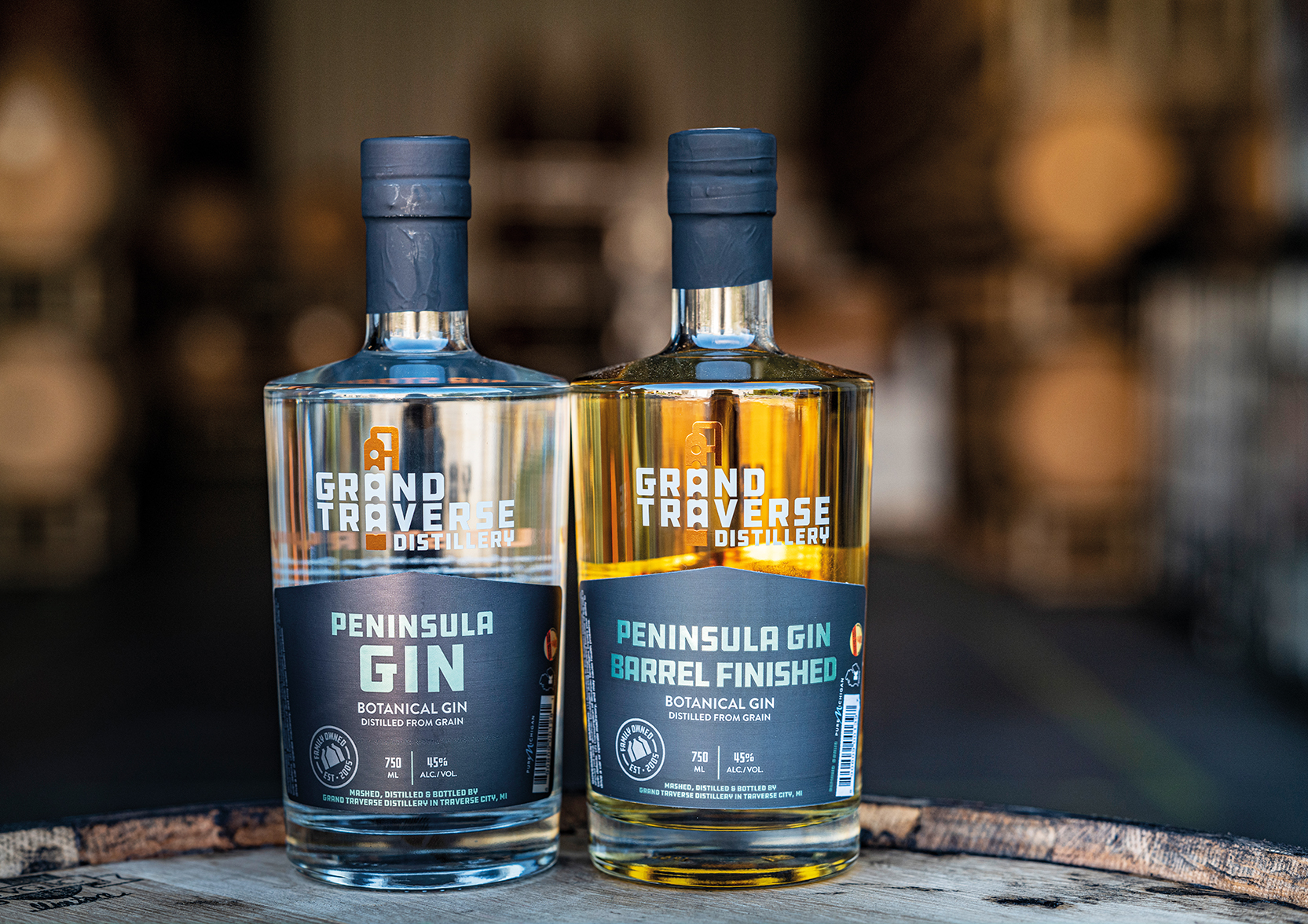 As big as an ocean, or so it seems from its shores, Lake Michigan is the fifth largest lake in the world. With breaking waves on windy days and icebergs in winter storms, the lake changes the climate for hundreds of miles, and hosts dozens of ecosystems.

Four states touch its shores: Illinois, Indiana, Michigan and Wisconsin. Its banks claim to be the former chopping grounds of the American folk hero Paul Bunyan, a lumberjack whose likeness graces highway signs, statues and kitschy postcards from the area. The lake’s shores are also home to some pioneer craft distillers: people who founded the first legal distillery since Prohibition in – name the place.

Two major cities, Chicago and Milwaukee (neither in Michigan), sit on Lake Michigan’s shores. The greater Chicago area, cupping the southwest corner of the lake, is home to about two dozen gin makers, from North Shore Distillery in Lake Bluff to Thornton Distilling Co. in the southeast corner.

An early producer of barrel gins, FEW Spirits, set up shop in Evanston, Illinois, home of the Woman’s Christian Temperance Union and famous abolitionist Frances E. Willard, from whose initials the distillery gets its name.

FEW Spirits Barrel Rested Gin threads the fine line between gin and whiskey, equally at home in a Negroni and a Boulevardier. To get the desired nuance, FEW blends three gins aged separately in different types of casks: ex-bourbon, ex-rye, and new oak.

FEW Spirits founder Paul Hletko said, “We definitely try to hit that exact midpoint between gin and whiskey – heavily oaked, but still a gin at heart, rather than a botanical whiskey. Over time, I think we have probably veered a little closer to the botanical whiskey, but there’s obviously no real definition in this category.”

FEW was one of the early American craft gins to make it to the UK, which inspired its best-selling Breakfast Gin, featuring an English bergamot-infused Earl Grey tea along with citrus zest and, of course, juniper.

Between Chicago and Michigan, you could spend an entire summer exploring distilleries and not run out of fun. This includes a small corner of Indiana, where the town of Munster is home to Three Floyds Distilling Company, makers of Wight VVitch Midwestern Gin and Oude Boatface Not Normal London Dry Gin.

Journeyman’s Bilberry Black Hearts Gin is named for the signature botanical that makes it unique. Journeyman co-founder Bill Welter chose the bilberry not as his namesake but for its flavour, which reminded him of the two years he spent in Scotland catching the distilling bug.

Welter said author Thomas Hardy “described the bilberry as having the appearance of a small black heart” in the 1878 novel Return of the Native. He became fond of the description as well as the flavour, using it to bring a fruity component to this American-style gin, which also includes bitter orange and lemon peel, coriander, anise, orris root, angelica root and cinnamon.

Journeyman was founded in 2010 inside an 1880s building that formerly housed the Featherbone Corset and Buggy-Whip Factory. Far from being just the story of a building’s renovation, Journeyman’s origin is part of the revitalisation of the sleepy 1,000-resident town of Three Oaks. Arriving in the wake of an art house movie theatre and a live theatre, the distillery made for a revival.

“The revitalisation of the town was led by those two projects,” Welter said, referring to the theatres. “Journeyman coming to town supported that idea. We have become something over time. We’ve become part of the burgeoning food and beverage community in southwest Michigan.”

The distillery opened its tasting room in 2011, and was followed in 2015 by Staymaker, a 165-seat full-service restaurant which immediately became a popular daytrip from Chicago. The village-like settlement is also home to gift shops, art boutiques, a couple of breakfast joints, a couple of dive bars, and a 110-year-old butcher shop.

Upcoast an hour and a half from Journeyman is Holland, home of Hope College, a Christian university. Brett VanderKamp founded New Holland Brewing just off the dry campus in 1997, immediately becoming popular. In 2005, New Holland added a still to the brewpub, and the company has continued to expand, opening a production brewery, cocktail bars, tasting rooms, a bottle shop, and larger distilleries. In addition to its brewpubs in Grand Rapids and Holland, and tasting rooms in Saugatuck and South Haven, New Holland plans to open a location in an as-yet undisclosed city in 2022.

To satisfy a Michigan law stipulating that every drop of beverage alcohol in a cocktail served by a distillery pub must be made in house, New Holland planned early to produce a full line of spirits – rum, vodka, gin, whiskey and liqueurs – to fill any cocktail need. New Holland releases four gins under its Knickerbocker brand: American Gin, Barrel-Aged Gin, Blueberry Gin and Grapefruit Gin. With a beer canning line already in place, New Holland also cans about a dozen cocktails, two of which are gin-based: Blueberry Gin Lemonade and Holland Mule.

Driving across Holland leads to Coppercraft Distillery, which makes its eponymous gin with 13 botanicals, and Social 416 Gin, a branding partnership with the Detroit Tigers baseball team.

Continuing up the west shore (the east shore by boat), the last stop up the peninsula is Grand Traverse Distillery, on the outskirts of Traverse City. Michigan native Kent Rabish founded his family-run business 17 years ago. Like New Holland, Grand Traverse kept growing with the craft distilling movement; its cocktails are now available at three satellite tasting rooms in downtown Traverse City, Mackinaw City and Frankenmuth.

Grand Traverse makes vodka from both rye and wheat and chose wheat for the base of its gin. Rabish said, “We selected our wheat vodka over our rye vodka [the mash bills are 100 per cent wheat and 100 per cent rye] because the rye has the character of rye that comes through. The wheat has its own character, but is very mild, and in gin would not be noticeable or change the flavour of the gin.”

The delicate wheat base lends a softness to Grand Traverse’s Peninsula Gin, letting the juniper and citrus notes shine against a clear backdrop. Barrel-Rested Peninsula Gin, a blend of gins spending an average of 10 months in ex-bourbon and ex-rye whiskey barrels, shows the same juniper brightness with sweet floral notes shining through a warm mélange of zest and vanilla.

Grand Traverse’s Mackinaw City tasting room is the last stop before crossing the Mackinac Bridge to the Upper Peninsula. The coast turns west and the highway stretches for hours through Paul Bunyan land, without a distillery in sight, until you reach Wisconsin. The eastern shore of Wisconsin (the western shore of the lake) is home to about a dozen gin makers.

The story of Lake Michigan gins is complete with Milwaukee’s Great Lakes Distillery – not because it is the first legal distillery in Wisconsin since Prohibition, but because its founder Guy Rehorst was a pivotal figure in the infancy of the craft distilling resurgence.

About the same time Rehorst founded Great Lakes Distillery in 2004, he created an online forum for the craft distilling community. Information that now seems basic knowledge was held in tight circles 18 years ago. The forum became a virtual meeting place where small startups could trade secrets about the mysterious endeavour of distilling.

Great Lakes Distillery was founded at a time when vodka paid the bills; it was the distillery’s first spirit while Rehorst worked on his gin recipe. He made gin because he liked it, and Rehorst Gin is the distillery’s flagship brand. His idea of using Wisconsin ginseng was unique at the time; it has since been repeated by several distilleries.

Great Lakes Distillery makes seven types of gin, all with the same nine-botanical recipe. Rehorst Gin is joined by three aged gins: Barrel Reserve Gin, Bottled in Bond Gin and Batch Z Gin (aged in Zinfandel wine casks). The distillery uses fruit brandies – apple, pear and cherry – for the base of its three Orchard Gins, and each one displays the botanicals in very different ways.

The tasting room makes numerous cocktails using the distillery’s portfolio, which includes whiskeys, rums and liqueurs alongside gins and brandies. It is within staggering distance of the Harley-Davidson Museum.

Driving around the lake from Chicago to Milwaukee – a route not recommended by MapQuest – would take 14 hours if you just sped by and waved at the distilleries. But where’s the fun in that? Take time, and plan accordingly. The last leg of the Lake Michigan gin tour takes just an hour and a half, driving from Great Lakes Distillery to FEW Spirits, back where the adventure started.

0 comments on “US road trip: Gin pioneers around Lake Michigan”