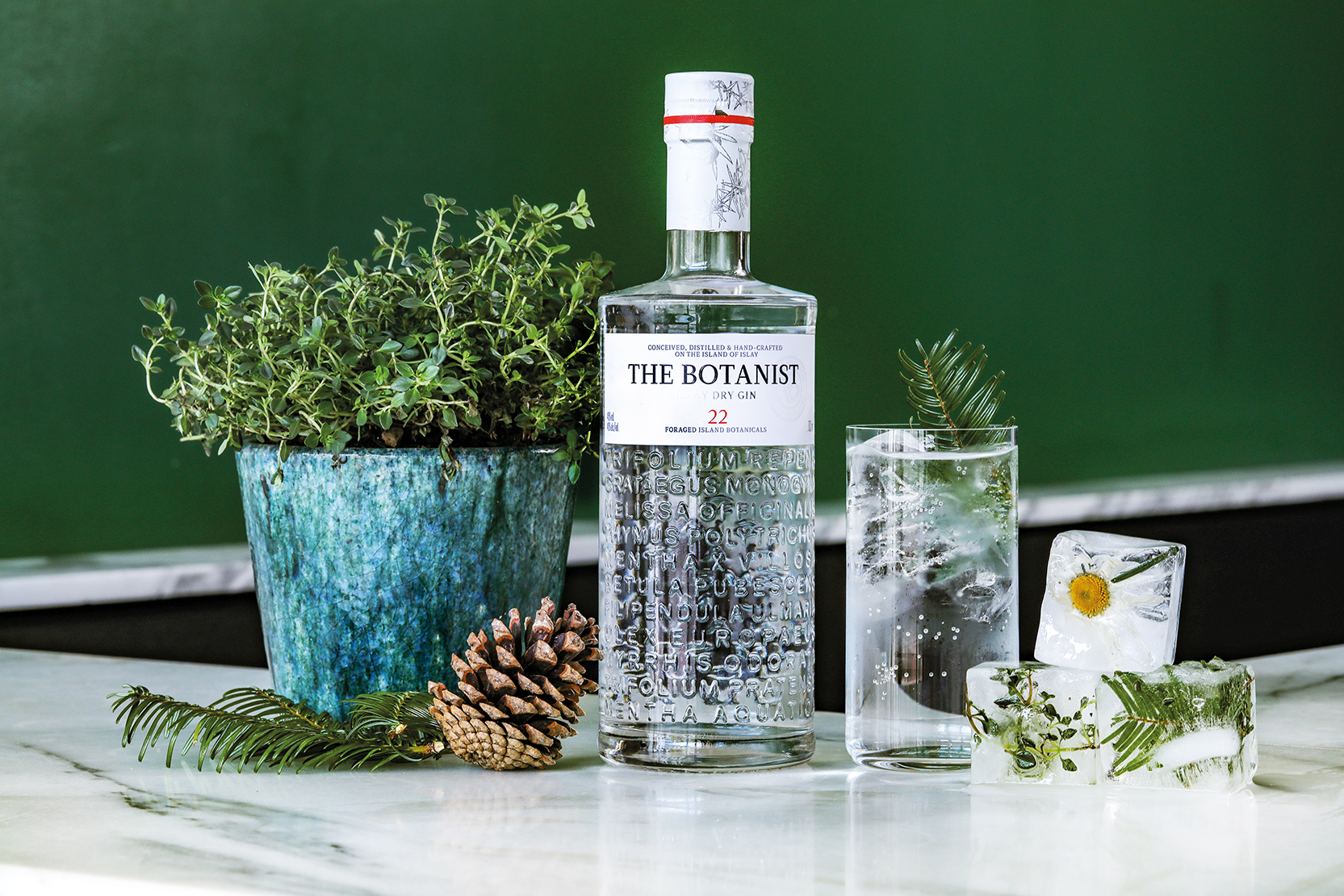 The intimate relationship between gin and Scotch whisky goes all the way back to the 18th century, with the first export of Scotch whisky to England for rectification into gin taking place in 1777. Members of the prolific Stein family were responsible for this trade, which proved highly lucrative.

Predictably, English gin distillers were far from happy with this situation, and lobbied parliament in an attempt to bring it to an end. The government responded with the 1786 Scotch Distillery Act, which imposed prohibitively high levels of duty on spirits crossing the border. Exports of whisky destined for the English gin market collapsed to barely 8 per cent of the previous year, and several major Scottish distillers were ruined as a result.

Gin and whisky in Scotland today

There are currently some 20 Scottish distilleries making gin as well as whisky, all but four of which have been established during the last two decades. When asking Scottish start-up distillers why they are producing gin, a common answer is that they need to make money while they wait three years for their whisky to reach the age where it can be bottled and sold.

However, financial necessity is by no means the only reason whisky distillers make gin, as conversations with some of the figures heading up the latest generation of whisky and gin distilleries confirms.

Iain Stirling is one of the founders of Arbikie Highland Estate Distillery, located near Arbroath on the Scottish east coast, and operational since 2015. When asked why Arbikie makes gin, as well as vodka and whisky, Stirling says, “The simple answer is as farmers we were already growing the crops, potatoes and wheat, that we could distil into vodka and then gin. We were also growing barley, so whisky was an obvious route, too.

“There was an opportunity to use the ‘wonky’ potatoes that our supermarket customers rejected for distilling vodka, and so we launched Arbikie with Scotland’s first potato vodka, Tattie Bogle, and used this as the base spirit for our first gin, Kirsty’s Gin. This was followed by using our wheat to distil our Haar Vodka, which in turn was used as the base spirit to create AK’s Gin.”

One of the latest gin and whisky distilleries to be established in Scotland is Ardross, some 25 miles north of Inverness, where Theodore Gin is produced alongside single malt whisky. Barthelemy Brosseau, the founder and chief executive of Ardross’ owner, Greenwood Distillers, says creating a gin was a “low-expense way for me to learn the ropes”.

“I knew that in the future when we had sufficient inventory of whisky at Ardross, we would have to go through the whole business of selecting liquid, designing a bottle, arranging a distribution network and so on,” he says. “You have great freedom to explore with gin – it’s so versatile, and [is] a blank canvas for me. So, when it comes to whisky, I will know exactly what I’m looking for with the team around me.

“As for gin being an easy way to make money while you wait for your whisky to mature: if you think that, then you’re in for a rough ride! You must have a passion for the product and the process as it’s crazy competitive.”

The modern-day relationship between Scotch whisky and gin really began in 1998, when production of two of the biggest gin names in the world – Gordon’s and Tanqueray – was transferred to Scotland from the south of England. With the move to Diageo’s Cameronbridge grain distillery in Fife, a Scottish distillery became the leading centre of gin production in the UK.

The following year saw the launch by William Grant & Sons of Hendrick’s, the first super-premium Scottish gin. The independent distiller has also established the Hendrick’s Gin Palace within its Girvan grain distillery complex on the Ayrshire coast.

Lesley Gracie, master distiller of Hendrick’s Gin, recalls, “One day, Charlie Gordon [great-grandson of William Grant, the company founder] asked me to help make a new gin. I remember being a bit confused and kind of thought, ‘You want a gin now? That’s a bit odd’, because gin wasn’t really doing very much at the time. It had been really popular in the ’70s and ’80s but it was declining and nobody was really drinking it at the time. There were just a handful of gins on the back bar – it was quite an unloved category.

“However, Charlie could see a time when people would fall in love with gin again. He really was a visionary in that respect.”

To create his gin, Charlie used two stills he had bought at auction in 1966: a rare Carter-head still from 1948 and a vintage Bennett pot still dating from 1860. When it came to the style of Hendrick’s, again Charlie was active, with Lesley noting that he was clear on what he wanted. “Gin at the time was considered to be a very British drink, yet none of the botanicals used to create it were particularly British,” she explains. “Charlie wanted a bold new kind of gin with real character and flavour. He wanted it to include rose and cucumber – you can’t get more quintessentially British than rose gardens and cucumber sandwiches! So, with that pretty tight brief I got on with figuring out how to bring all those elements together to create the round flavour profile of Hendrick’s.”

After seeing the commercial success of Handrick’s, Inver House Distillers also followed the gin route at one of its Scotch whisky distilleries, starting to produce Caorunn at Balmenach malt distillery in Speyside in 2009.

Martin Leonard, Inver House managing director, says, “We looked at areas we believed would grow [for premium spirits] and considered rum and gin. We established that we had gin expertise in-house and we had in storage a copper berry chamber that was built in the USA during the 1920s, and therefore decided to build on this.”

Balmenach distillery, with a history dating back to 1824, was chosen as the location for Inver House’s gin production as it had space available, with the former cask filling store being converted into the Caorunn gin distillery.

Martin explains, “The style of Caorunn was inspired by the Celtic botanicals that could be foraged locally (rowanberry, bog myrtle, heather, Coul Blush apple and dandelion leaf), and which through slow vapour infusion would be perfectly balanced with the more traditional gin botanicals – juniper, lemon peel, coriander seed, cassia bark, orange peel and angelica root. We wanted to produce a modern take on the traditional London dry gin.”

A third established Scotch whisky distillery to pursue gin making was Bruichladdich on the island of Islay. Having been founded in 1881, it is a youngster compared with Balmenach. At Bruichladdich, a gin named The Botanist is distilled using locally foraged ingredients in a converted ‘Lomond’ still, which formerly made malt whisky at the now-demolished Inverleven distillery at Dumbarton, near Glasgow.

The Lomond, a copper pot with rectification plates in its neck, is not a pretty vessel when compared to the graceful, long-necked pot stills already in situ at Bruichladdich, and its appearance earned it the nickname ‘Ugly Betty’.

Simon Coughlin was one of the key figures behind the 2000 revival of the silent Bruichladdich distillery, now owned by Rémy Cointreau. He says, “We did it the wrong way round, compared to what’s happening currently in the Scottish gin boom. They start with gin while they wait for the whisky to mature. We’d been making fabulous experimental whisky for 10 years when we first thought about trying to make a gin.”

With more start-up Scottish distilling ventures either under construction or at the planning stage, most with eyes on both white and brown spirits, it seems certain that gin and Scotch whisky will continue to be cosy bedfellows in the years ahead.

0 comments on “How Scotch whisky influences the country’s gin”