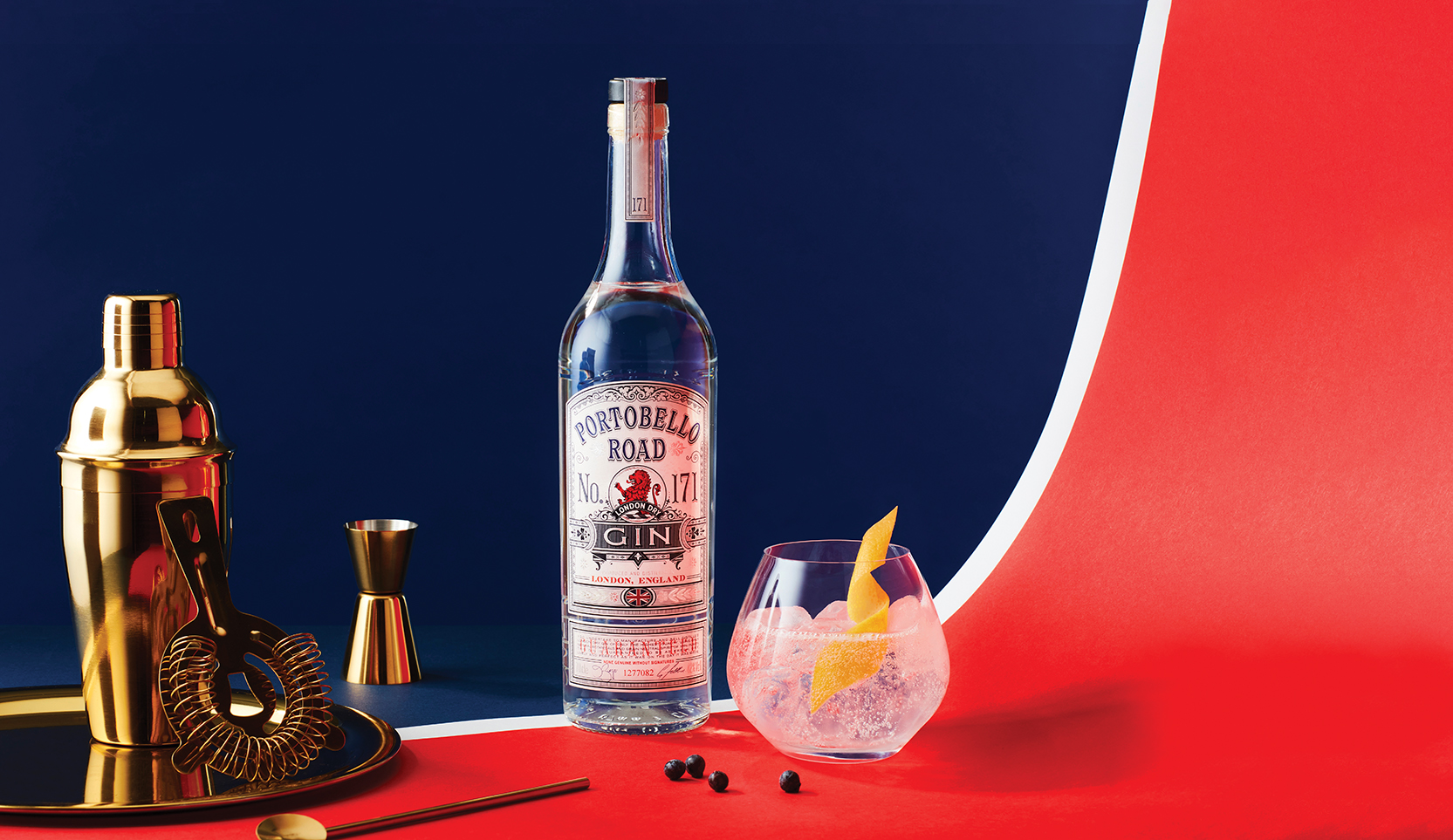 There are those who are interested in history, and there are those whose desire to learn about the past becomes a life-changing obsession. Although he’s fairly low-key about it, Portobello Road’s head distiller Jake Burger falls into the latter category.

Around 12 years ago, Burger and a couple of bartender friends, Paul Lane and Ged Feltham, decided to create a public museum for their large collection of alcohol and distilling memorabilia. This museum, named The Ginstitute, found its home on the top two floors of a Victorian public house in Portobello Road, London. Given that craft gin making was on the rise at the time (after fellow London distillery Sipsmith challenged a historical ruling on small-scale production), the trio also decided to have a crack at distilling. After all, there’s a nice sense of poetry in a gin museum having its own modern-day gin, isn’t there?

The trio enlisted the help of veteran gin distiller Charles Maxwell to design their recipe and launched their flagship Portobello Road London Dry No. 171 Gin in 2011. It’s distilled with an English wheat spirit and nine botanicals including nutmeg, cassia and bitter orange, and its recommended garnish is a pink grapefruit twist (in 2011, that was pretty ‘out there’ in garnish terms).

In the decade since, The Ginstitute has grown into one of the UK’s top gin experience venues, offering everything from gin-making sessions to immersive dining, and its home at 186 Portobello Road now encompasses two bars and a boutique hotel. The distillery’s drinks range has grown as well, with six core gins, a collection of vodkas, and a lower-alcohol spirit, Temperance. But while many modern distillers are pushing to find the new, in botanicals and techniques, Portobello Road has made an artform of revitalising the old.

The majority of the distillery’s gins fall into what Burger terms the “historical collection”. As the name suggests, these are gins influenced by or emulating bygone eras and styles – but with modern skills and panache. Discussing the range, Burger makes many references to his research, with source material ranging from old cocktail recipe collections to historical novels.

It was a collection of writings by Charles Dickens, Sketches by Boz, which provided the inspiration for one of Portobello Road’s most intriguing releases to date. Burger explains that, in one of the sketches, Dickens describes the sights, sounds and smells of a Victorian gin palace, where barrels of gin were lined up behind the bar with “fairly catchy names” – including a Celebrated Butter Gin. “The word ‘butter’ meant something of higher quality, like ‘cream of the crop’,” Burger says. “When we did more research, we found out it was probably produced by [Victorian distiller] Brownings. It was considered to be about as high a quality of gin that you could get at the time.”

In its recipe, Portobello Road took the name literally, distilling its London Dry Gin with several blocks of butter in the still. Portobello Road Celebrated Butter Gin was initially launched as a distillery-only product, but proved such a hit with customers in the bar that it was made a permanent fixture. “Everybody hates me for inventing it,” Burger laughs. “Like all of our niche products, it’s made in-house, and it always will be, as I don’t think we could convince anyone else to put butter in their stills. It is one that intrigues people… There is a taste of butter to it, but it is the mouthfeel that changes, with that richness and viscosity.”

While it creates a great gin, the process also creates a bit of a mess, leaving behind a slick of butter in the still (Portobello Road now has a 60-litre still dedicated to the Celebrated Butter, so as to avoid adulterating its other equipment). Once, the team scraped the butter out post-distillation and rechilled it – the resulting butter was gin flavoured, leading Burger to conclude that the fat was removing some of the spirit’s botanical intensity.

Next, Burger turned his attention to Old Tom gin. Once again, historical research provided the point of difference. While many modern iterations are based on late 19th-century Old Tom gin recipes – popular with bartenders at the time and used in many classic cocktail recipes – Burger found the style originated at Hodges Distillery in London around a century earlier, and that it was likely named after the company’s master distiller, Tom Chamberlain. “The distillery was founded in the 1780s or 90s and, by the turn of the century, this [Old Tom] was an incredibly popular gin. Foolishly, they never copyrighted the name, so lots of other people started making Old Tom gins, but Hodges was considered the original and best at the time,” Burger says.

“It was our attempt to recreate that product and make it as accurately as we could. I found a great book from the era telling people how to fake the popular products of the day – all nefarious activities, but it did have a recipe in it for a gin to replicate Hodges Old Tom. It included five botanicals that were part of our London Dry recipe.”

Portobello Road Old Tom is very traditional in two major ways. First, it uses a pot-distilled base spirit, as the 18th-century style it’s based on predates column distillation. Secondly, it’s cask aged for 10-12 weeks before bottling, using barrels crafted from an ex-sherry cask given to the distillery by a Scotch whisky maker. The resulting wood-influenced, golden-hued spirit may be authentic to the Hodges Old Tom, but Jake points out that it can’t actually be called a gin these days, as its base spirit has not been distilled to the 96%-ABV strength mandated by UK regulations (if you look closely, you won’t find the word ‘gin’ on the bottle).

Then came the Sloeberry and Blackcurrant Gin, a full-strength fruit bomb of a spirit, first released in November 2020. Burger says fans had been “expecting” a Portobello Road sloe gin, and at first, he’d resisted. “Like we do with anything, we [didn’t] want it to taste exactly the same as everything else.”

So, he did it his way. The base spirit for the Sloeberry and Blackcurrant is a “Portobello Road concentrate”, with a higher strength and higher botanical intensity. The gin includes small proportions of a French blackcurrant liqueur and an Italian cherry liqueur. Burgers says, “The cherry liqueur dials up the stone fruit notes and the cassis gives a syrupy, creamy blackcurrant sweetness.” Like the Old Tom, this gin is barrel aged, but Burger uses more flavourful ex-bourbon barrels and leaves the gin in them for several months. The result, he says, is a gin with great depth of flavour that works “fantastically well” in cocktails.

To celebrate the brand’s 10th anniversary in autumn 2021, Burger embarked on a limited-edition distillation project. He wanted to put the Portobello Road spin on another historical style – and this time he chose the daddy of them all, London dry gin. “It was a culmination of me overthinking gin,” Burger jokes. “The London dry gin regulations are a wonderful thing and I heartily approve of most elements of them, but while rules are great for preserving the integrity of a historic category, they can stifle creativity and innovation, so we were thinking about how we could innovate within the confines of the London dry gin regulations.”

And innovate they did. First, Burger swapped out the British wheat spirit used for Portobello Road’s other gins for the potato spirit used in its vodkas. Then he developed a new technique, which he dubbed “reverse ageing”, to get some wood influence into the spirit. A London dry gin can’t be aged, as the regulations state that it can’t be “flavoured” post-distillation, so instead, he rested the potato base spirit in barrels before redistilling it with the botanicals. (Questionable, in terms of the regulations? Possibly. Worth the gamble? Certainly.) Burger found that juniper-forward gins were scoring higher with drinkers and bartenders, so the Special Reserve 101 recipe includes 50 per cent more juniper than Portobello Road’s London Dry Gin. It is bottled at a punchy 50.5% ABV, or 101 proof; in the American whiskey world, this is known as “Kentucky strength”. Finally, instead of purified still water, the gin is diluted with carbonated Vichy Catalan – statistically, the most mineral-rich bottled water in the world. It is exclusively available through the distillery.

From old to new

If Portobello Road’s core range is an example of traditional experimentation, its Director’s Cut series is its playground for modern experimentation. Launched in 2015, the editions are released to coincide with co-founder Ged Feltham’s birthday in October. The series sees one of the distillery’s directors choose and then collect a key botanical. In 2015, co-founder and former director Paul Lane chose asparagus, and went to pick some at the end of the harvest season in southern England. In 2016, Feltham picked peat and went back to his ancestral home, Ireland, to dig some up. Burger and a colleague then used the peat to smoke juniper berries (a laborious process that Burger is keen not to repeat). In 2017, Burger went to Grenada to collect nutmeg for his Pechuga Gin. The name comes from a particular mezcal production technique which sees a poultry breast (‘pechuga’ in Spanish) hung over the still – and Burger honoured this tradition, precariously suspending a 2.4kg turkey breast over the still for the gin’s 24-hour distillation. The final Director’s Cut to date, Parsnip in a Pear Tree, was released in 2018 and used parsnips (collected from Portobello Road market by brand director Tom Coates) and pear liqueur.