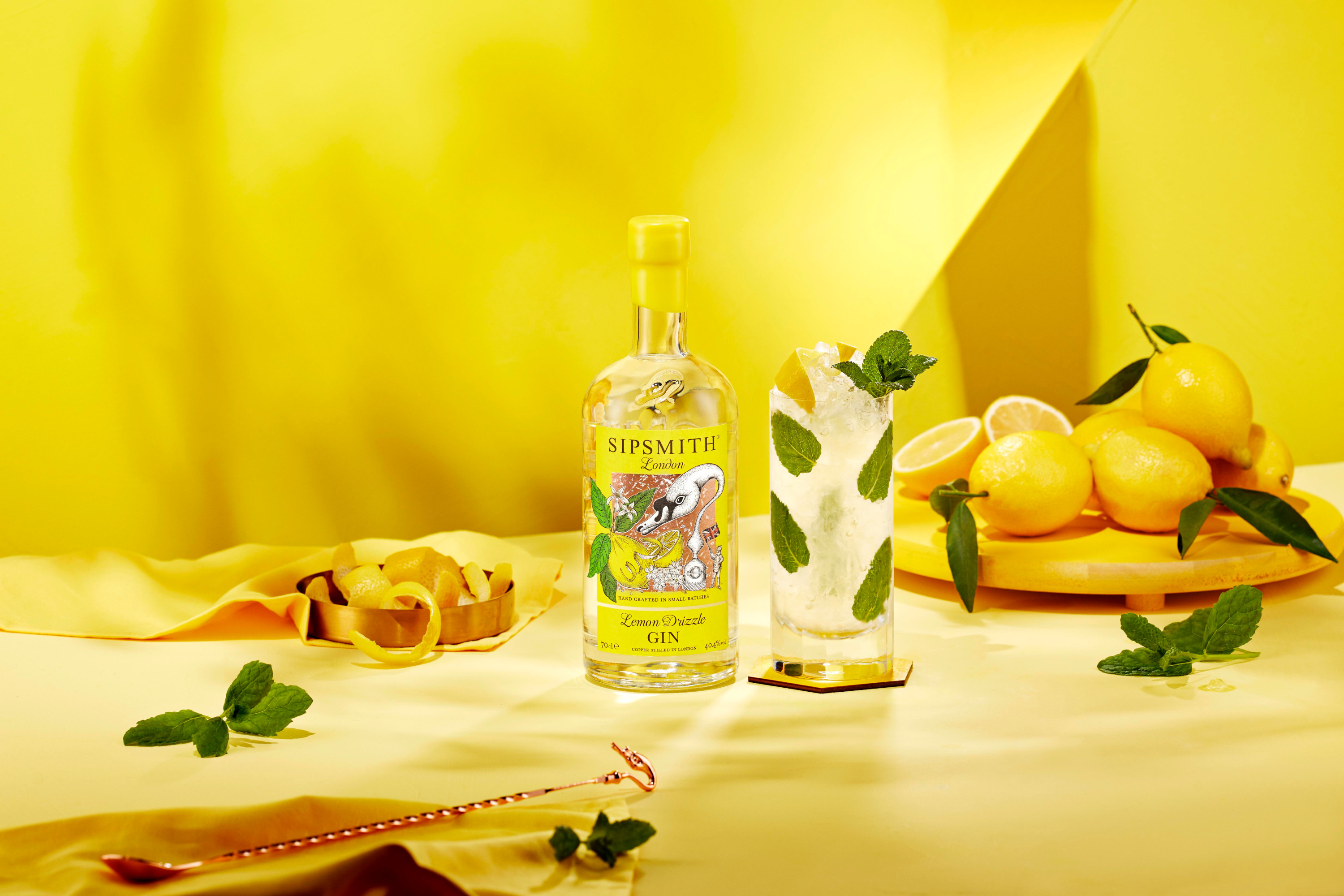 Travel down any gin aisle and you’ll find bottle after bottle of liquid distilled with fruit. The last few years have seen an explosion of these sometimes-outrageous offerings, but what exactly is fruit gin and most importantly, which one should you pick?

While flavoured gins seem to have magically appeared, this isn’t their first, second, or even fourth time gracing the shelves. The earliest known formula combining juniper and fruit (citrus) appears in The Distiller of London, a book from the Worshipful Company of Distillers, published in London in 1639. These gins were usually sweetened, closer to today’s gin liqueurs, which makes sense as the “dry” gin style didn’t exist at the time (Coffey didn’t set up his still factory until 1835).

Advertisements for these “modern” fruit gins (labelled as “flavoured gin”) started showing up in British newspapers in the early 1800s. While no fruit was off limits, citrus profiles dominated, showing up in the 1830s (orange) and 1850s (lemon) long before other “traditional” fruit gins, such as sloe. Due to the cost of shipping fresh citrus, the flesh was preserved while the peels were dried and used for distillation. The trend subsided in the late 19th century before a small resurgence in the 1920s, led by the success of Gordon’s Ready-to-Serve Shaker Cocktail range. Gordon’s Orange debuted in 1929 and Gordon’s Lemon in 1931. With growing interest, this new craze seemed unstoppable – so what happened? Vodka. Gin was no longer cool, with all that pesky juniper. Although, to be fair, flavoured vodka didn’t debut until 1986 with Absolute Peppar.

How did we go from a buttoned-up connoisseur to a laid-back gin and juice drinker where the fruit was in the bottle? Look to global juggernaut Seagram’s, and the release of its first fruit gin in 1996, Lime Twisted. It aimed to appeal to the gin and tonic drinkers who needn’t purchase any citrus. It wasn’t until 2007 that Seagram’s launched its second flavour, the now-discontinued Orange Twisted. In a bid to appeal to a younger urban demographic, it eventually rebranded these fruit gins as its “Twisted” line-up; its sixth flavour, Twisted Watermelon, was released in 2020.

Beefeater dipped its toe into the fruit gin market in 1999 with Beefeater Wet (discontinued 2005), a lower-ABV gin with extra spice notes, pear essence and a bit of sugar. That same year, Hendrick’s Gin launched: not a fruit gin by today’s standards, but one could argue that the success of the cucumber (botanically a fruit) complimenting the juniper lit the match that ignited the flame. Maybe it was craft gin visionary Sipsmith, whose 2016 Marks & Spencer exclusive, Lemon Drizzle, sold out in a weekend, that fanned the fruit gin craze into the frenzy it is today.

More likely, it would be the reigning queen of the category, pink gin. Gordon’s released its Premium Pink strawberry, raspberry and redcurrant gin in 2017; it was less than two years before it broke the million-case mark, inspiring hundreds of blush-hued clones. Last year’s Bombay Bramble launch, a blackberry and raspberry gin, was Bombay Sapphire’s first new expression in 10 years. It features 100 per cent natural fruit ingredients (added post distillation) giving the gin its signature crimson colour. It’s delicious as a topper to your favourite sparkling wine.

It isn’t just Europeans that are excited by the rainbow of flavours – the Americas are ripe with fruit gins. Michigan is home to the blueberries used in Blueberry Knickerbocker gin (formerly Knickerbocker Blue Haven) from New Holland Brewing and Distilling, which was rebranded to play up the growing fruit gin market. The demand for these fruit-focused gins led the distillery to create a grapefruit gin and ready-to-drink cans featuring its blueberry gin and lemonade.

Ontario, Canada is home to early fruit gin pioneer, Dillon’s Small Batch Distillers. It not only has a Cherry Gin, made by resting sour cherries in its rye-based gin, but a Strawberry Gin and seasonal distillery-only releases highlighting plum, melon, pineapple and rhubarb. Not to be outdone, the husband-and-wife team behind Grit City Distilling in Alberta, Canada have created not only a Forbidden Fruit Gin, featuring the humble grapefruit, but also Cranberry Spiced Gin Liqueur and a Toasted Coconut Gin. (Yes, coconut is a fruit, but it is also classified as a seed and a nut.)

Japan has a few gins showcasing traditional fruit, such as Roku’s use of yuzu or Nikka Coffey’s Amanatsu, a small pomelo, and Shequasar, a green citrus closely related to the calamansi. It is Kanosuke Distillery’s Komasa Sakurajima Komikan Gin that holds my deep respect. With a shochu base, heavy juniper, coriander and Sakurajima Komikan, a small mandarin that grows in the volcanic soils of Kagoshima, it is bottled at a whopping 49% ABV and makes delicately powerful Martinis.

No conversation of fruit gin is complete without cluster fruit trailblazers Four Pillars in Australia’s Yarra Valley and its annual summer release, Bloody Shiraz Gin, launched in 2015. Founder and distiller Cameron Mackenzie’s game-changing gin sees 250kg of local shiraz grapes steeped in high-proof gin for eight weeks before pressing and blending with Four Pillars gin. It’s bottled with no added sugar at a higher proof than most sloe gins. This deep reddish-purple spirit is best served with citrus and carbonation, balancing the juniper, spice and jammy qualities that have inspired countless other grape fruit gins in Australia.

Some purists might sour at the thought of “enhanced” gins out-selling traditional styles, but they they do: in 2021, the research by the Wine and Spirit Trade Association (WSTA) found that 40 per cent of the total gin market was flavoured and fruit gins. Heck, I was skeptical when the Doggfather of Rap released Indoggo Gin – with “seven premium botanicals flavoured with all-natural strawberry flavour” – but honestly, I liked it. It was delicious with pineapple juice and soda water even if Snoop Dogg himself just enjoys it over ice.

There is no denying that fruit gin is more than a trend; it is a movement building steam over the centuries. We are just now seeing what it’s all about, and I for one am here for it, tonic in hand, garnishes be damned!

So, now that you’ve decided to jump in, how do you drink these fabulous fruit gins?

This cocktail was created by Dutch writer Willem Slagter while keeping “office” at The American Hotel in Amsterdam and is featured in his 1950s book Internationale Cocktailgids. The cocktail was as forgotten as orange gin itself until it was printed in the pages of Ted Haigh’s 2009 book Vintage Spirits and Forgotten Cocktails.

Combine and shake with ice. Strain into a cocktail glass. Garnish with orange twist.

In 2019, Singapore’s award-winning bar ATLAS did more than serve vintage orange gins: it teamed up with St. George Distillery in Alameda, California to create a bespoke one available only at the bar. Alongside its perfect serve suggestion of Mediterranean tonic and an orange slice, bar manager Jesse Vida serves an Orange Blossom Martini. This drink highlights both fresh and dry Seville orange and bergamot peels, and Valencia orange blossoms to shape and focus the citrus, along with dill and Malabar black peppercorns for balance.

Combine and stir with ice. Strain into a cocktail glass. Garnish with a fresh mint leaf.

My favourite way to get my (gasp) non-gin drinking friends to fall in love is by switching fruit gins into non-gin cocktails and not telling them. This gin mojito is the go-to cocktail.

Add mint to a glass and muddle with crushed ice. Add lemon gin, juice, and syrup. Top up with more crushed ice and soda water. Garnish with a bouquet of mint (the more the merrier).

0 comments on “Fruit gins: How and why they became so popular”