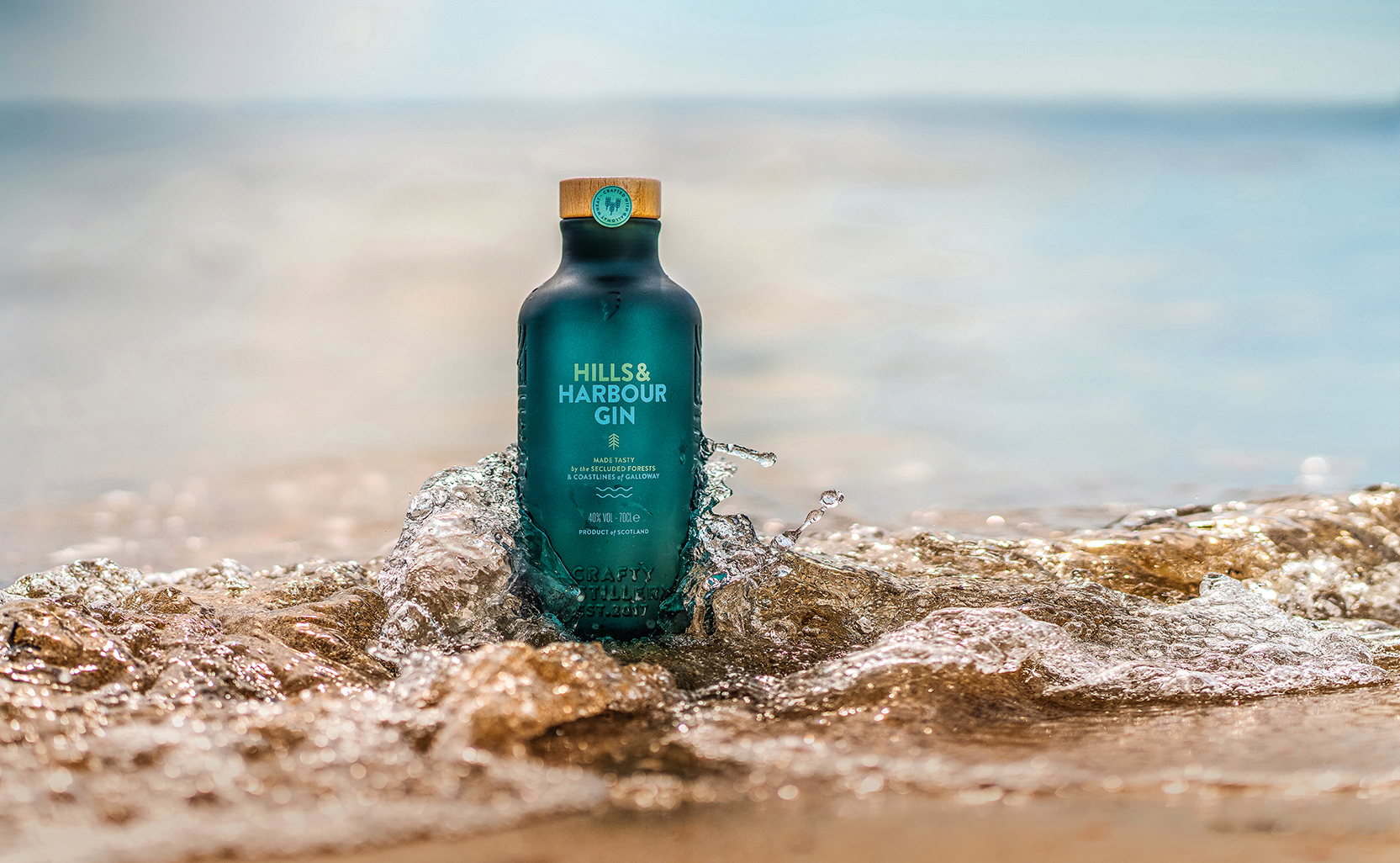 The air is crisp and green. An autumnal carpet crunches under my boots as I trek up the hill, following my guide, Crafty Distillery founder Graham Taylor, through the Galloway Forest. We’re making for a patch of noble firs from which the distillery harvests fresh cones for its award-winning Hills & Harbour Gin. Taylor explains, “It’s not a common tree in the forest, but it is one that is easy to spot, because [the cones] grow upwards rather than downwards.”

At Graham’s command, I rub a few freshly picked fir needles between my fingers and am treated to an aromatic burst of citrusy, coniferous bitterness. My eyes are closed as I revel in the scent… but when I open them, I’m not in the Galloway Forest – I’m in an office in Norfolk. Graham is talking to me on the phone from his distillery in Newton Stewart, taking me step-by-step through the Crafty Distillery Gin Escape. It’s a particularly special visitor experience, designed to introduce gin lovers to the two locally foraged botanicals in Hills & Harbour: noble fir and bladderwrack seaweed.

This behind-the-scenes look at its gin making exemplifies what Crafty Distillery has been about since opening in 2017: namely, craft. It is one of only around a dozen gin distilleries in Scotland and England to make its own base spirit, which is distilled from locally grown wheat. As well as gin, this spirit is used to make Crafty’s 24 Seven Vodka and the soon-to-be-released Billy & Co whisky (named after Taylor’s late father, William, who built the distillery).

Taylor is passionate about his artisanal grain-to-glass approach and creating spirits that reflect the place of their birth. The Gin Escape is his way of sharing that journey. “We were of the mindset that we really want to help people understand what provenance is and what craft really means. It is not driven by marketing – it is driven by taste, and coupling that with how we actually make our gin,” he explains. “It is a fun story of quality and provenance that I think is really exciting for a visitor, so they can leave a bit more enlightened. We have been unable to travel, so we are seeking more experiences, but especially now, people are wanting to know the story behind the brands in the cupboard: how they make it, the people and the process behind it.”

Taylor says he generally starts the tours in the forest, as we have done on this occasion. “It’s 92,000 hectares of wilderness … The beauty of it is being in that environment. Nothing returns you to ‘zero’ quicker than a walk in the woods,” he says.

Now, we’re ready to recommence. I close my eyes again and we carry on to the coast. We’re in search of fresh bladderwrack seaweed that will have been left behind by the receding tide. Referred to as the “reed of the sea”, seaweed works to filter impurities from the water it grows in – so, the purer the water, the better the seaweed. With this in mind, Crafty Distillery harvests its bladderwrack from one of the cleanest stretches of beach on Scotland’s south-west coast, at Knockbrex beach. Formerly part of a private estate, the beach is home to crystal-clear waters, as well as a lido which is still used by locals and visitors who can brave the chilly dip. Like noble fir cones, bladderwrack seaweed can be foraged year-round; the distillery team visit the beach once or twice a month to gather what they need to distil Hills & Harbour.

Seaweed has been adopted by a number of British gin brands to add an umami tang to their gins. However, Taylor says he and his distillery manager Craig Rankin, a trained chef with high-end restaurant experience, view its savoury salinity in another way – through the lens of salt’s flavour-enhancing effect on the tastebuds. “It is amazing to me how many gins don’t use this science,” Taylor says. “It is really important to have that savoury quality going on because it enhances the flavour of the gin … if you don’t season something, you cannot open up the palate.”

Once the foraging is done, it’s time to sample the gin. The Crafty team has packed up the ingredients to make two cocktails that highlight the differing contributions of noble fir and bladderwrack to Hills & Harbour Gin: the bitter, citrusy Galloway Forager, and the crisp Hills & Harbour Margarita (scroll down to find the recipes). To go with the drinks, the distillery has put together a Galloway Picnic featuring cheeses, cured and smoked meats, and fresh bread, which is all served on a platter made from local stone.

Flexibility is a key tenet of the Gin Escape. A consultation takes place beforehand so staff can learn exactly what guests hope to get out of their experience. Whether they want to go for a short trek through the forest or a dip in the sea, enjoy their cocktails and picnic back at the distillery rather than out in nature (a useful option depending on the weather) or spend extra time discussing the intricacies of Crafty’s distillation process with the guide, it can all be planned in.

Now, it’s back to the distillery (earlier in the pandemic, people were asked to drive themselves between the distillery and the tour stops, but now the team is moving back to the original arrangement of chauffeuring guests in a distillery vehicle). To cap off the Gin Escape there is an hour-long tour of the distillery, covering the creation of the base alcohol and how Hills & Harbour Gin, with its 11 botanicals, is distilled. There’s a chance to taste Hills & Harbour in a house-recipe gin and tonic, as well as the distillery’s charcoal-filtered vodka and its Smokey & Citrus bottled gin cocktail (“a big banging cocktail”, according to Taylor).

That brings us to the end of the Gin Escape. I’m still at my desk in Norfolk and haven’t touched a drop of gin, but Taylor’s engaging and immersive talk through the experience had me feeling a brisk Scottish breeze through my hair, salty sea air in my nostrils, and the tingle of a cold, piney gin and tonic on my lips. For Taylor, building a connection to the landscape is almost as important a part of the tour as the gin itself. “We grew up in this region and we are really proud of it. We know it is a hidden gem,” he says. “We are too connected to our devices and to the ‘instant’ these days. It is a reality of how we all work … Just being outside and having a bit of fun and connecting with where things come from – that was resonating before, but even more so now.”

In Hills & Harbour Gin, Crafty Distillery’s flagship product, Taylor says he wanted to capture the sensory experience of Galloway in a bottle with a spirit that was “balanced, vibrant and accessible”. The distillery crafts its own base alcohol and forages noble fir cones and bladderwrack seaweed locally to combine with the gin’s nine other botanicals, which include juniper, orange peel, liquorice root, dried mango, bay leaf and green szechuan pepper. Due to the on-site distillation of the base alcohol (including a seven-day fermentation process), the production process for Hills & Harbour is much longer than other gins at around 13 days.

In creating the original recipe, Crafty Distillery sought help from hundreds of members of the public, sharing samples with them to get feedback for the final recipe. Taylor says, “All of the feedback and the trends showed us clearly what people wanted: a gin with big flavours, but not one that was unbalanced.”

Add all the ingredients to a cocktail shaker with ice and shake to release the noble fir oils. Strain into a rocks glass with ice and garnish with fresh red grapefruit.

Mix together some dried seaweed powder and sea salt on a saucer. Run a lemon wedge around the rim of a margarita-style glass to wet it, then dip it in the seaweed and sea salt mix. To make the drink, add all the ingredients to a shaker with ice and shake. Strain into the rimmed glass.

0 comments on “Crafty Distillery: From hills to harbour”