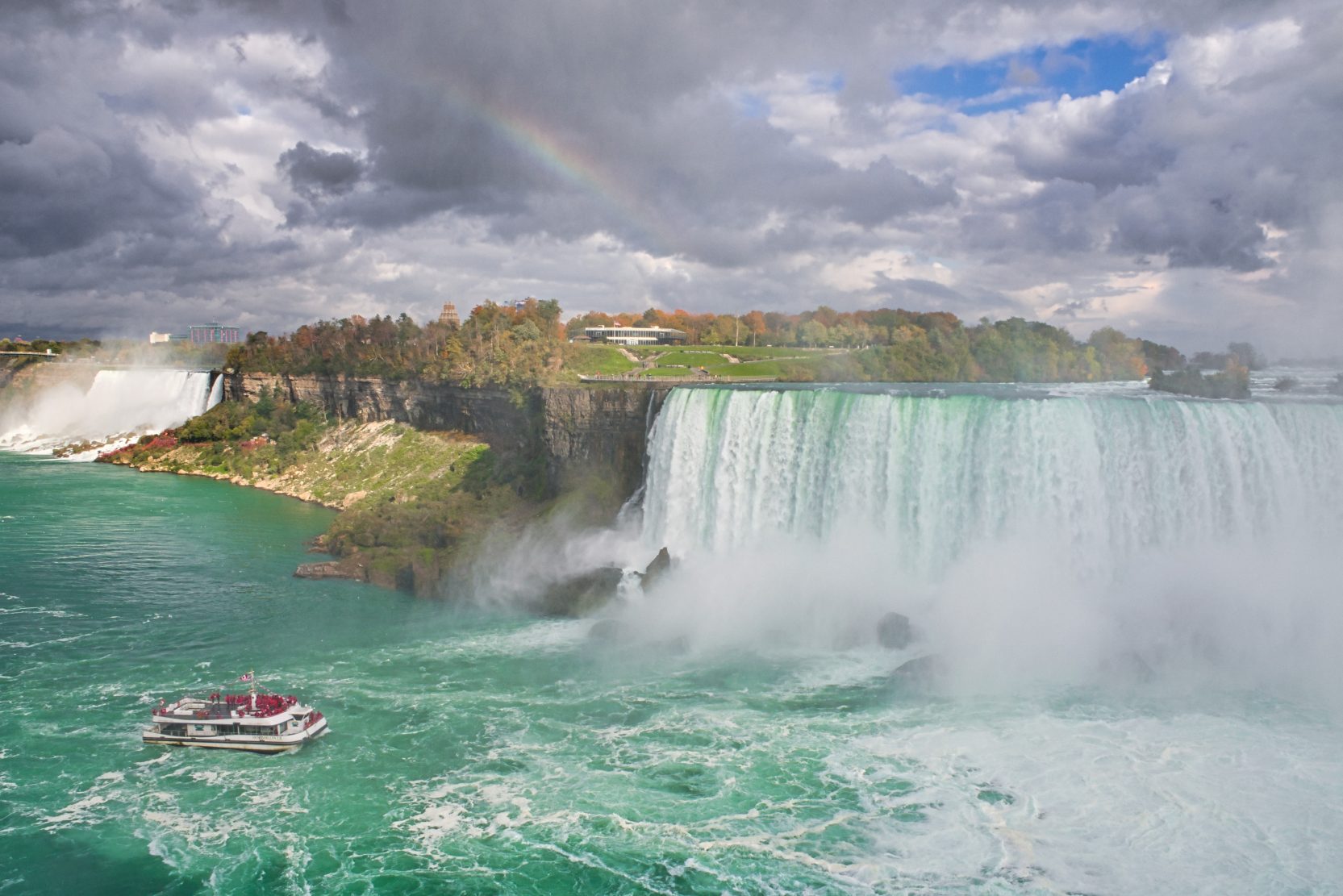 Experience the thrills, chills and spills of gin making in Canada’s Niagara region

“Some things can be done as well as others,” said daredevil Sam Patch, the first human to plunge into the waters of Niagara Falls and live. Just 10 days later, to a crowd of thousands, he climbed atop a higher platform and repeated the feat. People championed him as a hero, although the fish thought he was nuts.

Most daredevils who followed this 1829 act didn’t have Patch’s luck. In 1901, Annie Taylor survived plunging over The Falls in a wooden barrel, but fame and fortune didn’t last – she died broke. Bobby Leach used a steel barrel in 1911, surviving with a broken jaw and kneecaps, then died after slipping on an orange peel. After Charles G. Stephens’ attempt, all that remained of him was one arm, still clinging to his barrel.

Like the clueless summer daredevils who used to show up at Canadian airports with their skis, in August 1954, Swiss-born Otto Rieder was dumbfounded to see endless fruit orchards lining the Niagara highways as he toured the region. He was amazed that the farmers didn’t have distilleries on-site to process the excess fruit, as his father did in Switzerland. Fate planted a seed, and in the early 1970s, Rieder took his own leap of faith and brought distilling back to Niagara.

Exorbitant taxes and bureaucracy made opening a distillery in Canada seem riskier than hurtling over The Falls. Rieder had to sell at least CA$2 million worth of spirits each year to break even. So, with a young distiller named Bill Ashburn at his side, he subsidised his fruit spirit operation by distilling under contract for others. One such commission was for Kingsgate Gin, a German-style gin rich in coriander and liquorice notes, with a base containing a hint of Ontario wine spirit.

The region’s wineries blossomed through the 1980s, but gin’s popularity plummeted.

In 1992, a winemaker named John Hall bought Rieder’s distillery, intending to make whisky rather than gin. It was 2012 before a young, fearless Geoff Dillon and his father Dr Peter Dillon brought gin making back to Niagara, in a spectacular performance that made Patch’s stunt look tame.

Geoff split his time between helping at local wineries and working with his dad. Together, they spent an entire summer developing the recipe for their flagship Gin 22, and discovered in the process that this was what distilling was all about.

“Gin wasn’t a big deal back then,” says Dillon, “but it’s the most exciting spirit to make as a distiller. You get to play around with botanicals and distillation techniques, then add to and tweak those flavours.”

Initially inspired by Hall, Geoff too dreamed of making whisky. Gin would bridge the gap while his whisky matured. However, when technicians arrived from Germany during the 2011 grape harvest to set up his Christian Carl stills, Dillon says they remarked, “If you get grapes, you’re going to make the best base you can. It’s going to give you some sweetness and viscosity – an incredible base.” The thought clicked, and Dillon started talking with growers. “I didn’t want to use vodka. I wanted a complex base because it made making gin more fun. We were really cocktail focused, and gin was the spirit you’d want behind your bar.” Toronto’s bars, restaurants and surrounding areas quickly caught onto Dillon’s gin-making passion and spread the word.

Dillon distils his grape spirit to 94% ABV, so some flavour remains. “We could distil to a neutral base, but when you’re using grapes, what’s the point? Grapes are 20 times more expensive than corn. The whole point of grapes is to retain a little bit of that mouthfeel,” says Dillon. He selects botanicals grown at the distillery and nearby that bring forward floral elements, such as lavender and hibiscus, while softening the juniper. Lemon verbena adds a subtly citrusy, herbal wintergreen note to the finish. Gin 22 is a carefully designed contemporary gin that appeals to seasoned gin lovers without scaring away people new to the category. It was a smash hit from opening day and continues as the distillery’s best seller.

Moray Tawse founded the Tawse Winery in 2005, seven auspicious minutes down the road from Dillon’s. Here, winemaker Paul Pender follows a winemaking tradition based on organic farming, under the motto that ‘wine begins in the vineyard’. In 2018, the winery added a still to make pomace brandy, but in Canada, grape spirits are a niche category and don’t sell well enough to pay for the still, so Pender turned to gin. He enjoys that gin shares a common philosophical and creative ethos with wine. “We wanted to create a gin where all of the botanicals were together as one – instead of one dominant botanical,” he explains. “That is how we make wine. We believe that balance and elegance allow the terroir in our wine to shine. With gin, our botanicals work in synergy.”

Tawse’s small-batch approach makes it uneconomical to incorporate grape spirits into its gin. Instead, Pender turns to neutral corn spirits, creating a playful gin with citrus and floral notes, discreet juniper tones, coriander, mellow chamomile, and lemongrass. It’s a stylised contrast to The Falls that roar just 30 minutes away.

More than six million cubic feet of water go over the Horseshoe Falls every minute during peak summer hours. If water were fruit, that’s the kind of volume that would keep Arnie Lepp up at night. His family has been growing fruit in Niagara for four generations. It’s an industry that generates 3,050 tonnes of waste across the region annually, so Lepp founded Spirit In Niagara Distillery to solve his disposal problem. Now, distiller Joshua Beach converts waste fruit into spirits, including a gin that captures the spirit of Niagara to its very core.

“There is so much surplus,” says Beach. “It’s not just the fallen fruit and ugly ducklings. There’s a lot of pristine, premium fruit at its optimal ripeness. These bins of fruit roll up behind the distillery and they’re beautiful, dripping with juice. Some mornings, I come out and there are bins of fruit, and my breakfast is 12 nectarines.” Beach ferments the fruit and distils it into spirit, including the base for the distillery’s Juiced Up Gin.

Beach began developing gin recipes years ago as a partner at Vancouver’s Odd Society Spirits. There, he discovered he was staring at a blank canvas, tailoring botanical flavours to a neutral gin base. With a Niagara fruit base, a little bit of extra flavour shines through, so he increases the botanical load to balance the fruit spirit. “Working with a distillate with lots of character poses many problems. You have to include it and work with it as its own flavour profile. What I like about it is that the viscosity carries through to the gin with this great textured mouthfeel, which I think is super valuable,” explains Beach.

He keeps the botanicals simple, focusing on the source of his ingredients. “I find that Canadian coriander is spicy and citrusy compared to coriander from warmer climates,” he says. “I equate it to rye. Rye is more delicious the more north you go, because it struggles to grow. It’s a little less plump [of a] grain, so you get the husk and the flavour. In my mind, it’s the same thing for the coriander.” Lemon, orange and grains of paradise top off the gin along with other botanicals. It’s simple without sacrificing complexity, while highlighting daring notes of juniper and coriander.

Patch’s words, “Some things can be done as well as others,” weren’t referring to gin, but they ring true. The Chicago Tribune loved how Patch’s phrase evoked a “sense of human possibility, suggesting that things not dreamed of might yet be accomplished, and affirming that great skill inheres in many sorts of endeavours.” As impressive as Niagara Falls may be, when you step away, it is clear the risks and aspirations that led Patch and his ilk to risk death for fame have also given us gins that capture a dream come true. Is Niagara gin death-defying? It’s certainly breathtaking. And, beginning with Dillon’s Gin 22, Niagara’s go-for-broke distilleries have made their splash in brimming glasses. Today, these distillers are well prepared to tell crowds of daredevils seeking terroir, not terror, that you don’t need to hold your breath to take a sip.