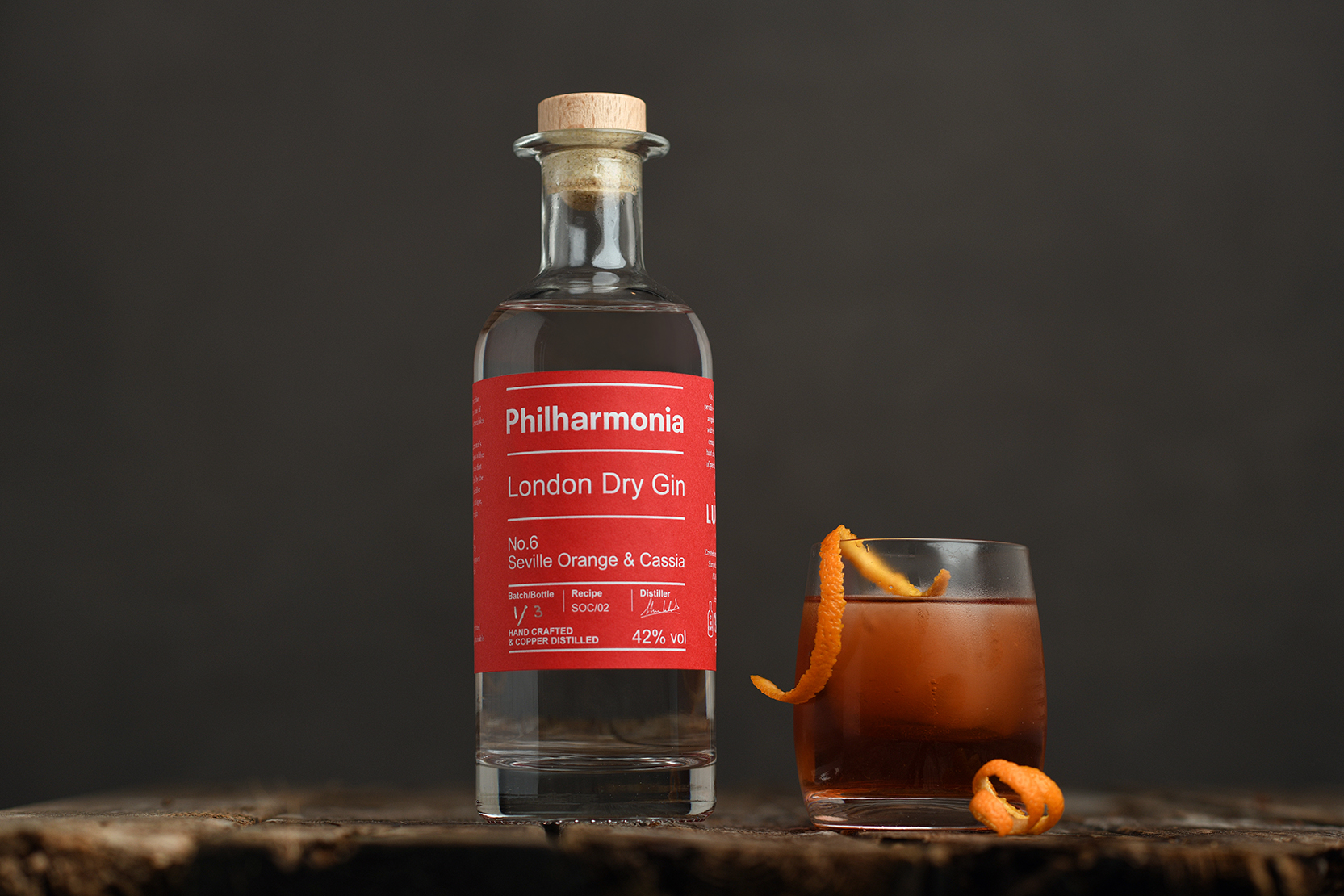 Exploring the varied, long-standing and deep-rooted relationship between gin and music

Gin and music go hand in hand in all sorts of formats. A spirit of such evocative power was, of course, going to be immortalised in sounds spanning a huge emotional range, from the depths of despair to the heights of elation. Whether dancing on the tables or propping up the bar, gin has been referenced in all sorts of musical scenarios, and these gin-music links have been realised in various ways.

Having recently been bombarded with celebrity-spirit collaborations, I decided to investigate, and have uncovered all sorts of wonderful links, be it collaborations, gins that have been infused with music, or traditions of drinking gin with certain songs. Our contributing editor David T. Smith, for one, always keeps the makings of a G&T in the fridge to whip one up should Billy Joel’s ‘Piano Man’ come on the radio; the drink must be completed and sipped before the end of the fourth line, “Makin’ love to his tonic and gin”.

Of course, there is the music itself. I put the question out there to some of my fellow ginners and the response was extraordinary. I had no idea how many songs related to gin there are, and I’ve put a few of them onto a Spotify playlist for you to enjoy (huge thanks to the Gin Genies for your input, in particular Keli Rivers). Seek the playlist out now, fix yourself a drink, and let’s take a closer look at the wonderful combination of gin and music.

Associations between celebrities and spirits go back many years – Woody Allen was promoting vodka as far back as 1966. In some instances, celebrities are more involved than simple promotion; we saw this with Ryan Reynolds’ extremely successful investment in Aviation Gin, which made him co-owner and creative director, generating stylish and chortle-worthy adverts for the brand. Such successes have made the drinks industry a lucrative business for singers and actors alike, and all manner of products are being launched, such as Mariah Carey’s Irish cream liqueur, Black Irish.

When it comes to gin, there is certainly big love from the arena of rap. Snoop Dogg’s ‘Gin and Juice’ is one of the first that comes to mind. And, like man’s best friend, Snoop has remained loyal to gin: he broke (and still holds) the Guinness World Record for largest gin and juice ever made, which he concocted on stage during a show, and has also been a brand ambassador for Tanqueray 10. He’s now launched his own gin, Indoggo, which has been warmly received in the US.

As well as celebrity endorsement, there are collaborations where a distillery works with a client to produce a concept gin or one bearing a certain label. It could be something as simple as Kiss Cold Gin, produced by Brands for Fans: the label is beautifully striking and the gin has all the punch you would expect from the band who wrote the lyrics, “It’s cold gin time again, you know it’ll always win.”

In 2020, Wardington’s Original Ludlow Gin partnered with the Philharmonia Orchestra to produce a limited-edition London dry, Philharmonia Gin, with a proportion of proceeds going towards the orchestra. This was a great help in supporting online performances and reduced ticket sales during the early stages of the Covid-19 pandemic. Ludlow took inspiration from the Philharmonia’s London home and the imported fruits and spices that pass through the city’s docklands, such as bitter oranges from Seville and cassia bark from the Far East. On the Philharmonia website, Shaun Ward of Ludlow Gin has stated that, “Creating a gin is much like the work of conducting an orchestra, allowing certain colours and textures to sing out to create the perfect ensemble. We look forward to a successful partnership with the orchestra and hope audiences enjoy the fruit of our labours.”

Another notable collaboration project is Manchester Gin’s FAC51 Haçienda. For this, Manchester Gin teamed up with bassist Peter Hook, founder of Joy Division and New Order and co-owner of legendary Manchester venue the Haçienda Club, which became a home for the musical transition from punk to new wave to rave. This happened both via the venue and via Factory Records, which gave a platform to the bands that changed the face of music in Manchester, sending a ripple around the world. The vibrancy of this time is captured in the zestiness of lemon and lime peel in the FAC51 Haçienda, and the bottle is styled with the Haçienda’s bold yellow and black stripes, which are distorted through the liquid – a cheeky nod to the legendary raves and debaucherous all-nighters of that incredible era.

The next step is musicians making gin. The Gentleman Distillers, based in Lincoln, has been going since 2019. On its site, the distillery proudly states, “All of us at the Gentlemen Distillers Ltd are or have been musicians playing in brass bands and concert bands, or are strong supporters of community music initiatives.” The first gin the team launched was Bandsman British Gin, and they have since launched three others, as well as making charity gins to raise money for good causes. The first of these is Kneller Hall 1857 London Dry Gin, a homage to the home of the Military School of Music since 1857 and the Royal Corps from 1994 until its closure this year. The release is a limited run of 328 bottles: two for each year, with a year being inscribed on two bottles. Money from each bottle will go to the Army Musicians Association and the Royal Corps of Army Music Trust.

Now things get really interesting, with gins that are being ‘infused’ with music. Back in July 2015, New Zealand distiller Rogue Society distributed a limited run of what it claimed was the “world’s first music-infused gin”. The Electric Wire Hustle X Rogue Society Gin was distilled with an EP from native band Electric Wire Hustle, called Aeons, played on repeat. The idea was inspired by Japanese researcher Masaru Emoto, whose work suggests that the energies and vibrations of music can change the structure of water. Each bottle came with a free download of the EP.

This idea is not limited to gin: winemakers have been playing music to barrels – the thinking is that the vibrations help coax out more flavour – and California’s Spirit Works Distillery has been doing this with whisky barrels. It also worked with independent bottler That Boutique-y Gin Company to create Crème de Juniper. Juniper berries were distilled with a red winter wheat-based spirit before the distillate was sweetened and allowed to rest in ex-wheat whiskey casks, resulting in a creamy, delicate and sweet liquid. Lastly, according to my sources, music was played to the gin as it rested in the whisky casks, which had themselves already been ‘infused’ with music. I wonder what was played?

Now, from infusing to sharing. Long gone are the days when you would spend an entire evening making a tape for a friend or a crush, losing hours decorating the inner sleeve with the track list and various doodles. Technology has moved forward; we are now in the era of streaming and the playlist. Playlists may seem cold in comparison to handcrafted tapes, but they have certainly made sharing a lot easier, so much so that companies are jumping on the bandwagon and using them as an extra selling point. Defiance Spirit’s 1950 gin, for example, comes with a playlist inspired by the era. Gifting site Not On The High Street has gone further, selling bottles of gin that are personalised by year, ideal for birthdays or anniversaries, of which each come with a Spotify code linking the drinker to a playlist of songs from the relevant year. You can choose between sloe, raspberry, rhubarb and ginger, and spiced with sparkly golden flakes.

Continuing on the theme of playlists, I present our gift to you. I’ve been busy chatting to some of my favourite gin folks from around the world and have compiled a playlist of gin-related songs for you. An important disclaimer here: Gin Magazine cannot take any responsibility for the content of these songs or the artists who recorded them – they were selected purely on their juniper relevance – and there is adult language, and adult themes (but let’s be honest, what else would you expect from gin?). Believe me when I say that there are so many songs out there. This is just my curated collection, a first release for now, comprising all sorts of genres and eras that have been put together with care to immerse you in gin and music. I have noticed that nothing is done by halves here – songs are generally high or low, and “sin” seems to be the top word to rhyme with “gin”. Should we take something from that?

I say, if music be the food of love, let the drink be gin.

0 comments on “Gin and music: A harmonious partnership”