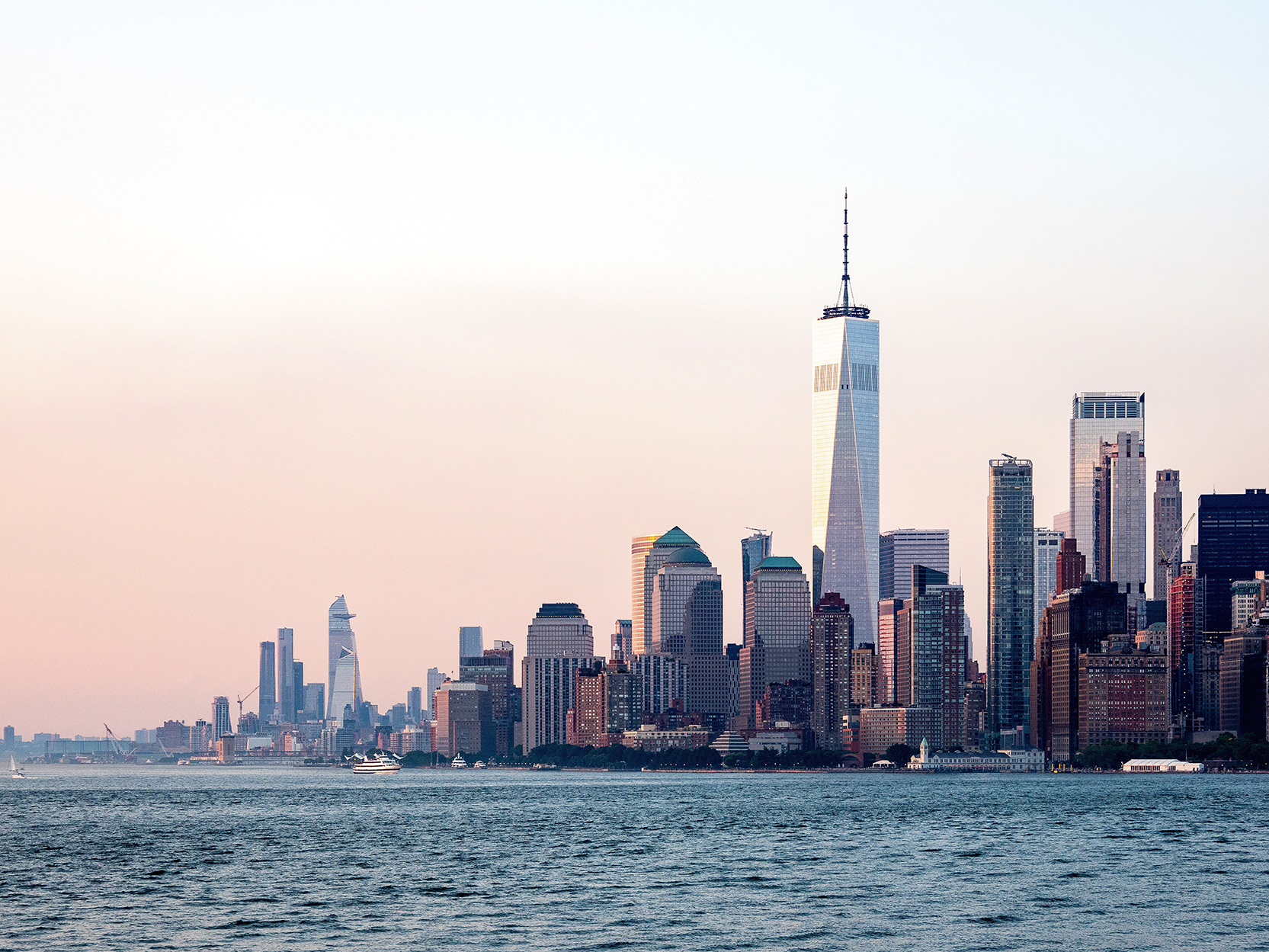 The juniper spirits of the Empire State

At first glance, it may seem that most of the gin distilled in New York State comes out of the New York City borough of Brooklyn. But, just as it is surprising how vast the forests are in this state, there are a surprising number of distilleries are operating in the Hudson Valley, the Finger Lakes Region and the distant cities of Rochester and Buffalo.

“I always thought of the character coming from the base spirit as an additional botanical to complement the other ones,” says Brad Estabrooke, founder of Breuckelen Distilling, makers of Glorious Gin.

The base spirit he uses is a wheat whiskey, distilled to a very clean, but not neutral, 90% ABV. “I thought that wheat spirit had such a lovely character, like honey and grass and almost spring flowers … It was a really nice way to add more flavour to the gin rather than being a complete blank canvas to start with.”

Estabrooke knew it would make an excellent flavour component, almost like an additional botanical, in what became the minimalist recipe for Glorious Gin, which includes rosemary, ginger, fresh lemon and grapefruit. Each botanical is distilled separately in the wheat spirit, allowing Estabrooke to focus on getting unique characteristics out of each before blending those flavours together in a multi-shot process.

Katz has been popular and influential during the rise of the modern cocktail era. He was certainly the best-dressed bartender at Tales of the Cocktail conference, and hosted The Cocktail Hour for Martha Stewart. However, he had to set aside his suits and put on Occupational Health and Safety Administation-compliant PPE for a while after starting a distillery.

NYDC makes gins with the craft cocktail community in mind, designed to bring out certain accents in classic drinks. The flagship is Dorothy Parker Gin, paying homage to this 20th-century firebrand known for her sarcastic wisecracking and the Algonquin Round Table. Dorothy Parker Round Table Reserve, meanwhile, is rested in sherry barrels that were used to age Lustau Vermouth; it brings into play subtle flavours that are complementary to many gin cocktails. Finally, Dorothy Parker Rose Petal Infused Gin includes crushed elderberries alongside its namesake flower.

About as far away from Brooklyn as you can get without leaving the state – a five-and-a-half-hour drive of 335 miles away, on the shores of Lake Ontario – is Rochester, home of Black Button Distilling.

Founder and president Jason Barrett named his distillery in homage to the button factory that his grandfather handed down to his mother. Barrett would have been prepared to make all these multi-coloured buttons, but he is colour-blind. He says, “The joke when I was a kid was that if I took over the factory, we’d only be able to make black buttons.”

“I think one of the reasons the Citrus Forward is so successful is this bright orange label, and it really pops on the shelf,” says Barrett. “The fact that it’s called Citrus-Forward Gin really gives you an idea of what it’s going to taste like, and then the taste really delivers.”

The Lilac Gin is a limited annual release in cooperation with the Rochester
Lilac Festival, the city’s traditional kick-off to summer. The distillery takes pre-orders for it in January and February. During April, staff pluck lilac petals with tweezers for hours on end. On the second Friday in May, it is released. “And when it’s gone, it’s gone,” says Barrett.

Among the approximately 20 other gins in Black Button’s warehouse are Pomegranate Gin, Autumn Harvest Gin, several barrel-reserve expressions, and the urban-foraged South Wedge Gin, named for the Rochester neighbourhood where supporting botanicals were harvested.

Even further from Brooklyn than Rochester – about a six-and-a-half-hour drive, 375 miles through forests, over mountains and past lakes – is Rochester’s Great Lake rival, Buffalo, near Niagara Falls, on the shores of Lake Erie.

Buffalo’s Lockhouse Distillery and Bar is a grain-to-bottle operation founded in 2012. Although it releases a coffee liqueur, an amaro and a vodka, Lockhouse has always been gin-centric. Rachel Glover, director of business development, says, “Our focus is gin, so our slogan is, ‘Drink more gin’.”

Lockhouse’s New York Style Gin features 17 botanicals, including cardamom, balsam fir and marshmallow root. This contemporary gin is the starting point for the barrel-rested gin, the latest release of which languished for four years and 42 days in barrel, bringing it much closer to crossing over into the whiskey category than other barrel-aged gins. Ginnamon leans toward cold-weather drinks like spiced cider and hot toddies.

As Rochester celebrates lilacs, Buffalo kicks off summer with a Cherry Blossom Festival. Lockhouse’s Sakura is made in the spring and only available from April to July. The floral-forward gin is excellent in a French 75 or combined with grapefruit.

This story ends where it began: with genever-style gin, this time from Stoutridge Vineyards in the Hudson Valley. Founder and distiller Stephen Osborn lives like Bruce Wayne in his Batcave, surrounded by tools with which to practise his calling. Osborn incorporates many techniques – some folk, some scientific, some experimental – in what he describes as “transcendental distillation”.

Stoutridge comprises a vineyard, a natural winery, a malthouse and a distillery, which features six stills, all with their own nuances. Osborn runs three Carl stills, one with a 30-plate column for making neutral spirits. One was made by Specific Mechanical. Another was hand-pounded by whiskey icon Chip Tate and is fired not by steam or flame, but by infrared. Another still, partly built by the local Quercus Cooperage, was designed with tin and wood, because the materials are less reactive with botanicals.

Stoutridge Vineyards makes three dry gins, each distinct. The first gin, Gin 0, aims straight at London dry with a juniper-coriander one-two punch. Osborn describes it as “my only normal gin”.

Gin 1 is a deep extraction of fresh bitter orange, peeled directly into rye whiskey. The peels sit for two months, then the liquid ages for two years in a barrel and is mingled, almost solera-style, in a 600-litre Cognac cask with more of the same. The aged whiskey is distilled with grape spirit, juniper and lavender. “I was hoping people would not like it, because it is a lot of work,” says Osborn. “Of course, it’s our best seller.”

Osborn also makes six genever-style gins, approaching them as though making whiskeys flavoured with spices. Gen X Gin, available both clear and barrel-aged, features gentian and juniper added directly to a 50-50 rye-corn mash for infusing before fermentation and distillation.

While Gen X Gin is reminiscent of a Belgian flavour profile, for Gen Z Gin, Osborn jumped across the Baltic to Sweden for inspiration. Taking the spirit part-way from oude genever to aquavit, he added caraway to the fennel and juniper, finishing it in ex-rye whiskey barrels.

Gen Rye Gin uses a rye-based spirit with native New York botanicals of iris flower root and sumac – which Osborn enthusiastically describes as a “blazing citrus sword of truth” – and is finished in Pinot Noir barrels.

With these three spirits, Stoutridge scooped Best of Category Genever at the American Distilling Institute’s Judging of Craft Spirits in 2018, 2019 and 2020.

And those aren’t even Stoutridge’s latest genevers. Osborn added Artemisia absinthium (wormwood) to a wort of barley with gin botanicals, allowing a natural fermentation in open-top wood tanks in the biome of Stoutridge’s natural winery. The wash was double-distilled, like a single malt whiskey, and aged in a rye whiskey barrel for a year. Made from malted barley, this Genever D’Artemis is the closest in process to a traditional genever.

The latest gin from Stoutridge, West Wind American Genever, combines galangal root with gin botanicals and is rested in ex-Bourbon barrels, which took a trip to Scotland to age Laphroaig and found their way back stateside. Osborn calls it “a Scotch lover’s gin”.