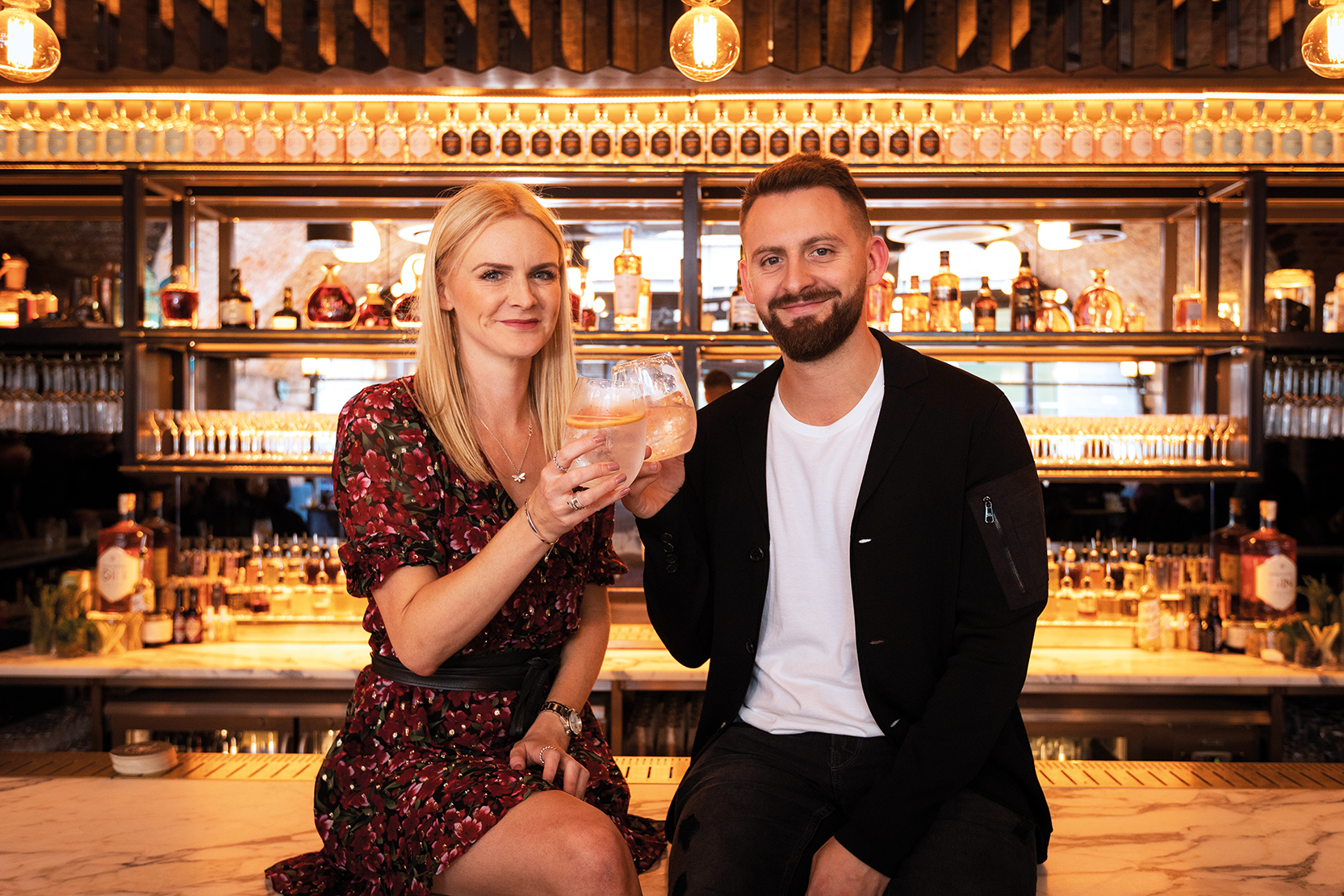 I’m sitting at a booth in a tastefully decorated, atmospherically lit bar near Deansgate station in Manchester, waiting for my interviewee, Seb Heeley. It’s a few minutes before the Manchester Gin co-founder bounces into view and warmly shakes my hand. He’s just about to take a seat when his fiancée and co-founder, Jen Wiggins, emerges from the direction of the still room and asks if she’ll be collecting their son from nursery that evening. Seb replies in the affirmative. They embrace and exchange an “I love you” before Jen waves a cheery goodbye at us and exits through the bar’s tall glass doors. Seb turns back to me, all smiles and Mancunian charm, then takes his seat at the end of the table.

This interlude seems a fitting start to our meeting, as it is Seb and Jen’s love – both for each other, and for making great gin – that is at the heart of the Manchester Gin story. Their romance is so integral, in fact, that its beginning is a commonly relayed part of the brand backstory. Seb tells it with the tint of self-deprecating humour and mellowed affection that accompanies many stories of lovers’ first meetings: they were in a notorious Manchester tiki bar at around 1.30am on a Wednesday morning  back in 2013 when Seb approached Jen and asked her if he could get her a drink. She replied, “I’ll have a gin and tonic.”

They knew early on that they wanted to be partners in business as well as in life, and their mutual love of a good drink enticed them towards the bar trade. Several of their early dates took place at Manchester’s Atlas bar, which at the time had one of the biggest gin selections in the country, with more than 250 bottles on the shelves. Seb and Jen spent hours working their way through the collection, making their own tasting notes on a bar menu (which has been put on display in the distillery). They began to think that, perhaps, they didn’t want to open a bar after all. Perhaps they wanted to make gin instead.

Seb recounts their early forays, “One night at home, we tasted 26 of the world’s best premium gins, laid out in our galley kitchen. We narrowed them down to 12, then tasted them with tonic. By the following morning, we had three gins.” Those left (including Monkey 47, Jen’s favourite at the time) were all of a style that would be considered contemporary. This style suited the couple’s desire to put “a real taste of Manchester” into their gin, which they achieved by adding dandelion and burdock as botanicals – plants which grow along Manchester’s waterways, and which are combined to make one of northern England’s most popular soft drinks.

Recipe development for their flagship Signature Gin took around four months. “We were fortunate that it was something we loved, but that it was also something that other people liked,” Seb says.

Seb’s mention of Michelin stars prompts him to mention a recent collaboration between the distillery and city restaurant Mana – the first to be awarded a coveted star in Manchester in 30 years. Together with Mana’s chef-owner Simon Martin, Manchester Gin has created Mother of Pearl, which contains a distillate made from used oyster shells donated by the restaurant. Seb laughs ruefully as he recalls the lengthy trial-and-error process of discovering just how many kilos of oyster shells it takes to make a palatable distillate.

When Seb and Jen launched Manchester Signature Gin in May 2016, they were both still working full-time, Jen in marketing and Seb for a property development firm. Eventually Jen left her job to focus on the new venture, but Seb explains that, even after this shift, all their hours with the new business were spent making gin rather than selling it. So, they did what any dedicated entrepreneurs would do: spent four days a week working through the day and distilling through the night, and the other three days travelling to events around the UK to sell their spirits. They did this for not one, not two, but 15 months (Seb jokes that getting up three times a night to check on the still turned out to be good preparation for becoming parents).

During this period, distillation took place in their dining room on two 60-litre stills named Wendy, after Jen’s mum, and Victoria. Jen and Seb bottled and signed each batch by hand (however, you won’t find either of their names on the bottles – Seb signed his batches with ‘Big P’ and Jen with ‘Lil P’, a throwback to the latter’s pet names for herself and her fiancé). Using this system, they were able to churn out 25,000 bottles of gin in 15 months.

Distillation has come a long way from this at-home set-up: they now have the capacity to make one million bottles of gin annually, and had reached 120,000 before the pandemic, a level to which they have almost returned.

Their current main still, Wonder Wen, is a custom-built 1000-litre machine from China. It’s styled on a Holstein, but with such a minute level of technological control that it makes most ‘smart’ devices look as advanced as a horse and cart. Seb enthusiastically flicks through the interface, explaining that the whole system can be remotely controlled and that it employs machine learning techniques to improve consistency. The gin comes off the still at 80% ABV and is distilled down to bottling strength over four days, in four separate dilutions.

Their old distilling workhorses, Wendy, Victoria and Emmeline, are still on show in the distillery. Wendy and Victoria are in active service for new product development, but Emmeline was retired after receiving a ding (on our tour later, our guide Stephen explains that any change in the smooth exterior of a still can knock out precise distillation calculations).

Manchester Gin moved into its current home – what is now the Spirit of Manchester Distillery and bar Three Little Words – in September 2019. It took four months to get planning permission for the £1.5 million renovation, which has been minimalistic and sympathetic, allowing the character of the railway arches location to shine through (while this could be down to the building’s Grade 2*-listed status, it’s probably also down to Jen and Seb’s good taste). It is the second railway arch premises they have operated in – their first was in nearby brewery hotspot Temperance Street.

While the new site has significantly increased product storage capacity, the greater priority was to expand Manchester Gin’s visitor experience. The latest phase of renovation is a dedicated tasting room, which is accessed through the distillery and adjacent to a room lined with pilot stills where visitors can make their own gin. Seb and Jen hope this new space will take their visitor experience up a notch (not that it needs much more to improve: Trip Advisor users have ranked the distillery as the city’s number one visitor attraction, and it was also named Visitor Attraction of the Year in the 2021 Icons of Gin awards).

When we visit the distillery, the new tasting room is just days away from opening, so our tour – which includes a talk and gin tasting – takes place in the compact distillery. Tables laid for two are nestled snugly around the stills and along the glass wall opposite them. Our enthusiastic and knowledgeable host, Stephen, stands beside Wonder Wen, pivoting left and right to ensure he takes in the full L-shaped arrangement of tables as he talks. The tasting takes us through five gins: the Signature, the more herbaceous and savoury Wild Spirit, the navy-strength Overboard, the Raspberry Infused, and the special-edition Haçienda (released in 2020 and named after the infamous Manchester nightclub). There is also a bonus tasting of the Mother of Pearl, not officially scheduled for release until the following day, which proves to be a crowd-splitter.

As well as they are doing with gin, Seb and Jen’s ambitions do not stop there. They released a vodka, Manchester Spirit, in 2020 and a spiced rum, One-Eyed Rebel, earlier this year (they currently buy in the spirit to make this, but plan to start distilling their own from imported sugarcane).

The couple also have big plans for Three Little Words. In a matter-of-fact way, Seb states their ambition to make it one of the best cocktail bars not just in England, but in the world.

Rather than being a “starters, mains and desserts place”, the dining at Three Little Words is designed around a meal Seb and Jen came to love as a couple: pre-dinner. Seb explains that this generally involves going out in the later afternoon or early evening, having a few drinks and getting a few small plates to snack on while you drink. The European feel of this concept is reflected in the menu of enticing tapas-style dishes, and, in a nod to American cocktail bar culture, food is served until 12am.

The bar’s cocktail menu, titled ‘The Colour of Love’, is a triumph. Its inventive drinks are grouped by emotions, depending (I suppose) on just how desirous you’re feeling of a gin cocktail on your visit. Try the Careless Whisper with Haçienda Gin, Chartreuse, Calvados and melon, the Don’t Speak! with Wild Spirit, fino sherry, cherry and tarragon, or the infused Raspberry Gin-based Just One Kiss with white wine and hibiscus.

As passionate and engaging as he is, there is also a measured quality to Seb’s voice that shows how invested he and Jen are, and how seriously they take their business. “We intend to build a fully immersive ‘drink, dine and distil’ experience for the gin, with Spirit of Manchester [Distillery] and Three Little Words,” he says. With such a strong product, concept and leaders, Manchester Gin is ideally positioned to achieve this goal.

0 comments on “Manchester Gin: Sharing the love of good spirits”