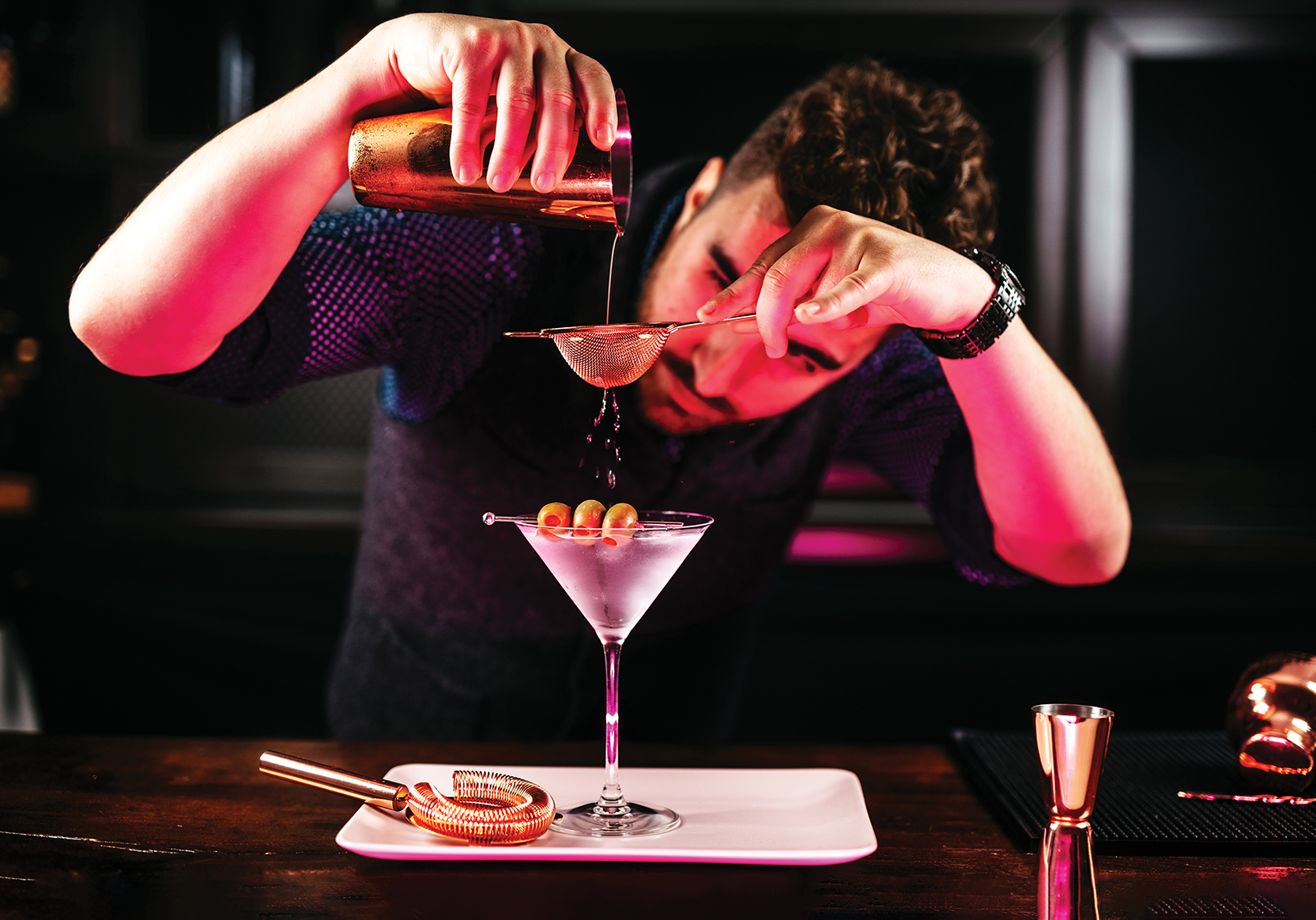 From herbs and mushrooms to meat, there is a whole world of savoury flavours to explore in your gin drinks

Savoury, the character in question for this edition of our ongoing series on the flavour profiles of gin, has only really been prominent during the 21st century and in the last 10 years in particular. Not to be confused with savory, the rosemary-related herb that is sometimes used as a botanical in its own right, here I am talking chiefly about the unsweetened side of spiced flavour profiles, as well as a more vegetal character.

One of the earliest savoury gins was Gin Mare, which was launched in Spain in 2010. Both Hendrick’s and Martin Miller’s use cucumber in their gins and, while they predate Gin Mare, their character is not, on balance, savoury. Bombay Sapphire, which does include two types of pepper in this botanical mix, was launched in 1986.

Savoury is often linked to the fifth type of taste, “umami”, and some gins have embraced this directly. “Oo-mami-gin” from That Boutique-y Gin Company is made using botanicals such as tomato, soy sauce and Tasmanian pepperberry. The taste is fresh, yet salty and decidedly savoury, perfectly evoking the sense of umami. Gins focused around umami are also made by Audemus (of Pink Pepper Gin fame) and Corner Three Fifty, which uses butternut squash and shiitake mushrooms.

When mixing savoury gins, it is important to consider the balance of sweetness in both other ingredients and garnishes. For example, lemon goes well with leafy notes such as cucumber, whereas lime is a good partner for peppery notes, and orange complements richer spices such as cumin and turmeric.

Savoury mixers are not especially common, but they do exist. Cucumber-flavoured tonic is probably the most prevalent, with varieties being made by Fever-Tree, Schweppes 1783, Skinny, Luscombe, Bermondsey, Lamb & Watt and Walter Gregory. Double Dutch makes a Cucumber & Watermelon gin mixer, which adds a fruity succulence to any drink. Dash and Mr Qcumber also produce cucumber-flavoured seltzers/sparkling waters, for those who prefer less sugar.

Cucumber mixers can sometimes provide a challenge when mixing, as they have quite a prominent flavour. If in doubt, I’d suggest leaning a little heavier toward the mixer – giving it space to be the primary flavour – adding plenty of ice and garnishing with bright, zesty lemon.

For a still alternative, the health spa favourite, cucumber water, is easy to make. Infuse slices or peels of cucumber in cold water for 20 minutes. A ratio of one part gin to three parts water creates an exceptionally refreshing drink with a soft succulence that works well with almost any dry gin. For additional complexity, you can add a splash (about half the amount of gin) of your favourite vermouth.

Beyond cucumber, two other savoury tonics are made by Walter Gregory: Neeps (aka swede or rutabaga), which was released for Burns Night; and Peapod, which was released this summer. The Neeps Tonic is very true to flavour and works well with a range of gins, in particular those with vegetal, peppery or smoked flavours. Le Tribute of Spain also makes an exceptional olive lemonade, which is as brilliant on its own as it is as a mixer.

Finally, you could also consider mixing with vegetable juices such as beetroot, carrot, and, of course, tomato. At one time, Lidl released an unfortunately short-lived tomato-flavoured tonic that was unusual, but, in my opinion, exquisite.

Savoury garnishes can really help to add a refreshing element to drinks, bringing great aromas and stunningly bright colours. Cucumber is a relatively common choice and has been phenomenally promoted by Hendrick’s, although Seagram’s Gin advertised a Gin & Tonic garnished with cucumber in the New Yorker in July 1970.

Bell or sweet peppers are a particular favourite of mine. They add a lovely fragrance, come in a variety of vibrant shades, and provide a pleasant little snack to munch on. They can be served as batons or slices/rings – just make sure to remove the seeds first. My favourite serve using peppers appeared in the book Gin Tonica: “The Olympian” is a Spanish-style Gin & Tonic garnished with rings of red, yellow and green peppers.

Cracked peppercorns also provide great aroma and a little bite – although be careful that the pieces don’t get stuck in between your teeth! Black peppercorns in particular offer a gentle heat along with a pleasant dryness that works especially well with strawberry flavours.

The most common savoury gin cocktail is the Red Snapper (sometimes known as the Bloody Margaret); this is essentially a gin-based variation on a Bloody Mary (vodka and tomato juice) that dates from the 1940s.

People are often turned off by tomato juice. If you are not typically a fan, but would like to try a Red Snapper, my suggestion would be to try it without seasoning.

Add the ingredients to a glass with ice and season.

Seasoning is personal. I like plenty of pepper and Lea & Perrins Worcester Sauce, but I know others like a wedge of citrus, celery salt and stalks, olives, olive oil, tomatoes, samphire, or even cooked bacon. For a longer, lighter version, try mixing 50ml dry gin, 25ml tomato juice and 150ml tonic or sparkling water.

The other flagship savoury gin cocktail is the Dirty Martini: the classic mixture of gin and vermouth with the addition of olive brine – a double-down for those who like olives to garnish their Martini.

It was thought to have been invented in 1901 in New York by John E. O’Connor, who is recorded as having served a Martini after having muddled an olive in the mixing vessel beforehand. Later, olive brine was added. The Martinis of the time were not as dry as today, with many being equal parts gin and vermouth.

Stir the ingredients and fine strain into a chilled cocktail glass.

A modern interpretation inspired by the apocryphal story of a 70s rock ‘n’ roll star ordering a Dirty Martini in a hotel bar who, when asked how dirty they would like it, replied “FILTHY!”.

Shake vigorously, strain into a chilled glass, and garnish with three olives.

This really dials the dirty up to 11; the shaking helps to emulsify the oils in the olives, producing a drink that is crisp, yet oily, a little saline and oh! so savoury.

Conker Gin has recently released a pre-bottled Clean (Dirty) Martini that uses a combination of its Dry Gin and dry vermouth that is then washed in Two Fields Extra Virgin Olive Oil. The result is a drink with an incredibly velvety and luxurious texture, and a gentle, fruity spiciness from the vermouth and oil. It is something genuinely innovative and well worth trying.

For those who would like a more savoury White Negroni, I can recommend using a 50/50 mix of Suze and Sollasa, a new herbal aperitif inspired by Indian cuisine, as your bitters component along with dry vermouth and a savoury spiced gin such as Opihr or Cotswolds Baharat.

The world of savoury flavours is one that is exciting and relatively easy to explore; they go superbly well with food, but that’s another article!

0 comments on “Your guide to savoury gins, mixers and cocktails”