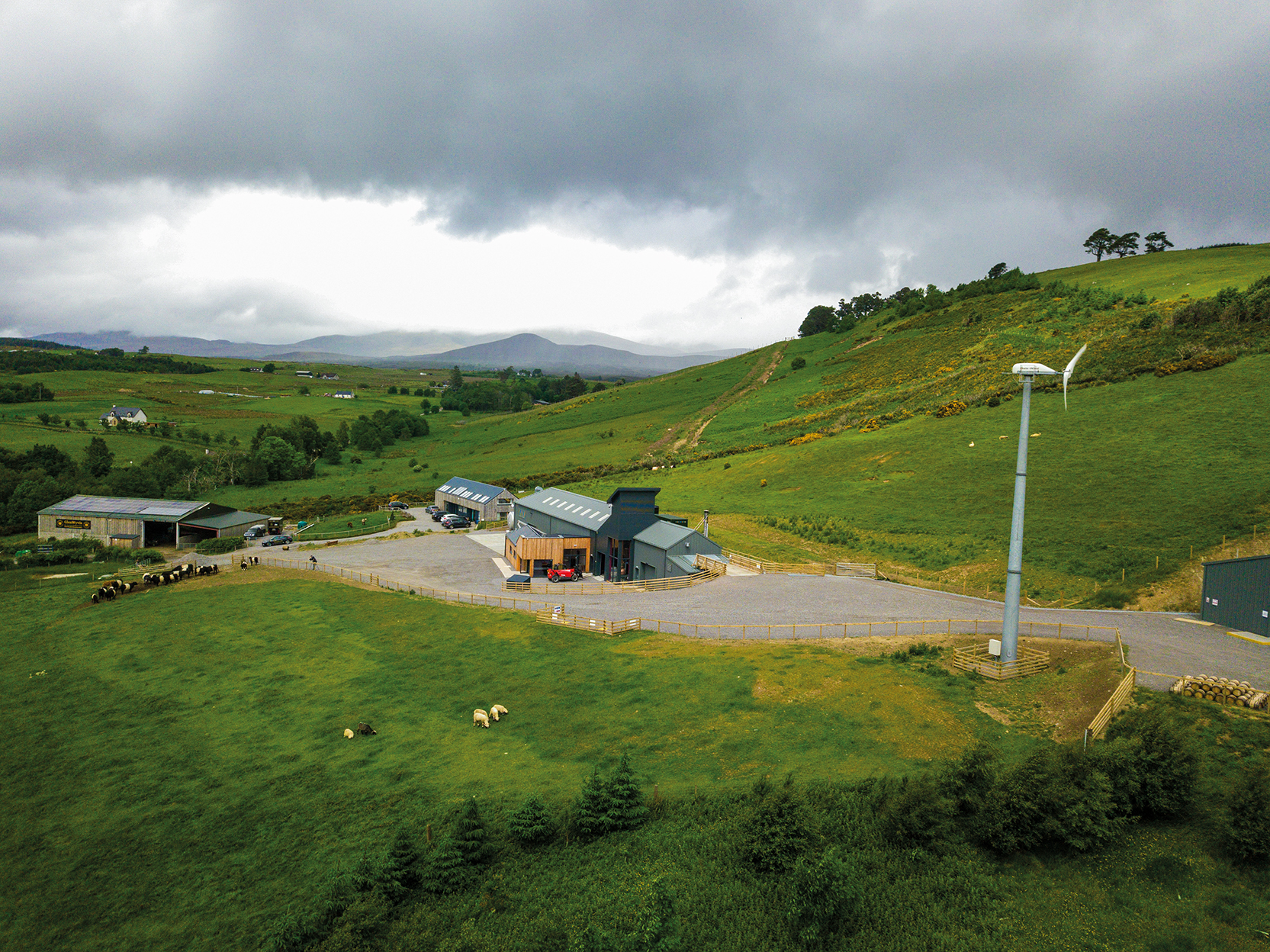 The spirits industry has a tendency to romanticise, if not outright fetishise, traditional distillation in copper pot stills. An inherently energy-heavy process, with high temperature required at its heart, the use of gas-fired alembic stills is both inefficient and incredibly carbon intensive: The Beverage Industry Environmental Roundtable’s Research on the Carbon Footprint of Spirits (2012) estimates that emissions from energy use for pot distillation account for approximately 40 per cent of the carbon footprint of a bottle of spirit.

Reducing energy use and dependence on fossil fuels is, therefore, both the economic and responsible thing to do. Not only will environmentally aware consumers demand such change, but a comprehensive sustainability plan can help attract capital investment. Furthermore, with a growing global commitment to reach net zero by 2050, increasingly stringent industry regulations – including mandatory carbon reporting – are expected within 10 years.

The difficulty of decarbonising distilleries is not to be underestimated, with challenges including their often-remote locations, uneven demand profiles and high energy density requirements. Last year the UK government announced £10 million of research and development funding to support the development of fuel-switching technologies, with the aim of cutting CO2 emissions by one million tonnes. One innovative solution, as explored by Arbikie Distillery in partnership with Locogen and Logan Energy, looks to use green hydrogen as a primary process fuel. Produced via electrolysis using renewable electricity, the production of zero-carbon green hydrogen creates only heat and water as by-products. With the additional benefit of being compatible with many existing boilers in operational distilleries, green hydrogen could work particularly well for larger operations with minimal disruption. However, as with all new technologies, there are barriers to wide-scale and immediate adoption, including safety concerns (hydrogen is extremely flammable) and prohibitively high costs.

Biofuels – produced directly or indirectly from organic material – offer a more immediate alternative to fossil fuels. Though both processes emit CO2, the combustion of fossil fuels releases carbon that has been locked up in the ground for millions of years, whereas burning renewable biomass only returns to the atmosphere carbon absorbed during the plant’s life. Silent Pool uses both locally sourced hardwood to fire ‘The Major’ – a repurposed heritage steam boiler – to power its 350-litre still, and hydrogenated vegetable oil (HVO) – a sustainable diesel made by refining 100 per cent renewable inedible waste or residue food stock – to power the boiler for its 1,800-litre still.

Integral to Eden Mill’s new climate positive distillery, due to open in 2022, is its location within the University of St Andrew’s Eden Campus, enabling it to power and heat the stills using the university’s adjacent biomass plant. Not only will leftover water be returned to the plant to be reused, but carbon dioxide will also be captured for academic and commercial research use at the university’s chemistry department. At £10 million such ventures don’t come cheap, though. Furthermore, sustainable fuel supplies can be a limiting factor in the feasibility of using biofuels, particularly on a large scale, and burning biomass can still negatively impact air quality.

The best power source for many distilleries, particularly small- and medium-sized ones, is 100 per cent renewable electricity. With electricity usually two to four times more expensive than gas, it makes both environmental and economic sense to also, first, reduce energy consumption. Arguably one of the easiest ways to achieve this is to make multi-shot rather than single-shot spirits. Essentially a concentrate that is diluted down with neutral grain spirit as well as water, multi-shot produces more gin in less time, using significantly less energy. Of course, the design of the still matters too, with modern stills offering greater efficiency than traditional uninsulated alembic stills, particularly reducing the time and energy required to heat up prior to operation. Some, such as those used at Bottomley Distillers, also feature a control panel with a self-learning algorithm to help further reduce both water and energy usage.

Founded in 2020, sustainability is at the heart of North Point Distillery’s operations. Having invested in a bespoke 500-litre direct-electric still (the largest available), the team not only changed its wiring to enable it to heat up faster without using more electricity, but also always run it on the fewest number of elements, and hence least power, possible. And, located near Thurso – the northernmost town on the British mainland – that power comes from the UK’s strongest source of renewable energy captured onsite at Forss Wind Farm.

In Western Scotland, Beinn an Tuirc Distillers relies instead on what it calls “Scotland’s most predictable resource”: rain. Having introduced a number of sustainable systems when it took over the family estate in 2013, it was the standalone hydro-electric scheme which inspired, and also part-funded, the launch of the gin distillery in 2016. Taking full advantage of its location –
Beinn an Tuirc is the highest point in Kintyre – the distillery diverts water down a 1km intake pipe in a burn (a small river) towards a 99kW turbine where it is converted into electricity before the water is released back into the burn, causing very little environmental impact. With the distillery’s 220-litre copper pot still, and offices, connected directly to the hydro-electric power it saves approximately 10,100kg of carbon dioxide per annum. Better yet, as the distillery only demands around 10 per cent of all energy produced, it also exports a further 360,000 kWh to the national grid, saving a further 90 tonnes of carbon dioxide.

Hydro-electricity is, of course, not limited to rainfall. Marine energy company Nova Innovation has been awarded seabed rights for its 3MW ‘Òran na Mara’ project – Gaelic for ‘song of the sea’ – to install a series of underwater turbines between the isles of Islay and Jura in Scotland’s Inner Hebrides to create renewable power generated by the tide. Despite the project still being at an early stage, Nova Innovation says it could be generating power to local distilleries as soon as 2022.

One of the UK’s fastest-growing energy technologies, and an increasingly common site on rooftops, is solar panels. While any onsite generation reduces reliance on the grid, and nullifies the average 8.55 per cent electricity losses that occur during transmission and distribution, solar panels are rarely installed in large enough arrays to power the entire distillation process. Entirely powered by green energy, Scotland’s community-owned GlenWyvis Distillery uses a 46kW solar array alongside a 12kW hydro dam, a 12kW wind turbine and a 550kW biomass boiler which provides steam to heat the stills. The impressive set-up provides a reliable power supply over which it has complete control. Distillery operator Craig MacRitchie says, “The only time we are not producing our own electricity is when it’s dark, dry and no wind – and that’s very rare!”

However, when it comes to modern, efficient distillation using renewable electricity, the hands-down winner has to be vacuum distillation. Pioneered by London’s Sacred Spirits in 2009, vacuum distillation lowers the air pressure, and consequently the boiling point of the liquid, in the still. With the vacuum still running on a 100 per cent green energy tariff at about room temperature, Sacred uses less than 10 per cent of the energy of a traditional distillery. Though vacuum distillation offers increased efficiency – it is often quicker with no need to take head or tail cuts – the restriction on the size of the still also, by its very nature, limits production capacity.

Clearly vacuum distillation isn’t for everyone, but it can certainly play a role in larger distilleries such as Hepple Spirits, founded in 2015. Hepple combines vacuum distillation with supercritical extraction and traditional distillation to capture the best of each botanical. Its 340-litre copper pot still is – like Silent Pool’s – powered by HVO, while its 12-litre vacuum still currently uses 100 per cent green electricity to power a water bath and refrigeration unit that Chris Garden, head distiller, estimates generate 300kg and 200kg of CO2 a year respectively. The supercritical extraction unit meanwhile uses a compressor to power a pump, the CO2 footprint of which is also believed to lie between 200kg and 300kg.

Sustainable solutions to power stills vary according to each distillery’s site and also the product they wish to create. Modern stills operating on renewable electricity tend to be the best bet for all but the largest distilleries, but it is openness to innovative new approaches – and a willingness to combine different technologies – that is key to the future of green distillation. Either way, the days of distilling on traditional gas-fired alembic stills are definitely numbered.

1 comment on “How gin distilleries are harnessing renewable energy”