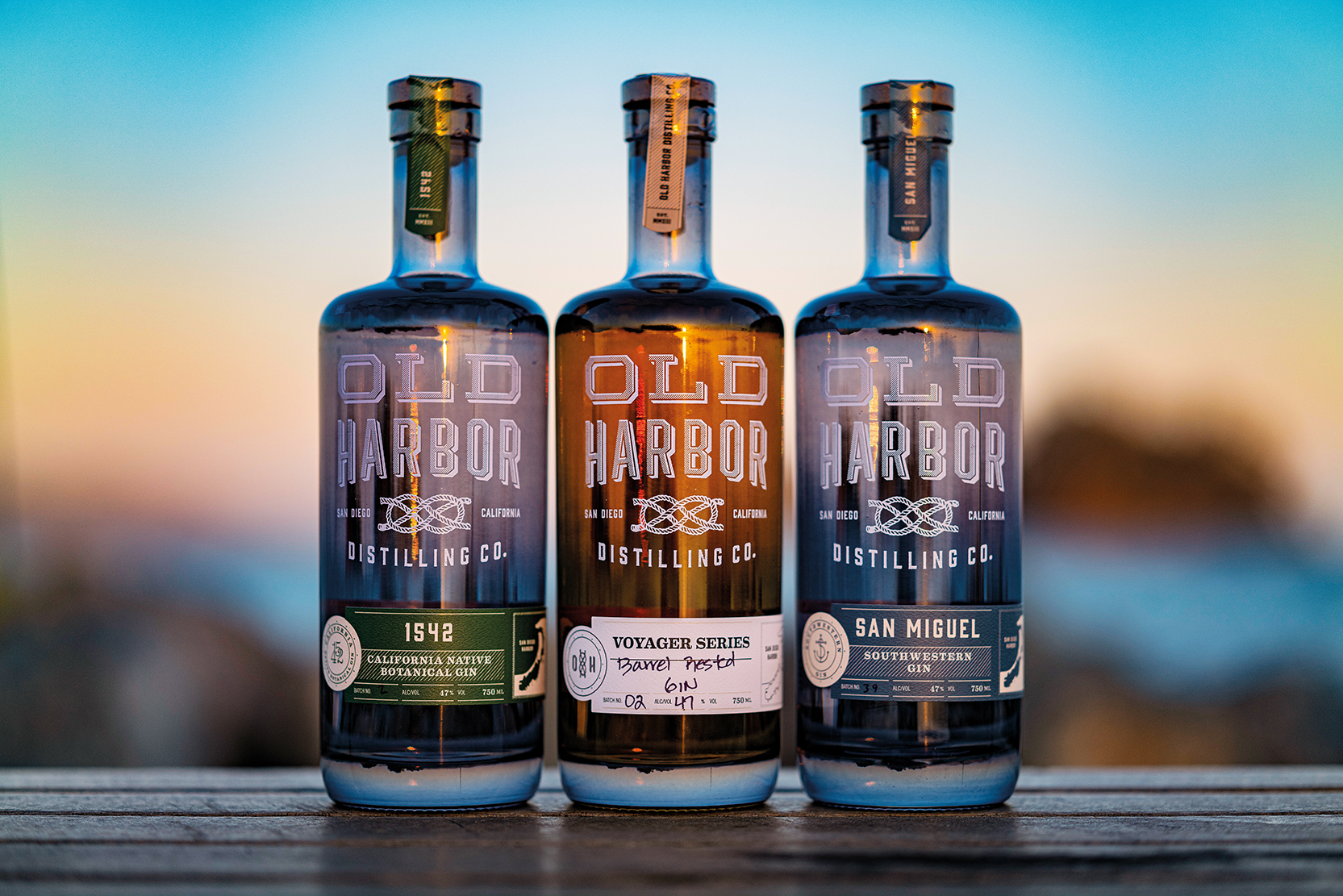 El Camino Real, the Royal Highway, is the very footprint of civilisation in California. It connected the missions and presidios of the Spanish colonial era. Towns along it grew to become the major population centres of ‘Alta California’. It also, conveniently, connects some of the best gin distilleries in Central and Southern California.

Between Dead Kennedys’ Land to the north and Beach Boys’ Land to the south, is the Rastafarian enclave of Santa Cruz, a university town known for Mission Santa Cruz, surfing, skateboarding, seaside roller coasters, organic food and ganja. It is now getting known for great gin.

The outdoor seating at Venus Spirits Cocktails and Kitchen has become the place to relax in the shade, or bake in the sun, with cocktails made from its gins and house-made tonics; signature cocktails include the summer refresher Beach Don’t Kill My Vibe, featuring strawberry, lemon and basil. The adventurous food menu runs the gamut from small bites to full meals, from burrata to smoked pork banh mi. Gin was Venus Spirits’ first release and remains a driving force in its cocktail programme, with the distillery offering two flagship gins, a rotating list of four seasonal gins and experimental releases available only at the distillery.

The restaurant was not even a possibility in 2014 when Sean Venus began distilling and released Gin No. 1. Venus, who had experience in breweries and distributing organic foods, became dismayed by the difficulties for small distillers navigating arcane liquor regulations. So, he did what ambitious entrepreneurs often do: set about changing the laws.

In the mild sunny weather and deep blue skies of Indian summer (late September through October) it’s hard to imagine a better place to sip gin cocktails than outdoors at Venus Spirits – unless you visit Venus’s colleague in the southern part of the state, CADG vice president Ryan Friesen, whose Blinking Owl Distillery in Santa Ana has a lovely umbrella-shaded patio.

At Blinking Owl, you can enjoy flights of all its spirits (gins, aquavits, vodkas and whiskeys) and at least five signature gin cocktails made with Californian ingredients, such as the Local Buzz (with kumquat-lavender shrub, local honey and a Buzz Button edible flower) or the Stateside Negroni (featuring St George Spirits’ Bruto Americano, Lo-Fi Gentian Amaro and orange essence). Meanwhile, the “Menu of Mouthwatering Awesomeness” ranges from caviar to baby burgers and seasonal specials, such as the California heirloom tomatoes salad, with basil, pickled shallots, goat cheese and vinaigrette.

Blinking Owl’s two gins are made with all organic ingredients. The gin starts with a base of Patwin white winter wheat, distilled in-house. Among the 13 botanicals in the flagship gin are sage, orange peel, lemon peel and hibiscus, the city flower of Santa Ana.

Friesen explained, “We toned down the juniper and citrus, though they are still present and by weight the greatest proportion of botanicals in the gin, and lifted up the more earthy and what I call ‘low’ or ‘broad’ flavours.”

Blinking Owl Barrel-Vacationed Old Tom Gin uses the same gin recipe and rests in late-harvest Semillon wine barrels from Napa Valley. In addition to giving the spirit a soft amber hue, the wood dials back the juniper while adding vanillin and a fruity hint of sweetness, partway toward oude genever.

“It ‘goes on vacation’ in the late-harvest Semillon barrels for anywhere from three to 18 months and comes out sweeter and with a tan,” said Friesen.

Many gin producers throughout the state have opened distillery pubs with similarly adventurous (and delicious) menus. Another culinary delight is Cutwater Spirits in Miramar, on the northern reaches of San Diego. With a menu ranging from Thai salad to smoked pork belly mac and cheese, there is something to fit every mood. In addition to a fresh locally sourced cocktail programme, Cutwater has a massive canned cocktail programme, one of the best selling of which is its addictive Gin & Tonic.

On the other side of Mission San Diego, in Barrio Logan, is ReBru Spirits, which upcycles overstocked beer into whiskey, vodka and gin. ReBru, with its sister company and roommate Thorn Brewing, opened Sideyard BBQ, a Texas-style barbeque pit, alongside wood-fired pizzeria Hott Mess. The complex of brewery-distillery-BBQ-pizzeria-speakeasy makes for an easy place to get lost in pleasure.

But pleasure isn’t the only guiding principle. ReBru was founded in part to make something useful out of surplus beer from San Diego’s more than 150 breweries – keeping swimming pools of suds from being poured down the drain.

Between ReBru and Mission San Diego de Alcalá is one of the most creative gin distilleries in the state, Old Harbor Distilling Co., which launched San Miguel Southwestern Gin on 28 September, 2014 – 472 years to the day after the Spanish explorer Juan Rodriguez Cabrillo claimed San Diego Harbor for Spain, naming it San Miguel. The gin contains botanicals inspired by Southwestern cooking, including sage, cilantro, cucumber and lime.

Another culinary-inspired Old Harbor gin, a collaboration with the Italian restaurant Ospi in Venice Beach, is made on a pasta theme and available only at the restaurant.

“A marinara-inspired gin seemed like a fun direction,” founder/distiller Mike Skubic said. “It has basil, red pepper, parsley, olive oil, oregano, balsamic vinegar, actual pasta, tomatoes and lemon zest, and uses our Adventure gin distillate as a base. It works brilliantly in a classic Negroni.”

Thinking outside the bottle, Old Harbor also collaborated on an oyster gin with Skubic’s friends at Liberty Call Distilling Company.

“With both of us being nautical-themed, we figured shoot for the moon and go with something a little strange,” said Skubic. “This one uses miso soup instead of water to proof the NGS for distillation, fresh oysters, yuzu, and bonito flakes. [It’s a] very strange one, but quite delicious.”

Amass founder and distiller Morgan McLachlan also co-founded The Spirit Guild distillery in LA’s Art District in 2012. Instead of opening a restaurant, McLachlan combined her distilling skills with a love of botanicals to make a variety of products from bath salts to lotions, and a fantastically complex, elegant and nuanced gin.

“We use 29 botanicals in Amass. It is a lot, but each botanical serves a purpose in the matrix of the flavour profile,” McLachlan said.

After LA, El Camino Real rejoins the coast at Mission Basilica San Buenaventura, a few miles west of where Ventura Spirits was founded in 2012.

“Wilder is a distinctly Californian, particularly central-coast gin, made with a bunch of native wild-foraged botanicals, and we use herbs like purple sage, and sage brush, yerba santa and California bay,” said Ventura Spirits partner Henry Tarmy. “And you know the basic idea is to communicate, in the most compelling and refreshing way possible, the sensory experience of a walk up into the hills around our distillery in the mountains along the coast.”

As Camino Real crosses north into Central California again, it turns inward, at Mission San Luis Obispo. The area around Paso Robles boasts 10 distilleries within a small radius, and another four distilleries near SLO. Re:Find Handcrafted Spirits, Bethel Rd. Distillery, Calwise Spirits Co. and Krobar Craft Distillery all make gin within a short distance of each other, and Krobar has two extensions into SLO: the Krobar Craft Distillery Cocktail Bar and Restaurant and Mixed Company Cocktail Restaurant at the SLO Market.

All of these distilleries are within a short distance of the first highway, laid out by the first European settlers in California.

You can read more features from issue 15 here or more instalments from our US road trip series here.

0 comments on “US gin road trip: On El Camino Real in California”