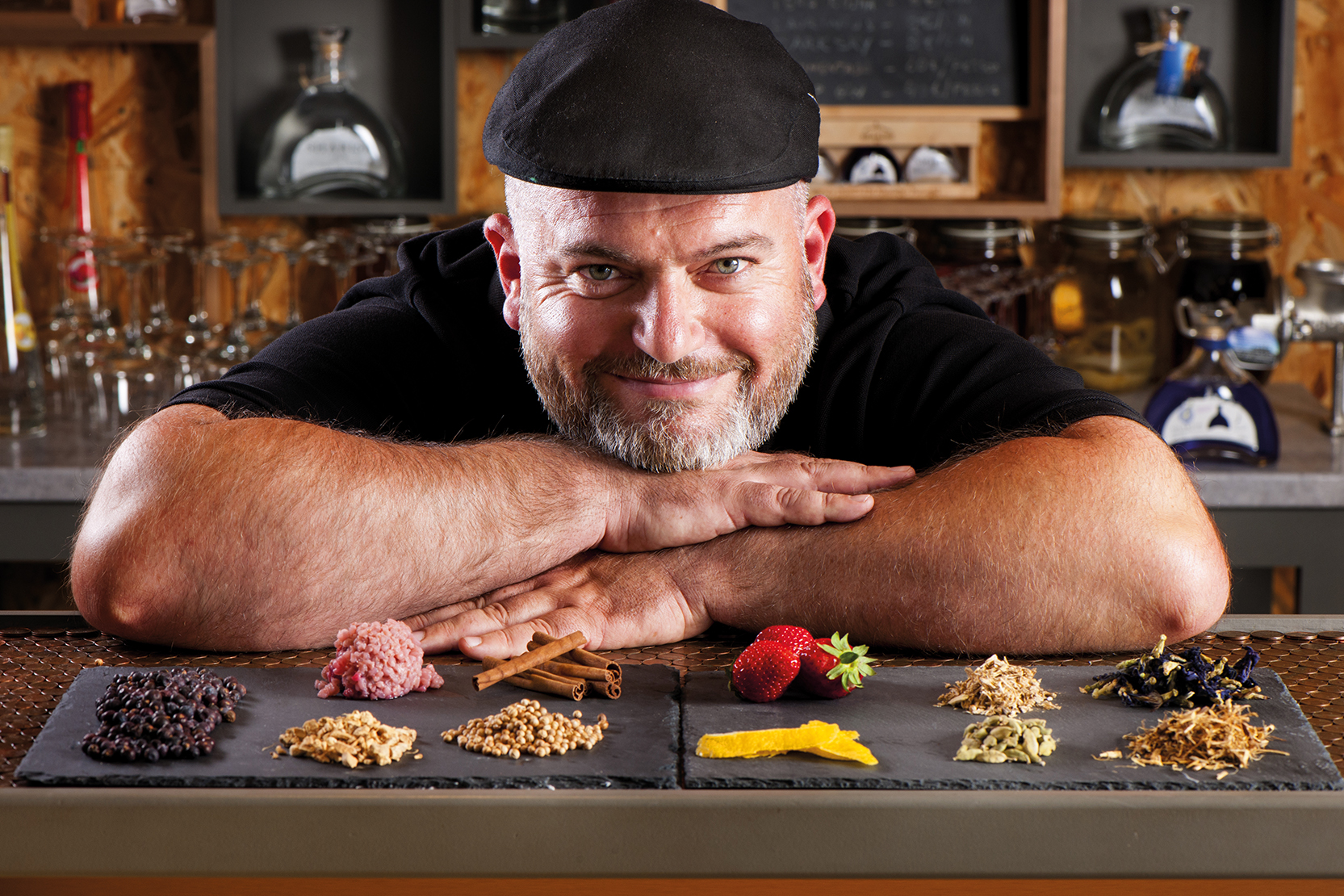 Meet the Portuguese distiller making the most of his country’s fruits, flowers and herbs

“Everyone has a lemon tree here,” says António Cuco, waving towards his citrus trees. “My friends bring lemons and oranges from their gardens in exchange for gin.”

We’re outside the Sharish Gin Distillery, near Monsaraz in central Portugal, and António is the country’s premier and best-known artisanal gin maker. Olive trees surround the building, and bees saunter between fragrant banks of rosemary and lemon verbena.

The trees and bushes aren’t just for show, though. Ever since António began making gins about seven years ago, he’s been determined to create distinctly Portuguese flavours, and so every one of his gins contains nationally grown fruits, herbs, spices or flowers – many of them from his own garden.

Although Sharish has expanded rapidly and is now exporting to a growing list of countries, António still distils all his own botanicals before correcting the alcohol content and adding them to a gin base made from wheat and rice.

“My signature is that all my gins must have a Portuguese fresh fruit in them,” explains António. “It’s quite unusual to use fresh fruit in gin, but most gin companies are not in southern Europe and so don’t have what we do – we have raspberries and strawberries 12 months of the year here.”

It’s this proudly Portuguese approach that has garnered a lot of love from a traditional population more used to drinking port and wine than gin, and which has also won him fans around the world.

The surrounding countryside is certainly well stocked for his botanical experiments. Running from Lisbon’s Tagus river south to the Algarve, and stretching from the Atlantic coastline to the Spanish border, the Alentejo region has olive groves, vineyards and fruit trees stretching to the horizon, and fresh herbs including mint, coriander, thyme and pennyroyal feature heavily in local cooking.

To get a better sense of how António makes use of this larder, we head inside to the distillation room where we’re met by a hot, scented fug, and clear liquids trickling along pipes from four copper stills.

The botanicals being distilled are labelled as coriander, lemon verbena, juniper, and a raspberry and strawberry combination. António explains that the blue flames under the stills maintain a temperature of 78-80°C, and that he only uses natural filtered water from the north of Portugal with a low pH.

Outside the distilling room, he shows me a row of steel vats containing distilled aromatics, including Pear Rocha (a Portuguese variety of pear), cardamom and ‘base blue’ – the fresh strawberry and raspberry distillation used in Sharish’s Blue Magic gin. As its name suggests, the gin is a dramatic blue, thanks to an infusion of blue flowers from the tropical pea plant, Clitoria ternatea. When citric acid from tonic is added, the gin turns pink.

António’s favourite room is still to come – the ‘infusion room’ is stacked from floor to ceiling with plastic tubs, each containing a different fruit,  flower, herb or spice, ready to be distilled.

“This is where everything starts,” says António, visibly coming alive as he begins rifling through boxes, opening tubs and fanning their aromas towards me with the lid. “Coming in here and picking different aromas is really fun,” he grins.

He reveals apples, limes, raspberries, tangerines, and lemon verbena branches from outside with a beautiful citrus scent. Then we’re on to the dried boxes of white pepper, juniper, liquorice, cloves, lavender from upper Alentejo, and orange flowers with a sweet, honeyed aroma.

Years ago, when António was made redundant from his job as a teacher, it was these Portuguese ingredients that inspired his first foray into gin making.

“It was 2011-12 when the gin craze was starting in Portugal,” he remembers. “I was working in my parents’ restaurant and friends started coming across the border from Spain with more and more unusual gins – by 2013 I had about 50 bottles.

“They would come to the restaurant to try them, and one particular day – the sort where lunch starts at midday and finishes at midnight – a friend said to me, ‘Why don’t you make your own gin?’. So I started reading and gathering as much information as I could about gin types, aromatics, and distillation, and amassed about 400 texts.”

Remembering his chemistry lessons at school, he turned a pressure cooker into a still, and began experimenting. “I knew I wanted to make something that was very Portuguese, with a flavour that you could only find here,” says António. “I wanted also to recreate flavours and aromas of my childhood, so I used Bravo apples from Esmolfe, in the north of Portugal, which I remember my grandmother giving to me at a fair.”

To this, he added lemon verbena, oranges, lemons, coriander seeds, cloves, vanilla and cinnamon, and created the first Sharish gin, which he still sells today as the distillery’s original recipe. These early experiments were good training for more experimental flavours later on, says António.

“Because I distilled each botanical myself in the beginning, I learnt a lot about how flavours work together,” he says. “Now I have a lab where I keep all my flavours and infusions for making new gins and distilling 15 litres at a time.

“I’ve had a few disasters – cardamom, cinnamon and cloves are all very difficult to work with as they are such dominant flavours. Fruits are much easier. I’ve got
14 different gin recipes now, and have basically used all the ingredients I can
from Alentejo.”

Other Portuguese flavours are elegantly combined in his more adventurous limited-edition gins – his current Pera Rocha features the famous pear variety, along with botanicals of mandarin flowers, pine needles, lavender, elderflower, cloves, germanic iris, liquorice, angelica root, laurel seed, tangerine, lemon and lemon thyme. Laurinius replicates the original Sharish gin recipe, but replaces the Bravo apple of Esmolfe with Pear Rocha, and has a twist of laurel leaf. António ages the gin for 12 months in 650-litre brandy barrels from Lourinhã, a region of Lisbon, giving it a pale straw colour and a soft complexity that he says challenges drinkers of whisky and wine spirits.

Having well and truly made use of Portugal’s mainland ingredients, António is going further afield to the Azores, a group of Portuguese islands 1,000 miles off the Atlantic coast. He plans to launch his third portfolio gin in September using distilled Azores tea – the only place in Europe to grow it – and rounded off with bergamot and kaffir lime peel.

After hearing about all the Sharish gins and rummaging around the distillery like Charlie in Willy Wonka’s factory, I’m desperate to try some. António seats me at the Sharish bar and makes me a gin and tonic with his Sharish Original, served with an apple slice and lime peel.

The soft aroma of the Brava apple comes through clearly, and the gin has a fresh citrus flavour, rounded off nicely by the lemon verbena and cloves that come through at the end.

Over our drinks, we talk about António’s switch from teacher to successful gin maker. “It was a 180-degree turn in my life,” he says thoughtfully. “Every bar in Portugal now has Sharish Gin. I never thought it would happen – I am very proud.”

1 comment on “Sharish Gin: Painting a picture of Portugal”