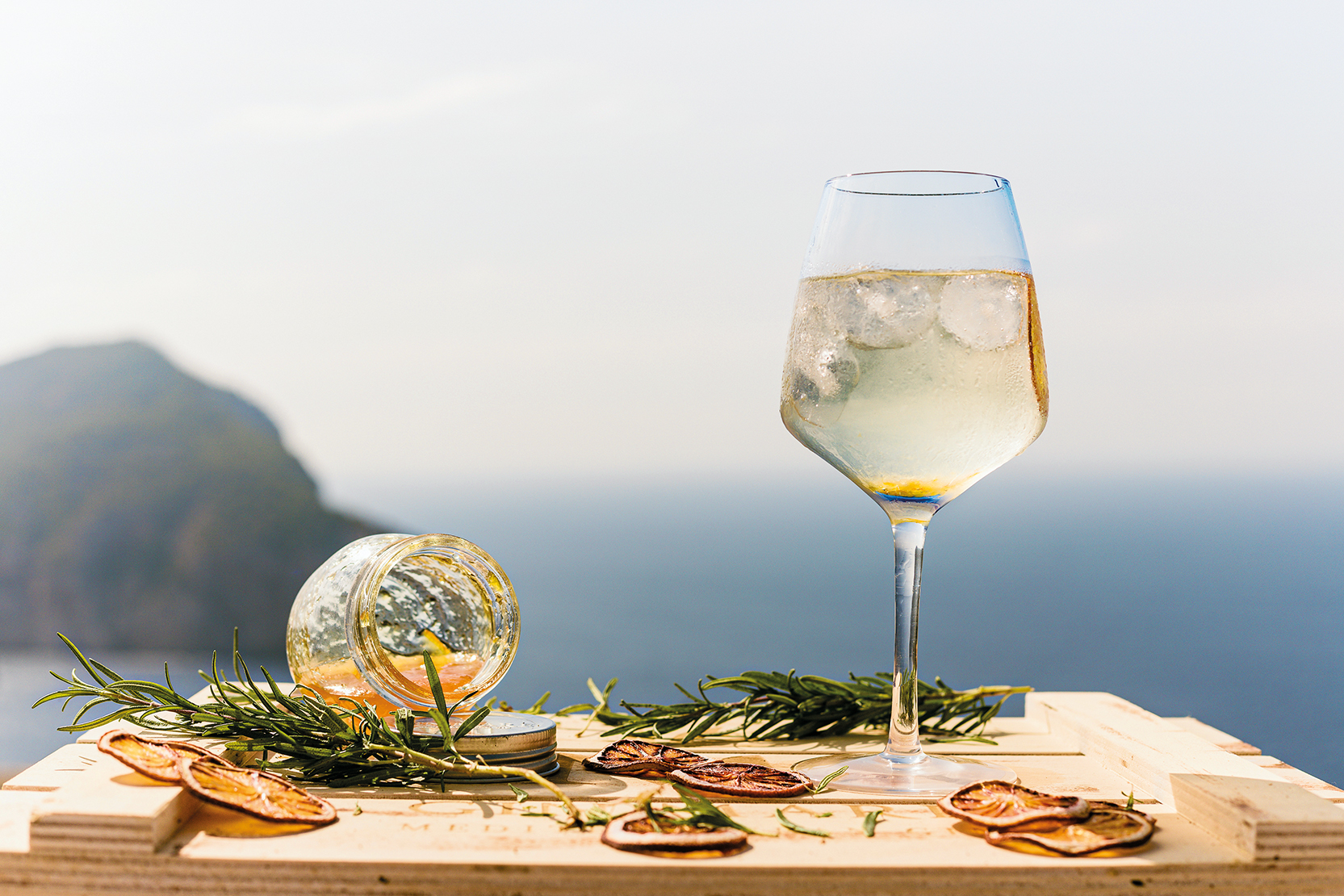 The world is full of truly transportive gins that can evoke places, sensations and memories with just one sip

Of all of the senses that humans possess, I would argue that taste and smell make the strongest associations to a place or to a time. A whiff of wild garlic and I’m instantly back to exploring the woodlands as a kid with my brother, imperial leather soap reminds me of my grandparents’ house, and basil takes me back to my Mum’s discovery in the late 90s of a wondrous new jar that you simply added to pasta to create a tasty meal: pesto.

These kinds of associations trickled into my earlier gin tastings. What I now know as “heavy with coriander seed” reminded me of a wet dog, specifically one that had just been shampooed! Once, when tasting an in-development gin, Mum’s pasta discovery wouldn’t remove itself from my brain. Declaring “It’s pesto!” to a room full of bartenders led to a few confused looks at first, before it became evident that the gin in question counted basil and thyme among its botanicals.

I vividly remember a gin tasting when a client smelled angelica root, noted its dusty, musk-like odour, and said, “It smells like old churches.” She later revealed her parents made their own bootleg gin during World War Two that tasted like Christmas year round, as her mother simply added the spices that she had around the house for baking into the dubious spirit her father made in the shed. She remains one of my favourite guests to this day.

And while a smoky whisky may transport you to Islay, a Caribbean rum puts you on a beach and a limoncello takes you back to that holiday in Rome, gin can do it all and more. Its secret? Botanicals, which can be any edible plant, herb, flower or spice.

A dip in the Mediterranean

Aiming to capture the Mediterranean coast in a bottle, Gin Mare was perhaps one of the first to go all in with a botanical line-up to reflect its inspiration. Basil, rosemary and thyme provide strong herbal notes alongside arbequina olive and zesty citrus to reflect the aromas and flavours of the Med, all distilled just outside Barcelona. It’s bright, full of herbal green notes, and works amazingly well in a Red Snapper.

There are other gins with a similar brief. Gin d’Azur, from France, is reminiscent of the famous beaches of the Côte d’Azur and landscapes of Provence with rosemary, thyme, lavender and marjoram. Closer to home in London, Portobello Road has just released its Savoury Gin, inspired by the botanicals of Corsica. Or even just using a bottle of Fever-Tree Mediterranean tonic with the gin in your collection can evoke the same, coastal feeling.

The spice trades of India

One of the first gins to come out of India, Stranger & Sons Gin is distilled in Goa and sources the majority of its botanicals from within its home country. A mix of Indian citrus peels, including gondhoraj lemon and Indian bergamot, gives this gin a perfumed aroma and citrus boost to taste. Black pepper, juniper and warm spice from mace and cassia complement the citrus beautifully. It’s a classic style of gin overall, but has an unmistakable profile of Indian spice and citrus.

If you’re looking to explore the wonders of India further, you can’t go wrong with Jaisalmer Gin, inspired by ‘The Golden City’ in Rajasthan. Its key botanicals of sweet orange peel and liquorice give a wondrous sense of an Indian oasis within a desert.

You could argue that because of their history with akvavit, a spirit flavoured with
herbs and spices, the Scandinavians had somewhat of a head-start when it comes to putting together a local botanical recipe.

Hernö is one of the most-awarded Swedish gins for a reason. Its additions of meadowsweet, vanilla and lingonberries alongside classic gin botanicals burst out of the bottle in every taste.

With buckets of pine up front, a delicate sweetness and a jammy note from the lingonberries, if you close your eyes, you could be sitting enjoying sunshine on the High Coast of Sweden. It’s distinctive, elegant and very Scandi indeed!

You could also enjoy summer across the Baltic Sea in Finland with Kyrö Gin, with its use of rye as a base spirit combined with meadowsweet and sea buckthorn. Have it in a G&T with cranberries and a sprig of rosemary to experience that 3am sunrise across a misty Finnish meadow.

Hiking through the wilderness

St George Terroir Gin from the USA is a masterclass in capturing a sense of place. One sip and you’re transported to the forests of California, surrounded by native conifers including Douglas firs, which make an appearance in the gin’s botanical makeup, as well as pines and redwoods.

For something of a similar ilk from the UK, try Silent Pool’s new Green Man Woodland Gin. If St George captures the essence of the mighty Californian redwood, then this eco-friendly number captures the softer feeling of wandering through a British woodland. Try both in a Gimlet with lime cordial (or equal parts sugar syrup and fresh lime juice) to let the gins, and all their nature-filled glory, shine through.

A walkabout Down Under

Halfway around the world from gin’s birthplace you’ll find a huge array of Australian botanicals with unique names and flavours, such as the nutty, bush-tucker notes of the wattleseed in Ironbark’s Wattleseed Gin, or the tartness of the lilly pilly in Manly Spirits’ Lilly Pilly Gin.

Perhaps one of the best-known antipodean gins is Four Pillars. Its use of Tasmanian pepperberry mingles well with the darling of the Australian gin boom, lemon myrtle, to really evoke a cross section of everything Aussie. Or, if you’re looking for a bigger whack of juniper (and alcohol, for that matter) with your Tasmanian pepperberry, try Never Never Distilling Co.’s Southern Strength Gin.

An island nation, after all

The sheer number of different flavours from just the seaweed varieties native to UK coastlines is staggering. Off the coast of Scotland, there’s Isle of Harris Gin, which utilises sugar kelp from loch-seas as a key botanical. Add three to five drops of the distillery’s Sugar Kelp Aromatic Water to a Harris gin and tonic and you’ve booked your way to the outer islands on an old ferry.

Other gins such as Shetland Reel and Isle of Barra also look to capture their own coastal feel. Barra’s use of native seaweed and 17 other local botanicals truly encapsulates an Atlantic surf breaking on its shores. Meanwhile, the use of bladder wrack in Shetland Reel Gin means the spirit is always reminiscent of a school trip to Robin Hood’s Bay to measure seaweed desiccation, and waking up in a youth hostel on the beach with the salty air whipping at my face.

I got a feeling

Beyond a time or a place, gin can also capture a feeling. Fresh Rain Gin from
That Boutique-y Gin Company has the aroma of petrichor – the smell of rain landing on soil. Using beetroot as a natural source of geosmin to provide big earthy notes, it’s big on the juniper, piney and earthy, and honestly tastes like stepping outside after a rainstorm.

Finally, it’s well known that the best and most dramatic sunsets take place after a good rain storm, and if Fresh Rain Gin is the perfect rainstorm then Bombay Sapphire’s new Sunset Gin is the gin for when the sun goes down. Inspired by the mellow heat and orange glow of a setting sun, it adds earthy turmeric, a tinge of spice from white cardamom and bittersweet mandarin to Bombay Sapphire’s classic botanical line-up. The result is a complex yet rounded gin with subtle spice layered over juniper, a smooth mellow citrus finish from the mandarin – and a wondrous feeling of that late evening sun washing over you.

1 comment on “Spirited away: how gins evoke places and memories”