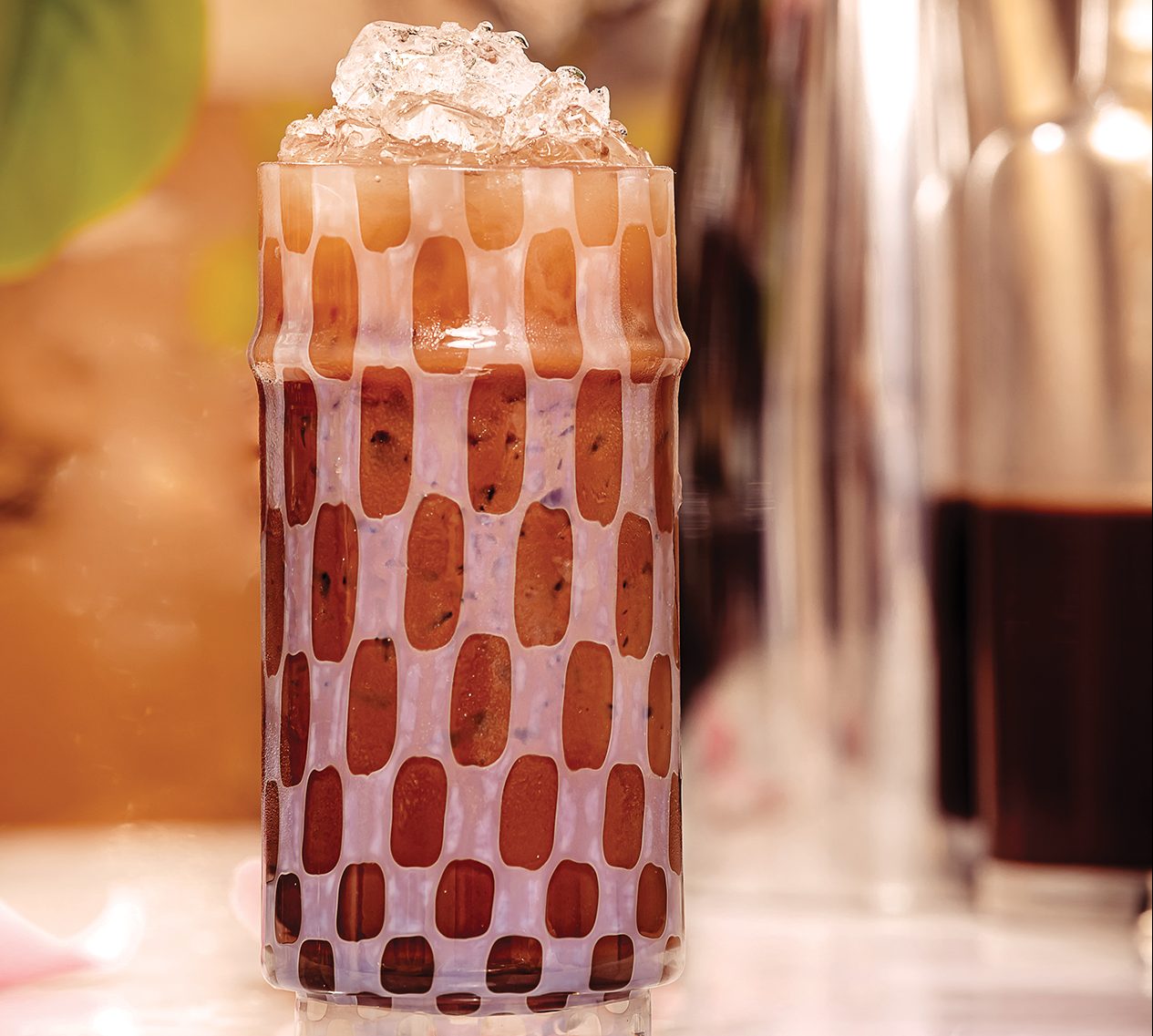 Gin and ice cream may seem an unlikely couple, but what do they offer to each other?

Some things are matches made in heaven; be it bacon and eggs, peanut butter and jelly or gin and ice cream, we take these pairings to be self-evident. What? Was it something I said? I stand by my American love of the textural complexities of a peanut butter and jelly sandwich. Oh, it seems the idea of juniper spirits and frozen desserts has not stood the test of time – why is that? What is ice cream if not cream, sugar, flavour and eggs? Sounds like a classic cocktail to me. So, when did adult imbibers turn their backs on this dynamic duo?

To fully understand this perplexity, we need to look at an early 20th-century phenomenon known as the soda fountain. Be it the Soda Shop, Malt Shop, Milk Bar or ‘Temperance Spa’, as it was called in Boston, Massachusetts in 1882, this counter where adults and youth alike could order a fizzy beverage for whatever ails you gained popularity with the American drug revolution of the 1850s. Many of these fountain drinks were concoctions made from extracts of various drugs, flavoured and effervesced to make them palatable.

While carbonated soda bottles had been around since 1783 when Johann Jacob Schweppe invented a container to hold bubbly mineral waters, it was British-born inventor John Mathews (aka the Soda Fountain King) who is credited for a machine that could artificially carbonate water in large enough quantities suitable for a busy drugstore’s needs in 1832.

This idea of bittered and medicinal sodas might not fit with the Main Street USA, Norman Rockwell image of teeny boppers sharing creamy beverages in poodle skirts and crew cuts. We can credit American Prohibition for the popularity of these modern types of soda fountains as they filled the social void caused by the closing of bars. “The bar is dead, the fountain lives, and soda is king!” John Somerset wrote, in Drug Topics’ June 1920 issue. And so, the golden age of the soda shop was born.

While each soda clerk – ‘soda jerks’ as they were affectionally known, inspired by the jerking action of the soda fountain handle back and forth to access both a high and low pressure of CO2 to create a foamy head – had their own specialty, they would recreate riffs on popular trends such as cream sodas, fruit phosphates, sarsaparilla, ginger beer, floats and milkshakes. With the growing demand for these sweet beverages, drugstore counters made way for entire shops dedicated to sodas with limited lunch menus, added to attract the working folks, and later heartier American diner food for evening meals.

While the first wave of soda clerks were teenage boys, there was an influx of unemployed bartenders during Prohibition and shop owners usually preferred their ability to multitask, reliability and cleanliness. Bartenders-turned-jerks often drew crowds of the female type, that would then attract gainfully employed males who would spend more money than their teenage counterparts. Here we saw the introduction of more “adult” flavours of aromatic bitters, herbal notes and even savoury syrups that helped dull the overly sweet concoctions. Luckily Prohibition only lasted 13 years and with its repeal bartenders returned their ice cream scoops and picked up a jigger once more. However, the general palate had shifted and spirit-driven cocktails were no longer seen as the drinks du jour.

There is a growing movement in combining these three moments in fountain history to create something new: the bitter flavours of the drugstore era, the playfulness of the soda clerks and the techniques of the Prohibition bartender mixed together in equal measures, sprinkled with the wealth of today’s gin profiles. I encourage you to think beyond the gin and tonic and the Martini to channel your ‘inner jerk’ with the following recipes.

The original meaning of cream soda was to imply quality of product; a guest would ask for a ‘cream soda’ and the soda jerk would make what they thought was the best.

This eggless cocktail will be a showstopper for any occasion, balancing both the complexity of gin and the rich spice notes of cacao. I recommend a big juniper gin to stand up next to the syrup and chilling all your ingredients before mixing to capture the most fizziness possible. Make sure you read your soda siphon’s instructions before using. If the moment moves you, this makes an excellent hot soda, substituting hot water for the soda water.

* To make the dark chocolate syrup, add 100g sugar, 65g unsweetened cocoa powder and 125ml water to a saucepan and bring to the boil. Take off the heat and stir in 250ml milk and 1tsp vanilla extract. Cool to room temperature and chill; refrigerated, it will keep for up to five days.

The first reference to the milkshake of today appeared in Atlanta Constitution in May 1886. These flavoured ‘milks’ had clerks vigorously hand shaking until the walnut-sized ice cube was melted, like egg nogs and flips from the bar world. It wasn’t until the White Cargo cocktail in Judge Jr’s 1927 book Here’s How that gin and ice cream met, further refined in Harry Craddock’s 1930s Savoy Cocktail Book.

This drink takes it a step further, building on the White Cargo’s creamy nature but adding bitter citrus and herbal vermouth to round out the palate.

Add 45ml gin, 1 scoop of citrus ice cream (preferably lemon or grapefruit), 7.5ml Italicus and 15ml blanc vermouth to a cocktail shaker and shake until combined (feel free to use a blender – the texture will be a bit thinner, but it will be just as delicious). Pour into a glass of your choice and garnish with freshly grated nutmeg.

Medicines were often paired with mineral waters as they were both seen as ‘healthy’, no matter how unpleasant they were to consume. Taking a page out of Marry Poppins’ playbook, sweeteners were often added; as she said, “… sugar helps the medicine go down.”

Juniper has been used as a cure for digestion problems, while ginger is a known anti-inflammatory and antioxidant. Add fruit-driven tonic waters and you have a mixture to get you moving in no time (please note, there is no proven science to these statements so take them with a grain of salt).

The story goes that, on a particularly hot day in 1874, Robert McCay Green of Philadelphia, Pennsylvania ran out of ice for the drinks he was selling and used vanilla ice cream from a neighbouring vendor, inventing a new drink.

An indulgent, fun and delicious take on two classics. The cola, while not a “traditional” accompaniment for gin, helps lengthen the drink with additional botanical flavour while the ice cream complements the bittersweet flavour of Campari.

Half-fill a large, tall glass with ice. Add 15ml each of gin, Campari and red vermouth and 1 scoop of vanilla ice cream. Slowly top with cola and garnish with whipped cream, sprinkles and a fresh cherry.

1 comment on “Gin and ice cream: reviving a dynamic duo”