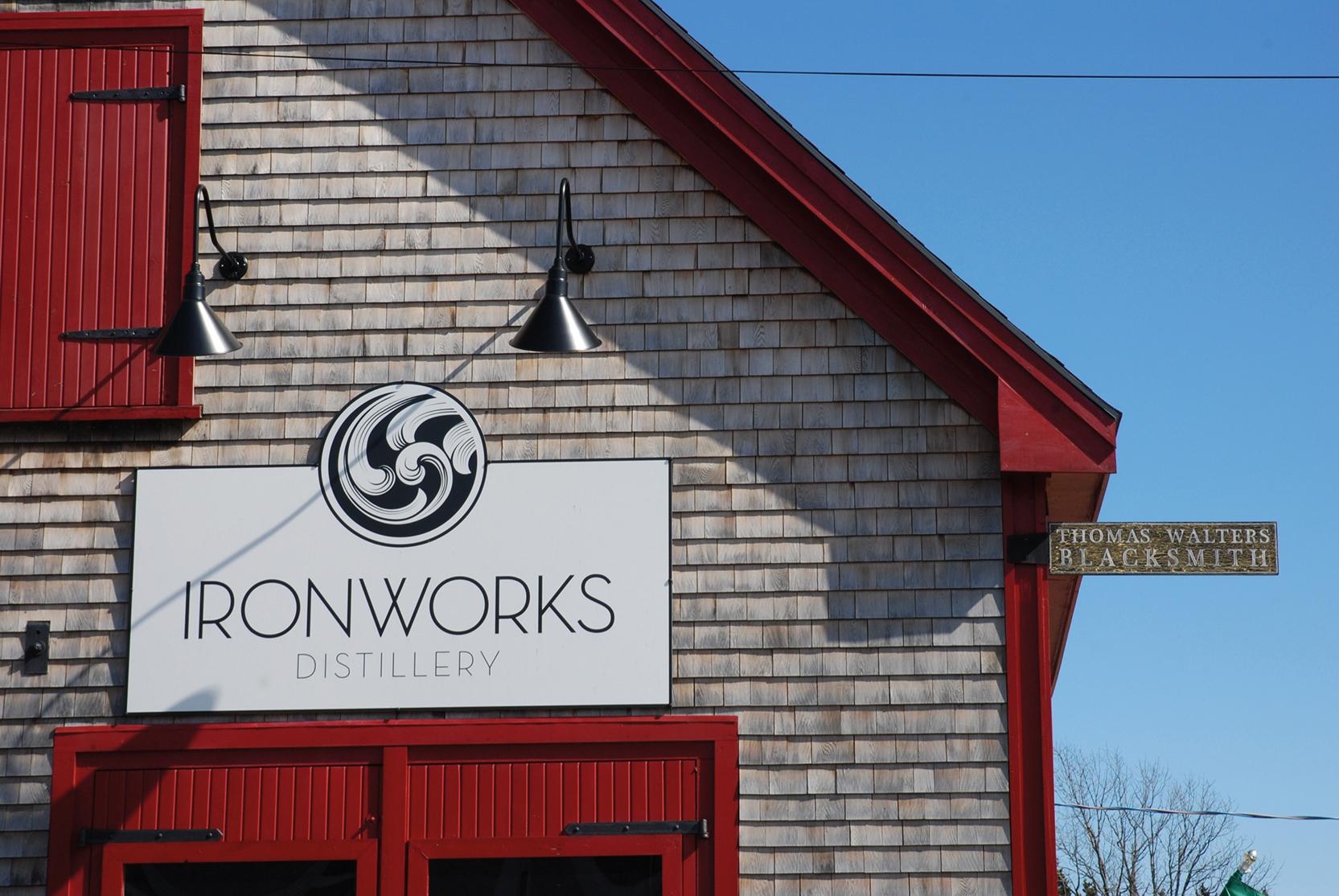 Vivaldi’s The Four Seasons was a hit violin concerto in 1749 when construction began on the Halifax Citadel. British engineers built this hilltop fortification in the shape of a star to defend the harbour from every angle. However, the expected invaders never arrived. Not even touring Italian violinists ventured to visit Halifax. So, British troops relied on local fiddlers for entertainment while sipping on imported rum. Times have changed. Troops no longer patrol the Citadel’s perimeter, replaced today by Canadian actors. And with the shift to farm-to-table culture, Nova Scotia-made gin is winning the battle for market share.

Just a 20-minute walk down from the Citadel sits one of the province’s star distilleries. That’s where school friends Joshua Judah, David LaGrand and Graham Collins founded Compass Distillery in 2017. They marked their north-south aligned distillery tower with compass points, to reflect their philosophy to follow a true path, making everything from scratch.

The Four Seasons of GiNS

It’s at Compass that distiller and musician Alex Wrathell has set the four seasons to the beat of a different drum. His masterpiece is a gin quartet that he calls GiNS – a drummer’s paradiddle metaphor – composed with nothing but Nova Scotia seasonal ingredients. “We are quite fanatical about doing things honestly and locally. It was a natural fit to make these 100 per cent Nova Scotia gins,” explains Collins.

“The starting point is fermenting Nova Scotia-grown agricultural products that we can then distil into a gin base,” explains Wrathell. “The idea to produce 100 per cent Nova Scotian gins originated with us realising that juniper grows all over the province. If we could start with Nova Scotia grain, then we could redistil with local juniper and find enough supplemental botanicals to produce interesting gins that capture the seasonal terroir.”

Making gin from all Nova Scotia ingredients was a challenge since the land doesn’t sustain traditional ingredients such as citrus peel. Wrathell and his team took that challenge head-on and set out to discover what each season had to offer. Their first release, Spring GiNS in 2018, explored spring flavours through botanicals such as chokecherry blossoms, spruce tips and elderflower. Summer followed with Queen Anne’s lace, peaches, goldenrod, rose petals and more. When autumn leaves began to fall, Wrathell picked up the tempo for Fall GiNS, infused with teaberry, rosemary, thyme, crab apple and a host of other local flora – all of them structured around a homegrown juniper groove.

“There is an interesting characteristic in wild Nova Scotia juniper compared to imported,” says Wrathell. “It’s fruity and piney like juniper should be, but it also has a seaside salinity and reminds me of being close to the ocean. Just like some Nova Scotia distilleries using dulse and rosehip, the juniper evokes a sea air characteristic.”

Compass was not Nova Scotia’s first homegrown gin distillery. However, using local ingredients to make gin is a very new concept here. It was 1951 when McGuinness Distillers launched Nova Scotia’s first large-scale distillery in the village of Bridgetown. Among many products, its Acadian Distillery produced Acadian Distillers Deluxe Gin which was packaged in an attractive studded glass bottle. Those were different times, and using local ingredients wasn’t part of the business plan. The bottle’s tear-drop shape foreshadowed its future. In 1987, declining sales forced the Acadian Distillery to close.

So, there were tears of joy when Thomas Steinhart brought gin making back to Nova Scotia in 2014. His Steinhart Distillery, on the Northumberland Shore, began making classic gin that is renowned for its intricate complexity. But it was Ironworks Distillery in the postcard town of Lunenburg that first embraced Nova Scotia-grown botanicals. Ironworks Gin, released in 2015, included Nova Scotia juniper berries, local rose hips and a light infusion of balsam fir bud eau-de-vie.

“Our use of Nova Scotia juniper is based more on philosophy and interest in including local elements in our gin recipe, than a preference for their flavour profile,” explains distillery co-founder Lynne MacKay. Her gin uses about five per cent Nova Scotia berries along with Bulgarian juniper. The Bulgarian berries tend towards round, sweet juniper flavours, whereas the smaller Nova Scotia berries bring pleasing notes of brine to the gin.

MacKay attributes these differences to the distinct climates where they grow. She never intended for locality to become a constraint, though. “I wanted to include the classic ‘gin’ ingredients like coriander, angelica root and lemon peel in the recipe; it really wouldn’t have been appropriate. Using three Nova Scotia ingredients and doing the distilling work here in Lunenburg was sufficient to define our gin as a local product,” she says.

Down by the bay

Due west of Lunenburg and just a stone’s throw from the Bay of Fundy’s tortuous tides, Still Fired Distillery flavours its Fundy Gin with dulse seaweed harvested from the temperamental waters. It also employs a curious distilling method that involves putting beach stones in the still. “We thought, why not use Fundy stones as our scrubbing plates,” explains distillery co-founder Andrew Cameron. Taste their gin and you’ll wonder if this Flintstones technique might be distilling’s missing link.

“There is something about living next to the ocean that works its way into the terroir,” says Wrathell, back at Compass. “The flavours in this year’s Winter GiNS came from an idea that I’ve had for a long time. I remembered going for a hike in the wintertime and coming back to a cabin to decompress and warm up around a wood stove. That feeling of smelling the smoke from the burning wood, being cold, then warming up in the darkness of shorter days was the inspiration.” Wrathell’s whimsical memories came roaring back when he smoked juniper berries with oak and cherry wood to create a dark, earthy flavour that supplements the juniper’s piney character. “I accent some of that woodiness by toasting birch bark then distilling it.” Tangy sea buckthorn berry and a host of other botanicals balance these darker flavours.

Where the crow flies

Balancing flavour is a key element of Canada’s east coast gin story. Jill Linquist, co-founder of central Nova Scotia’s Raging Crow Distillery, strongly supports using local whenever possible as long as it maintains the spirit’s integrity. “The idea for Spruce Tip Gin came from an article I saw in the newspaper about making a spruce tip simple syrup and using it in cooking. I am an avid cook and thought it sounded interesting, and then the wheels started turning.” Linquist harvests her spruce tips in the early spring on the distillery property and at a cottage 20 minutes away. They imbue the gin with lush evergreen notes, which she balances by sweetening it to complement inherent citrus-like spruce tones.

Today, in Nova Scotia, the compass points visitors to some of Canada’s most enjoyable tipples. The Citadel may no longer protect the province from imagined military invasions, but the distilleries are well fortified for an inevitable onslaught of gin lovers once word gets out. With Compass Distillery at the fore, Nova Scotia is well prepared to welcome these invaders, this time with brimming glasses rather than Charleville muskets, no matter the season.

0 comments on “How Nova Scotia gin distillers found their bearings”