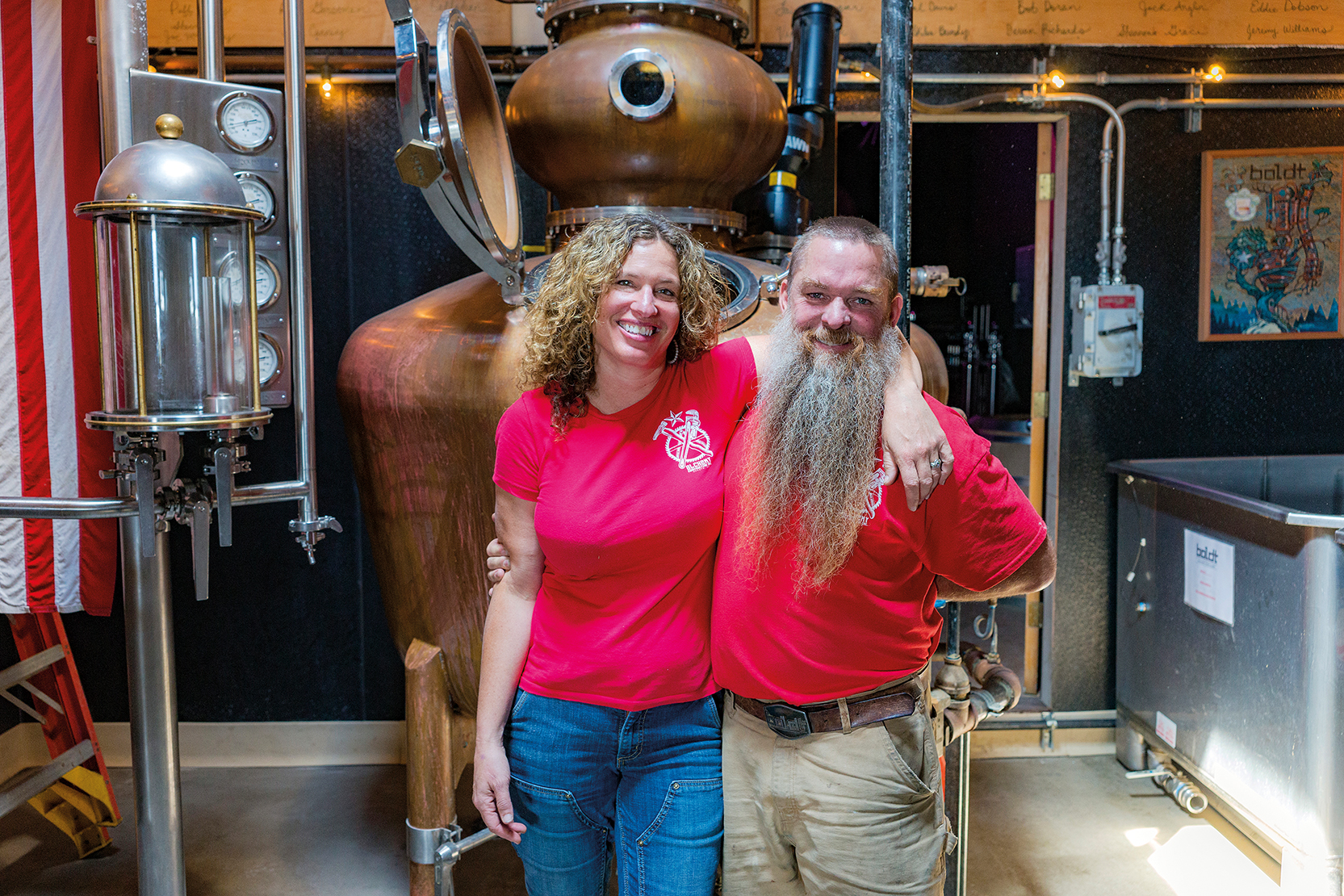 The story of California gin, and craft gin in general, begins with Fritz Maytag installing garage doors in a corner, off a loading dock at San Francisco’s Anchor Brewing, in 1993. Behind those roll-up doors, the ‘water committee’ met. In the historic brewery, which Maytag had bought 30 years prior, they were “testing the water” for distilling and trying to keep the distillery a secret from the general public until the spirits were released. All the employees knew, but the project was concealed from the prying eyes of electricians, pipe fitters and other tradesmen wandering by.

Maytag, heir to the appliance fortune, had every reason to believe people were watching his moves as he tinkered with creating whiskey and gin. Within a few months of ordering malted rye for Old Potrero Rye Whiskey, some of Anchor’s competitors produced rye beers, apparently tipped off by a grain supplier. But it was still with relative surprise when, three years later, Anchor Distilling released a whiskey, soon followed by a gin. When Junipero Gin was released in 1997, it was not only a surprise to consumers – it was the first craft-distilled gin in the US, an outlier of the coming resurgence.

Distiller Bruce Joseph started part-time on the bottling line with Anchor Brewing in 1980, fresh out of college, not knowing it would become a career choice.

“What I liked about Anchor was, after working here for a few months, I thought, ‘Man, these people, they’re kind of passionate and it’s almost like they’re on a mission’,” said Joseph. “They felt like they could do whatever they wanted and they were going to convince people why this kind of beer is better.”

Joseph was one of a few employees assigned to the ‘water project’ at its genesis, and – though the company has changed hands twice and the stills moved across town – he is making Junipero Gin on the original still. “I think that ability to do something where you feel quite a bit of pride in the company and the products is everything,” he said.

In the shell game of corporate fortunes, Sapporo purchased Anchor Brewing and Distilling, and the spirits portfolio spun off to become Hotaling & Co., a name borrowed from the Old Potrero whiskey brands which was lifted from a verse about the 1906 earthquake and fire that destroyed San Francisco:

Hotaling needed to move the stills out of the brewery, and, as sometimes happens with divorcees, it moved in with a former rival. Hotaling bought the Distillery No. 209 facility, but not the 209 Gin brand. Vintage Wine Estates, whose CEO Pat Roney was 209 founder Leslie Rudd’s winery partner, took control of the brand.

The Junipero stills moved across town to share space with Rosie, the Forsyths pot still on which Distillery No. 209 Gin has been made since its inception. With the exception of Russian bootleggers counterfeiting booze on factory ships in the Baltic Sea, Rosie may have been the only gin still over the water… until its two smaller friends moved into San Francisco’s Pier 50.

Under construction at the time of writing but slated to be complete by publication, the Junipero and 209 stills will work side by side with their original distillers on Pier 50 creating distinctly different world-class gins in the same facility. While Junipero is a classic, juniper-forward gin with peppery touches, 209 Gin is contemporary in style, with lemon, sweet orange and bitter orange supporting the juniper along with angelica, bergamot, cardamom, cassia bark, coriander and orris root. Distillery 209 also produces a three-strong range of wine barrel-finished gins: Cabernet Sauvignon, Chardonnay and Sauvignon Blanc.

Honouring its CEO’s former business partner’s legacy, VWE is taking an ‘It ain’t busted: don’t fix it’ attitude toward 209 Gin. It continues being made on the original still in the same location by the man who created the recipe, Arne Hillesland.

Hillesland was hired in 2003 as an inexperienced production assistant on the basis of his bold cover letter that proclaimed, “Gin fueled the Jazz Age. Gin is the spirit of America for innovation and fun.” The person slated for head distiller left the company while under construction, and Hillesland received a battlefield promotion. Distillation began and Hillesland developed 209’s recipe in 2004.

“Our first bottling took place on the solstice, on June 21 of ‘05, and there happened to be a Giants’ game going on with fireworks,” explained Hillesland. “So, fireworks were going off over the distillery as we were bottling our first run of 209 Gin. It’s kind of a memorable occasion.”

A short distance across the bay, St. George Spirits makes three styles of gin. Distilling eaux-de-vie since the 1980s, St. George created and then sold Hangar 1 Vodka, producing the capital to pursue creative projects such as the first modern American absinthe and single malt American whiskey.

Arguably the first craft distillery and certainly the first of the craft resurgence to show bartenders, consumers and other distillers how to have more fun by opening tasting rooms, bottle shops, cocktail classes and party rooms, St. George became the epicentre of the craft movement in the aughts. Until the statute of limitations expires, there are many stories of US Bartenders’ Guild parties there that are best not repeated.

St. George makes four exceptional gins. Botanivore Gin, with 19 botanicals, is herbaceous and floral, soft and complex, excellent in a gin and tonic. Terroir Gin combines contrasting elements of roasted coriander with Douglas fir and bay laurel to recreate the aromatics of hiking a dusty trail through the evergreen forests of the Coastal Range. Dry Rye Gin dials the botanicals back and, like genever, lets the base spirit imprint on the flavour profile, while Dry Rye Reposado Gin is the same distillate rested in barrels, like an ‘oude genever’. Both Dry Rye Gins add a new dimension to whiskey cocktails.

Heading north from the San Francisco Bay into Napa County leads to exciting new producer Loch & Union. Founded by friends who attended Scotland’s Heriot-Watt University together, Loch & Union is a study in how to fit great distilling power into a small and inconspicuous industrial space. Located in wine country, they distil mostly grain as the base for their gin.

Co-founders Matthew Meyer and Colin Baker met while studying at the London School of Economics. Then, while earning a master’s in brewing and distilling at Heriot-Watt, Baker befriended several people who later joined the distillery.

“We ended up living together for almost two years in the same house,” said Baker. “And you know, live together, work together and didn’t kill each other – I think says a lot about how well we get along, right?”

Their American Dry Gin, based on GNS (grain neutral spirit) and using 12 botanicals, is a clean, well-balanced classic gin. Of Loch & Union’s Barley Gin, which is distilled from single-malt whiskey fermented and distilled on-site, Baker said, “It has the same botanicals, just a different base spirit. So you can see, when you taste the American Dry Gin versus the Barley Gin, how big of a difference the base spirit makes.”

Between American Canyon, Loch & Union’s home, and the North Coast, a plethora of fine gins are being made. Sonoma County’s Petaluma boasts Griffo Distillery, which makes a line of spirits including gin, whiskey and vodka.

Also made in Petaluma is Gothic Gin, which entered the market in mid-2019. CEO and founder Chris Klug developed the recipe in 2018 at a gin workshop in Barcelona, Spain. “We follow the London dry gin tradition,” said Klug. “Gothic Gin also does two unique processes with eucalyptus and a vapour infusion of Valencia orange peel that really set this gin apart.” Gothic Gin is available in 48 states and Australia.

Continuing west to Sebastopol, the husband-and-wife team of Timo and Ashby Marshall runs Spirit Works Distillery, named Distillery of the Year 2020 by the American Distilling Institute. Spirit Works Sloe Gin, made with steeped sloe berries, is an exceptional American-made gin. Lightly sweetened, the tart berry flavour shines through without being cloying.

The highway west leads to the coast. Along this edge of the state, locals use the term North Coast to describe the oceanside north of where they live. In remote Humboldt County, known for decades as a premier cannabis-growing region, there is no point in distinguishing North Coast: it surrounds you. Most of California’s 770-mile (1,240 km) length is south from there.

In the delightful retreat of Arcata, Alchemy Distillery is saving the world, one bottle at a time. Owners Amy and Stephen Bohner, whose Alchemy Construction built the distillery, spend an unusual amount of time wondering how to make their community (and the world) a better place and acting on their impulses.

They distil whiskey out of day-old bagels, which would otherwise be wasted, contract local farmers to grow heirloom grains for their spirits, feed spent grain to local pig farms and strive to be a zero-waste facility. An abundance of goodwill and fun surround the Bohners in their pursuits, including their Boldt line of spirits.

Boldt Genever Style Gin is made from one of Alchemy’s clear whiskeys with a mash bill of 100 per cent locally grown hard red wheat. The grains and botanicals – including juniper berries, coriander, cubeb berries, star anise, cassia bark and orange peel – are stone-milled in-house. The addition of redwood needle tips and three “top secret” ingredients lend uniqueness to this spirit, which is barrel aged for about three months.