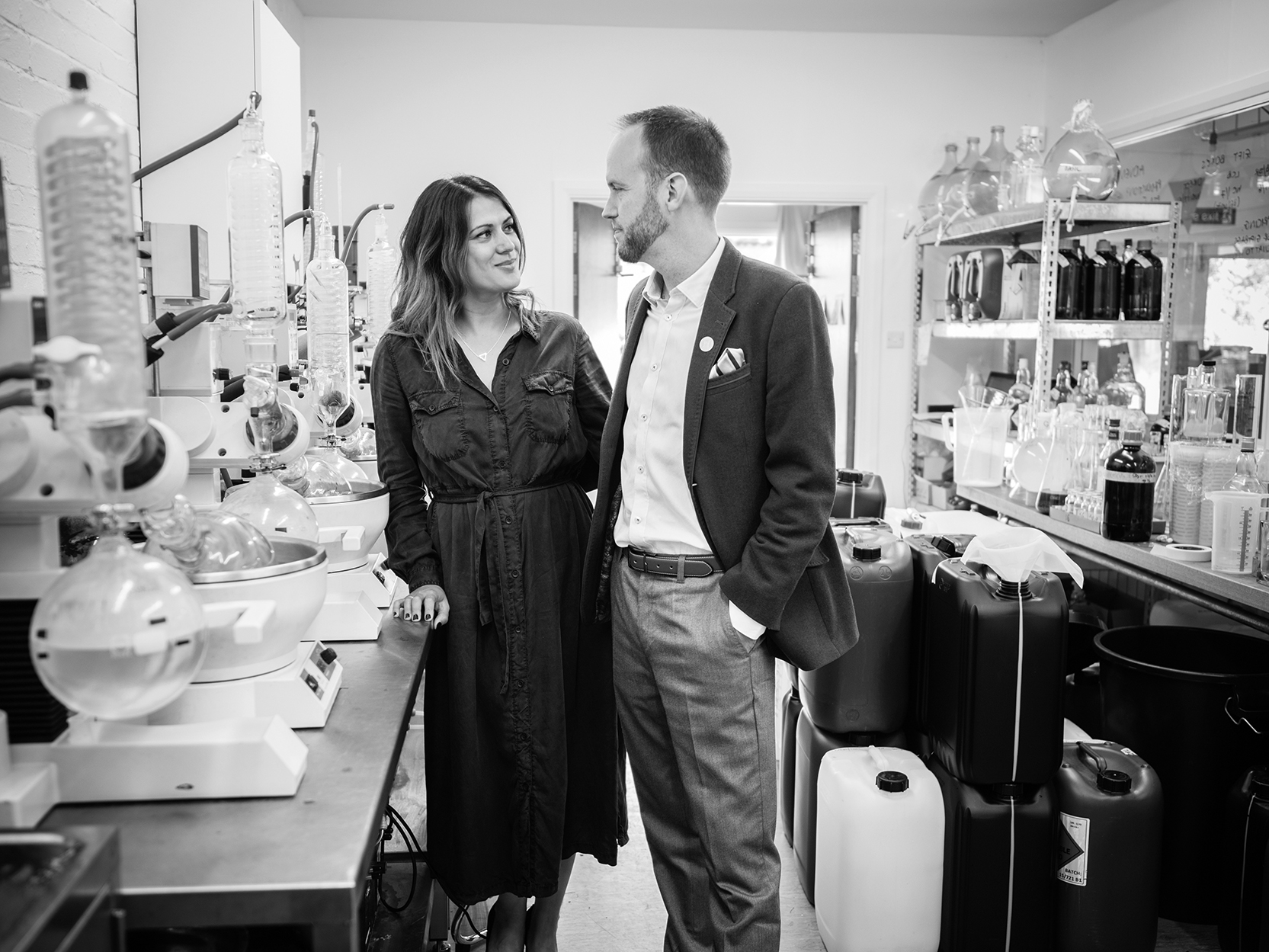 For Cambridge Distillery, seasonal produce and culinary experimentation are key pillars in its gin distillation

“If you go into a kitchen and tell the chef that they can only have one pot, that they have to put all their ingredients in it at the same time, cook them at the same temperature and for the same amount of time… well, that’s incredibly restrictive.” This is how former bartender and drinks educator Will Lowe describes how he saw most gin being made before he, along with his wife and business partner Lucy, decided to embrace gin making and founded Cambridge Distillery nine years ago.

As a chef’s new dish results from the combination of different ingredients and preparations, Lowe’s gins are created by the process of distilling each botanical individually, then blending those elements together at a later stage. “We set about finding the ideal conditions for every single ingredient that we use. Clearly things aren’t in flower, ripe or available all through the year,” he explains, “so if we distil them fresh individually we get rid of that problem. We then hold that as liquid stock rather than as dry goods. By distilling the botanicals separately, we find the best conditions for all, rather than aim for the best average quality of each ingredient.”

Since the distillery’s inception, maximising the potential of fresh ingredients has played a key role in Lowe’s search for the apogee of flavour expression. For him, such a process must account for vintage variation, a concept that was certainly inspired by his wine studies (he was recently awarded the Master of Wine, one of the industry’s highest accolades).

Launched during Cambridge Distillery’s early days, Seasonal Gin is a range of distillates designed to capture the botanicals’ ephemeral, seasonal uniqueness. Released every six months, the Spring/Summer iterations are made with ingredients sourced in the first half of the year, the Autumn/Winter expressions with botanicals from the second half. “Once they’re done they’re done,” says Lowe, “and never to be repeated.”

Lowe’s attempt to capture seasonality and vintage variation has recently climaxed into the Three Seasons project, set to be launched in the summer. It’s an elegantly perfumed distillate whose leading botanicals – lemon verbena, rose petals and blackcurrant leaf – represent Cambridge’s three main foraging seasons, spring, summer and autumn respectively. The botanicals have been tailored to unveil ‘chronologically’ on the palate, according to the order they would appear throughout the year. “The lemon verbena, rose petals and blackcurrant leaf will all be on your palate at the same time, but you’ll adapt to them at different speeds,” explains Lowe. “The first is an immediate yet brief flavour, meanwhile, as that recedes, rose blossoms on the mid-palate and once that’s gone you finally get blackcurrant leaves.”

With the 2014 release of Anty Gin, Lowe took his research on the extraction of flavour to the larder. The gin is a rather unique and innovative distillate made from formica rufa – or red wood ant – essence, an ant species that can spray formic acid from its abdomen as a form of self-defence.

The idea originated from chef and Edinburgh Food Studio co-founder Benedict Reade, who at the time worked at the Nordic Food Lab (today the Future Consumer Lab), a research centre associated with the world-renowned Noma restaurant but part of the University of Copenhagen’s Department of Food Science. “The initial idea was based on two observations,” explains Lowe, “all gins have a citrus character to them and some ants have a citrus flavour, too.” To make the gin, the citrus flavour was extracted by the ants’ formic acids, which are soluble in both water and alcohol, “so it’s an ideal candidate for distillation”.

“The lab sent some ants they had collected to us here in Cambridge; we distilled them and we were able to extract that citrus note. We managed to produce a very convincing flavour. A very high-effort, low-yield endeavour,” admits Lowe.

With the purpose to capture an entire ecosystem rather than a single flavour, the Cambridge-Nordic Food Lab collaboration went back to the ants’ natural environment to source the remaining botanicals – stinging nettle, wood avens roots and alexanders seeds – which Lowe believes had never been used in a gin before. Anty Gin was first presented at Pestival, an international event dedicated to highlighting how insects are critical to human life. Lowe explains, “The intent was to shine a light on insects as a potential source for both food and flavour and for deliciousness, and it was very effective. We first did the Anty Gin on a very small scale but had such a great reception that we decided to make it more widely available and released it to the public in 2014.”

If the Anty Gin was aimed at shedding light on a misunderstood food source, Lowe turned to a more traditional ingredient to push the boundaries of gin’s drinking occasions. “I was in a two-Michelin star restaurant having dinner and the digestif trolley arrived,” he recalls. “I wanted a gin but I saw none on the trolley. The sommelier laughed at me and said, ‘Of course there isn’t one, no gin is good enough for this.’ I thought it was rather rude at first, but then I realised he was right. When he said ‘good’ he just meant ‘fit for purpose’ – gin is intended as an aperitif because of its mouthwatering, refreshing nature.”

Lowe began speculating whether he could make a gin that was suitable as a digestif. With the trolley full of dark spirits – “whiskies and Cognacs the same age as me and even older” – the first step entailed stereotyping a dark spirit tasting note: leather, smoke, tar, chocolate, forest floor, “all that kind of thing.” To achieve those flavours, however, he decided to reverse-engineer the liquid by “distilling the tasting note” itself, rather than barrel aging the gin. “There are carcinogens involved when using tobacco, and cocoa without sugar tastes really bitter. So I boiled it down to one part of that ‘forest floor’ descriptor.”

Lowe selected white truffle from Alba, Piedmont, and devised a gin whose flavours would give the illusion of a dense, unctuous, mouth-coating spirit. “Truffles are very difficult to work with both for the chef and the distiller. It’s always served on food that is relatively simple, plain, because it smells more than it tastes, which is the opposite of juniper and difficult to control in distillation. [It’s] one of the hardest things I’ve ever had the pleasure to work with. Eventually we found a very fine landing space, where the gin smells predominantly of truffle but tastes predominantly of juniper.” The result is a clear distillate that, poured over ice, can sit comfortably on the dining table as an after-dinner drink.

The kitchen metaphor that motivated Lowe to venture into gin production, the utmost respect for the seasonality of the ingredients and quest for maximum aromatic expression are consistently captured in Cambridge Distillery’s bottlings. Lowe’s approach to distillation leads him to constantly refine tasting skills and knowledge. Just months after receiving his MW title, he’s now embarking on a PhD programme at Cambridge University’s Department of Chemical Engineering and Biotechnology with a project on the concept of ‘quality’ in wines and spirits. “The subject is a natural progression from my MW dissertation,” he says.

It is another step in his mission to unveil the secrets of flavour expression, which allows him to consistently turn botanicals and alcohol into perfumed distillates that push the boundaries of what gin can be, illustrate and communicate.

0 comments on “Philosophies of flavour at Cambridge Distillery”