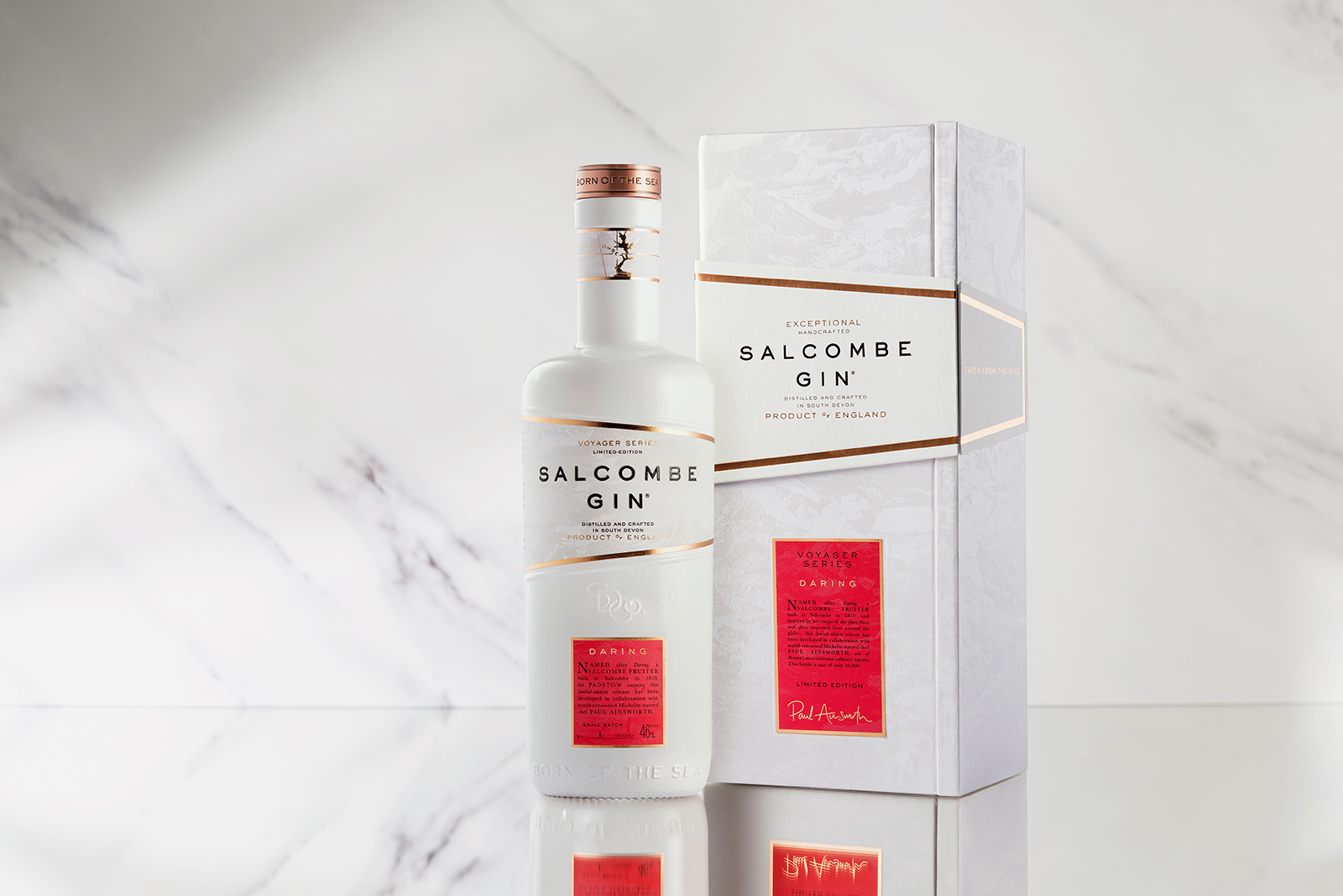 The new gin has been created in partnership with celebrated chef Paul Ainsworth. It is inspired by his Cornish oyster dish, ‘A Tale of Porthilly’, which is a signature dish at his Michelin-starred Padstow restaurant Paul Ainsworth at No6.

Daring has been developed to mimic the smooth mouthfeel and umami character of oysters, as well as the fresh, zingy flavours of their accompaniments on the dish. It launches on 16 April, with a limited release of 10,000 bottles.

To create the release, Salcombe’s gin makers crafted a base spirit with milk whey (to give the gin a creamier character) and blended it in a 65:35 ratio with an English wheat spirit. The resulting liquid was distilled with 14 hand‐selected botanicals, including fresh fennel, Cornish apples, seaweed, blood orange and fresh lime, then blended with seaweed and oyster leaf distillates.

It is the seventh release in Salcombe Gin’s Voyager series, in which spirits are created through collaborations with world-renowned chefs and winemakers. Previous releases include Arabella (with Michael Caines), Phantom (with Château Climens) and Island Queen (with Monica Galetti).

Angus Lugsdin, co-founder of Salcombe Distilling Co., said: “With our shared love of the South West and the rich abundance of flavours the region has to offer, it has been a privilege to work with Paul and his team to create this unique gin.

“‘Daring’ not only takes its name from a Salcombe fruiter, but reflects our shared approach to create a gin inspired by the Cornish coast and designed to mimic the flavours of Paul’s world-class dish, ‘A Tale of Porthilly’.

“Celebrating the Cornish oyster, this simple dish provided the perfect inspiration for the gin, allowing us to push the boundaries of distillation, explore the use of some unusual botanicals and balance all the elements whilst making use of a by-­product from the dairy industry.”

Paul Ainsworth said: “Creating ‘Daring’ with Salcombe Distilling Co., as part of the limited-edition Voyager Series, has been a fascinating journey of discovery. Living here in Cornwall, we wanted to evoke a sense of being by the sea and include local flavours and botanicals that we enjoy in our restaurants.

“The name ‘Daring’ recalls a time when our quaint fishing village of Padstow was a thriving merchant port, whose ships transported spices all over the world… It is also the perfect word to describe the driving force and ethos of The Ainsworth Collection.”