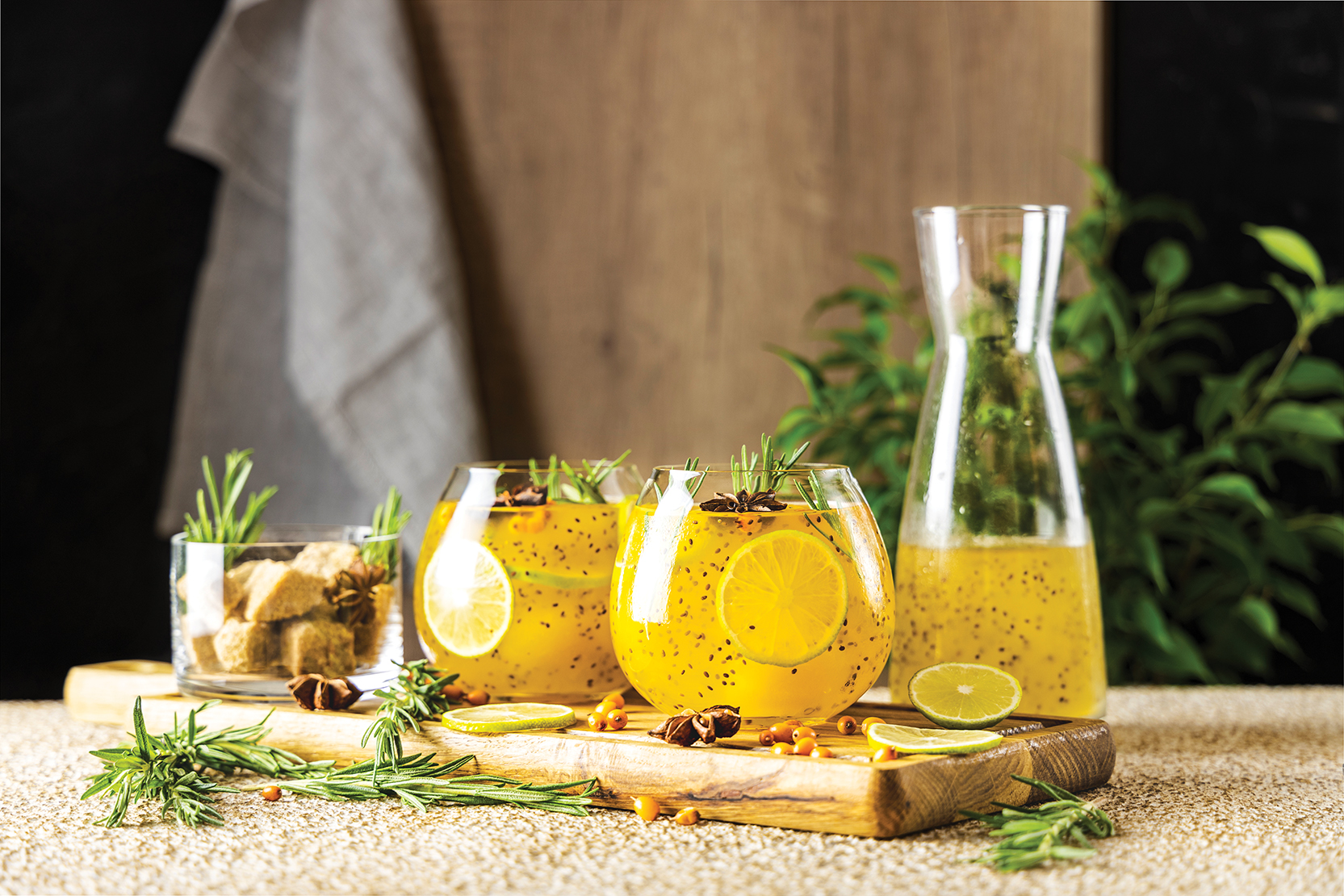 Who says you can only serve gin with tonic? We look at some alternative mixing partners

Salt and vinegar, bacon and eggs, peanut butter and jelly are all classic combinations. When it comes to juniper spirits, the classic combination has got to be gin and tonic – a delicious and easy-to-mix staple for more than a century. But what if you fancy a change? In this article, we’re going to explore alternative mixers that you can try with your favourite gin.

Ginger ale is a slightly less prevalent, but not outlandish favourite. Simply combine with gin and some lemon juice and you have a Gin Buck, or – if you prefer a more fiery ginger kick – there is the Gin Mule, a take on the Moscow Mule that’s made with ginger beer and lime. Gin and lemonade is also increasing in popularity, particularly with fruit gins.

But what other options are there?

The name “cream soda” was originally a reference to “cream of the crop”, meaning “the best” (in a similar way to cream sherry). Cream sodas were created by soda jerks in the late 19th century and often had ingredients like milk, ice-cream, or eggs.

Modern-day cream sodas are generally quite sweet with lots of creamy vanilla flavours. They tend to pair well with spiced gins or even aged gins. Typically it’s helpful to use tart citrus as a garnish to balance out the sweetness.

Muddle raspberries in the bottom of the glass, add gin and then ice, top up with the cream soda and garnish with more raspberries to finish.

This drink has a trifle-like quality and as Sherlock Holmes once said, “there is nothing so important as trifles”. The raspberries add a pleasant tartness that balances the cream soda without overwhelming the gin, making for a tasty and indulgent drink.

Root beer is an American soft drink flavoured with a number of roots, such as ginger, sarsaparilla, birch and sassafras. Modern root beer traces its history back to 1876 and Philadelphian pharmacist Charles Hives. A similar-tasting UK product, Dandelion and Burdock, was first bottled in 1898 by Ben Shaw, although the combination of the two plants dates back even further to 1297 and tales of St. Thomas Aquinas.

Both products are sweet, with earthy, rooty flavours and characters somewhat reminiscent of anise. These botanical flavours work well with gin, especially those with a herbal or savoury character such as Gin Mare.

This is a very simple mixer to make at home, but if you prefer to buy your mixers ready-to-use, it’s worth nothing that pre-bottled versions can be extremely sweet and can have lots of extra flavours added to them.

My suggestion is to keep it simple and make some tea at home (you can brew a large batch in a heatproof jug or saucepan) and then ice it (i.e. add plenty of ice). This method allows you to sweeten it to your liking (see the Ask an Expert question on page 82) and provides a vast range of different flavours to experiment with. In our household, we usually use Yorkshire Tea, but for a touch of additional citrus-forward, floral elegance you can try Earl Grey.

Most teas work notably well with gin, especially full-flavoured gins with bold botanical flavours where the gin character can still be appreciated. Fruity gins such as Gordon’s White Peach or Warner’s Raspberry mix well with tea and add a little sweetness. Citrus makes a good garnish for iced tea and it’s also a wonderful drink to make up in a jug or pitcher for sharing.

Lilt (or other tropical soda)

Lilt is a carbonated drink with a mix of pineapple and grapefruit flavours and a fruity, bittersweet character. It complements gin well, in particular anything citrus led, leafy, or classic gins with a generous amount of juniper. The combination of gin and Lilt takes on greater depth when you add a splash of Green Chartreuse, which marries well with pineapple.

Now for a controversial subject in the gin community! The use of cola as a mixer can divide gin fans, but when you take a moment to consider what cola is flavoured with – things like vanilla, citrus, cinnamon, and the kola nut – a lot of these sound like, and in fact they are, gin botanicals. In many ways, cola is a botanical soda.

Some drinkers may also be put off by the perceived sweetness of cola, but if this is a concern, I’d suggest giving it a try and adding a splash of cranberry juice to the drink. This “Carter Cola” was created by Sam Carter of Laverstoke Mill and is a splendid combination on its own, with gin, and with other spirits, too. I like to mix 2-3 parts cola to 1 part cranberry juice and 1 part gin.

When it comes to the gins, a classic, juniper-forward gin works well, as do spiced or citrus-forward gins. Old Tom, sloe and aged gins also work well with it – pretty much any gin that has enough flavour to hold its own against your cola of choice!

And there is a substantial amount of choice when it comes to colas. Beyond the big brands, Fever-Tree makes an excellent one using Madagascan vanilla and Artisan Drinks makes a barrel-smoked variety. Coca Cola released a range of bartender-inspired colas last year. Of these, I would recommend Coca Cola’s Herbal (#3) as being of particular interest for gin fans; it works well with leafy-citrus gins such as Cooper King, Gin Eva, and Warner’s Lemon Balm.

Orange and other citrus sodas

There is a great range of orange sodas from Fanta (originally produced in Italy in 1955), the French Orangina (both original and blood orange versions) and – a firm favourite of many – San Pellegrino.

When combined with gin, it makes a drink that is delightfully summery. I would recommend serving it “Gin Tonica” style with plenty of ice and a fresh citrus garnish – you’ll feel like you’re sippin’ on sunshine!

Other citrus sodas include Fanta Lemon, which is notably popular as a gin mixer in Spain and the Balearic Islands; it also mixes wonderfully with sloe gin. The Double Lemon from Double Dutch has a similar character, but with the added bitterness of quassia bark. Finally, there is Ting, a grapefruit-flavoured soda that comes from the Caribbean.

If you struggle to choose between orange and cola, then consider a combination of the two, also known as Spezi or Mezzo Mix; the latter has the tagline, “Cola küsst Orange” (“Cola kisses orange”). If these are unavailable, you can always make your own by mixing 2 parts cola to 1 part sparkling orange – Orangina or San Pellegrino are good choices.

The orange flavours provide a bright, fresh, and zesty character, whilst the cola brings some spiced complexity. When mixed with gin, there’s a pleasant balance in all these flavours; this is a really unusual drink, but well worth a try.

Yes, ice-cream! Not all mixers come in bottles or cans; some come in tubs and cones. The drinks outlined below take their inspiration from The White Cargo, a cocktail that is probably named after the 1923 play by Leon Gordon. The drink first appeared in print in 1927 and combines gin, vanilla ice-cream, and a splash of white wine.

The versions below have dispensed with the wine, but instead allow the drinker to experiment more with flavours from the ice-cream itself. There is even a way to lengthen the drink if desired: simply pour into a tall glass and slowly top up with sparkling water, before serving with a straw.

Combine 50ml gin and 1 large scoop of ice-cream in a cocktail shaker. Shake and strain into a cocktail glass. Garnish with grated chocolate or a pinch of nutmeg.

This is a fantastic dessert cocktail: rich and indulgent. The ice-cream gives it a rich texture and the aeration from the shaking provides a little fluffiness. For an extra flair, add a splash of maraschino cherry liqueur before shaking.

Incredibly decadent: reminiscent of melted chocolate mixed with gin, and the dark cocoa flavours work well with the gin’s botanical notes. This is like having a dessert, coffee, and after-dinner chocolate all rolled into one.

These are just two examples, but there are as many possibilities as there are types of ice-cream (mint choc chip doesn’t really appeal, but who knows?). For those who like things a tad tart, try a scoop of sorbet instead.

It’s worth emphasising after this exploration that there is nothing wrong with tonic water! However, if you fancy a change, hopefully this has provided a little inspiration.