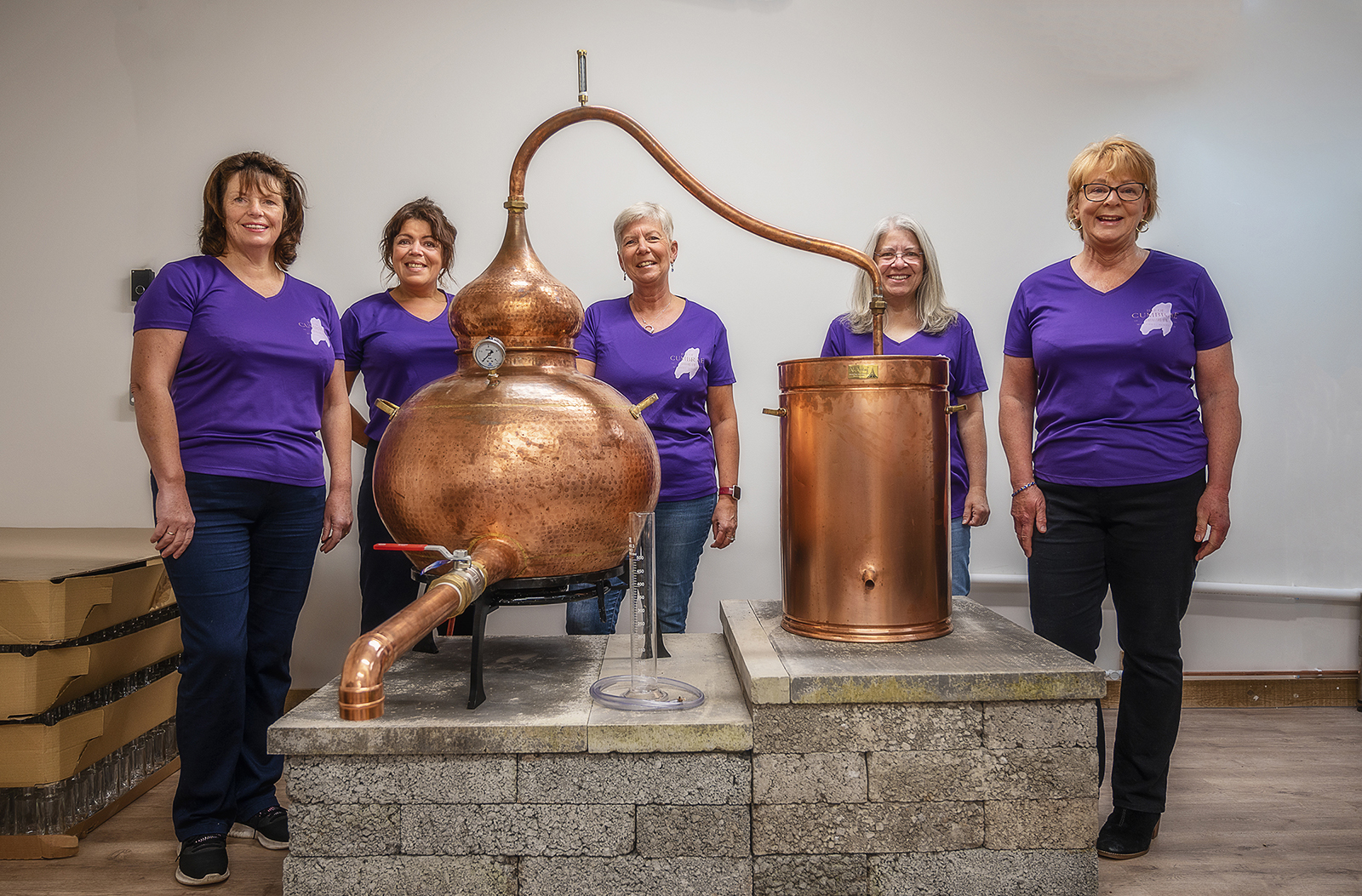 It started with a plan to raise money towards a new town hall – but the team behind Isle of Cumbrae Distillers now have their sights set on bigger goals.

The all-female team behind the distillery, who have known each other around 18 months, came together in a bar with a shared love of gin and the idea to do something to help their island community, off the west coast of Scotland.

Fast forward to 2021 and they have successfully launched their gin, Nostalgin, and are working on new releases and a tourism initiative with other island distillers in the area.

The Isle of Cumbrae Distillers co-founders – Bronwyn Jenkins-Deas, Jenine Ward, Juli Dempsey, Philippa Dalton and Lynda Gill – initially met to discuss fundraising for the renovation of Millport town hall. Bronwyn explains, “The more gins we had, the more we thought someone should open a distillery and at the end of the evening we said we should look into it.”

Together the women put together a business plan – Bronwyn admits they were ‘naïve’, but she believes this worked to their advantage. “We decided to open the company right away because we were not in the position that we had to do it for a living, it was something to keep us occupied,” she says.

“We are five older women who are international; none of us is Scottish, our husbands are. We don’t look like anything else in the distilling industry.”

At around the same time, the nearby Bute Distillery had submitted a proposal to open a small facility on Cumbrae. Rather than going into competition, it agreed to help the Isle of Cumbrae team set up their distillery and supported them with everything from recipe creation to label suppliers.

“They offered to act as a cuckoo distillery for us,” explains Bronwyn, “so we would go out on a boat to Bute to distil with the distiller there. We had an amazing year with Bute mentoring us.”

While 2020 was not the easiest year to launch a business, Bronwyn says it gave the Isle of Cumbrae team time to ‘slow down’ and ensure they launched Nostalgin properly. This finally happened in September 2020, just over a year after the team met for the first time.

Nostalgin is designed to reflect the sense of separation and solitude that its island home can give visitors (despite Cumbrae being Scotland’s most accessible island, only eight minutes from the mainland by boat). Its botanical mix includes local blackberries (brambles), milk thistle and heather. Following their early coaching with Bute Distillery, the five women now make the gin and devise new recipes themselves.

Bronwyn says the gin has been further ‘Scottified’ with a tartan pattern on the bottle (the distillery’s own tartan, which it has officially registered). The team plan to start tours and tastings at their distillery in summer 2021 and are currently working on their second gin, which will honour Cumbrae landmark Crocodile Rock.

They are also working with distilleries on Bute and Arran to launch a ‘gin passport’ for the Clyde Islands (which the three islands are collectively known as). The scheme, expected to launch in April, supplements local tourism research the distillery has been doing with students from the University of Strathclyde.

Bronwyn says, “We think this year will be a boom time for local travel so we are going to try and capitalise on that idea of exploring your own region and meeting the people who are involved in gin distilling locally.”

But what about Millport town hall, you ask? In the end, it secured a grant for renovations – but Isle of Cumbrae Distillers will be making a gin to support it, and also hopes to set up a gin school in the town.