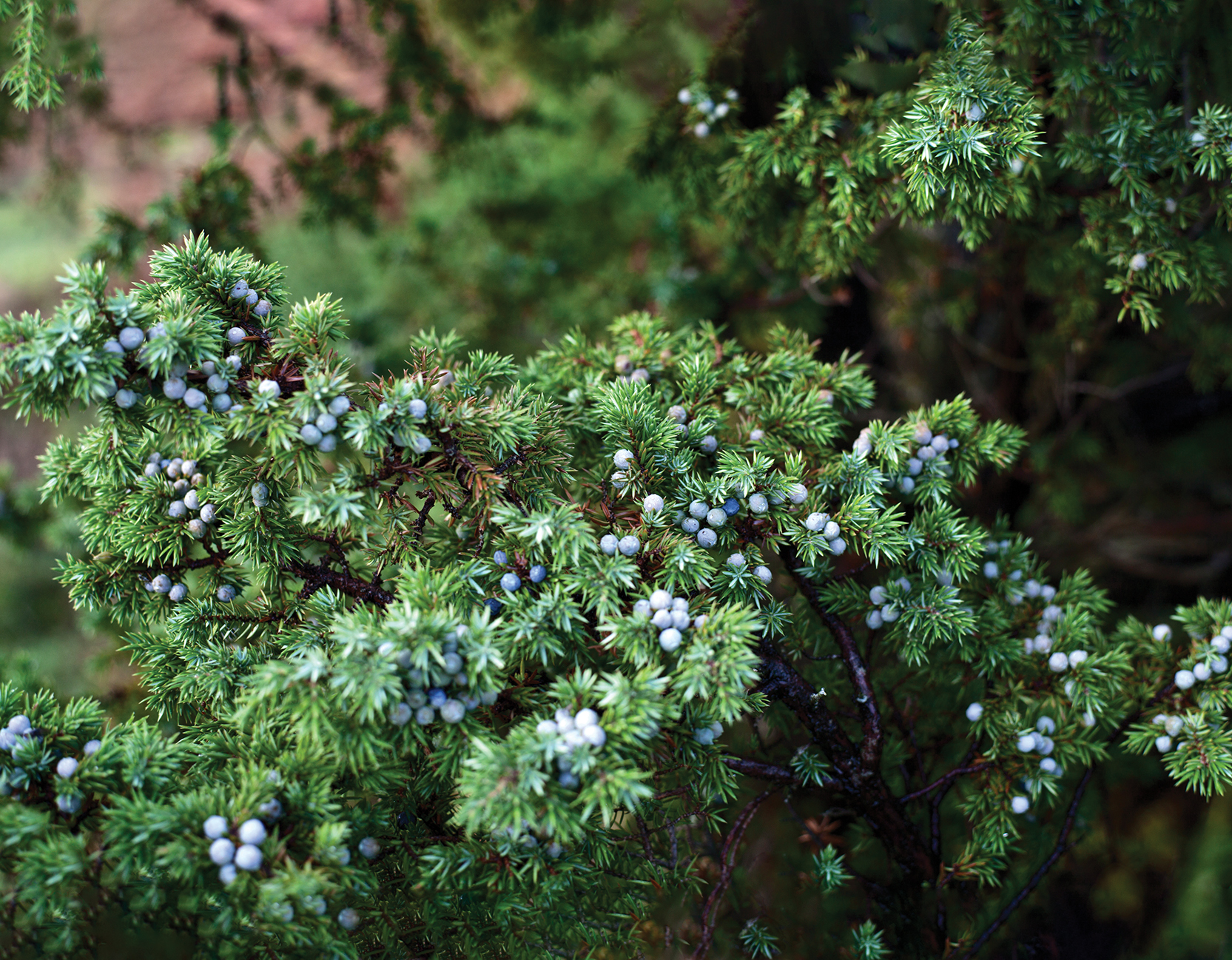 Gin just isn’t gin without juniper. Yes, legislation says a gin must be juniper dominant, but it’s more than that. With its distinctive piney, resinous aroma and taste, it is the very heart of what gin is, and the hallmark of this distilled spirit over any other.

Whilst juniper berries are the key ingredient for a delicious gin, the juniper tree is also an ecologically important species in the UK. A native conifer that can be traced back to the last ice age, they’re pretty hardy under usual circumstances, living for up to 200 years.

The largest populations of juniper can be found in the north of England and Scotland. Where once there were huge swathes of the UK where juniper grew, the number of natural sites is currently at an all-time low, rendering it one of our rarest native trees.

There are a number of reasons for this decline. As a pioneering species that spreads and explores, and paves the way for other plants and trees, attempts to contain juniper to stop it getting into land earmarked for other uses have hurt its potential. There are cases where the land has been managed poorly, with agricultural animals left to roam, sites entirely cleared for farming, and overgrazing from wild animals like deer and rabbits in areas where their natural predators have been removed by hunting or farming.

However, the single biggest threat to juniper is the presence of Phytophthora austrocedri – a fungus-like organism which infects and kills the juniper trees.

Phytophthora is a family of organisms that have affected the health of plants around the world throughout history. The potato famine in 19th-century Ireland was caused by a species of Phytophthora. It lives in the soil, transferring through the movement of water and infected soil by animals (or humans, through the mud on our shoes).

The particular strain that affects UK junipers is Phytophthora austrocedri. Like all Phytophthora, once a plant is infected, the fungus damages the root and stem, affecting its ability to take water from the ground, starving the plant of water and nutrients and ultimately leading to its death.

Phytophthora austrocedri has been found on around 100 sites in the UK since it was first identified by Forest Research back in 2012, and is monitored by organisations like the Animal and Plant Health Agency (APHA), which considers the issue widespread. While bushes that have been infected for some time are easy to spot by the browning of their foliage and dieback (progressive death of twigs, branches, shoots, or roots), early infections are difficult to spot as the lesions form under the bark.

Andrew Kirkwood, plant health and seeds inspector at the APHA, regularly visits sites to inspect the juniper plants and gauge the level of spread.

“[Juniper] trees that were only showing slight signs a year or two earlier are now absolutely dead when you revisit,” says Kirkwood. “As a fungus, it’s very lethal.”

Evidence shows that Phytophthora austrocedri has been here in the UK for some time – estimates are around 30 years. Though only properly identified in 2012 there was clear evidence well before then that populations of junipers were diminishing, and initiatives were put in place to try to help.

In the late 1990s there was a campaign to bolster the juniper populations by collecting seeds from juniper plants, growing them in nurseries, and then replanting them in the wild. While well intentioned, Kirkwood is sure that this increased the rate of the pathogen’s spread, as infected and healthy plants were mixed.

Sarah Green, forest pathologist and programme manager for Forest Research, points to the discovery of Phytophthora austrocedri in plant nurseries across Europe as the key indicator.

“[Phytophthora austrocedri] seems to be fairly well established in the trade, and that’s the problem,” says Green. “Conservationists collected seeds, contracted out to a nursery to grow them, then a few years later they plant the junipers back out at the site. We have anecdotal evidence that a good number of the sites where they’ve been planted in this way have subsequently started showing symptoms.”

Due in part to research such as this, it’s no longer recommended to plant junipers from unknown sources. Green’s message could not be clearer: “Do not plant on any site where the juniper is viable.”

Once an infection is identified, there are measures that can be taken to reduce the spread and to contain the infected plants such as cut-outs, burn-outs and ensuring good drainage where possible.

Within EU law there is a legal requirement to manage and maintain populations of juniper, something the APHA is confident will continue to be observed here, though responsibility to manage the juniper ultimately falls with the landowners. There’s also a nationwide ‘Keep It Clean’ initiative to help reduce the spread of soil-based pathogens like Phytophthora austrocedri. Its advice is simple: clean the mud off your boots or bike tyres before you head home or travel between areas.

Studying the infection has revealed evidence of healthy trees which seem to escape the disease. The reasons for this are as-of-yet unclear, but one possible reason is that they are naturally resistant.

Green and her team at Forest Research, the first to identify Phytophthora austrocedri and how widespread it was in the UK population, have been given funding to conduct further work, including looking at natural resistance. They’ve taken cuttings from ‘survivor’ trees in highly infected juniper populations and grown them back in their controlled nursery at the Northern Research Station. After being exposed to the fungus in a quarantined greenhouse many trees remained healthy, showing promising resistance.

But do the survivor trees pass on this resistance to their offspring? This would be key to the future of juniper survival in the UK. The ‘Juniper Provenance Progeny Trial’ has been set up by Green and her team to investigate this, by taking seeds from healthy trees, growing them up and testing them to see if they contract the disease. If they show resistance like the plants in the first trial did, then this could be a further tool in the arsenal in the battle against Phytophthora austrocedri, where, “Seeds from these [healthy] trees can then be grown up and eventually, hopefully, you’ll see recovery of the populations.”

Of UK producers, perhaps no brand is as passionate about preserving local ecology as Hepple Spirits in Northumberland. Managing director and owner of the Hepple Estate, Walter Riddel, is very vigilant when it comes to biosecurity. “We have a policy of not moving anything soil based onto the estate, whether that’s trees or shrubs,” he says. “There’s even a high health status herd of cattle that remains on the land that doesn’t get moved on and off. It’s about being careful where we can.”

Whilst Hepple is replanting junipers back into the wild through its propagation programme, it does so with great care, taking Hepple-grown seeds, planting them into its own soil and growing them up itself.

Though the situation isn’t great for the native juniper, very little is currently used in gin production – most producers source their juniper from overseas. Junipers grown in sunny climates such as Macedonia and Croatia offer a different composition in oils (such as alpha-pinene and sabinene) that are generally preferred over those from the UK, not to mention the plants there are much more abundant.

For those producers who are using local juniper from the UK, such as Hepple Spirits, it’s often alongside an overseas product. Plus, the quantities per bottle are less than you’d think. In terms of berries per bottle, gin recipes tend to use 6-12g of juniper, which translates to around 50-100 berries.

Biosecurity may now be leaps and bounds ahead of what it was in the 90s, but it seems like Phytophthora austrocedri is here to stay. And while it may not affect many of the gins you enjoy, the pioneering species of British juniper has a legacy which should be protected. As Riddel says, “It’s survived here for so long, it deserves to be looked after.”

0 comments on “What is going on with UK juniper stocks?”