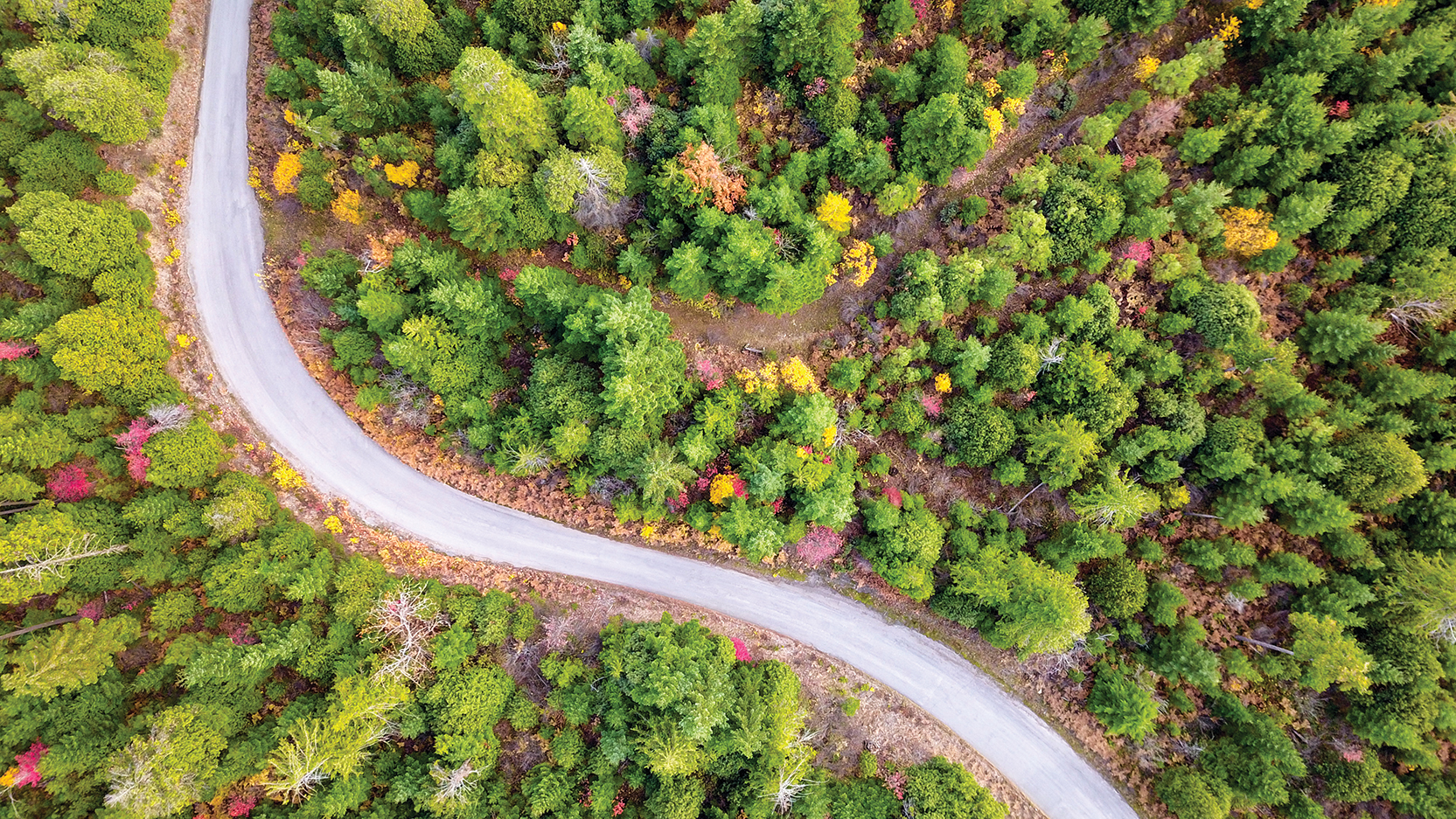 Our writer is taking a road trip around craft distilleries in the USA – he’s starting in Oregon, in the forested Pacific Northwest

What scene could be more evocative of sipping gin than walking through a green forest on Oregon’s brisk coast, with fragrances of pine and rain-drenched shrubs? It is a scent that has guided many of the Northwest’s distillers in making their unique gins.

Oregon occupies a landmass similar in size to the UK – 98,381 square miles, or 254,806 km² – but with roughly 6 per cent of the population. The lush farmlands of the Willamette Valley gave birth to vineyards producing world-class Pinot Noir. Portland has consistently ranked among the USA’s premier beer cities. It was natural that Oregon should be out ahead when the craft distilling movement started… last century.

Way back in 1996, Jim Bendis founded a rectifying operation in Bend. Bendistillery started producing a single-botanical spirit made with 100 per cent western juniper (Juniperus occidentalis) foraged from within 30 miles of the distillery. Crater Lake Prohibition Gin is produced in a style of the bathtub gins made during the Prohibition era.

“That juniper – particularly in the Prohibition-style gin, with the maceration which gets the full berry in there – is pretty earthy,” said Bendistillery CEO Alan Dietrich. “It has some notes of sage… The comment we hear most frequently is it smells like the high desert after it rains.”

Meanwhile, in the state capital of Salem, winemaker Tad Seestedt started working on licensing a distillery. He spent money saved for a down payment on a house to start a distillery, which he named Ransom Spirits after the amount of money it cost.

Seestedt started distilling brandies in 1997, then moved Ransom Spirits up to Corvalis, where it was joined in 2004 by House Spirits, in a rare arrangement of an alternating proprietorship. In spring 2005, the House/Ransom tandem moved up to Portland, into an area that would soon be known as Distillery Row, and where two world-class gins would soon emerge.

At the time, Ransom was making fruit spirits, which few people wanted to drink. Seestedt began reading the writing of cocktail historian David Wondrich and wondered, “Is that my old friend Dave Wondrich?”

“We hadn’t seen each other for 15 years,” said Seestedt. On a business trip to New York in 2005, Seestedt had lunch with his old friend and described the troubles he was having selling brandies and that he was considering making a gin. Wondrich told him he should consider making an Old Tom gin, which was something that bartenders of the nascent craft cocktail movement were reading about.

“Here’s this old, great friend of mine,” said Seestedt. “I just told him I’m dying financially, and he’s suggesting that I make a malty, brown gin. Nothing made me question our friendship or anything, but it kind of seemed like a crazy thing to do at the time.”

A two-year correspondence ensued. Seestedt sent samples to New York. Wondrich evaluated their cocktail worthiness until the balance of malt, juniper and barrel was just right. In 2008, Ransom Old Tom Gin launched, reviving a name and style that had gone dormant and reuniting them with classic cocktail recipes that bartenders were itching to make. Death & Co., PDT (Please Don’t Tell), and Clover Club picked up the spirit.

In six months, Ransom went from years of red into the black, a meteoric rise that not even the collapse of the New York Stock Exchange and the worldwide economic meltdown could stop. By the end of the year, Seestedt had bought a vineyard and moved the distillery to Sheridan, about an hour and a half southwest of Portland.

Concurrently, House Spirits was developing Aviation Gin. House Spirits co-founder Christian Krogstad began crafting a house gin for a local restaurant group. The idea morphed into seasonal gins, which House Spirits made using fresh local produce. Its publicist took a bottle to a party in Seattle, where it was shared with bartender Ryan Magarian, who was blown away by the concept of a new style of gin, one where the juniper was less dominant and the supporting botanicals came forward.

Krogstad and Magarian went through about 35 iterations before settling on a botanical list that included juniper, coriander, lavender, anise seed, sarsaparilla, two kinds of orange peel and cardamom. House Spirits still makes Aviation Gin, even though Krogstad and Magarian divested the label to Davos Brands in 2016, who sold it in 2018 to actor and producer Ryan Reynolds, who in August of last year sold it to Diageo for an estimated $610 million.

When House Spirits and Ransom Spirits shared a space, they banded together with New Deal Distillery to start Portland’s Distillery Row, a group of seven distilleries within staggering distance. Some places have joined and others gone out of business; the “row” has expanded to include all parts of Portland. The only founding member remaining within the geographical confines of the original Distillery Row is New Deal, which makes three gins.

In the early days, New Deal Distillery founder Tom Burkleaux put glasses of his gin “experiments” on the counter for visitors to sample and give opinions on. The two that people liked the most became Portland Dry Gin 33 and New Deal Gin No. 1, described as “a savory gin in the garden style”. New Deal has since added an Old Tom gin to its evolving portfolio of more than 20 spirits.

Other founding members of Distillery Row, Ryan Csanky and Erik Martin, saw their first distillery fail after the economic crash of 2008. “We made really good juice, we’re really proud of the juice that we made,” said Csanky. “Everything else we did was Erik’s and my first attempt at business, and we made every mistake in the book.”

“We were just learning how to make our mistakes. And now after going on 12 years, we make mistakes very well,” quipped Martin. “We make professional-level mistakes.”

The two founded Martin Ryan Distilling Company in northwest Portland, where they make Aria Dry Gin. In January they also launched a canned gin and tonic, and they seem to be running the business well.

“I can confidently say we are the fastest-growing individual spirits SKU at 750ml in Oregon,” said Csanky, “and the best-selling, locally distilled spirit that is not owned by a lovable Canadian celebrity.”

Three blocks down the street from Martin Ryan is Freeland Spirits, woman owned and operated, founded in 2017 by Jill Kuehler. The inspiration for the distillery was Kuehler’s grandmother, or Meemaw Freeland, who was the breadwinner in her family in a time when that was more uncommon than now. In particular, Freeland wanted the flagship gin to reflect Kuehler’s memories of working in Meemaw’s garden.

To make the gin garden-fresh and preserve the crispness of select botanicals, Freeland uses a rotovap for cold distillation and mingles those distillates with a gin distilled in a hybrid pot still. Freeland produces three gins: the flagship Freeland Gin, and their Geneva and Dry gins. The Dry Gin is bottled at 57% ABV because, as the website says, “We created a Navy Strength Gin, because strong gals deserve strong gin.”

And no story of Oregon spirits would be complete without mentioning McMenamins Edgefield, a place unlike any other. After founding a successful brewpub, brothers Mark and Brian McMenamin took a chance by buying a dilapidated 1911 institutional building in Troutdale, at the eastern edge of the Portland metro area. The McMenamin brothers renovated the former Multnomah County Poor Farm into a 100-room hotel, pub, brewery, winery, pizzeria, fine-dining restaurant, pool hall, pottery shed, glass-blowing studio, event centre, movie theatre and summer concert venue.

Gables Gin is made in a contemporary style at the CPR Distillery with a base spirit from organic wheat and a supporting botanical cast of coriander, orris root, grape root, sage, chocolate mint, rose and yarrow. Joe Penney’s American Dry Gin is made at the Edgefield Distillery using a potato spirit and complementing the juniper with sweet orange peel, lemon peel, freshly zested lime and cardamom. The spirits are sold exclusively at McMenamins properties, which have expanded to 31 locations in Oregon and Washington.

0 comments on “US gin road trip: Laying down roots in Oregon”