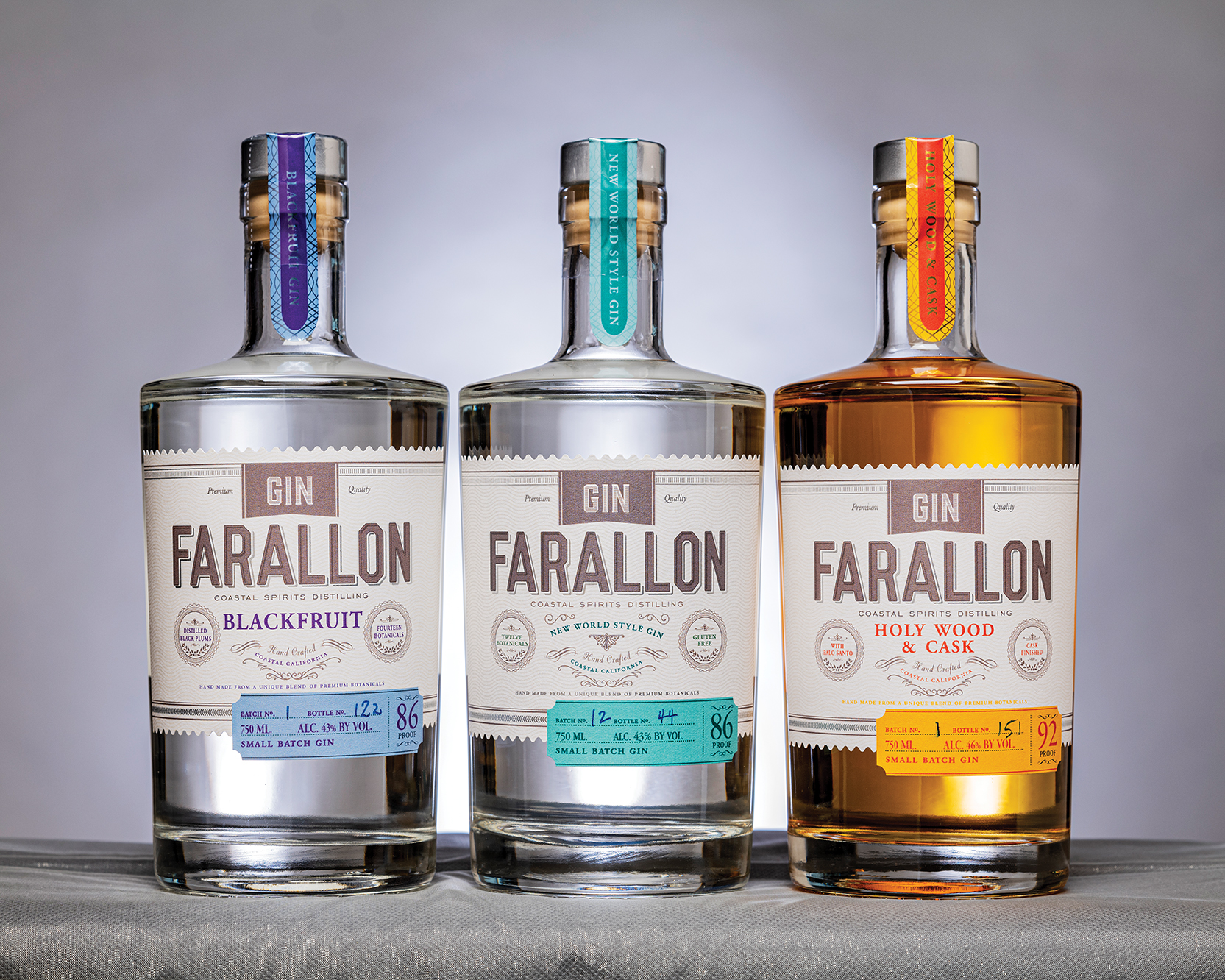 A palo santo-infused gin striking off into new territory

Palo santo is an aromatic wood known for giving off floral, vanilla, coconut and citrus impressions. Translating as ‘holy wood’, palo santo is burned for healing rituals by indigenous tribes in South America. Its fragrance is best known in incense, soaps, candles and essential oils. Now it has found its way into a gin, and an exceptional gin at that.

Gin Farallon Holy Wood & Cask is more than a gimmick. It is one of the more uniquely delicious and balanced spirits in any category to come out in this past year. The gin’s maker, Brad Plummer, first became aware of the holy wood from Palo Santo Marron, a brown ale made by Dogfish Head Brewery. Afterwards, he started detecting its character in a variety of products. “As I discovered this stuff, I wanted to find a way to get it into gin,” said Plummer. “But the palo santo does not work in the gin in any way like I thought it would. It does not contribute a huge amount to the aroma.”

Instead, Plummer found it works well to balance the oak notes in a barrel-aged gin. Working a palo santo maceration in combination with a gin aged in new American oak barrels, he searched for the right blend. “It was such a revelation,” said Plummer. “One of my partners and I were tasting through different blended samples and different proportions. Then we found one: it was just like, ‘Oh man, how has no one done this before? This is amazing!’”

It is a gin for certain – juniper-forward on the nose with resiny notes that cling to the sides of the tongue – but there are also strong undercurrents of creamy vanilla and oak. Floral sensations rise and expand on the palate, leaving a finish of citrus, coconut, hibiscus and pine. Adding ice dials down the oak to almost a dry style, but still leaves a light, lingering floral aftertaste.

Holy Wood & Cask shines in any gin cocktail that has a whisky counterpart: think Negroni/Boulevardier, Martini/Manhattan or sours. The tropical and floral notes make it a natural choice for the few tiki drinks that call for gin, such as a Singapore Sling, a Gin Rickey or a Suffering Bastard.

According to The New York Times, Brusera graveolens, or palo santo, grows in much of the “Americas, including Mexico, Peru, Costa Rica, Guatemala, Honduras, Galápagos Islands and plentifully in mainland Ecuador”. Brusera graveolens itself is not endangered and has been declared by the International Union for Conservation of Nature as “of least concern”. However, another species, Bulnesia sarmientoi, is also referred to as palo santo and needs protection because it is overharvested for furniture production.

Adding complication to the issue, certain groves of Brusera graveolens within Latin American countries have been declared endangered, and there is debate among botanists as to whether these groves represent subspecies.

In order for Brusera graveolens to gain its desirable characteristics, the tree must die of natural causes and remain in the ground for several years for the oils in the heartwood to mature. This significantly slows down the process of harvesting. Plummer sources his palo santo from Peru, where the wood is collected by a village which protects its own grove. “The economics of this are such that you could support a village on one tree for a long time,” said Plummer. “So, this is a sustainably harvested product, which I like.”

Holy Wood & Cask is one of three spirits in the Gin Farallon brand made by Coastal Spirits, a distillery Plummer founded in 2012 in San Carlos, California. Unlike many Americans, Plummer did not have a bad gin experience at university. In fact, the gin and tonic was his favourite drink.

“In college is when I started really getting into gin,” said Plummer. “It was my go-to spirit: the gin and tonic. Yes, easy to make and always tasty.”

Before he started a distillery, Plummer had wanted to make gin for a long time. About a decade ago, a co-worker came in with a box of plums from his backyard, asking if anyone wanted them. Plummer thought maybe it was time to start his distilling career by making some wine from the plums to distil into slivovitz.

He took the plums home and called San Francisco Brewcraft, asking for recommendations. They told him that before he did anything else, Plummer should read Ian Smiley’s Making Pure Corn Whiskey – a book that has launched dozens, if not hundreds, of US craft distilleries. Soon, Plummer was tinkering in the basement, converting a water heater into a still.

“The plums, in the meantime, I sweetened with sugar and fermented, then made plum brandy. And it was terrible,” said Plummer. “I ended up throwing that out – it was a learning experience.”

After a few years of playing with distillation in the basement, he set on making a gin recipe – and, at first, was equally disappointed. “I thought, you know, juniper, some plants, roots and berries, and off you go: put it in the still and out comes the gin,” Plummer began to chuckle. “But it turns out, out does not come the gin. Out comes something terrible.”

Through the long learning experience, he found that there were certain ingredients he did not want to work with. He began to dial in a recipe, landing somewhere between classic and contemporary styles. By this point, he was also ready to leave his job. He and his wife cashed in their retirement accounts and founded Coastal Spirits in 2012. The distillery received its licence in 2014, and Plummer launched on the difficult job of selling vodka, while scaling up the gin recipe.

The 860 square-foot (80 square metres) space that is home to Coastal Spirits fits the definition of a nano-distillery. Equipment, bottles, tanks and raw materials are packed in so tightly that Plummer sometimes has to move three things just to get to another. When people call asking for a distillery tour, he is generally willing to comply, but warns it is not a destination distillery. Plummer said, “I tell people the tour consists of standing in one spot and turning in a circle. You’ll see the whole thing.”

In 2015, Coastal Spirits launched Gin Farallon, naming its flagship spirit after a chain of islands outside the San Francisco Bay. The flagship is actually two gins blended together: one made from the “holy trinity” of juniper, coriander and angelica, and the other made with cardamom, grains of paradise, liquorice, lemongrass and fresh grapefruit zest.

“Think of a spectrum of London dry to contemporary, with floral and fruit at one end, and juniper and spice at the other. I wanted to kind of hybridise those,” said Plummer. “I wanted to taste the juniper and taste a little spice, but I wanted there to be some more floral character to it and wanted it to be more approachable.”

Treading dangerous waters, and returning to the spirit that started his distilling career, Plummer finally mastered the distillation of plums, which he uses for the third gin. Blackfruit Gin Farallon has an Eastern European-inspired, fruit-forward base with a botanical blend that leans more to a classic style. It is a flavour-forward gin with plum brandy balancing the juniper.