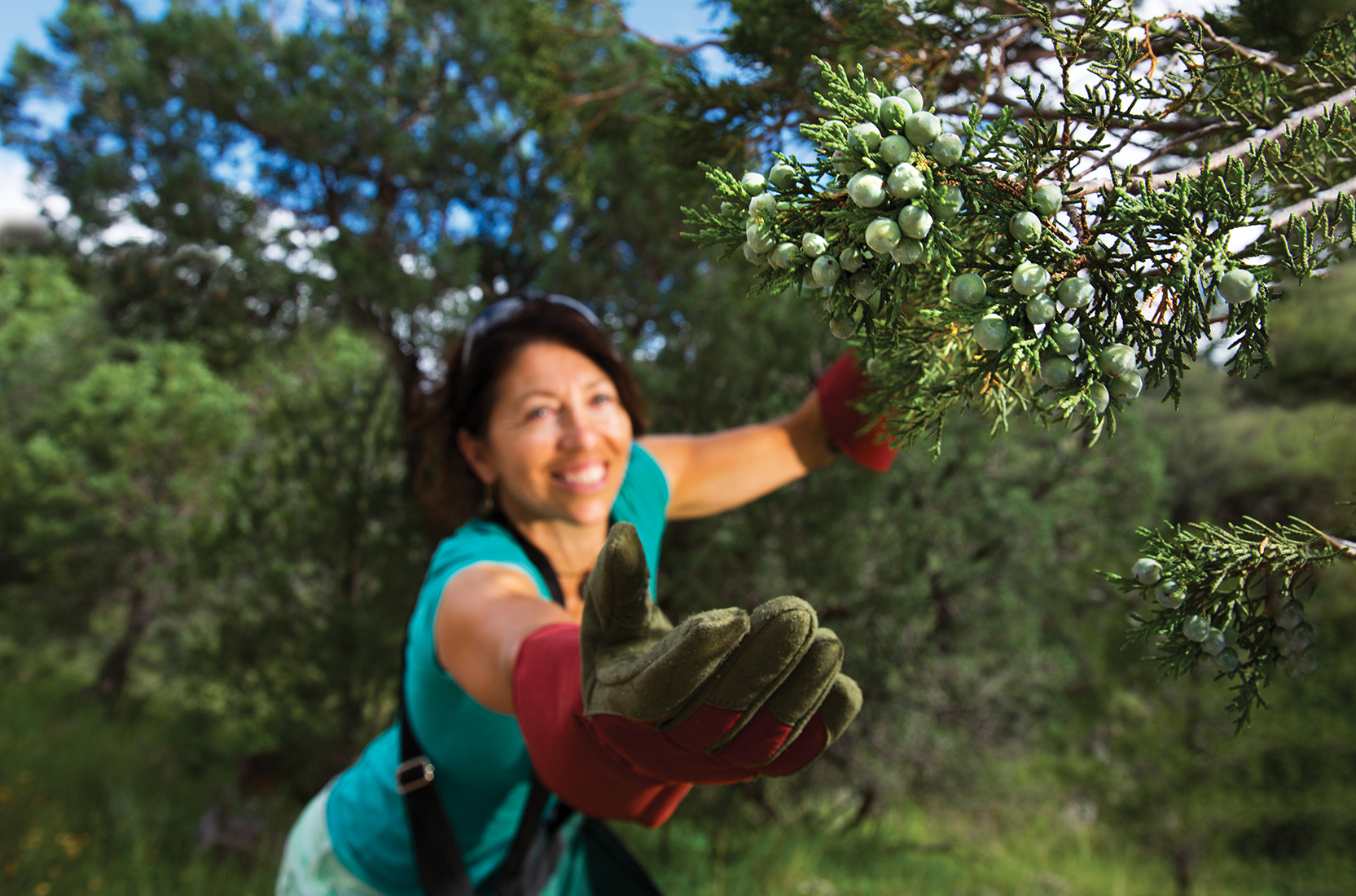 It sounds like a great idea: nature abounds with botanicals that can be foraged for gin. North America is home to many varieties of juniper. Why not make a wild-foraged gin? Could there be any truer expression of terroir?

Not so fast. Out of dozens of junipers growing wild in North America, only a handful are palatable.

Molly Cummings, founder of WildGins, rejected the local Ashe juniper (Juniperus ashei). “It is just not fun,” said Cummings. “It doesn’t taste good, doesn’t smell good and does not make a good gin.”

Cummings has become familiar enough with the trees that she has given them names, such as Skinny Minny, Fertile Myrtle and The Bounty. Thelma and Louise were named for the branches that hang over a small bluff, reminiscent of the cliff that Geena Davis and Susan Sarandon drove off in the movie. Each bottle of gin carries the name of the tree from which the berries were harvested.

New Riff Distillery also combines Eastern red cedar with common juniper in Kentucky Wild Gin. Co-founder and distiller Jay Erisman had a eureka moment when he discovered a local-juniper-flavoured chocolate. The revelation launched a gin recipe using berries foraged within a 150-mile radius of the distillery.

In addition to using four pounds of Juniperus virginiana berries in each batch, New Riff puts four pounds of wild-foraged spicebush berries into the pot to macerate overnight before distilling. Erisman harvests the berries from two plants in his backyard and has planted four more in the front, but this is a small fraction of the distillery’s annual need. “I am, however, careful to add a few Erisman-picked berries to every batch of gin,” he said.

California bay laurel grows extensively throughout the San Francisco Bay Area and the Oakland hills where Winters lives. Its aromatic leaves provide a fragrance familiar to mountains up and down the California coast, including Mt. Tamalpais, a coastal peak within view of the distillery.

“There was a picture in my head of how I wanted it to smell and taste, and that was exactly like walking in the woods on Mount Tam,” said Winters. “The intention was to paint a faithful landscape.”

Initially collecting in a backpack, the distillery crew now goes farther and uses a flatbed truck to obtain the other botanicals. They collect Douglas fir, coastal sage and fennel from private land in Anderson Valley, about 90 miles from the distillery.

Terroir is one of three gins that St. George Spirits releases. Dry Rye Gin is a step closer to jenever, with milder botanical notes and more presence from the base spirit. The Botanivore, which competes with Terroir for their best seller, is more of a meadow bloom than a forest trail.

Sustainability is a limiting factor on foraging botanicals for gin. Out of respect for the environment, Bently Heritage Estate Distillery in Minden, Nevada, dialled back its foraging program to include only pinyon pines from private land in the Sierra Nevada mountains. Alpine Gin is in extremely limited production and available only at the distillery. Describing Alpine Gin, co-founder and proprietor Christopher Bently said, “For me, this was walking through the mountains in the forest after rain, because it just brings all of those smells up from the earth with a beautiful bouquet.”

Dry Land Distillers of Longmont, Colorado, pivoted from wild foraging to urban collecting. Dry Land’s Native Colorado Gin sources all ingredients from within the state and uses three native junipers in the recipe; chief among them is one-seed juniper (Juniperus monosperma).

“The first trip into the mountains to find the plants raised concerns for us,” said Dry Land co-founder Nels Wroe. “Traipsing around hunting for plants is not a great way to treat the lands we love. We immediately turned to urban foraging, which has much less impact – and it set us up to have back-up growers available… Either we grow it in our own yards or we have enlisted the help of friends and family to grow it in their yards.”

Wroe tells a funny story of the first time he harvested bee balm, a botanical the distillery harvests from a friend’s bee-safe garden. Though he was not stung, a swarm of bees followed him to the car, some riding home with him. Wroe jokes, “Needless to say, these days I send my teenagers in to harvest.”

You can read more about juniper as a botanical here.