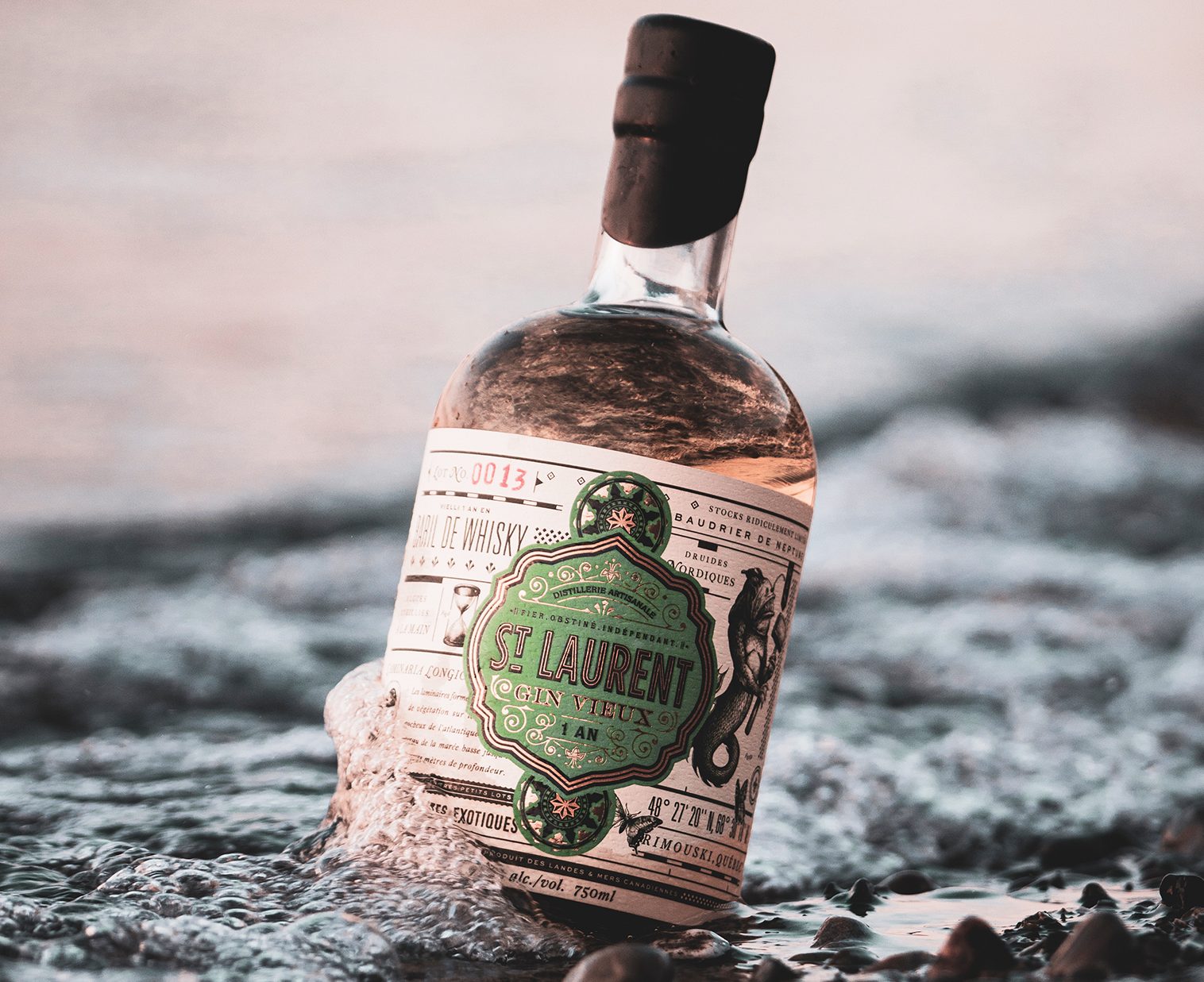 On 29 May, 1914, the ocean liner Empress of Ireland left Quebec City, en route back to Europe. At 1.38am, the ship collided with a Norwegian collier near Rimouski, Quebec, sinking the Empress in 14 minutes. Of 1,477 passengers on board, 1,012 perished. The survivors, taken to Rimouski, included ship’s fireman William Clarke, who miraculously had survived the Titanic’s sinking two years earlier. “I have done with the sea,” Clark told reporters.

Regrettably, he didn’t stay in Rimouski, though. In 1950, a fire burned much of the city to the ground. No one died that Red Night, but 300 homes, a church and a hospital were incinerated. The port city desperately needed a drink but lacked a distillery. It was 2015 before naval architect Jean-François Cloutier and Jöel Pelletier quenched Rimouski’s lingering thirst with gin they distil at Distillerie du St. Laurent.

Quebec’s gin appetite dates to the 1870s when John and Joseph G. C. Meagher opened Montreal’s Meagher’s Distillery. Jan Melcher’s distillery in Berthierville soon followed. Gin became a staple of large Quebec distilleries, including the LaSalle Distillery near Montreal. But by the turn of the 21st century, only LaSalle remained, surviving on the strengths of its Crown Royal Canadian whisky, along with a couple of cider makers that had made the plunge into distilling. Quebec-made gin languished until a downright inexplicable phenomenon changed everything.

In 2010, cider maker Domaine Pinnacle combined traditional botanicals with unique ones foraged in the province’s sub-arctic Ungava Peninsula. Sales of the resulting saffron-hued Ungava Gin quickly caught fire, putting Quebec firmly back on the gin map. Ungava’s success sparked a movement, but this time Quebec’s flourishing distilleries weren’t looking to revive the past. They’d rather sink than mimic Ungava. “Quebec’s gin style is about exploration because we don’t connect with old traditions, we tend to explore more than repeat,” declares Cloutier. Instead, Quebec’s distillery movement, led by Distillerie du St. Laurent, marched out on its own, creating gins that perfectly reflect regional flavours.

“Quebec is going in many directions,” adds Pelletier. “Most of the people running microdistilleries in the province never worked in a distillery. They are like Jean-François and me, regular people who enjoy gin and spirits. It’s passion and innovation that drive us.”

A boreal forest that covers about 900,000km2 of Quebec provides a botanical foraging ground as large as four United Kingdoms. Spruce, fir and pine trees blanket most of this area, along with birch, sugar maple and other hardwood and softwood trees. Capturing local forest flavours is debatably the main direction Quebec distilleries have taken as they explore various piney gins. Yet, despite having this bounty at hand, Distillerie du St. Laurent turned to the sea for its signature gin.

Jules Verne published his novel 20,000 Leagues Under the Sea around the same time that Meagher’s and Melcher’s were in construction, and Verne’s imagery inspired Cloutier and Pelletier. Their still, which resembles a 19th-century diving helmet with its gleaming copper-ball gin basket, resembles something Captain Nemo would use to pilot the Nautilus.

“I was designing the still with the manufacturer and it was looking very traditional,” recounts Cloutier. “Joël told me, ‘We’re designing the still?’ I said, Yes? ‘We can make what we want.’ Yes? ‘What about a big copper ball over it with a built-in gin basket?’ Yes! So, we designed it that way just because we could.” The still provides a link to Rimouski’s marine traditions as much as it does to Verne’s writing. “We play a lot and I really love the round curves of the stills. They remind me of early naval architecture with the classical steamship engine rooms and the steam pipe systems. It’s fun to work these shapes into the distillery.”

St. Laurent gin begins with a neutral corn base spirit that they flavour in a three-step process. First, juniper is macerated in the spirit for 24 hours before going directly into the still to be boiled with coriander seed, angelica root, cassia bark and liquorice root. “It’s a real pain to clean,” says Cloutier. But having to clean up the spent botanicals is a small sacrifice for rich flavour. Next, the vapours from the kettle journey through the gin basket filled with lemon peel, bitter orange peel, cubeb berry and grains of paradise. Local laminaria seaweed is then macerated in the gin for 10 days.

This long maceration allows the gin to extract all the minerals and salts, yielding a soft velvety texture while also tinting it sea-green. Each fall, they harvest 500kg of fresh laminaria off the shores of Rimouski, wash it, dry it, then crush it into about 50kg of small chips – a year’s supply. St. Laurent gin rewards Cloutier and Pelletier’s efforts with layers of herbal and floral flavours that swim gracefully across the palate to meet pleasing coniferous notes. And while citrus and pepper tones touch the flavour shores, a maritime brininess encrusts the gin from start to finish.

A nautical label, with its images of an incredible deep-sea journey, also reflects Verne’s influence. A giant octopus-like sea creature wearing a diving helmet combines the fantastic of Verne with 19th-century maps. “We wanted to acknowledge these traditions,” says Pelletier. “From the pot stills to distilling traditions, they combine steampunk with a tribute to the surrounding sea including the creatures under the water.”

Distillerie du St. Laurent officially added whisky to its offerings in the fall of 2020 as its stocks came of age. But unlike William Clarke, it is not done with the sea. The partners are planning to open a brand-new seaside distillery in the spring of 2022. They intend their new space to be a marvellous feast for the eyes – a feast best enjoyed while sipping St. Laurent gin, St. Laurent aged gin or a gorgeous citrus gin, each worthy of its own story.

Verne’s Captain Nemo once commented, “The sea is everything, it is the Living Infinite” and with St. Laurent Gin flying the Fleurdelisé, Quebec gin has resurfaced, unsinkable. And as for Cloutier and Pelletier? “We’re in this to have fun, explore new aromas, meet interesting people, grow old with our spirits and enjoy the ride.”

Read about another Canadian distiller here.