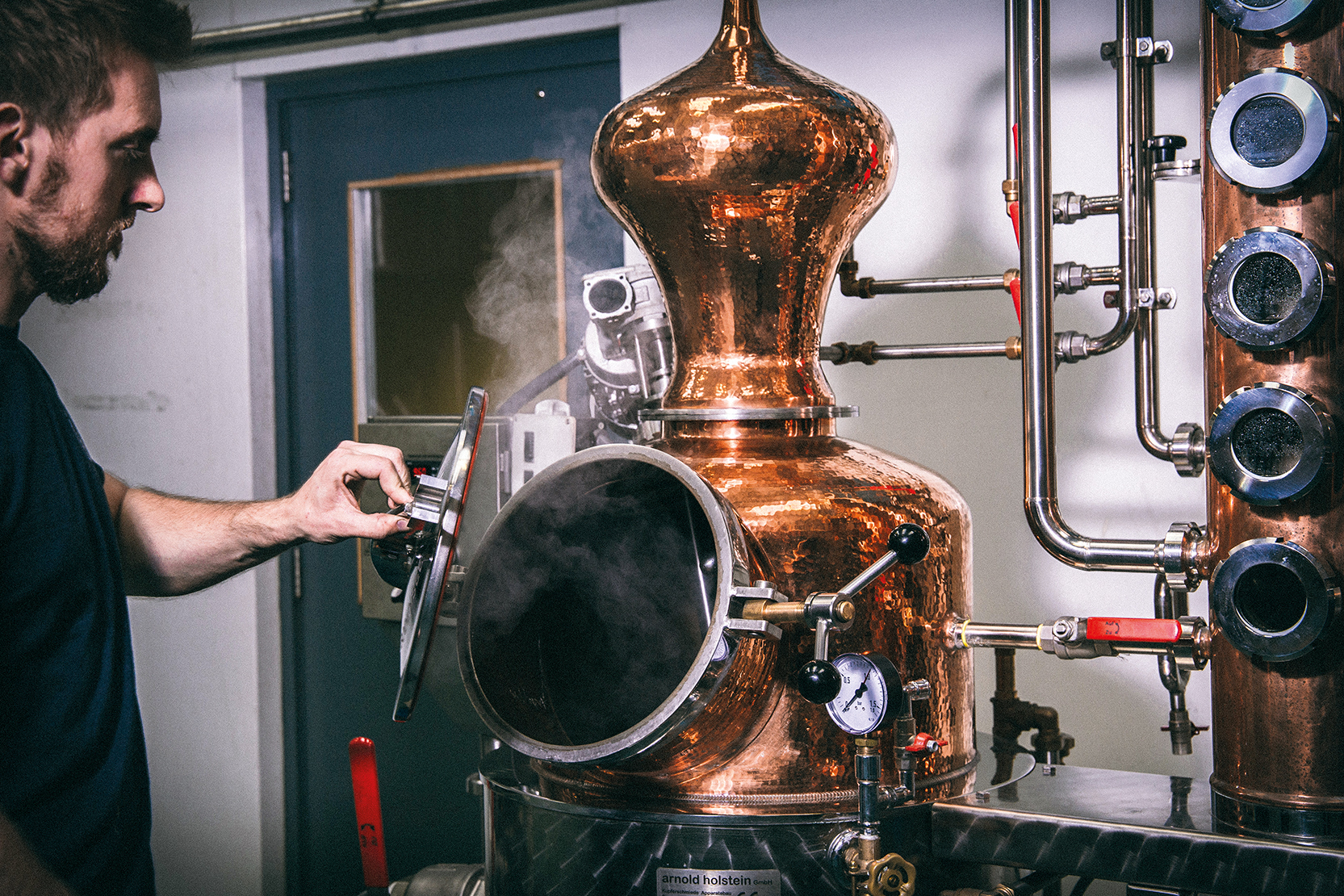 Among the rolling fields and hills of eastern Scotland, a clutch of distillers is bringing new innovations to the country’s growing gin scene.

When you hear the name Brewdog, the chances are you’ll think of beer – but the successful craft brand has been making spirits in Aberdeenshire since 2015. Its spirits arm, Brewdog Distilling, is based at the brewer’s headquarters in Ellon and takes advantage of the wealth of knowledge and resources its much bigger brother provides.

Brewdog master distiller Steven Kersley, who worked at spirits giant Diageo before joining the company in 2015, spent two years with his team experimenting and perfecting recipes before the distillery’s first products were released. “It is important that you laser in on what is important and what is of value, then throw as much energy at that as you can,” he says, “but in the early development process we actively encouraged silly questions and mad ideas.”

Its first gin, the deliciously juniper- and pine-heavy Lone Wolf, was released in 2017. Compared to other craft gin brands trying to break into market, the distillery team had a major advantage: they could place their product on the shelves of Brewdog bars up and down the country to gauge interest, get feedback and ultimately boost on and off-trade sales. However, despite this boon, there is no complacency in their sales and development strategy.

Steven says, “Being part of the Brewdog family is helpful. We find that customer conversations happen quite fluidly because we have an existing relationship because of the beer. With the spirits we are off-trade focused. Classically a brand is built in the on-trade and grown in the off-trade, but we have a really strong on-trade presence with the Brewdog community and we are working to expand that beyond Brewdog. A lot of our good working relationships exist in the off-trade. Tesco will be listing us this year and Asda has had us listed since 2019.”

As the base spirit for its gin Brewdog Distilling uses its own vodka, which is made with malted barley and wheat and the same type of yeast used in its flagship beer, Punk IPA. The distillery hosts one of Europe’s tallest rectification columns, standing at 18m, and also uses bespoke triple bubble stills designed with still maker Arnold Holstein (the first sketches were apparently drawn up on the back of a receipt).

Steven explains that paying attention to the “nuances of flavour” in vodka has helped to improve the spirits. “It was trial and error. We had a lot of thoughts about how we could do it with raw materials, the grain and the yeast, and the distillation process.”

There is also a 50-litre pilot still used for new product development. It is here that
the distillery’s first flavoured gin, Lone Wolf Cloudy Lemon, was created – a chance experiment which resulted in a lucrative product.

“At the time we were thinking about the Cloudy Lemon gin, early last year, every man and his dog was making a coloured gin or a flavoured gin,” says Steven. “I had a real reticence to make a coloured gin without any of the authentic processes behind it. Then one of our distillers brought back some limoncello from his home country of Italy and we decided to mix it with our gin, and it worked really well.

“We took our gin and macerated it with fresh lemon peel for six days, which turned out to be a nightmare – we use 17kg of fresh lemon peel for each batch, but we get a lovely lemon peel aroma. We said we would do it as a summer seasonal, but it was such a success that they wanted to list it. We have been struggling to work out how to scale it – we’re going to see about buying an industrial peeler – but it was a commitment we made from the outset, that we wanted to make spirit from scratch.”

The latest Lone Wolf expression, Cactus and Lime, was released in May to coincide with the Mexican national celebration of Cinco de Mayo. It’s a zesty number packed with lime juice and cactus plant, which adds a watermelon sweetness. Later this year Brewdog Distilling will be releasing its first gin advent calendar; featuring four gins from the core Lone Wolf range and eight new expressions distilled exclusively for the calendar, it sounds like a must-buy for Lone Wolf fans.

Steven says that Brewdog Distilling is hoping to shift 95 cases of spirit – almost 40,000 litres – in 2020, with year-on-year sales already up 270 per cent by March. “I have a strong sense that we are going to have a good year,” he says. “Drinking habits will keep changing over the next few months with Covid-19, but that is an adjustment everyone is going to have to make.”

WORKING WITH THE LAND

The Arbikie estate in Aberdeenshire has been farmed by the Stirling family for generations – but John and brother Iain are working day and night to put the estate and its award-winning distillery at the cutting edge of modern spirit-making and agriculture.

The Arbikie Distillery was built in 2014 and now makes gin, vodka and rye whisky (the first produced in Scotland for more than 100 years). John and Iain are also building a visitor centre, perched on a slope beside the distillery, which is set to open this Autumn and will enable visitors to learn more about the distillery’s single-estate techniques and taste its spirits.

“When we set up the distillery, for us it was all about single-estate, single-farm – there is virtually no one who does it. That makes us very sustainable,” says John. “We do regenerative farming – putting things back, minimising any kind of bad input to the soil. We use GPS farming which means we can plant anywhere to within 2cm accuracy, and that allows us to know exactly what is going on with any part of the field. We do have organic fields, but we feel regenerative farming is more commercially viable and better for the planet.”

Arbikie made its first vodka – from its own potatoes – in 2014 and laid down its first whisky in 2015. These were followed by two gins: Kirsty’s Gin, made using its potato vodka and botanicals selected by master distiller Kirsty Black; and AK’s Gin, which uses a base spirit made with wheat grown on the farm. Then earlier this year, the team made history by releasing the world’s first “climate positive” (carbon-negative) gin.

Nàdar Gin was the result of five years’ study and research by Kirsty Black, in a PhD studentship between Abertay University and The James Hutton Institute. It is distilled with a neutral spirit made from peas; unlike grains they don’t require nitrogen fertilisers, eliminating the harm these cause to soil and waterways, and they also help to regenerate soils in rotation between crops that need nitrogen fertilisers. Per 70cl bottle, it has a carbon footprint of -1.54kg.

Kirsty explains, “I looked at all legumes – lentils, peas, chickpeas and beans – but for here I had to focus on what would grow in Scotland. Peas were and still are grown in Scotland, they are big business.

“We will continue to look at reducing our footprint. As a distillery we get to try things. Other distilleries are set up around targets, but here everyone is open to giving it a shot.”

John says there is more experimentation to be done with legume-based spirits. This is alongside the planting of heritage grain varieties for experimentation with Arbikie’s whisky. “Nàdar Gin is miles ahead of anyone else and we know we can do so much better,” he says. “We put out an experimental batch which was not made from our own peas. We were trialling different varieties to see what works best and we are planting our own peas this year.”

The distillery is approaching complete self-sufficiency in its gin-making operation. As well as using its own potatoes, wheat and soon peas for base spirits, it is also set to start harvesting its own juniper berries. After disease wiped out much of Scotland’s juniper stock, the authorities approached the Stirlings about growing the plant on their land. They agreed, and John says are now some 2,000 juniper plants on the estate.

As with their farming operation, the Stirlings want to keep sustainability and agility at the core of the distillery. While this will limit volume growth, John says keeping their “field-to-bottle” ethos is paramount.

“Undoubtedly in the past 20 years we have been too driven by money and profit rather than the greater need, particularly in farming and the drive for lower food costs, but time is running out for farms and farmers that do not think about the long term,” he says. “An understanding of your environment helps to improve everything and helps you to minimise any kind of climate change.

“The distillery has driven what we grow and how we farm. Would we have got there as fast without it? Probably not.”

In the village of Carrbridge, in the shadow of the Cairngorm mountain range, one of Scotland’s youngest distillers is making a name for his homegrown gin brand.

Jack Smith founded Cairngorm Gin in 2019 at the age of 21 and has slowly been building the profile of his micro-distillery. His career began in catering and saw him work with leading chefs in Scotland and Ireland, but he always harboured a desire to return to the Scottish Highlands. His family has lived in the Cairngorms National Park for generations and he has tried to showcase the best of the area in his gin.

“I’ve always liked gin and Scottish gin is booming right now. We were lucky with the name, that no one had already claimed it – it was a good opportunity,” he says.

Jack believes his was the first gin distillery in the UK to use cloudberry as a botanical. The small amber berries, likened to raspberries in flavour, are common in Scandinavia but also grow in the Cairngorms. The spirit also contains Caledonian pine needles in its botanical mix, which are foraged in the national park. The London dry-style gin is made with a grain neutral spirit and uses water from the River Spey, which the distillery collects and filters itself.

The Cairngorm Gin distillery is kitted out with a 50-litre copper pot still named Ginger – named after Jack’s late grandfather, who was partial to a gin and tonic – and has a bottling facility on site. Distillations take around seven hours – a slow process for a small batch, but Jack explains, “We think the slow distillation makes the spirit smoother. After it’s distilled we leave it for a week to settle because it is quite sharp at first. We are only capturing the hearts from our distillation; our motto is ‘From our hearts to your home’ so it plays on that fact.”

Jack has kept distribution local so far, stocking in a number of on and off-trade venues in the Cairngorms National Park, where he says the gin is going down well with customers. He hopes to eventually move the distillery into new, bigger premises that could also accommodate a hospitality offering.