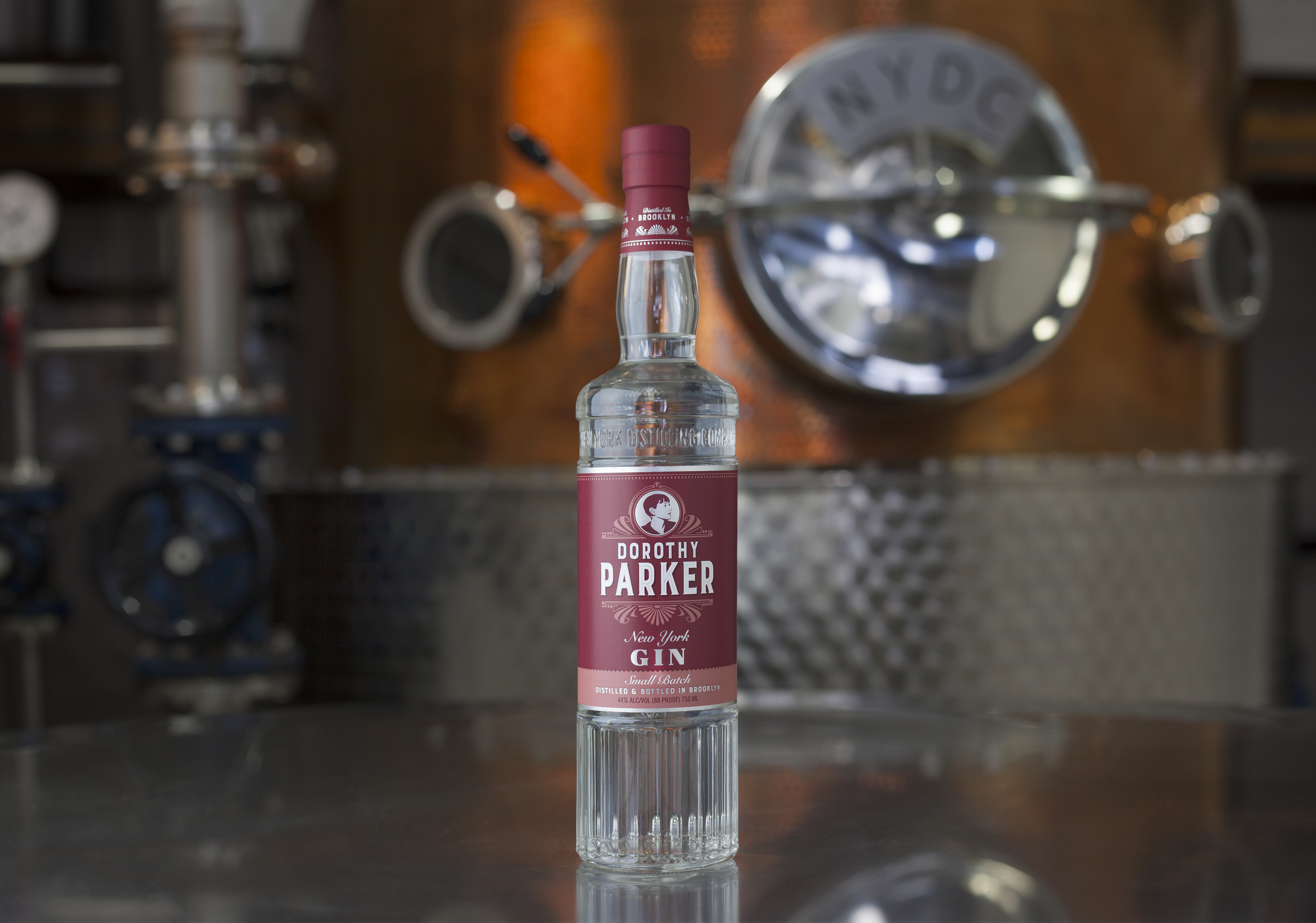 If urban distilleries are your thing, then you are in for a treat as we venture across the pond and through the doors of New York Distilling Co. (NYDC). Located next to a fire station in Brooklyn, the distillery has been open for more than eight years, during which time its team has perfected its rye whiskey range and, of course, the product we all know and love: gin.

In the 1990s, co-founder of NYDC Allen Katz began to engage in the food and drinks industry that was booming in the city, with a particular focus on cocktails. Over the years this intrigue has been nurtured and expanded into a love of all things spirits. To celebrate this fully at NYDC, the team created their very own distillery bar named The Shanty. Its menu offers a fantastic array of spirits and cocktails, including Ragtime Rye and Dorothy Parker Gin, both of which were made in the operating distillery you can see from your bar stool.

A trip to the distillery bar will easily demonstrate the reason for the success of this liquid: there’s a true understanding of flavour. As Allen explains to me while we’re sat in The Shanty, “Long story short, I ended up getting a job in Italy… we went to the bakery every single morning, because that’s when it’s fresh, we went to the butcher when we needed meat and the fishmonger twice a week. After that experience, all of a sudden, I paid a different type of attention to the farmers’ market, I wanted to engage with the farmers themselves.”

This experience formed part of a professional direction for Allen, although at the time it was happening he wasn’t exactly sure what that would manifest as. Allen adds, “I knew that I wanted to become part of this and that I had the utmost respect and admiration for people who made things.”

The years that followed that realisation shaped Allen’s love of spirits, alongside a New York-centric cocktail culture that was born out of the East Village that he lived in at the time.

“For me, to get to the point of our distillery, it was through that early era of experiences and brand work that I was invited on my first of three trips to Plymouth Gin,” Allen continues. “It was the ‘holy s**t’ moment as I met Sean Harrison for the first time ever. What I was doing on the trip I had no idea, but I was grateful to be there.”

It was here that Allen encountered his first urban distillery, setting in motion a trail of events that would eventually lead to the creation of NYDC. He explains, “I’m looking down the path and there’s Blackfriars Distillery, and I went out of my mind. Thunder bolts and lightening and ideas. That was the zeitgeist moment for me. It was my first introduction to navy-strength gin as well. Obviously Plymouth’s Navy Strength Gin has been around for a long time, but we had that as our base point. We could tailor something as we were trying to make a smooth gin at 57% ABV.”

For several years this become Allen’s driving force. Between working and living his life, he couldn’t stop coming back to the concept of an urban distillery. This ultimately led to a mutual friend introducing him to the man who would go on to become a co-founder of NYDC, Tom Potter.

“Tom is perhaps most well-known as the co-founder of the Brooklyn Brewery,” Allen says. “We had some great conversations… centred primarily around what a distillery would look like in Brooklyn and what we would make.” When it comes to creating their Dorothy Parker gin, the team buy in neutral grain spirit. As Allan explains, “We want to be cocktail people. Judge no one else. If you’re going to make your own product I’m ready to give you a hug and a kiss on the lips. I am filled with admiration for people who will stick themselves on the line and say, ‘I’m going to make something’. ”

In knowing that an inherent part of the drive and ideas that formed NYDC was the cocktail methodology in Allen’s past, present and future, the team strives to create a gin that is up there with the well-known brands people go to for a great Martini, Negroni, Gimlet and, of course, a G&T.

Allen elaborates, “Can we stand behind our product and say, ‘Yes, I love this gin, put it in the coffin with me when I go’? That’s how vital this feels to my being and that is what we strive for.

“That’s the fun thing about gin: as a gin drinker you may like one gin for a gin and tonic and another for a Martini, depending on the ratio and how you’re using bitters and the garnish. There are so many gins now that experimenting may be fatiguing, but we wanted to be creative without being esoteric, while remaining cocktail-focused on the gin and making sure it is consistent from batch to batch.”

Of course, creating a spirit people love and will return to is the main challenge, but another important factor is a strong reputation within the industry. “We knew we’d at least get the first sale in New York. We’ve built up good will through our livelihoods for the past 20 years and have good relationships that create a strong foundation. However, it had better taste the same from batch to batch, otherwise people aren’t going to order with you again. We work hard for that consistency on our Dorothy Parker Gin in particular.”

During our afternoon spent in The Shanty, we moved on to discussing the perception of the US gin market, particularly from those based in the United Kingdom. With such a heavily saturated market of craft gins in the UK, it is easy to forget that we are not the only place in the world to have successfully embraced all that gin can offer to our taste buds.

When discussing the question, often posed to Allen, of whether he sees the gin market taking off in the US this year, he explains, “It has really been a decade. We’re not as educated and knowledgeable, particularly from a consumer standpoint, but we have a mass of educated tradespeople at bars, restaurants and retailers. That is now the frontline for education on all of these products, gins included.

“What the UK has, I would assume, is the most educated collection of consumers of gin on the planet. We’ve been to wonderful consumer events in London… as an American it may sound silly, but it’s a very stereotypical, jaw-dropping experience for me to be there and have people queue up to wait and taste my gin. It was unfathomable.”

Looking back to a decade ago, there would be approximately 12 gins on the shelf at a wine and spirits retailer in Manhattan. However, if you were to take a trip into one today you are looking at 75 to 80 bottles, which includes a variety of styles. For distillers such as NYDC, one of the biggest challenges – but also opportunities – they face is educating the consumer on what they are getting in a bottle.

The team at NYDC still have their eyes on the prize when it comes to making the consumer fall in love with gin. Allen explains the thinking behind their Dorothy Parker Pink Gin creation: “I’m told that 29 per cent of all gin consumed in the UK is pink, so we have taken our flagship gin and gone to great effort to infuse them with rose petals.

“For one, we very much like the texture and flavour; with every respect, I’m going to bet that a lot of the pink gins out there are artificially coloured or flavoured. We were adamant that we were going to come out with a product that we wouldn’t release to the public unless we could do it naturally.”

The resulting Dorothy Parker Pink Gin has been infused with both pink rose petals and elderberry, which happens to be one of the botanicals in the original gin. Allen adds, “What we found through a lot of testing was that the elderberry is the colour-stay ingredient. If we just use rose petals, it oxidises pretty quickly. That’s fun and that I would say is cheeky.”

It is through experimental creativity and refreshing honesty that this urban distillery is setting itself apart from the crowd in the US gin scene. It’s enticing to see a distillery team that truly knows itself and I know I can’t wait to head back for a cocktail or two.

0 comments on “NYDC’s Dorothy Parker Gin: A spirit about town”