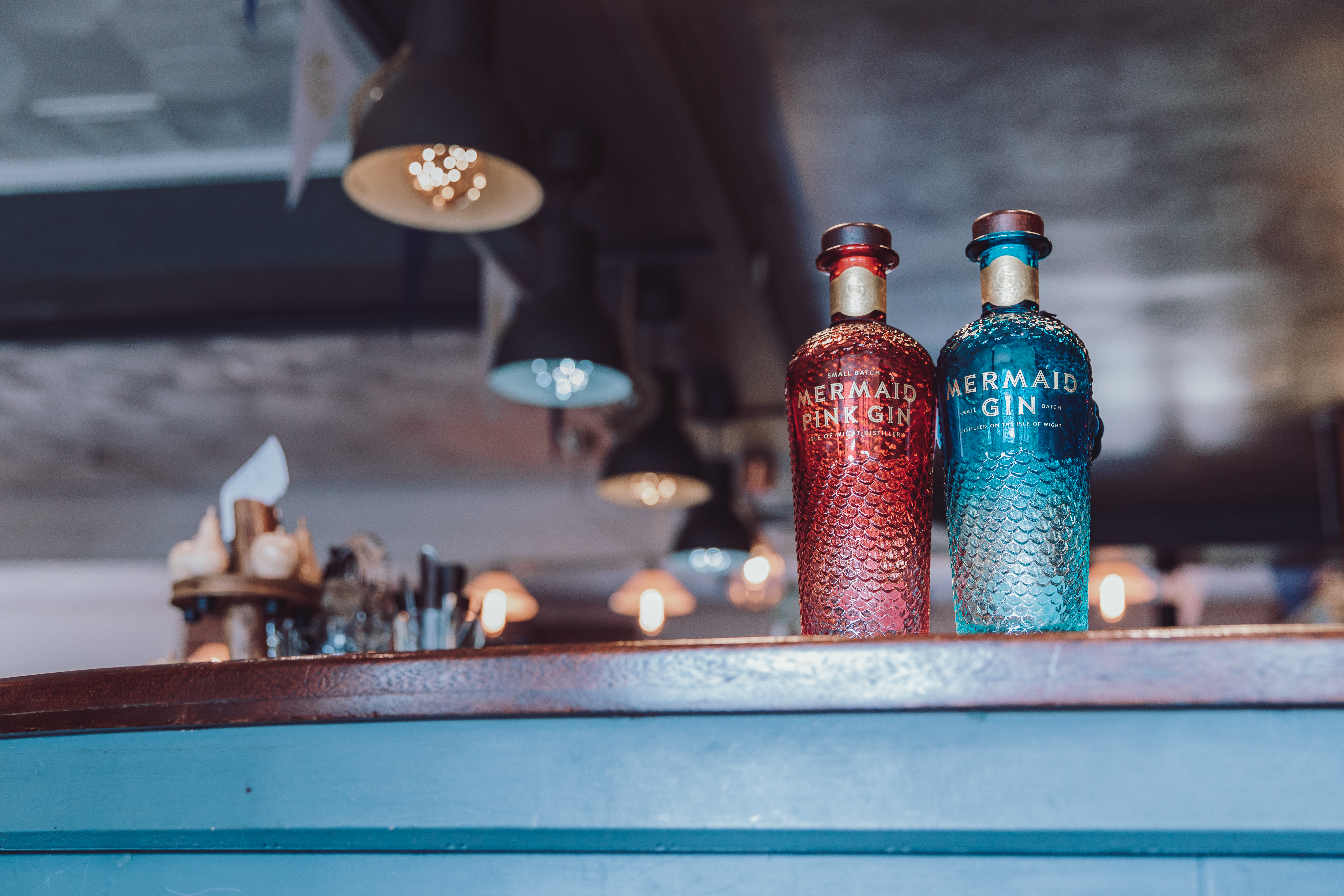 In the latest in our series of interviews with distilleries that make the most of their local environment, we speak to the Isle of Wight Distillery about its tidal wave of success.

Imagine running your own gin distillery, with all the joys – and challenges – that such an operation brings.

Now imagine trying to set up that distillery on an island, where miles of open water separate you from the nearest other landmass. Do you see the wave of potential logistical pitfalls rising in front of you, threatening to sweep you and your distillery dreams out to sea?

This wasn’t enough to daunt the founders of the Isle of Wight Distillery, producer of the now-world-famous Mermaid Gin.

Situated on the outskirts of Ryde, the distillery was founded by Xavier Baker and Conrad Gauntlett in 2014. After initially laying down whisky barrels, the duo turned to gin distillation to tide them over until the whisky reached maturity.

They have since taken the craft gin scene by storm, proving it is possible to make a global impact no matter how humble your beginnings or how secluded your home.

For Ginnie Taylor, sales and marketing manager at the Isle of Wight Distillery and wife of an Isle of Wight local, the location has more pros than cons.

“We are the first and only distillery on the Isle of Wight and we definitely consider that to be more of a positive. We have had and continue to have a lot of support from the locals, and it is also making a bit of history,” she says.

“Being on an island we do have limitations in some things. Certainly at the moment we are facing challenges in transportation, but really it is fine. We have got a good network of distributors. We do have that stretch of water which makes travel a bit more difficult, but we have not found that it impedes us.”

When they founded the distillery, Xavier and Conrad’s mission was to create a sustainable operation working in harmony with its environment (both terrestrial and marine), from the choice of botanicals to minimising plastics and energy use.

Ginnie explains, “Our key botanical is rock samphire that grows on the south coast of the island, right on the shore line. It is nicknamed locally as ‘mermaid’s kiss’. I think we are quite lucky where we are. There are 10 botanicals in the gin and three are grown locally: rock samphire, elderflower and Boadicea hops from the [Ventnor] botanic gardens.

“Our strawberries for the Mermaid Pink Gin also grow on the island in the Arreton Valley: they’re the wonky kind that are not pretty enough for a cream tea.

“One of the co-founders who came up with the recipe wanted to use local botanicals if he could and all our spirits use botanicals from the island. Ultimately this is where we are, so why not use the abundance of ingredients that we have?

“There is a micro-climate here as well which is really interesting. Particularly at Ventnor, on the south of the island, you get certain things growing which you would not get elsewhere.”

The Isle of Wight’s Mermaid Gin has made quite a splash, not just in the UK but in markets around the world.

With its distinctive bottle – the result of an eco-conscious redesign in 2019 – and its hyper-local back story, it has attracted international attention. It is now available on, or in talks with, every continent except Antarctica and is also available in travel retail outlets.

Ginnie says, “We have nationwide distribution with Marks and Spencer and the Co-op, and we will be released in Tesco in mid-April. We work with all the usual suspects [in distribution] – Matthew Clarke, LWC Drinks, Nectar – so we are available nationally. We also work with Master of Malt and distribute directly through them online.

“The vast majority of our team is based on the island, but we do have a couple of sales teams on the mainland.”

Amid the Covid-19 crisis, which has shut down the UK on-trade and dealt a blow to sales, the Isle of Wight Distillery has joined many other distilleries in switching production to hand sanitiser. Called Wight Wash, its sanitiser is being made available to people in need on the island.

Ginnie says, “We are confident that we will get through it [the coronavirus crisis], although it has been a really difficult few weeks with the on-trade taking the hit that it has.”

0 comments on “Isle of Wight Distillery: The making of Mermaid Gin”